In some of the paddocks here the cattle rely on springs and gullies for their drinking water, which is not ideal because they make a great mess stepping into increasingly muddy areas to get to clean water and are at risk of getting stuck.  We've intended upgrading the supplies to such paddocks for some time, but because it takes quite a lot of alkathene pipe to reach some areas, it has been a slow process.  Over the last couple of years the water running down out of the hill in the Pines paddock has been drying up completely when there's been no rain for a while, so it needs at least one trough. 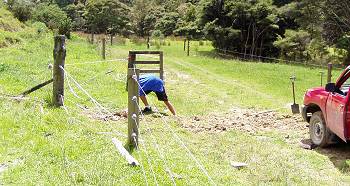 Looking at the aerial photograph of the farm and the associated map, we planned the shortest route to provide water to the Pines and as many other paddocks as we could, then Matthew and Stephan set about digging a trench to put a saddle fitting on the main water line, to feed the new branch.
Then we discovered that our water source can't be quite as high as we had imagined and the water would only reach half-way up the hill!  It seems a very long way up when one is struggling through thick bush.

So Stephan went ahead and installed the trough for the Pines paddock at the bottom of the hill and refilled the trench and we returned to Plan A, which involved slightly more alkathene, but less of a climb to get water to the other paddocks in which we wanted it. 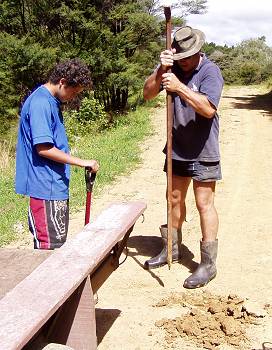 Having installed the water system many years ago, Stephan has a reasonably good idea of where the pipe runs underground, so usually doesn't have to dig very far to find it.  It was originally pulled into the track with a mole-plough behind a large tractor and rarely needs digging up, unless stray rocks or other large debris make their way into the line somehow, usually when the river is in flood.

Once the pipe was exposed, Stephan placed the saddle fitting loosely next to its intended position and drilled a hole through the pipe.  The supply had been disconnected 'upstream' but there was still considerable pressure, so he had to move pretty quickly to avoid a severe wetting!  Eventually the pipe emptied and actually sucked all the muddy water back out of the hole, which made the job somewhat easier than it might have been.
Then the saddle was tightened onto the big pipe, the fitting and smaller alkathene pipe attached and we went off to see if the water was getting as far up the Middle Back paddock as we required. 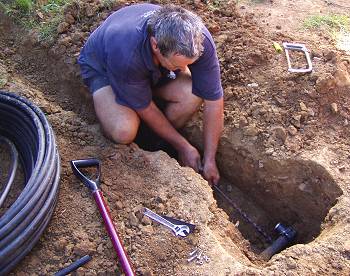 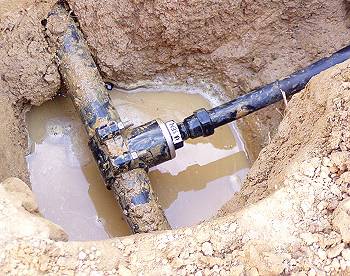 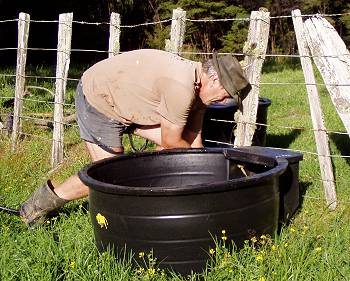 Success!  Stephan brought two troughs home from town (the smaller one may be later replaced, but was the last one available anywhere in town today) and he and Matthew transported them up and over the back of the farm with the tractor.  Stephan installed one in the Middle Back paddock and one through the fence in the PWHS, which has another at the bottom end as well.  Both paddocks have had animals stuck in them: the steer so long featured over the last couple of years in the PWHS and old #32 became bogged in the swamp at the bottom of the Middle Back paddock years ago when she was still feeding her first calf.  I can't be sure that any of the animals became stuck because they were trying to reach water, but it's a distinct possibility.  The provision of clean, fresh water in every paddock is desirable in any case.

We've spent some time over the last couple of days giving most of the calves their booster vaccinations and inserting their secondary TB-scheme tags.  We've normally not tagged them until just before sale time, but this year I'll be able to keep so few of them, that it seemed sensible to do them all together now.

Otherwise my days consist of trips out to gaze at and wander amongst the insemination cows, looking for any sign at all of impending oestrus, of which there's been little.  I think it's just too hot!  Every now and then I bring a mob in and replace the indicators on their backs and as the mating season progresses, fewer of those on the cows with the bulls are operated, since most of the cows are already pregnant.

Matthew went home today and whilst up at the airport, I found a couple of stray tourists called Kate and Russ, and gave them a lift into town.  I suggested they might like to come out for a visit to experience a bit of real New Zealand, but perhaps they found something they thought more entertaining, since I didn't hear from them again.  Maybe they thought I was some weird axe-murdering tourist collector ... 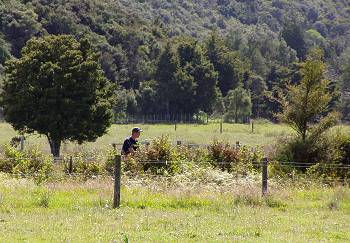 When I arrived home, there were a large number of people related to Stephan, come with buckets and tongs to pick blackberries.  I even let them have some of Stephan's special reserved jelly-making picking area.

It was very sunny and hot and I think, as usual, more blackberries left the farm inside people than inside buckets!  Certainly there were some very purple faces, of all ages!

Last night I noticed that Quilla 14 was probably coming on heat - bull #26 was looking very interestedly in her direction from across the lane and she was sniffing the other cows more than usual.  This morning she wasn't obviously doing much at all, and I couldn't really decide which part of her cycle she was in, nor could I afford to miss this heat.  Bearing in mind that she has now passed the time within which she can produce her next calf within a year of the last one, I decided she could jolly well go to the bull and he could sort it out!

I came back a couple of hours later and could find no sign of the cow, but the bull was happily grazing with the others.  A bit of hunting around found #14 hiding out in the river-bed, grazing the banks, looking hunched and uncomfortable, with some slightly blood-stained mucous dripping from beneath her tail.  I think she's alright in having no extreme damage done, but returned her to the insemination mob and a quiet rest for the next few hours.

Several of #26's cows have passed their return dates so are presumably pregnant.  For ease of management I drafted eight of them out of his mob and sent them to the back of the farm to join the cows with #20.

#26 is looking rather interested in Isla today, grazing exclusively with her.  As an inseminator of cattle, it would be exceptionally useful to be able to smell what he can and not rely only on the more overt signs of heat.  Not that I wish you to imagine me wandering around sniffing cows back ends, ok?

Whilst moving the insemination mob, I drafted out Flora 15 and the twins Ingrid and Ida, to go off to the bull.  Flora and Ida haven't come on heat yet, as far as I have been able to tell, and they, like #14 have passed the acceptable time for getting back in calf, so I shall leave the bull to detect their next heats.  Ingrid has had two inseminations, but on both occasions I did not succeed in getting the inseminator right through her cervix to deposit the semen in her uterus, having come up against an apparent blockage, or a very tight band of cervical gristle!  Time will tell if I left it close enough.

I moved the five cull cows and their calves from near the yards back out to the back of the farm at lunchtime and as I watched them walk up the lane, I suddenly decided I really couldn't stand it and would simply have to rescue Fuzzy from imminent removal from the herd.  For all that I probably ought to cull her for her presumed genetic defect (rat-tail syndrome), I really like her as a cow.  She produces very nice calves which grow well and have nice conformation and the only strike against her is the quality of her hair (which doesn't matter much to me) and that of some of her calves (which possibly lowers the prices I might receive at the yards).  The degree of the effect of the rat-tail defect on her calves' hair is not too great - they go bald for a few weeks across their shoulders and noses, then regrow adequate hair to protect them from sun and cold and there's a 25% chance (as far as I can calculate it) of getting an ordinary-haired heifer calf again.  There has already been one, but I sold her without giving it a great deal of thought at the time; I'd quite like to produce another.  So Fuzzy has one chance to conceive and if she does she can stay and if not, she'll go off with the other four on a truck, once their calves are weaned. 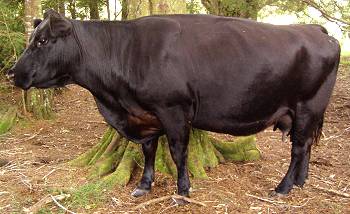 Sometime in the early hours of this morning, Isla and #26 got together and today she looks quite unperturbed!  Her faithless swain has gone off with some other floozy - Fuzzy!

Spice is one year old!