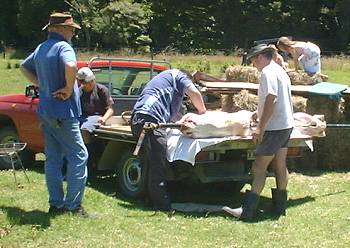 The day of the big party dawned brilliantly sunny and clear!

We carried on getting things ready, people turned up to help collect fire-wood for the bonfire and at about lunch-time Stephan got the spit fire going and Nick arrived to help him get the sheep ready to go on.  Stephan had covered the sheep with a marinade when he hung them up last night and now he and Nick inserted the spit pole and poked fresh Rosemary and garlic into the flesh, before hoisting the whole lot over to be connected to the little motor and have the coals shovelled in to begin the cooking process. 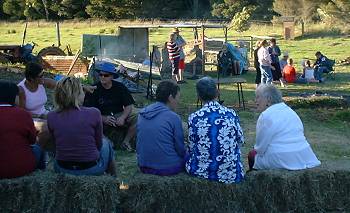 Throughout the afternoon people arrived, some putting up their tents out in the paddock, going off for a dip in the swimming hole, sitting in the shade with a cold drink and Nick stood around in the sun cooking the sheep and the back of his neck!  (We decided in the end that he was rather overdone and that we should definitely only eat the sheep!)

Eventually the sheep were deemed ready and the first was taken off the pole and carved up for the assembled company, who now numbered around 65!  The meat, in our opinion, was perfect - just that touch of pink in the middle for those who prefer their meat cooked to preserve its quality and the rest to varying degrees of done-ness, to suit all tastes.  However, we'd obviously overestimated the appetites of our many guests and fed everybody from the first sheep!  The second, larger one, remained on the spit, turning over reducing heat, to be removed to a higher place later in the night. 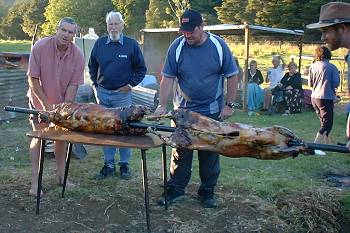 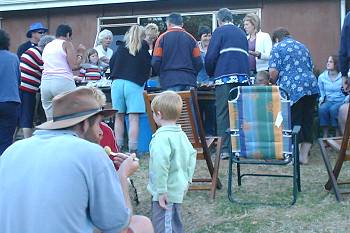 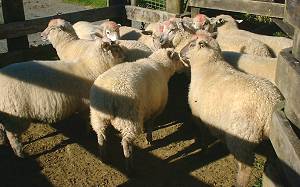 First thing this morning we had to deal with sheep - firstly to cut up and freeze the meat left over from last night, before the sun came up over the trees and the flies found it.  Then we had to get the remaining lambs ready to go off on a truck at 8.30am!  One of them decided the best way out of the paddock was through the fence, rather than the gate, so she bought herself a longer life as a result: I didn't want to send an animal which might be downgraded for bruising!  I was quite pleased to have a good reason to keep her really, since otherwise we have no more quality eating sheep left (other than Bendy, who has thus far escaped all other fates, and I don't think I could personally face eating him). 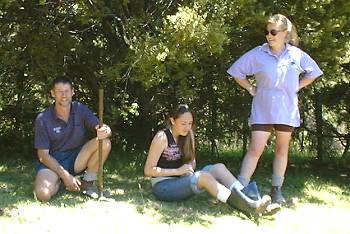 After Stephan had served everyone who'd stayed for the night with bacon and eggs, or his wonderful Muesli, for breakfast, we said goodbye to those who needed to go home and took Lesley and Len, for whom this was their first visit, for a walk out around the farm.  The two of them insisted on taking implements for weed-control with them, so we delightedly watched them grubbing thistles and pulling ragwort as they came across it.  The day being as clear and sunny as yesterday, we all got pretty hot by the time we reached the highest point on our walk, where some of the party collapsed and others stood happily under the trees, while we waited for the cattle I was calling to come up to the gate. 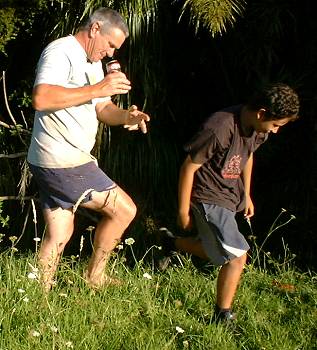 This evening we took some rather too-old eggs and bits of left-over cooked mutton fat and fed the eels in the river.  Matthew found some nylon fishing-line onto which he tied a piece of the fat, and threw it in to the eels.  As soon as one had bitten into it, he was able to pull on the line and swing the eel up onto the bank - it took a couple of tries to get the hang of how to do it before the eel let go, but he caught a couple of them and we had a good look at them as they squirmed around on the grass.  Stella, who was sitting on my knee, was not very impressed and said she'd like to go home, please!

I'm not entirely sure what was going on in the photograph: are they running away from the enormous eel which took exception to Matthew's tricks? 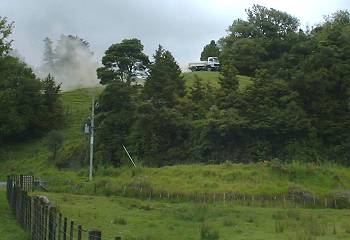 We've been waiting for several weeks to get our fertilizer spread: every day there's been far too much wind!  But this morning was calm and fine and the ground dry enough for the truck to get up the steepest hills, so Ryan came and did the job.  I had to move some of the cattle around to enable paddocks to be covered and Stephan went with Ryan in the truck to make sure he could get everywhere he needed to.  I used to go out in the truck during the spreading, but apart from finding it necessary to have cast-iron structural undergarments to provide some comfort during the journey around the farm, it occurred to me that it was better for Stephan to go, so he could see where the tracks needed to be improved, or cleared.

As the truck came down past the house, ready to go over the road and up around the hill paddock, Christine indicated her willingness to go for the ride.  I guess there's a lot to be said for ignorance!  Being in the cab of that truck as it travelled up, along and down some of those slopes must have been hair-raising!  But as Ryan apparently said, he doesn't go to work to roll his truck over, so it's no doubt much safer than it sometimes feels. 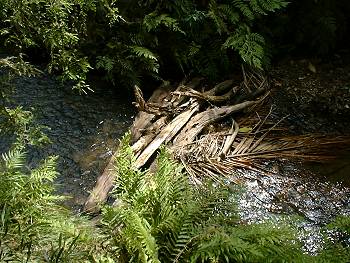 Christine went to work with Stephan this morning, so Matthew spent part of the morning building a dam in the river.  This bit of the river turns around what is virtually the bottom of our garden - well, it might be considered the bottom of our garden with a lot of imagination and with your eyes half closed after a couple of wines.  Suffice it to say it's not far away from the house, so if someone were to fall in or have some problem, their screams of distress could be heard by an alert adult. 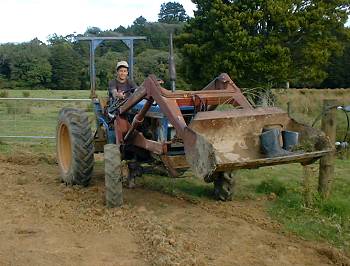 Later in the day, he and Stephan went out to work on the tracks around the farm, which mostly involved Matthew sitting in the bucket at the front, although he was pretty quick to assume the driving seat as soon as I appeared with the camera and they stopped for a few minutes. 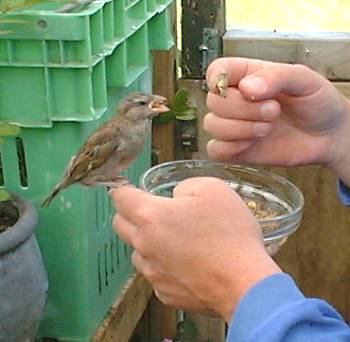 Two of the sparrows have decided to feed themselves now, but one continues to wait for me to offer it food.  When I whistle to it, it flies to sit on my finger while it dines.  The cat, Foxton Beach, showed great interest in stalking the birds when they flew down in front of me one morning, so I spent a few minutes having a good talk to her about them and repeating a very insistent "NO" and she has left them alone.  It does seem rather incredible that she should resist her natural urges to kill small fluttery prey, but they survive and often perch in the small lemon tree under which Foxton spends part of most sunny days.  She has never killed poultry chicks, but often stalked sparrows while they fed amongst the chickens.  Poor cat, with all birds now expressly forbidden.  I feel reasonably sure of her, since she has had many opportunities to eat the birds when I've not been around. 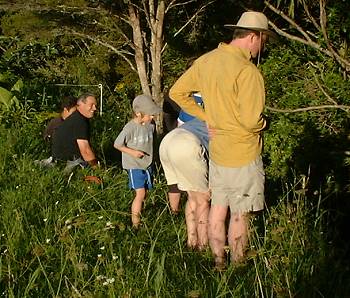 Our new English friends came to visit again this afternoon.  In some parts of the country visitors can go on Whale Watching trips - here we offer Eel Watching!  Matthew and Stephan tied a bit of mutton fat onto the line again and flicked a couple of eels up onto the bank for us all to have a closer look.  While holding the eels for a closer examination of them, Mike and I got our hands rather covered in the slime the eels exude, which later took some time to wash off! 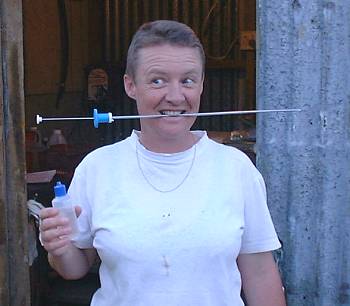 Afterwards I brought heifer #423 in to the yards and everyone watched while I inseminated her.  I think they were a little horrified at the correct method for holding an inseminator!  One just has to remember not to put it back in the same place afterwards!  Each insemination involves the use of a disposable plastic sheath which goes over the semen straw and the metal inseminator, so it's all quite clean at this stage.  When approaching a line of half a dozen cows, an Artificial Breeding Technician at work will hold the inseminators by mouth until they're needed and afterwards place them into a long side pocket. 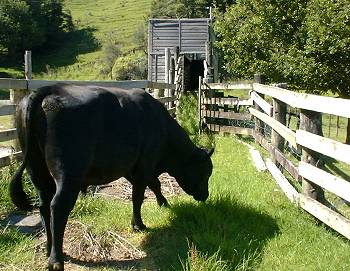 Kees and Lynn had expressed an interest in borrowing Crispin, so after having a final look at him last week, made arrangements with Mangonui Haulage to come and collect him.  This morning was the appointed time and I walked him and his paddock-mate, 356, into the yards, and then went off to gather up the weighing gear.  As I was engaged in that process, I heard the unmistakable rattle of a truck arriving - EARLY!  This is almost unheard of!  The driver was quite happy to wait while I set up the scales and then prompted Crispin to actually stand on them properly: 726kg.

We herded him up the ramp and onto the truck and away he went!  It's nice to send animals off to a new home, rather than on a short journey to the end of their lives. 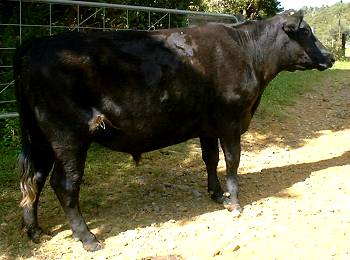 Afterwards I weighed steer 356: 686kg.  He still has a small unhealed hole in his side.  It is gradually reducing, and he seems very well, although he's been suffering a bit of discomfort in his left foot during the last few weeks, as the injury to the side of his hoof has finally grown out, leaving a tender spot underneath as it did so.  I try not to make him walk too far, nor make him go any faster than he chooses.

I thought a lot about this day last year, when he was also very alone.

I took him out to join the insemination mob, so I might have the regular opportunity of applying magical things to the wound, to try and get it to heal! 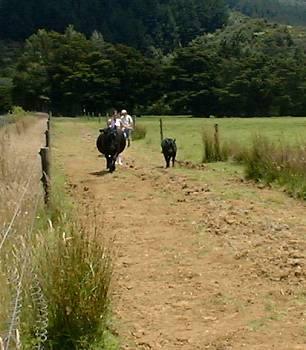 Isla's son of last year, Virago Arran 20 AB, has been keeping one of his cows in a corner of a paddock further out on the farm, despite the fact that the rest of the mob has moved to new grazing.  They've been out there for a couple of days and I've been unable to get them in on my own, so today, thinking the cow might by now have finished being so interesting to the bull, Christine, Matthew and I went out to round them up.  As it turned out, things were still a little tricky and I had to do some fast moving at times to get the bull out of the way so the cow and her calf would actually head in the right direction.  Eventually I just ran the bull ahead, and the two helpers followed along with the other two animals.

Continuing to prepare for the next visit of the fertilizer truck, Stephan has been out renovating more farm tracks.  We walked up the latest effort this afternoon, going out to move the cattle from the middle back paddock, some of which had to be drafted out to go off to do some helpful grazing elsewhere.