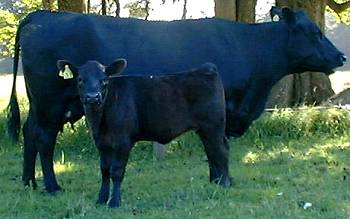 The weather is so warm at the moment, that as the sun comes up the cattle gather in the shade of the trees.  During the day it just gets hotter and hotter, so I have to make sure that there are enough trees in the paddocks for the cattle to gather beneath, without having to crowd together, which would actually make them hotter!  Personally I think the heat and humidity are absolutely wonderful!

Checking my calendar a few days ago, I realised that we had a very narrow timeframe in which to administer the booster vaccination to the calves: we'd done the first of them on 14 December and then, because of being ill and the weather being difficult, hadn't done the rest until two weeks later on 26 December.  Because the first and second shots need to be four to six weeks apart, I'd set us up with a bit of a timing constraint because the two lots of calves are now spread through four mobs of cattle and we don't want to have to get them all in twice and sort out which calves need doing on separate dates again.  So we had to do the whole lot during today and tomorrow.

We carried on getting cattle in to the yards to vaccinate and weigh the calves, and also to do a bit of reorganisation of the bull mobs.  Quadrille 07 was actively interested in Ida 18, one of the twins, the other evening and when I went past their paddock a little later on, the bull was no longer with her, but sitting down, which seemed rather unusual.  I prompted him to get up and discovered that he had somehow hurt his left rear leg or foot.  Bearing in mind what his job entails at this time of the year, that's not a really great thing!  So today, having both bull mobs in the yards, I drafted Quadrille out and gave him a couple of Arran 20's cows which I am fairly sure are already pregnant.  I wanted Quadrille to have company, but not have any need to do anything physically active with them!  He wasn't in any distress and I'm not sure if he's hurt the foot or one of his leg joints, but he limps as he walks and I can't guarantee that he'll be able to continue working.  This may be the end of his time.

Late in the afternoon Peter and May came to visit and stay for the night, before taking the children home with them tomorrow morning.  We all had a couple of sociable hours of chat and refreshments and then I had to go and inseminate three cows!  Feeling such a great sense of relief at the lifting of parental responsibility from my shoulders, I'd gone mad and had three brandies, so the insemination preparation was a slow and careful process, as I double-checked myself to ensure I didn't withdraw the wrong straw from the bank in my relaxed befuddlement.

After our guests had gone, we sat in stunned silence for a little while, then went back out to get on with our work. 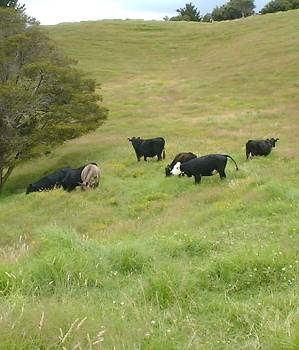 We have new neighbours over the road, on a block of land which used to be a part of the farm and has recently been resold.  William and Lisa had bought some small dairy-cross calves to grow on their land, but there is a mountain of grass over there, so they asked if we could lend them some animals!  Because I'm doing my very best to keep a closed system here in terms of my animals' exposure to varieties of internal parasites we don't already have, I didn't want to put animals over there and then bring them back here onto the farm afterwards.  So I drafted out those which I considered might be "finished" for the works this season and we walked them up the road.  All seven will go straight from here to the works, when they're ready. 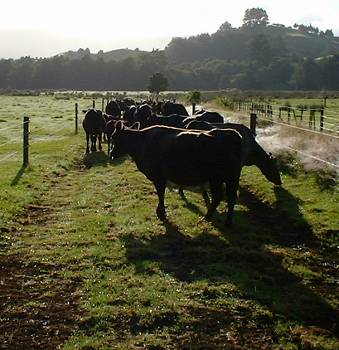 Every three years we're required by the Animal Health Board (who oversee the programme to eradicate Bovine TB) to present all our breeding cattle two years and over for testing.  I received a letter giving me dates back in November, just after the last calf was born, so asked to have my test rescheduled until the calves were a bit older and easier to move.

The cattle go up the race and have a small injection in the caudal fold at the top of the tail.  Three days later, that injection site is felt for any reaction to the injection, which would indicate the possible presence of TB in an animal.  (What happens in that case, I'm not entirely sure, having never had to deal with it.  For further detail, refer to TBfree.) 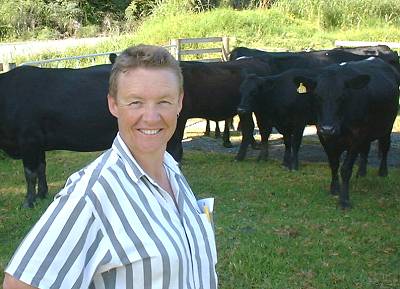 I have received a particular request from Ella's parents who report that Ella frequently asks to see the website and then insists that the pages are searched for pictures of Stephan and me, and could we please make an effort to appear somewhere on every page? 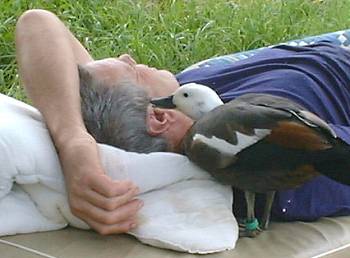 Here we go again.  What is it about Stephan and female Putangitangi?  Ngaio frequently preens Stephan, wanders in and out of the house as she chooses, chases the other ducks away and has made herself more and more at home.  She has lost nearly all of the black feathers on her head, with only a few left around her neck.

My youngest sister and her family came to visit for a few days.  Before they came north, Jude and Roger had found a beautiful bush property for sale on the internet and had arranged to go and have a look this afternoon.

What a beautiful place!  There were mature Kaiwaka and Tanekaha trees, both species I hadn't realised were growing up here - there are none on the farm.  The boundary of the property is a rocky stream, forming a number of small water-falls and large pools amongst thick bush.

The white shape in the hole in the picture below, is the remains of a hatched Kiwi egg, although the nest hole has obviously been abandoned for some time. 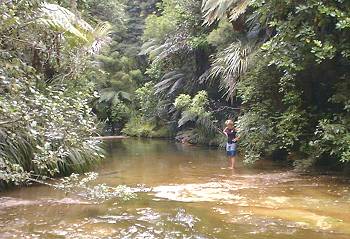 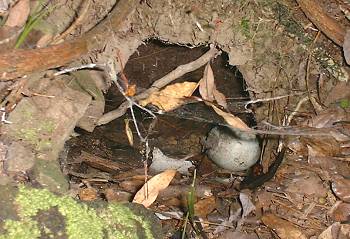 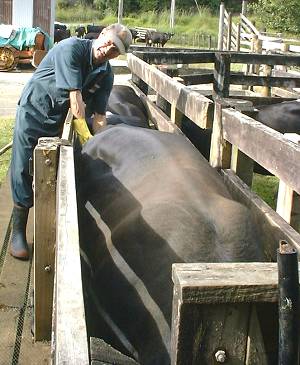 Time to get all the cattle back in again, for Dave to come and feel for reactions to the TB test injection.  Roger gave me a hand to get some of the cows out of their paddocks, then I drafted the calves out of the way and got ready for Dave to arrive, and we had finished the whole lot within about half an hour.  Not bad going: I knew that I'd be working mostly on my own this morning, Stephan being at work, but the whole job took less time than I thought it would.