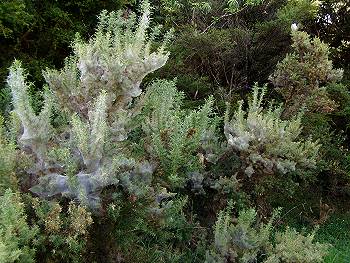 Eight or nine years ago we brought home a branch of gorse infested with gorse spider-mite and put it amongst some living plants out on the left side of the farm, hoping the prevailing south-westerly winds would aid its spread all over the farm.  It did spread, turning up all over the place on the odd bush, but as a method of gorse control, it is disappointingly slow - not that we expected it to kill the gorse off, but we did think the mite might spread itself more concentratedly than it has.  This is the largest single area I've yet seen colonised.  Otherwise we see it only on single bushes, even in large gorse areas.
The mites weave a very wispy web around the plants, far finer than that of any of the spiders which often nest in the gorse. 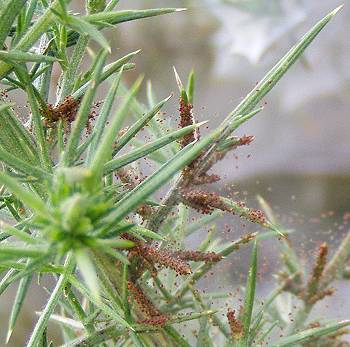 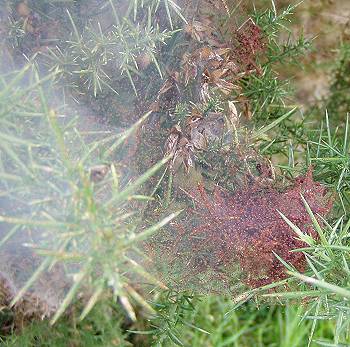 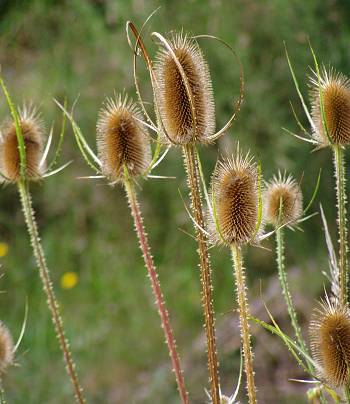 Nearby, a weed I am not pleased to see, beautiful though it may be.  Apparently this is Common Teasel and it's the third one I've seen on the farm, this one rather a long way from the other two, which grew in two years in the same place. 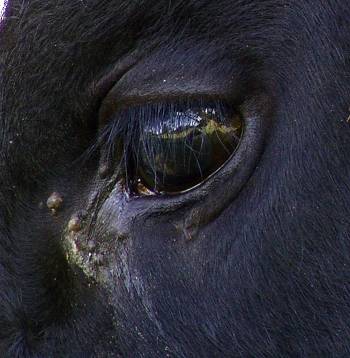 Bull #42 has lost the big wart from his eye.  When I put the bulls back together just after I took the last picture of his wart, he and another fought for some time, and I noticed he'd knocked the wart and it was bleeding.  Now it's gone!  The other warts which were in the area appear to be shrinking away as well.  Good. 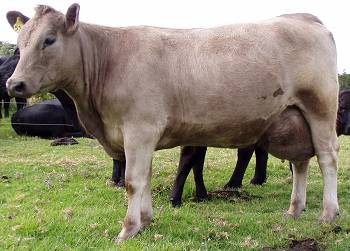 516 and her udder - I regularly take pictures of it, because it's difficult to detect real change when I see her every day and I hope that by comparing pictures I'll notice any significant change in its size.  It looked rather more solid today, but still not particularly troublesome for her.  I'm starting to consider how much room there is in the freezer, hoping to get enough condition onto her to make her worth eating before the udder condition becomes a serious issue.  I don't think there's much else to be done with her, since I doubt she'd be easily accepted at the works and I can't use her for breeding - she's not such a fantastic animal that I would go to great lengths to salvage her for that purpose.

My plan is to have her slaughtered and carefully remove the udder and take it, or samples from it, to the vet for laboratory analysis, so we can find out what the problem has been.  If it's something benign, as I expect, we'll eat her and if it proves to have been something rather more sinister, we won't.  The whole process will be far less costly both in stress and money, than getting her sampled while still alive, which is pretty pointless since she'll end up in the freezer anyway. 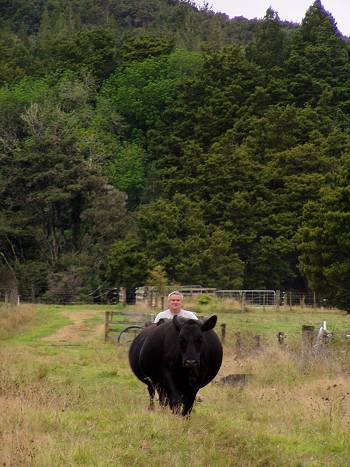 I picked Stephan up from the airport this afternoon and brought him home to do some work.

Yesterday I moved the mob of 86 cows and calves into the Camp paddock and this afternoon discovered that some of the calves had broken down the non-electrified tape I'd put around the site of an old rubbish dump (common and bad old behaviour from times long past) which we've been gradually cleaning up, and there were bits of plastic all over the place.  I have a great fear of the danger of calves eating plastic and blocking things up internally, so I decided to get them out of the paddock straight away.  I set up the gates for them to come across the flats and counted them in to their new paddock through the gate, then Stephan went off to find the last couple and encourage them to join their mates - he's riding the bike, which is why he looks so short.

The two cows are not suffering from any plastic-induced bloat, rather simply the normal processing of the grasses which form the major part of their diet at this time of year.  They never seem particularly uncomfortable, since they spend much of their time in such a state.  There's often a bit of grunting when they're lying down, since the rumen probably takes up a bit of lung room.  I don't usually notice their roundness much, but it really struck me in this picture.

The young ram spent the day following Dotty around today, which is the first serious interest I think I've seen him take in the ewes so far.  Because I've not weaned the lambs and the ewe lambs are still with the ram lamb, we'll have to eat them - they'll be a bit small for lambing in five months and we don't need to increase our flock this year and there's no (financially sensible) way of telling if they're pregnant at this stage. 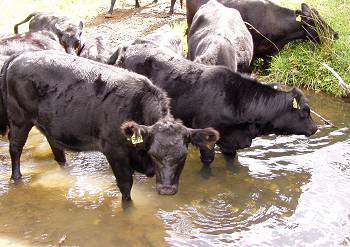 I've started advertising the calves for sale and suddenly realised that if I didn't hurry up and give the last few their sensitiser vaccination (again for those whose process was interrupted last month), they'd not have time for the booster before they have to leave the farm.  If I do them today, they can have the second shot just after Easter, which will be fine.

I brought them in, shedding off those of the large mob which didn't need to go all the way to the yards, and Stephan and I drafted out the few which would be going and gave them what was left of the vaccine I had in the fridge.

The picture is of #539, my favourite calf and #527, along with a few unidentified others and a couple of cows, stopping for a drink as they cross the river on their way out to the Big Back paddock. 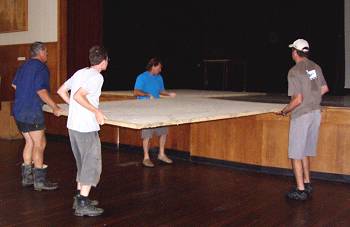 In the late afternoon, three very helpful people came out to our place to help Stephan load the materials to build the extension to the Far North Community Centre stage onto a truck.  Two of them and Stephan and I then went to town and with the help of another very helpful person, unloaded it all into the main hall, ready for Stephan and other helpers to begin putting it all together tomorrow afternoon, ready for the arrival of the Royal New Zealand Ballet on Thursday morning.

Thank you Mike, Paul, Graham and Mark for doing the heavy work and thank you to our good friend Bloo, for the use of the truck!

Today was the day of the Tower Tutus on Tour performance and at 10am the Royal New Zealand Ballet team rolled up to the back doors of the Far North Community Centre and started work. 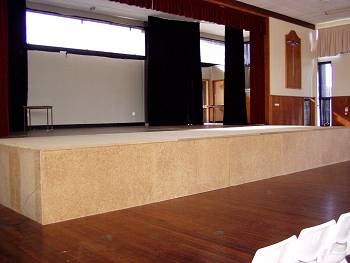 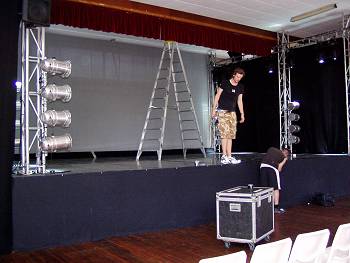 They transformed the two-tone stage floor into a vast expanse of shiny black and after rehearsals during the afternoon, we admitted about 260 people to the hall for the performance at 7.30pm.  I was a bit disappointed in the attendance, but perhaps that's as good as it gets in a community of this size, particularly when the next performance will be only an hour away by car tomorrow night, in a (presumably, since it's new) better venue.  However, the Kaitaia Dramatic Society will have benefited greatly from the fund-raising of presenting the event, and I shall personally ensure they spend the money on actively being dramatic! 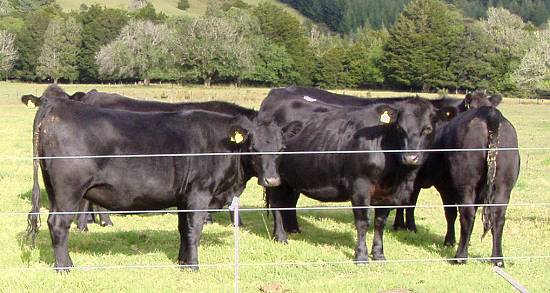 Some of the yearling heifers, hopefully all pregnant, although I know that 494, with the indicator still stuck to her back, isn't.  She should have been, so she'll go off to the works sometime as prime beef - her temperament is a bit disappointing, so I'm not too heartbroken.  She's alright in the paddock, but hell to work with in the yards, bouncing around in the race any time I have her there for any reason.  Bouncy animals give me the jitters, since I have had the odd one go over the top of the rails and it's scary and dangerous, both for them and me.
I'm pretty pleased with their current condition and will do my very best to keep them in that state through the winter, ready for calving.