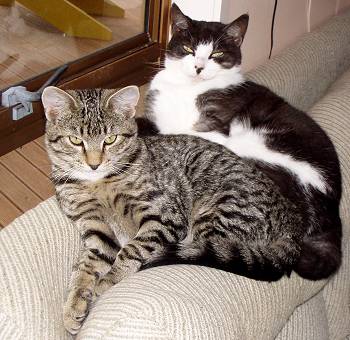 Have I mentioned that the kitten has been named Finan?  When my Aunt Joy was here, she said the kitten was a mischievous youngster, just like Finan, her grandson, and we thought that would be a very good name for him.

Here he is with Foxton Beach, in an unusual moment of calm. 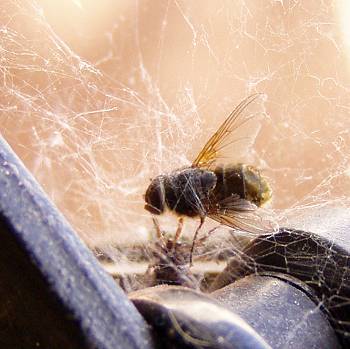 Life and death in the office!  There's a very active spider with a web all around one of the window catches just behind my left shoulder as I sit at the computer in the office - her own web site.  She's been having quite a bit of success lately. 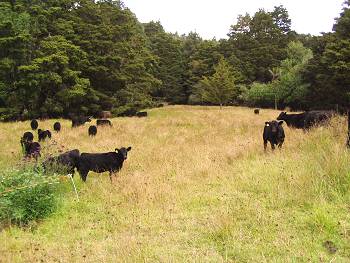 The peninsula on which the chickens live is rarely grazed by any of the animals these days, since it's a bit tricky to get the cattle in past the poultry - the cows aren't accustomed to being flapped at by hens and ducks and gobbled at by turkeys!  The pasture is out of control and needs a good going-over by a lot of animals.  They didn't like it much though, probably mostly because they've not been in here for such a long time and they get nervous in unfamiliar territory.

I've had a couple of phone calls as a result of listing the calves for sale on the internet.  I've managed to sell all the steer calves in one lot, for a price I'm happy with and today, expecting a visitor to look at the heifers, we moved them all back out of the chicken area.
The guy who visited was determined to convince me my heifers were worth less than I wanted for them, but I don't need to sell them in a hurry yet, just wanted to start the process and find buyers if I could, in advance of weaning them. 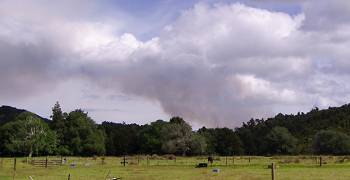 This afternoon there was an alarming amount of thick smoke emanating from somewhere to the south of us, either further up the valley, or somewhere over at Waiotehue.  I phoned the council, rural fire officer and finally the emergency fire service to find out what was going on and nobody knew anything.  There still being a restricted fire season in operation here, anyone doing a controlled burn-off should have had a permit and have been known about by somebody I'd called.  Whatever was going on, the smoke stopped within about half an hour afterwards, although it was drifting quite noticeably across our place for the next hour or so. 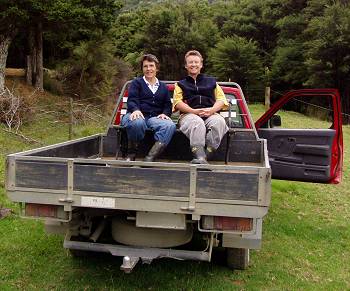 Jill and Bruce came up for an overnight visit and we took them out in and on the ute with us to move the cattle.  Stephan tied a little garden seat/park bench to the back of the ute and Jill and I watched the world go by in relative comfort.

Mike (who's appeared on here from time to time and teaches at the college) emailed me a link to some writing by his Year 9 Language class.  I'm all for encouraging learning in such areas, so if you're of like mind, there's the link.