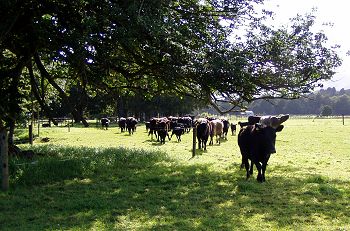 Moving the cows and calves in the Mushroom paddock, early this morning. 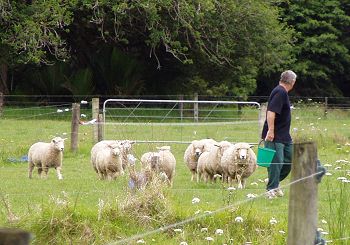 The planets must be oddly aligned or something, for we keep having other people's sheep on our farm!  This time last week I had to chase three rough-looking lambs out of our place and back to their own property and today there was a moth-eaten ewe in a patch of bush which we spent twenty minutes trying to get back to the front of the farm, while she determinedly went through every fence between herself and our little flock.  Once she was with them, we brought the lot to the yards, called her owner and he came and took her away. 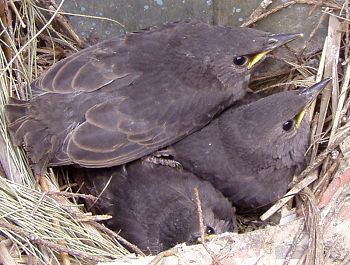 The starling chicks are nearly ready to fledge.  I think their expressions are so funny at this age, for all that it's just how they look.

Today was the first day of the National Secondary school exams.  I've taken on a job which involves organising how they are run at the college and for the local correspondence students and those of one other secondary school in town.  It has meant a great deal of preparatory work over the last couple of weeks and means that for the next two and a half weeks, I'll hardly be here. 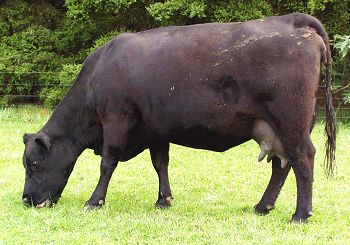 A picture of Isla on Monday evening.

This morning she had the peculiarly pensive look she gets when things are starting to move internally.  I thought she'd have calved during the day, so spent my day (out working) wondering why Stephan hadn't rung with an announcement.

A couple of hours before dark she was sitting down and getting up and wandering around with her tail held out and watched very alertly while her sister, Imagen 33 delivered her heifer calf at 8.20pm.

I spent the evening working in the house, then hourly walking to the end of the house paddock to see how Isla was progressing - mostly not.  At 10pm she began to show definite signs of real labour, lying over on her side and kicking her legs out.

At 11.39pm there was a foot and I thought the people who'd guessed today's date were going to just scrape in, but no, she got up and down, wandered about ...

At 12.05am there were two feet visible and I gave Isla a bit of help to get the calf out (more for my own entertainment and desire to go to bed, than her need) at 12.08am.  The calf is a heifer, Isla's first since Abigail and Amelia in her first two years.

Half an hour later I heard rather too much bellowing from the end of the paddock, so set out to see what was happening: Isla had obviously been giving her calf the rough treatment some cows do to get them up and going, and pushed her through the fence when she started getting to her feet.  Fortunately the bottom wires of the electric fence are off, but I still got quite a tingle whenever I touched the wet calf and the wire at the same time.  I'm surprised the calf wasn't bothered by it.

In the end it took me about half an hour to sort the problem out, in the middle of which I tried to phone Stephan, who was fast asleep at home, but frustratedly discovered I'd left the computer connected to the internet in the middle of updating the announcement page and so just got our answerphone!  Maddening.

I was being very careful, even though Isla is so tame, to give myself room enough to get out of the way if she took exception to my pushing her calf around.  I eventually got her away from the fence and down a slope to a safer area, where Isla couldn't push her back into any sort of danger - the edge of the river-bank is only a couple of feet away from where the calf had first been pushed.

There was enough moonlight to see what I was doing most of the time, but in the shadow of the trees, dealing with black cattle gets a little tricky.  Trying to hold the torch and handle the calf and fend Isla off was all too much at once - and the cattle find the bright light quite disconcerting and confusing - so I'd put it down as soon as I'd seen what was happening on my arrival.

Congratulations to Chris, Nicola, Natalie, and Britt, all of whom guessed the correct date.  We have conducted a draw to determine the winner of the prize.  We thought it best to employ an independent drawer of the name, so wrote them all on equal-sized bits of paper, screwed them up and put them in a plate and gave them to Finan, supervised by Spice.  The one he picked up has CHRIS written on it. 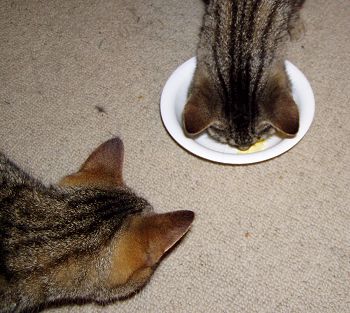 Thank you all for entering, it's always fun to conduct the competition and the odds of winning are obviously far better than those in almost anything else you might enter!

Chris, who lives in London with his family, is delighted to have won the subscription donated by Growing Today.  My thanks to Nadene Hall, its editor, for that kind contribution. 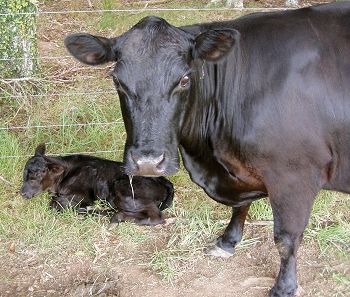 Here's Isla; a photo taken by Stephan during the day. 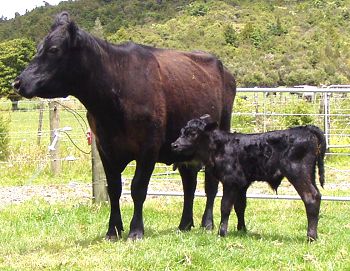 Both Imagen and her calf were a bit unsettled, so in the evening when I was home and we set out to weigh the calves, we had to take them in to the yards to weigh Imagen's daughter.  She was 38kg, smaller than her first calf last year as a two-year-old.

Isla wouldn't go to the yards and since her calf was very placid, we brought the scales to her.  She was Isla's usual smallish 36kg.

I've been leaving home on some mornings at around 7.30am and not coming back again until just before 7pm, so there isn't much farm news.

I opened the mail-box at the gate this evening and two of the starlings flew out!  Three babies raised makes it a very successful season for their parents.