Even on Saturdays there are exams!  With only one student to supervise in the morning, it made for a lucrative knitting session.  I thought of taking 163 of the 164 desks out of the hall and leaving one around which I could prowl, but realised that was, perhaps, a little silly. 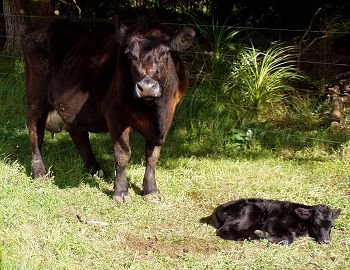 There's an all-day whole-Far North power cut today, from 8am, so I got up early, caught up with email, had breakfast, and didn't look out at the cows in more than a passing way until I'd done all that.  I'd seen Ivy lying down for some time and didn't want to disturb her to see why she wasn't up and grazing as usual, thinking she might have been happily resting.  But walking out when Stephan went off to do a trapping run, I spotted a little black being lying with her - and it wasn't one of the other calves, since both were at the other side of the paddock!  I wasn't expecting Ivy to calve for another week and hadn't been alerted to any earlier action by her udder being particularly full.

The calf is tiny, so I spent some time searching around for a possible twin, and wondered if there was another on the way, but after Ivy produced the afterbirth, I concluded this was it.  Last year's calf was 34kg, 10kg less than her usual single calf birthweight and when we later weighed this one, she was only 22kg.  Cows produce smaller calves as they age, so perhaps this is Ivy's body giving final notice that she can do this no more.  She lost a worrying amount of condition in the last couple of weeks of her pregnancy.  I wonder what this calf will come to and whether she'll always be small?

Out on the flats I have been interested to observe the Putangitangi (Paradise Ducks) staying with their disabled daughter (centre), even though her four siblings have flown away.  I don't think this duckling will ever be able to fly.  The last section of her left wing continues to flap loosely from the damaged joint.  She could live here quite safely; but on her own, when the others all leave, she may not be very happy. 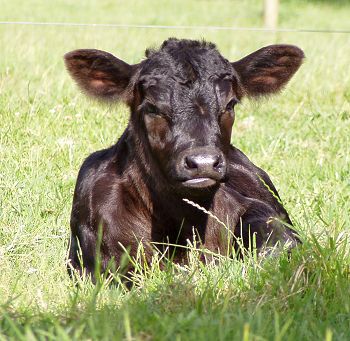 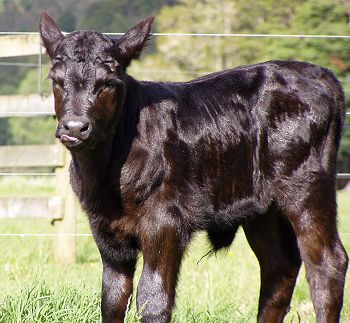 Both calves are very densely hairy and the hair is brilliantly shiny in the sunshine.  They're lovely to watch.

I spotted a calf with bloody scours this afternoon.  She looked, otherwise, in good health, so I'll leave her and get Stephan to keep an eye on them during the week.

Exams, exams and then some more exams, for me.  Stephan moves the cows, builds fences, looks after things, cooks my dinner, which I sit down to eat for a quarter of an hour before getting back to work ...  Thankfully it is such a shortlived job that this level of commitment is sustainable - only Saturday, Monday and Tuesday to go.