The cold bug the man at the meeting last Tuesday contributed to our gathering has beaten my immune system's resources and I feel dreadful!

I have calculated that the ewes are around three or four weeks away from lambing, so today being dry, we got them into the little yards, drafted the four pregnant ewes off from the others and I vaccinated them with 5-in-1.  For the protection of their lambs when they're born, it is important to vaccinate the ewes two to four weeks before lambing, so that the antibodies they develop will also be present in the colostrum which will form the lambs' first protective feed.

We kept the two groups of sheep separate and took the ewes out to the House paddock, which is where they usually lamb, so I can keep a fairly close eye on them without too much inconvenience. 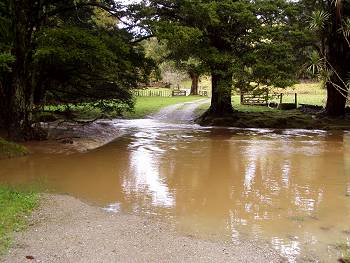 More rain; more river over the bridge.  After it went down, Theresa and Mary-Ruth popped in for a visit and we walked around the cattle, of course.  I only sneezed, oh, two dozen times? 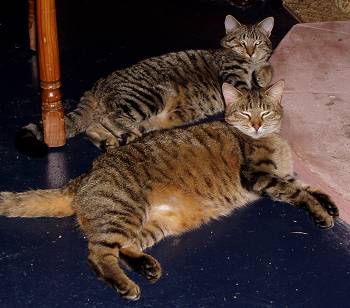 To think both of these fat cats would have been living in the bush if they weren't flaked out in front of the fireplace in the warmth!

Spice, at the front, was the feral-born kitten from out on the farm and Finan was probably dumped by some irresponsible imbecile on the side of the road somewhere nearby, and found his way to us a few weeks later.  He has well recovered from the skin-and-bone state in which he arrived!

Foxton is far too mature to hang out with these two, besides which, Finan keeps bouncing on her which she obviously finds very irritating.

Being ill, I didn't do much at all on Monday.  On Tuesday Jill and Bruce came to visit and have lunch for Jill's birthday.  She and I went out for a gentle stroll, because the heifers needed moving.  Sometimes I think some servants, or children would be a good idea.

Wednesday the 1st of August 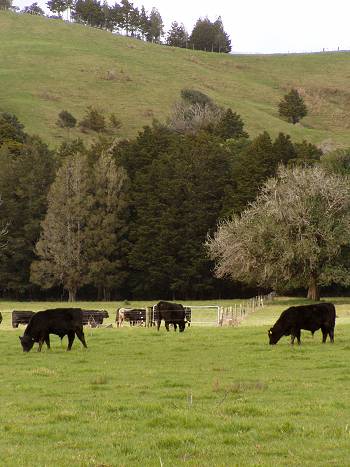 I was feeling a little better today, so when the weather appeared to have cleared, after the morning's rain, I went out for a gentle walk.

I moved Ivy and her two mates, then the bulls, then continued walking out across the flats.  Things aren't looking too bad on an almost-fine afternoon.

In the foreground is the Flat 5d paddock with the yearling bulls, beyond them is one of the heifers with Ivy in Flat 5a and behind her are the 21 rising yearling heifers in Flat 2.  The big trees grow along the river bank, and rising up behind them is the paddock over the road.

As I write this I realise that for some readers the paddock names won't mean much, but for those who have visited the farm in person, or previously studied the various other views and maps I've posted, it may help you make sense of how the whole place fits together.  The other reason for writing in such detail is that I sometimes later depend upon these descriptions when I look back to see what I was doing or where an animal was on a particular date. 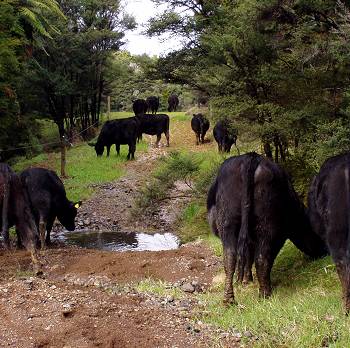 The twenty young/thin cattle were out in the Back Barn paddock and the top end of the Swamp (paddock), so I let them all into the lane and started them on their way down to the front.  They can go back over the road again for a few days.  They're still looking pretty good.

Just after I took the photo, having been thinking to myself how pleasant it was to be out in the warmth and sunshine, a very heavy shower began to fall and I had to run for the nearest tree!  Fortunately Totara of good size are almost as good as an umbrella for keeping one dry. 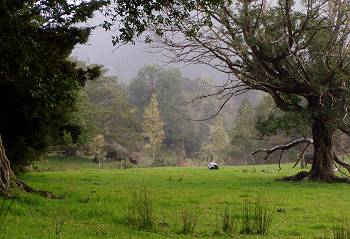 Leaving that mob to make their own way to the front gates, I turned right and headed out to see the fat mob and open up some more paddocks for them.  I had to wait several more minutes under another tree while another heavy shower fell, during which I took this picture, out toward the Big Back paddock, where you may be able to see some of the cows.

The 22 cows are now grazing a total area of around 32 hectares, having access to the Bush Flat and Small Hill paddocks added to the other four.  That's it, there is no more they can graze without cutting into the areas allocated to the others.

Some Pied Stilts flew overhead today, and later I saw them out on the flats.  They occasionally turn up here, but don't seem to stay long.

I think I may have overdone it yesterday with my very pleasant, but long, walk.  This phase of a cold is so frustrating - when you start feeling better enough to want to do things, but not quite well enough to actually do them for long.
I had to get Stephan to do the cattle shifts today as he walked out to do something else.