The week beginning the 4th of August 2007.
Saturday the 4th 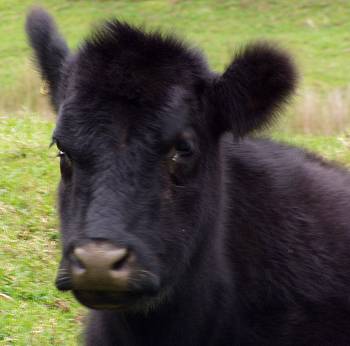 423 - I used to call her Fluffy and obviously that name still applies!  Actually I think Fuzzy would be more apt, but we already have a Fuzzy.  She has had no access to a hair drier.

I always dread August: it's the most difficult month of the year.  By now the grass is getting really scarce, the cattle all stand around looking like they've got nothing to do, because there's nothing much to eat and the ground is so wet that every step I take is likely to send a shot of cold water up my leg or into my gumboot.  Misery.  But it's still better than rush-hour traffic jams.

Stephan and I walked up the hill over the road, intending to move the whole young/thin mob before he goes away tomorrow.  Fifteen of them were down by the gate at the far end of the paddock and the five missing were the R2 heifers - a very useful split, as it then occurred to me I could leave those five on the now-reduced feed on the hill and take the others all away.  We let them out the gate and shepherded them across the road to the little Road Flat paddock.  Ranu 31, the one R3 first-time calver this year, had formerly been with the R2 heifers, but is getting rather too fat on the same feed as her younger companions, so I wanted her to join the others of her age, which has now been accomplished.

I like to keep the two-year-old heifers on the hills as they approach calving.  Some new research is being done on dystocia (calving difficulty) in heifers and early findings are that fitness in heifers has no significant effect either way.  But keeping heifers fit is an old practice which makes sense to me and the sort of fitness they will gain by walking up and down hills will be a little different from that gained by the research project's daily 5km strolls on flat areas, so I'll keep them up there.  It's a good paddock for getting stock in good condition (despite it's variety of hazards) and all animals come off the hill carrying more weight than when they go in there.  There'll be enough gradual growth to keep the five heifers going for a while without them getting too fat, or too thin. 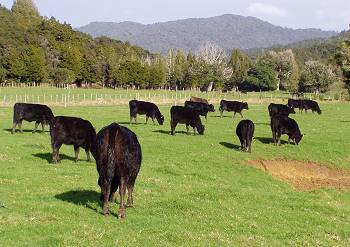 I've slowed these little heifers right down in their paddock shifts now.  This morning I moved them from the Camp paddock into the neighbouring Windmill paddock, which isn't going to keep them very happy for long either.

A sharp storm hit us with lightning, thunder and hail at 11am this morning and I had reason to give thanks again for my decision to buy an Uninterruptible Power Supply through which to run the computer!  It meant that while everything else suddenly went off and on again with the lightning strike, the computer, attached to the phone line, was unaffected - at least as far as I can tell.

Stephan went off on a trip to build a deck for Jude and Roger in Auckland and I settled in for a few days of solitary wanderings and wonderings.

The view from the view I often present: taken from the hill over the road, looking back over the rest of the farm. 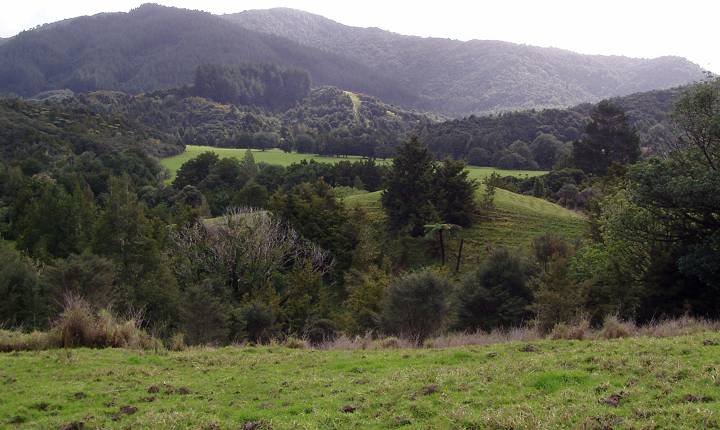 Ivy's due for a copper injection, so I took her and her two mates into the yards and gave it to them.

My vet's advice, after receiving the liver analyses back from the works, is that the copper levels in the cattle are adequate and I don't need to supplement again for another six months.  However, bearing in mind that the reason the levels were that good was that I supplemented in March and previously in November, I am not convinced.  I will need to pull together the results from the last four years, the records of the copper supplementation I've done and have a good look at the whole picture.  I'll get the water tested for its iron (and any other relevant) levels and then will look at how to proceed from here.  I'm pretty sure that if I left the next injection until November, they'd all be getting low again.

If you've dealt with copper deficiency in cattle, I'd be interested to hear from you.  Likewise, I'm happy to share what I have, and am, learning about it as I progress. 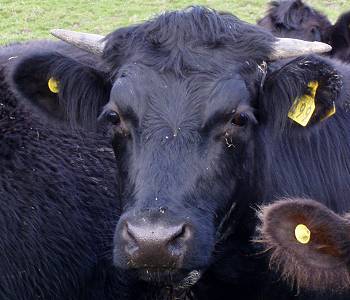 The steer with the enormous scurs.  He's now 22 months old.  The last time I took his picture they were a third of this size and you can see what they looked like when I first discovered them, too. 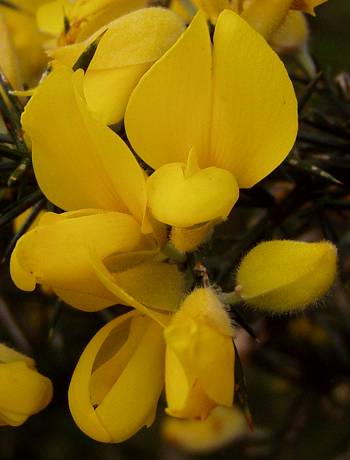 There are a lot of bad things to be said about gorse and its ceaseless march across our landscape, but there are also a couple of good things, if one has a mind to notice them: gorse flowers are cheerfully yellow; and they smell like buttery popcorn.  Walking into a gully full of gorse on a still, warm afternoon, is an olfactory delight.  It helps to remember those things as I duck my head and push through a thicket of gorse and get pricked and scratched all over my head and arms!

I was out for a walk on this lovely afternoon, hunting ragwort and doing a roll-check of the cows around the place as I found them. 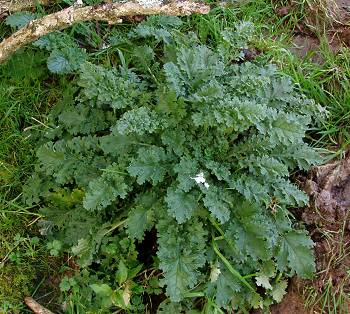 There is the odd flowering ragwort plant and loads of healthy plants in the rosette stage, like this one.  I hunt the plants with the tool I call the "plonker", more formally known as a weedstick, which holds and delivers a measured quantity of herbicidal granules when pushed down on the plants.  Over the following few days the plant curls, goes pale and dies.  It would be best to do this where there will be no cattle for a while, because apparently they will eat the wilted plants more readily than the fresh ones, and they lose none of their danger to the animals as they die.  Ragwort plants cause cumulative damage to animal livers.  However, I don't generally see reports of liver damage on the kill-sheets back from the works and my cattle appear in mostly good health, so if they do eat ragwort, it's presumably only in small quantities, or is not causing too much harm.

When I was in the Middle Back paddock, a flock of 14 Tui flew overhead, from a patch of native trees on our place, to the pines out the back.  I was quite surprised, since I don't think I've ever seen them fly in a large group like that before.  I had to double-check they were Tui and not the (introduced) Mynah birds which are so common here; but their flight is slightly different.

Walking back along the lane, nearly home, I suddenly realised my pocket no longer contained my woollen hat!  The air is cool enough at present for me to have worn it on my way out, until I started climbing the hills through all the gorse.  I'll have to take the same track up through the Big Back paddock again and see if I can find it; but not today.

On the way back I collected the 15 young/thin cattle and took them to the yards for a copper injection.  It didn't go completely smoothly, due to the activities of a dog which lives nearby, which came over to the fence near the yards and barked at us, startling the cattle at just the wrong moment.  The two which had just exited the race dashed off in a panic and the last three to be done looked like they'd like to go over the rails!  The Copper injection packages all say that the cattle must be handled calmly and that no other treatment must be given at the same time as the copper.  The chemical composition is safer now than it used to be, but the way it acts is that upon injection the copper forms a deposit under the skin, and is gradually picked up in the bloodstream and carried off to the liver for storage.  If the cattle are excited, the blood moves faster, too much copper ends up circulating in the blood at once, and can reach a toxic level, leading to death.  I've seen a couple of mild reactions in my cows over the years, but fortunately have not had a bad reaction in any of them, but I am still pretty careful.  The interference of an animal which scared my cattle at that crucial time did not please me.