We brought Damian and the ram in to the yards this afternoon - just around the corner from where they've been grazing together for a few weeks - and checked the ram's feet, drenched him and left them nearby, ready for the ram to start work tomorrow. 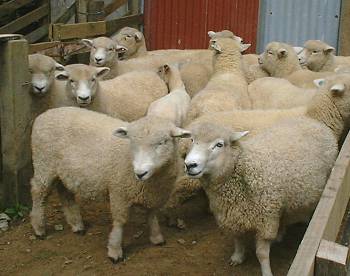 We brought the ewes in from their paddock (and one wicked lamb, which had crashed its way through the fence at some stage) so we could sort and attend to them before putting the ram out.

There was one ewe which ought to have been culled a couple of years ago for having very poor lambs, and a couple of others who have proven below par in the same way.  One of the young two-tooth ewes I was going to bring into the flock had a turned-in eyelid, something we've not seen in an adult sheep before, since the problem usually resolves itself before the animal grows beyond lamb-hood.  She also had pretty awful feet, something we don't want to deliberately breed into our flock.

Once we'd drafted those animals out of the way, Stephan got on with the pedicures... 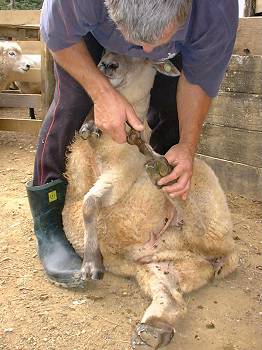 ... watched with great interest by the others in the pen. 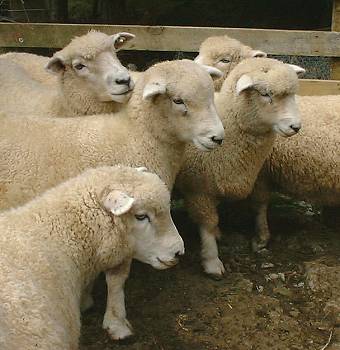 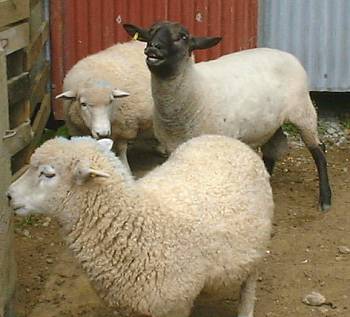 Once there were a few ewes in the other pen, with their feet nicely clipped, I let the ram out to meet them again.

The ram's expression is called the Flehmen Reaction and is demonstrated by many animals in the detection of readiness for mating.  It is most often seen in males after sampling urine from a female, opening access to the vomeronasal organ, which detects certain pheromones and thus the oestrus state of the animal being sampled.

One of the ewes was skittering around in the paddock the other day, but I could see no particular reason, so left her until this mustering for a further check.  It turned out that one of her feet was fly-struck, alive with maggots!  It was a most repellent sight.  Stephan cleared it out while I went to fetch iodine spray and the fly-powder to kill any remaining maggots.  The outer part of her hoof had grown around under her foot, leaving a pocket of dampness which a fly had found; no wonder she was uncomfortable.  We will check her again in a few days to ensure that she's healing well.  We haven't paid much attention to the sheep's feet in recent months, partly because they've appeared quite well - drier than usual conditions have meant less foot problems and so we've not had any urgent need to bring them in and maintenance has slipped!  In most cases that has meant a little overgrowth of hooves, but nothing of any seriousness, except in this one case.

In the afternoon I went to check on the cattle.  This cow, #344, was fast asleep and didn't move, apart from opening one eye when I approached her, talking quietly so she wouldn't be startled by suddenly realising I was near her. 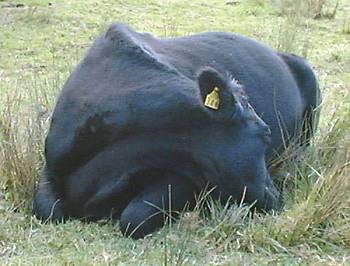 Looking at the balance of the animal, I guess this is the only place to comfortably relax the head when sleeping in this position.  Sometimes they'll stretch right out on their sides, but that's more common in calves, adults presumably needing to remain fairly upright even in repose, so that their rumen activity is not disrupted.  They're marvellous animals, cattle. 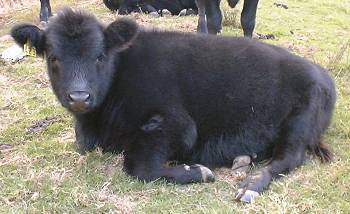 This heifer is so ridiculously hairy!  She's been a bit fluffy since birth, but since her hair has grown and with the start of her winter coat, she looks so funny.

I suspect it's a look she's inherited from her paternal grand-sire, since her aunt, #390 had very similar facial features as a calf.

I learnt something today: never bend down to tie your shoe-laces in an open gateway when there are cattle waiting to go through it to a new paddock!  The cows in the second row kept pushing the front ones, not being able to see what was stopping their progress.  One of the cows leapt through the gap which I was partly obstructing and I yelled my alarm, which frightened the whole mob of 68 waiting animals and they stampeded off away from me.  I looked up and saw one poor calf getting back onto its feet again, after being bowled over in the rush!  They soon came back and quietly trotted through the gate, seemingly unharmed.  I had blocked the gateway rather than just letting them through it, because I wanted to do a head count as they went past me.

Realising that we're getting awfully close to selling the calves, I went out to take some photographs of as many as I could encourage to stand still in the positions I wanted.  I usually make notes about their general appearance, muscularity in particular, but one of the great things about digital photography is the ability to keep visual records as well.  I will do a more intense assessment of all the calves before they go this year, based on all I have recently learned about structural soundness.  A lot of the calves are fantastic, some less so, and since most of their mothers remain in the breeding herd from year to year, the appearance of every year's calf counts!

Here is one cow which Stephan (as the fencer) will not be sorry to see go! 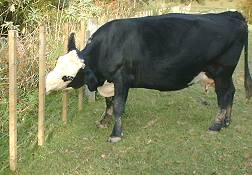 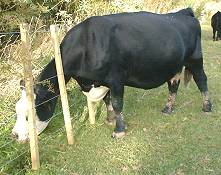 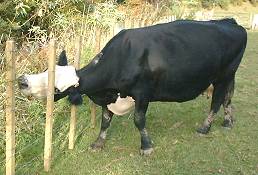 First you work out which gap you can push your head through, then you lean into the fence so you can get your tongue around the furthest long grass, then you wiggle your way back through and move along to the next gap.  There are about three or four cows in the herd who do this and whilst it's quite understandable - the grass is greener out there - it's not good for the long-term integrity of the fences!  It is likely we'll put a hot-wire out-rigger (one electric wire on short stakes) along the inside of this fence, to discourage such activities.  #56 won't have much more opportunity to do this though, since she's on the cull list and due to leave the farm as soon as her calf is weaned.

I went to find the rest of the young stock which had failed to come down to the gate to be moved out of the PWHS (Paddock With the two Holes which three Steers have fallen in!) yesterday.  All were there except for two of the biggest steers.  I walked all the way around the bottom of the paddock, along the swamp, over where #356 got stuck, up the hill and to the very highest point, where I found the steers standing, waiting by the gate at the top of the paddock in which the others were now grazing.  Silly, inconvenient animals.

There was a top-dressing airplane flying from a nearby air-strip and away over the valleys to the north.  The sound of the plane's engine echoed back off the hills behind our place, sounding like two planes flying in completely different parts of the sky.

In some lights the native bush looks so amazing.  One day I hope to have a better quality camera to be able to capture some of the effect.  In the mean time, you'll just have to believe that it's lovely and settle for these attempts at conveying the view.

I'd also very much like to get some pictures of Kauri trees from afar, for comparison with this sort of bush in which there are no huge Kauri.

Getting ready for play rehearsal tonight, Stephan spent some time preparing some of the props, including the sink bench for the kitchen.  He has already constructed and installed the wood-stove. 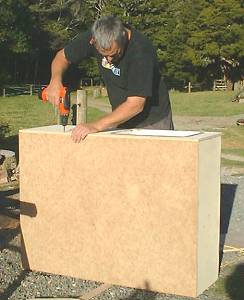 The butchered meat came home today, in several boxes and I promptly stacked it all in the newly cleaned freezer, layering it all between newspaper, to hopefully keep it from sticking together and the contents of the bags from freezing into interlocking blocks which can't be individually retrieved. 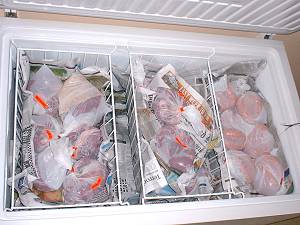 I moved #356 and Ivy into the paddock near the house, since they really had run out of grass out by the yards and I can go back to treating the steer in the paddock again for a while.  I weighed him this morning and he has regained a little weight since the last time.  His temperature is remaining quite constant and his foot infection appears to have cleared up, although I will still need to keep an eye on it - it has not properly resolved, but is not making him ill at the moment.  The hole in his side has contracted a bit, but it's still going to be some time before I can leave him alone.

For dinner we had ... scrambled egg.  We were both so tired by the time we finished whatever else we had to do, that we couldn't be bothered cooking anything special.

I went out to see what the cattle were up to and found them just lying around!  Can't trust this lot to be working hard when I'm not looking. 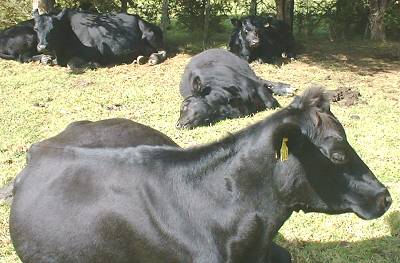 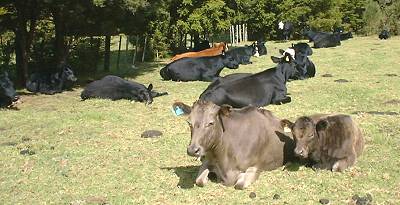 The "dead" calf is an example of how calves can lie down, but cows seldom do unless ill or in labour.  She was fast asleep, looked good enough to cuddle - except she'd be up and away before I got there if I tried!

Cows spend a lot of time sitting around like this, since much of their food-processing involves rechewing the grass they've previously swallowed down into their rumens - chewing their cud.  It's a peaceful sort of life when there's enough to eat and the weather is nice.

I cooked (an extraordinary occurrence!) some ox-tail stew - after dismantling and repairing the slow-cooking "crock pot" and then prepared Fillet Béarnaise for Grant, Stephan and me for our dinner.  It was all going surprisingly well until the last moment when my sauce curdled.  I shall have to consult a proper chef for further guidance, since there's a lot of fillet steak to eat and Béarnaise sauce is a favourite.