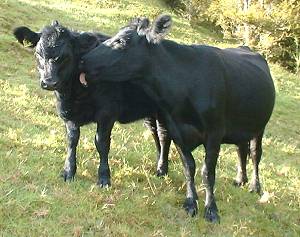 Cattle are lovely to watch when they can be left to live as they naturally might - we'll ignore for the moment that before too many more weeks pass, I'll tear these two apart and deny them access to each other until they are well weaned.

Because I've been let down by the agent with whom I arranged for the bull and steer to go to the Dargaville works by Thursday, I've had to do some reorganisation of other stock to ensure I can keep the bull where I want him - and continue to feed the two of them well until they go.  That meant moving the bull calves and their mothers in with the lambs in the mean time, so they're not all on either side of one fence ... 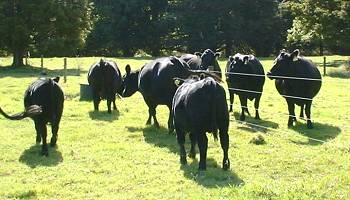 ... which meant Isla, Quean, Isis and the boys, met up with Ranu, Irene, Sybil and Queenly, none of whom they've seen for some time!

In the early evening, I received a telephone call from my youngest sister, Jude, to say that she was beginning labour and could I please come to see the baby born?  Stephan was already in Auckland, having gone to a wood-turning seminar, so Jane from next door took me as far as Mangamuka Bridge, where I met Bruce and together we travelled to Auckland, arriving just before midnight.

My new nephew, Jasper, was born just before 5am in Jude and Roger's bedroom, with rather a lot of us in attendance! 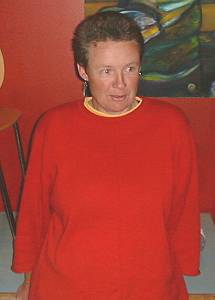 You wouldn't think that someone who deals with all sorts of bodily disasters in animals would be left shaking and faint at the sight of a bit of human blood!  I shall plead exhaustion of both body and emotion as excuses for this extraordinary reaction. 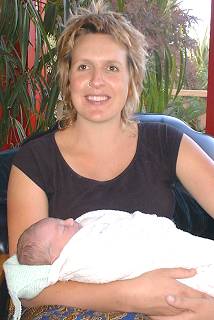 If you know my family and would like to see more of the pictures, email me and I'll send you the address of their pictures website.

Stephan and I spent the morning there, then left to try and get home with enough light to do what we needed to before dark!  We made it just in time to feed the chickens and ducks and for me to treat the steer.

The two boys are off to the other works, at Moerewa.  We've managed not to have the bull jump anywhere and I got him into the yards this morning with little bother, so his short expression of bad behaviour may just have been a matter of opportunity. 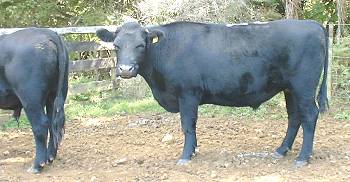 I'm really pleased we got 358 to this stage, since it looked so very much like we'd be burying him a few months ago!

We went out to get #355 steer, because I had telephoned the butcher the other day to arrange for him to do a beast for us to eat and I think the slaughter man will come tomorrow!  This steer has been "freezer boy" for his entire life and he needs to be done before he gets any older - he's now 3½ years old and in lovely condition, and feed will only get shorter from now on.  We brought him and a couple of the heifers in for company and put them in the house paddock. 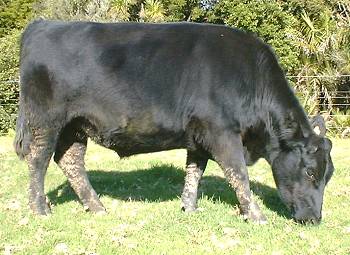 Stephan went out spraying ragwort and I spent the morning in uncomfortable anticipation of the arrival of the man who would shoot my steer, even though I'm aware that for a meat-producing animal, this is the best way to go - out grazing quietly right up to the unanticipated end of your life.  We haven't had a beast killed on the property for our freezer for about three years, partly because 355 had never quite been ready and partly because the freezer always seemed to be full of other things!  People who live in the country and are able to eat their own-produced meat, get the best beef in the world!  Whilst the abattoir system in this country is operated in a humane and careful manner, the animals are more stressed by the process than they are by staying at home, so commercially available meat is always different from that which we eat here.

Lloyd the slaughter-man arrived and I very particularly pointed out that it was the steer in the paddock he should shoot, not either of the heifers - one is Inga, stud heifer and the other 390, another favourite!  I promptly went inside while he shot the steer, since I really didn't want to watch.

355's mother was one of the first calves of our first bull and I inseminated her with the semen of a very old stud bull, from which 355 resulted.  He's always been quite small, partly because his mother was half Jersey and because his father would have been a bull of quite small stature.  I figured he'd be good for us to eat since Jersey meat is apparently very good and ¾ Angus blood will make it even better!

If you are interested in the process Lloyd went through, between shooting the steer and taking the meat away, you may find it all via this link.  (You will need to email for a password for this page.)  Please don't look if you don't want to see it!

Thursday the 1st of April

Stephan went out and collected this wonderful lot of wood from one of the hillsides he cut last year.

Then he cut it all up and brought it back to the house! 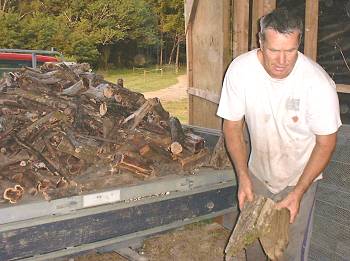 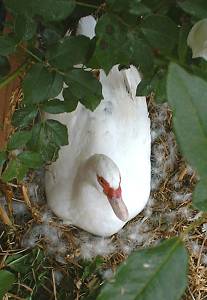 The Muscovy duck created this nest just outside the house, under the rose bush.  She had 13 fertile eggs of her own, which I recently removed and replaced with some from our laying ducks.  I haven't yet checked to see if they're fertile, but must do so soon.