The week beginning the 9th of June 2007.
Saturday the 9th

I spent a couple of hours with a water blaster in the yards this morning, ending up completely covered in mud splatters - must have looked a sight when some friends called in to say hello on their way past!  The yard railings look rather nice though, bright wood coloured instead of dark with the algae which grow on the wood surface over time.  The cat-walk is better for a clean as well: even with wire netting nailed to the wood, it had become quite slippery. 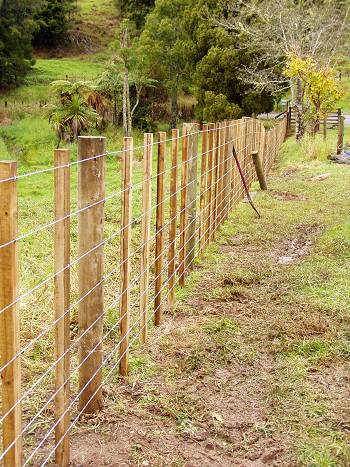 The fence is virtually finished now, needing only the installation of a stile so the boys from next door can come over easily if they want to.  No ruminant will get through that in a hurry!

Along the fence where it forms part of the yards, we used strainer posts and left them standing higher than the normal fence, so they can have a top rail attached and form a good outside fence for an extra yard pen.  I've wanted to have some more rails put in for another pen for some time, since the whole roundabout area has been one large yard for ages and while it's very useful, it would be even better to have a smaller enclosure or two near the race and the rest of the yards. 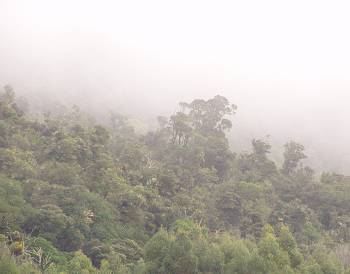 I'm always fascinated by mist and low cloud over the bush-clad hills: suddenly a particular tree, or a ridge will appear, where I've never noticed it before, being usually green on green.  That big tree is probably a Northern Rata. 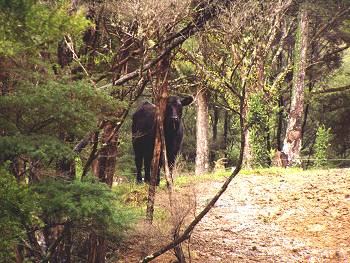 Last week I booked an appointment for a vet to come out and inject the heifers with Prostaglandin, to cause them to expel any pregnancies which might have resulted from the visit by the little bull the other week.  I started getting ready early because a truck was also coming, at exactly the same time (although I was counting on it being late as usual) to pick up the two sold bulls.  But things didn't quite go as smoothly as I'd hoped, the heifers not all being where they ought to have been - there was a stretched wire on the fence between their paddock and the Back Barn paddock and I wondered if that was significant, but it wasn't until I went back out to that paddock again to check, that I finally heard a lone moo, from this little lost heifer.

Because the lost heifer was one of those I've sold, and she was part of the mob the bull had access to, she had to have her jab!  So finally I had the heifers in at the yards, where I left them to wait while I got the bulls in and thought I'd better do some measurements on the whole lot of them before Alex 51 left, so weighed and did scrotal measurements.  I got all flustered when the vet arrived and let the bulls out, rather than keeping the two who were about to leave in the loading pen, so when the truck arrived, things got a bit busy!  Noel, the truck-driver, whom I happen to have known since we went to Taipa school together, gave us a hand to push the heifers up the race for their injections (all done in pouring rain) and as soon as that was done, I brought the two bulls back so they could go onto the truck and away. 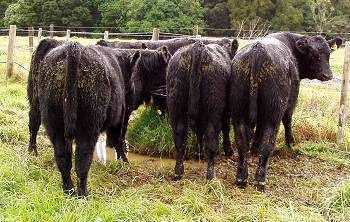 The remaining five little bulls then went back into their paddock.

I had to go back out for a walk around the back of the farm to figure out why there were cows appearing in the PW hill paddock - it turned out I'd forgotten I'd left the gates open up the top into the Big Back paddock.  Why they'd not wandered over before now, I don't know - or maybe they had and I'd just not seen them.  I found them all, moved the rest of them into the paddock they'd started appearing in and wrote enough notes in my notebook to know what I'd done! 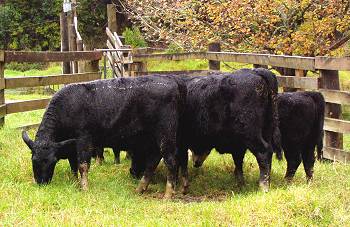 The six little heifers I've sold went off on Aubin Braithwaite's truck this morning, to their new home a few kilometres down the road. 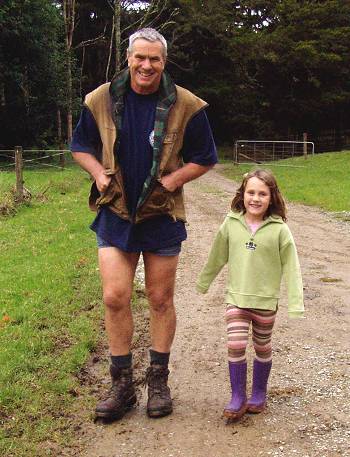 Our donor-daughter, Ella, arrived today to stay for a few days.  Ella is five now and has taken a few days off school while her mums get away for a much needed break and Ella visits some of the rest of her extended family.  This is the first time she's been to stay with us on her own.  It amuses me now, rather than disturbs as it did a bit when it first happened, to have a small child running around calling "Dad".  When Stella comes to stay I feel like she's my responsibility, but Ella firmly opts for Stephan's attention! 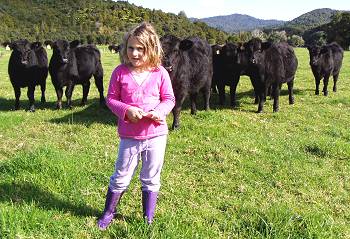 Ella and the heifers, which we went out to check on early this afternoon. 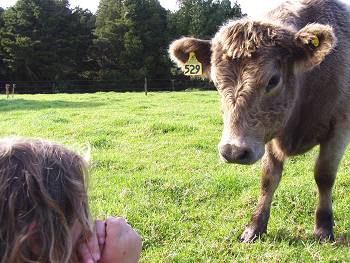 Grey 529 was very curious about Ella, who stayed very still to be investigated. 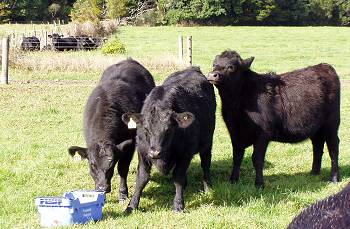 In the background are the little bulls, in Flat 1, who'd obviously like to come and have a closer time with these heifers!

Yesterday I moved the sheep from out at the front near the road because one of our neighbours appears to have a very lax attitude toward dog control and I do not want to have to deal with harassed sheep - I'm going away for a few days, so I wanted them where they were a bit safer from dog worrying.

I decided we could mix all the sheep together again, so the four hoggets would stop free-ranging all over the farm!  The four hoggets are the ones moving away from us and the facing sheep are Damian and the adult ewes with Bendy and the little ram in the foreground.  If I wanted to keep the ewe hoggets, I'd keep them away from the ram for a bit longer, but we really don't need this many sheep, so the hoggets will be in the freezer before they'd have time to have lambs.

Friday the 15th of June 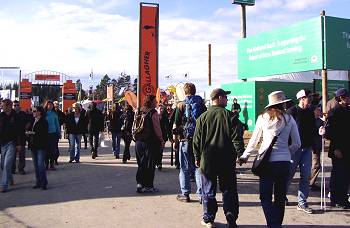 I caught a plane with Ella this morning and travelled to Auckland (as one always must on planes out of Kaitaia), deposited Ella into the safe custody of another known adult and continued my journey to Hamilton Airport, where I was met by the lovely Kate, who owns www.lifestyleblock.co.nz.  I'd asked Kate if she'd be able to pick me up and drop me off at the Fieldays for the afternoon, if it suited her to do so.  What I didn't realise was that that meant she drove across the carpark and I got out of the car again and straight onto a bus down the hill!

As has always been the case when I go to the Fieldays, it was fine and clear and actually not terribly cold.  I wandered around, meeting up with Lesley and Len, who visited us here a few years ago, after I met them through Kate's web site.  They introduced me to one or two other people, one of whom I'd already had some email contact with, so it was nice to make face-to-face contact.  Sue and Trevor of Murray Grey breeding fame were in the Murray Grey stand making and selling Murray Grey steak sandwiches, a very popular meal for many Fieldays visitors.

I visited a few stands of companies and products I had wanted to find out more about, then met up with Lesley and Len again because they were providing my ride home to Kate and Geoff's place, where they too were staying.  We had a bit of fun getting on the free buses back up the hill, in a great rush of people all leaving the gates at the same time!  Traffic jams are par for the course at the Fieldays.

Kate had been busily cooking up a storm at home, preparing for a gathering of any LSBers (those who have become part of the online community contributing to the discussion forum on the lifestyleblock.co.nz website) who happened to be in the area for the Fieldays.  I met two couples of which one member of each is a LSB member, both of whom I had previously known only by their screen nicknames.