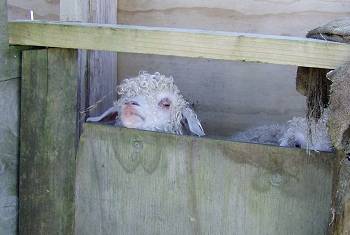 Kate and Geoff, my kind hosts for the weekend, live on a mountain with extraordinary views over the surrounding countryside; it's also hellishly cold in the winter!  Today, while I watched and made notes for them, they mustered their small flock of Angora goats, trimmed their feet and put them into a foot-bath to cure their feet of footrot.

The bottom of my face was so cold my teeth began to feel quite strange!  However, the company was always warm and cheery, so I survived.

I don't want to make too much of a fuss, you understand, but after another COLD day, Kate and Geoff drove me to the Hamilton Airport Motor Inn to check in for the main purpose of my trip south: the Association of Rural Veterinary Practices Annual Conference.  I had a very pleasant room, with a bath, which I used as often as was practically possible!  I always like to have a bath when staying away, since ours is still in the garden, and its a little chilly for bathing at this time of the year!

The Association of Rural Veterinary Practices Annual Conference, for the member Directors of Incorporated Society Club Veterinary practices (make sense of all that if you can) and some of those practices' vets, ranged from extremely interesting to irrelevantly tedious: the two days were divided into half-hour blocks for a variety of speakers.  The most interesting to me were the veterinarians, one of whom spoke of a particular case he'd dealt with of a dairy farmer who developed a skin infection which was eventually proven to be caused by exactly the same bacteria which was causing mastitis (an udder infection) in his cows and to have been originally introduced by the farmer to the cows; another had worked as a first-on-the-scene vet in cases of suspected exotic disease, so spoke of the process they'd gone through during the Waiheke Island Foot & Mouth Disease hoax a couple of years ago.  Then there were a few local business people speaking about ventures they'd begun and had success in, including one farmer who'd branched into multiple ownership, including dairying in North America; the most tedious speaker for me was an enthusiastic young bloke who runs a local sports centre and his topic was the importance of sports clubs to rural communities.  I just couldn't make the mental leap from veterinary practice to sports, in any way.  Rugby leaves me cold.  Don't believe everything you read about some "national religion"!  In fact many of the speakers to the conference made the obvious assumption that their audience were rugby-playing dairy farmers.  Many of them may have been, but I'm not sure it would have been a majority.

There was a very enjoyable dinner on the Monday evening at The Narrows Landing just down the road, at which Tracy Lemon, another sports person, spoke about her life and career.  It was an extremely cold night in a big venue, so we weren't, unfortunately, always comfortably warm and the dinner was somewhat challenged in the same regard - very tasty though!

The last event of the conference was a visit to the Waikato Innovation Park, and then across town to a guided tour through the animal pharmaceutical manufacturer StockGuard's premises.  I enjoyed the latter in particular, not having given much detailed thought to how some of the medicines we sometimes use get developed and packaged.

Overall the conference was well organised and both the venue and accommodation were very comfortable.  The content of the conference itself wasn't quite what I expected.  Much of it was very interesting, but as a new director, I could have done with the opportunity to get up to speed on some of the important functions of a board of directors for such an organisation and had thought that a national conference would have had at least a little of that content in its programme.

After another pleasant night's stay with Kate and Geoff, Kate delivered me back to Hamilton Airport this morning and I flew to Auckland, to be met by Jude, with Jasper and Louie in tow.  I like to go and stay with Jude and Roger and the children, since otherwise I don't see a lot of them and the small relatives change so quickly at one, three and five years old.  Stella vacated her bed for me to sleep in, while she slept on a mattress on the floor in her sleeping bag. 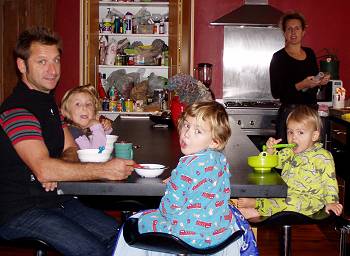 The family at breakfast.

I went shopping at the St Luke's shopping mall.  I used to live in Fowlds Avenue which is a road opposite the complex, so it was my main source of groceries (and almost anything else one might wish to find).  When I lived a little further away, in New North Road, I cycled there for my shopping, since it was years before I bought a car.  The mall is somewhat bigger and flasher than it was in earlier years!

The other place I visited, as I always do when in Auckland, was The Women's Bookshop!  Carol Beu's wonderful shop was a lifeline for me during the many years it was in Dominion Road and is now, conveniently for me, opposite the top of Jude's Richmond Road in Ponsonby. 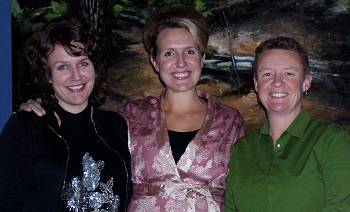 This evening we all, Jill, Jude, Rachel and I, with Roger and Bruce, went to the Red Elephant Thai Restaurant in Khyber Pass, in honour of Rachel's 40th Birthday!  We had a really nice meal and a very pleasant evening.

Having had rather a strange 40th birthday myself and having been so distracted at the time that I didn't experience it as any sort of traumatic "landmark", it has been quite strange to think of my little sister being that old! 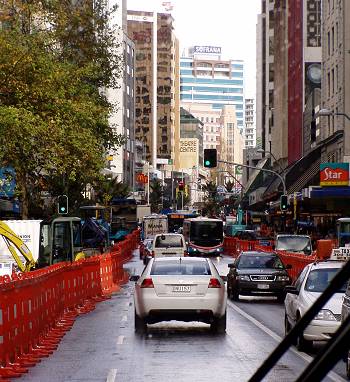 After a brunch gathering at a cafe, with Jill, Jude, Issa and Rachel, since Issa couldn't be with us last night, Rachel dropped me off in Parnell so I could go and visit Mary-Ruth at her Vet practice there.  The clinic is in an old house, so is quite compact in some places, but obviously very efficiently run!

Then, after waiting for a very heavy shower to pass, I ran over the road, jumped onto a conveniently passing bus which took me all the way back to the top of Jude's road again, via Queen Street (Auckland Central's main street, pictured looking south).  It's all rather messy at present with some sort of works going on on both sides of the road.

At 3.30pm I said good bye to all the family and got into a Shuttle van to go out to the airport and catch my flight back home.  There were some rather lumpy clouds about and it wasn't a particularly comfortable flight!  But there on the ground was a little red ute and a big tall Stephan waiting to take me home again to cats, cows, comfort and familiarity.