The week beginning the 3rd of February 2007.
Saturday the 3rd 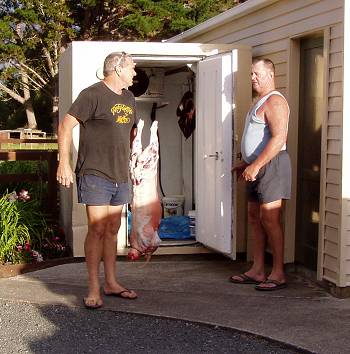 The day of Jude and Roger's wedding!

We got up really early and Stephan, having loaded up all the firewood onto the back of the ute last evening, finished the packing - I wasn't a great deal of help, being able only to carry one thing at a time in my teeth or on the handles of my crutches!  We had to take the spit machinery (the old washing-machine ringer motor, the long pole and the supports which hold everything in place), the firewood, old corrugated iron to act as wind-shields around the cooking area, as well as the sheep.  We also needed a tent, all our sleeping gear, mattresses for two other people, a large number of bottles of clean drinking water, since there isn't much where we're going and we anticipated that some guests might have neglected to bring any.  We got going not too much later than we'd planned and headed for Jim's place to collect the two cold sheep. 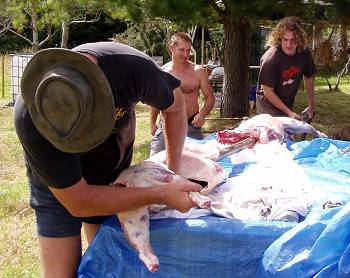 When we arrived at Mokau (on the east coast, south of Russell and Oakura), two and a half hours later, Stephan instantly set to work on the sheep, readying them for cooking, with occasional help from passers-by.  I hobbled over and lit the fire, since it needed to have time to make coals.

There was a slight glitch when Stephan realised that the lamb bodies, being smaller than the usual hoggets we spit-roast, were a little too small for the pole, so some adjustments had to be made with a sharp knife!  Issa very ably assisted by holding and pushing the other end of the pole.

That's Roger, the groom, in the middle, obviously still in his working clothes.

Eventually all was ready, the generator was started so the sheep began to turn and Stephan began shovelling hot coals from the fire and placing them around the sheep.  We had to be a bit careful with both the main fire and the area where the coals were placed, since the Kikuyu grass burns very well and tends to take the fire away along its stolons, so suddenly there will be flames or smouldering grass a foot or two away from where one expects!  However it's easy enough to beat out with a shovel and I had also ensured we had wet sacks nearby and Roger and one of his mates had filled up a 1000 litre tank so we'd have bulk water on tap if we suddenly needed it! 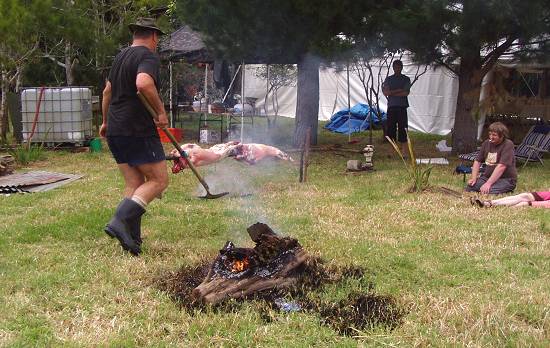 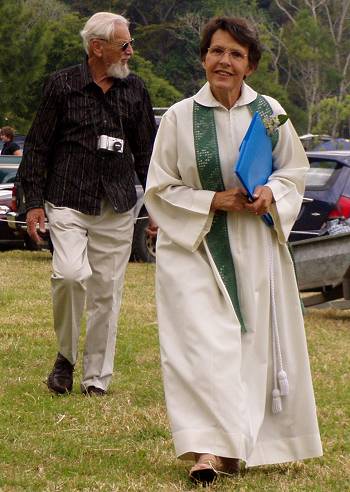 Because there's a priest or two in the family, Jude got a cheap deal on the ceremony.

Jill (with Bruce following) had to attain special permission from the Anglican Church to conduct the marriage ceremony outside a church. 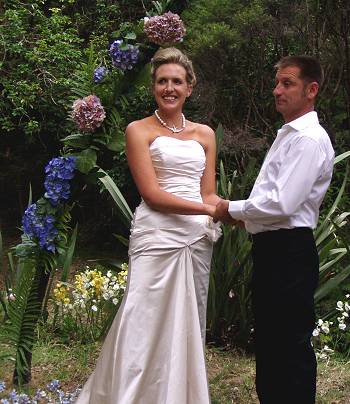 Jude arrived in a gold Bentley, driven by one of their many friends and walked into the gathering with Issa (our nephew), to the sound of a song she had recorded without Roger's knowledge, specifically to play for him today.  And so the ceremony began.

Jude is a very talented musician, who unfortunately doesn't create a lot of music at this time, so it was a real treat to hear something from her again.  The last I heard was recorded around the time of her studying in Nelson, many years ago, and a live night somewhere in Auckland when she was playing with another woman who, with rather less talent (not just familial bias, I assure you) has gone off and become rather well-known. 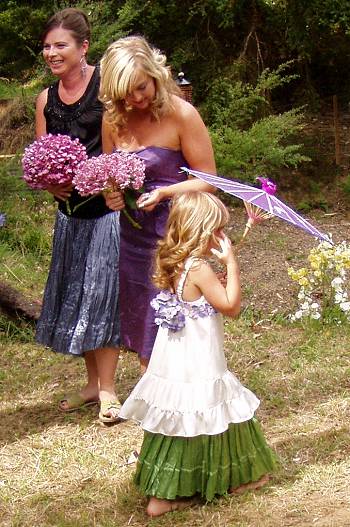 Two of Jude's bride's-maids had become pregnant at about the same time I bred the sheep to create the lambs, so they were quite round.  This timing interested me, since my babies were born months ago and are already well-grown enough to eat!

Next to Stella, with her beautiful dress and parasol is Aleisha, Roger's niece, not one of the pregnant bride's-maids! 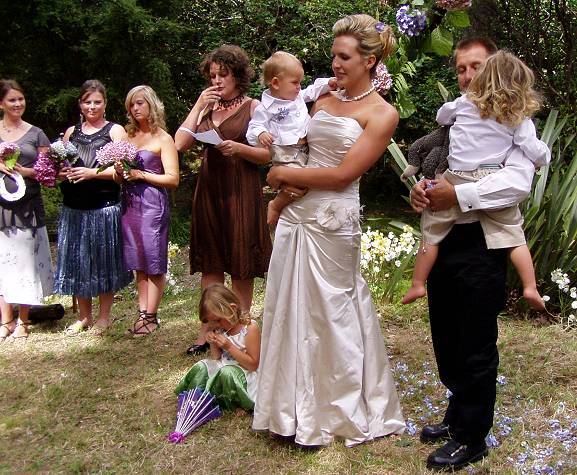 When you get married and you already have three children, they need to be included in the ceremony!  Jude and Roger had had silver rings on chains made for the children, with all five names engraved around them.

In the photo, our sister, Rachel, is reading something she wrote especially for the occasion. 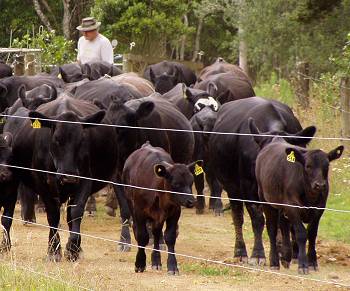 We got up this morning at 5.30am, packed up the tent and all the spit gear and left Mokau by just after 7am.  When we'd had breakfast, we went out and collected the big mob of cows, calves and bull #26 and brought them to the yards for easy drafting - easy being a relative term, since there's nothing particularly easy about drafting cattle while on crutches!  I left the bull with nine cows and they went into the Pig paddock next to the yards and the others all went out onto the flats, since I wanted them nearby for wandering amongst when we have visitors tomorrow.

After a bit of lunch, we went to sleep for five hours in an attempt to catch up after none last night, so we could continue with our usual lives! 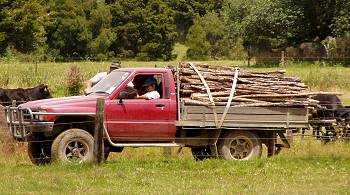 Just after we arrived home this morning, we discovered Graham, who has spent many days over the last few months cutting firewood on our hillsides, on one of several trips in and out with his ute today, carting the wood out to wherever he stores it before selling it to people for winter fuel.

This afternoon Theresa and Mary-Ruth arrived for an overnight visit from just south of Auckland.  Theresa first contacted me via this site eighteen months ago and I've been in occasional email contact with both of them since then.  The three of us spent a very pleasant afternoon out looking at and talking about the cattle.  They are new breeders of polled Hereford cattle and Mary-Ruth is a vet, so we were able to exchange all sorts of interesting and useful information.

While looking at the mob of cattle out near the yards this afternoon, we saw the neighbour's sheep heading off up the road, leaving behind one of the lambs with very obvious flystrike.  One cannot leave an animal in such a state, so in the newly-falling rain, Stephan, Mary-Ruth and Theresa went off with the flystrike powder to run down the lamb and treat it.

The sheep are grazing an (obviously not sheep-proof) area of quite long grass, which at this time of year carries significant risk of fly-strike, since the sheep's wool often doesn't fully dry out, which is great for fly eggs and then maggots.  The neighbours are absent from home for significant periods and are thus not keeping an adequate eye on their stock, which is neglectful and illegal.  Having seen the state of the lamb, we couldn't just leave it.  We left a note for the neighbour on the doorstep, to which he did not reply. 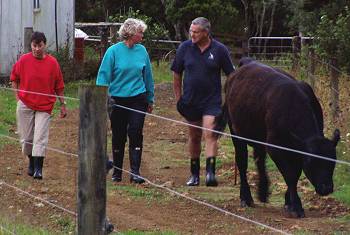 Later, when it had stopped raining, we went out for a look at another of the cattle mobs and when I saw that one of the cows was possibly on heat, I asked my three companions to draft her and her calf out into the lane, then go and get bull #43 to spend the night with her.  The cow is one which was in the cull mob, but which I've had second thoughts about after weighing her calf.  I think I'll give her a few days with the bull and if she's pregnant come testing time, she can stay.

Our guests left quite early this morning and the rain fell and then we had some more (by 4pm we'd had 57mm from sometime during the night).  The river had not risen too much, but I was concerned that some of the heavier falls could bring it up quite quickly.  Stephan went and moved the mob from the Pig Paddock near the yards, and sent them on their way to the back of the farm.  I let him ride the bike and take the dog, since he was being the farmer for a change. 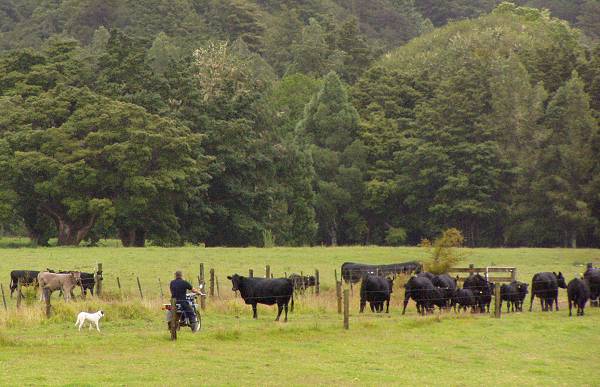 A little later we moved the big mob of without-a-bull cows to the big paddock across the road, where they'll be safe from rising rivers.

Our next guest has arrived: Bloo, who lives in Perth, Australia, has returned for a couple of weeks' stay.  He still has just as much hair. 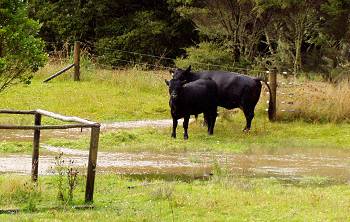 Between 4pm yesterday and 8am this morning we had another 59mm of rain and just before noon, after Stephan and Bloo had gone off to town, the river came up over the bridge and then just kept on rising!

These two cattle in the House Paddock, were looking a little perturbed as the bit of green upon which they were standing kept getting smaller!  They were actually quite safe, just a bit unsettled by all the water, through which they eventually bravely waded. At 5.20pm things were at their worst with the rain still pelting down for short periods.  It wasn't quite as large a flood as that at the end of February 2004, but it was pretty impressive. 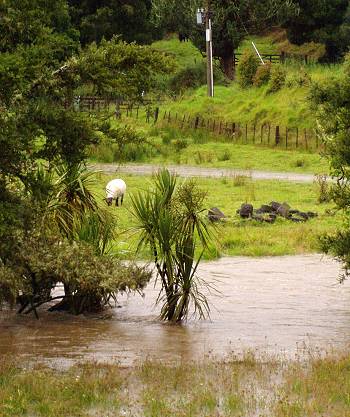 I went (still on crutches - lucky they're waterproof!) up to the chicken paddock to see if I could see the sheep in the Pig Paddock.  Both Damian and Bendy were fine, in the middle of their paddock which had become part of the river, in places.

The river began to recede at about 7.30pm and had gone down enough for Stephan and Bloo to come in by just before 9pm.  It's usually all over quite quickly after the rain stops falling in the hills.

This was an unusual flood in that the main flooding generally happens in the stream which comes down Diggers Valley (the one our bridge actually crosses and that in the picture to the right), but on this occasion, there'd obviously been far more rain in the hills directly behind the farm, so it was that stream which backed up the other and caused water to come across the paddocks in a different way than is usual. 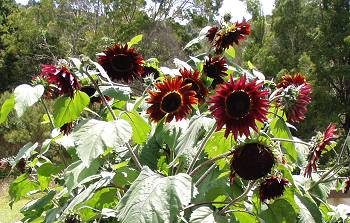 The sun's out, the river's down, it's as if I hadn't been cut off from the rest of humanity for a whole day at all.

Stephan grew these rather large sunflower plants from some seeds Jane next door gave him.  I don't think either of them expected the plants to be quite so large! 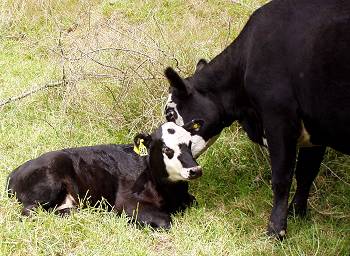 A cute photo.  Two-year-old 470 and her too-small calf 560, by the gate into the paddock over the road, where I went to investigate some excess mooing this morning.