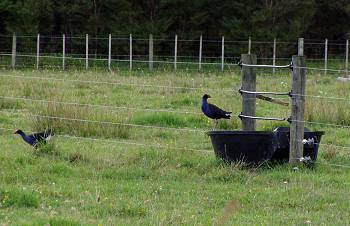 Aha!  That explains why there are so many unmentionables at the bottom of the troughs! 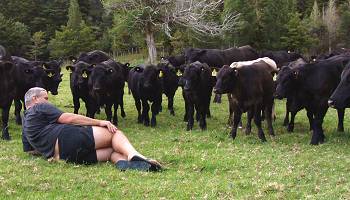 We went out to move the cattle from the Mushroom paddocks around to the pines and while I did a careful check of the rear ends of all the cows (for signs of mating), Stephan did some cattle-whispering.  He had to keep an eye on where Onix and the bull were, since Onix was on heat and the bull was following her with physically active interest!  It would not be safe to lie on the ground too near that sort of carry-on! 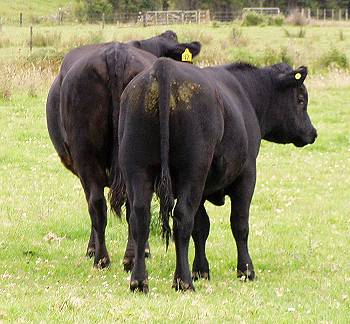 On the job: Dateline 42 AB doing the rounds, checking the cows.  Ingrid 17 wasn't on heat, but the bull had been making sure nothing had changed since the last time he checked.

He's quite a small animal, I think, although I've only seen him with the adult cows for a while, so it may be only my perception.  I'll have to weigh the yearling bulls and see how he compares with the others and what his daily growth pattern has been lately. 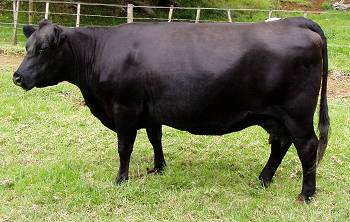 Isla: not pregnant, yet, but gorgeous. 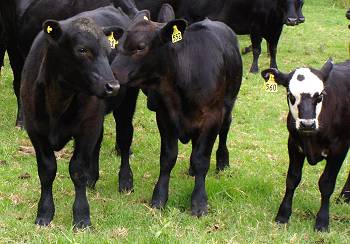 "I'll tell you a secret, but don't tell that little kid!"

The white calf is very cute, but disappointingly small - or I notice her because she's different and maybe on the scales she'll show she's doing better than I think.  She is one of the latest-born calves. 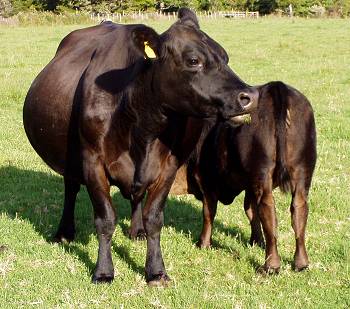 Ms Irene Wide!  What a monster.  She's not in fantastically fat condition or anything, it's just gut-fill.  I suspect that her ability to feed efficiently is not quite as good as it should be because of the interesting state of her teeth: they're very gappy and have been for as long as I've known her - there are none missing, and I'm not sure why they're so widely spaced. 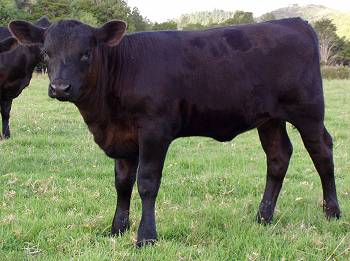 I really like this calf!  I really only noticed how good she's looking in the last couple of days.  I like that she's solid and quite square (bearing in mind she's only eight weeks old today) and has that definite "I'm so great" attitude which give some of them that extra spark and makes me notice them again and again - although I have failed to capture that in this particular picture!

The lambs have not been shorn and it's now too close to the kill-date for two of them to do them this week - there's naturally the risk of some bruising associated with being upended and moved about during shearing, which one does not want on a body about to be eaten, since it detracts from meat quality.

The shorn lamb in the foreground has been called Reception since his birth (his brother, Wedding, will actually remain with us, having been left in possession of his testicles since he looked like he'd make rather a nice ram) and he was shorn at the same time as the ewes a little while ago. 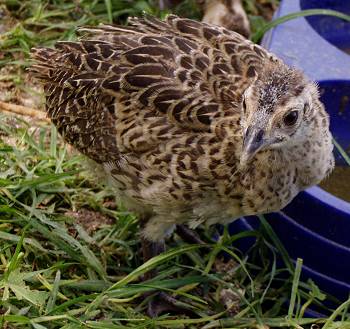 One of the Pheasant chicks, which are doing very well in their kitten-excluding cage. 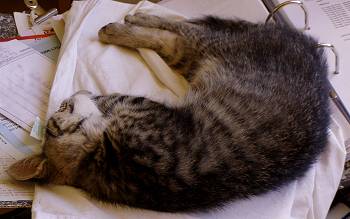 Master Kitten (as yet still unnamed) is starting to make himself entirely at home!  My office is wonderfully warm and sunny in the afternoons (rather too warm at this time of the year!) and terribly untidy still, so full of nice places to sleep.

Thursday the 1st of February 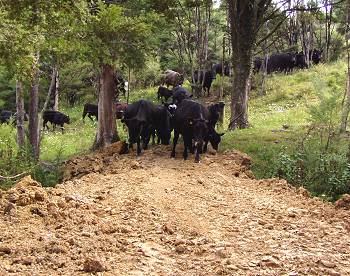 Stephan has fixed, we think, the dreadfully wet culvert crossing out in the Back Barn paddock.  He initially installed a recycled tyre culvert back in 2003 (and the finished view further down that same page) and the culvert itself works well, in that the water it is supposed to allow to flow through it is doing exactly that.  But there's a whole lot of other water coming down the hill, probably from a minor spring, and it is that which flows onto and gathers in the earth covering the original culvert path.

Stephan has now moved some more soil around so that the spring water drains off to the side and the path over the original culvert is raised and firm again and so will hopefully not continue to collect the water which was making it so boggy!

There must be pictures within this site of the cattle crossing the culvert, sinking up to their bellies as they struggle across, but I'm currently unable to find them.  I've always feared that any of them may get too bogged to continue, or be caught up in a rush of others also trying to cross, but fortunately that has never happened.  We shall see whether or not the most recent alterations to the culvert work or not when we get into the wetter times of the year - although this is already a vast improvement to the situation, since there was still a lot of water caught in the deep hoof-holes, which continued to make the whole pathway muddy, despite the dryness of recent weeks. 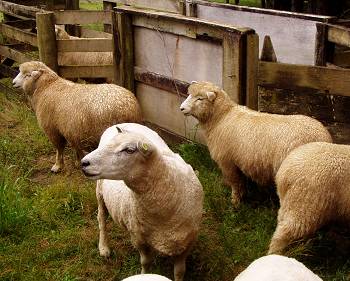 My youngest sister is getting married tomorrow and when she began planning her wedding, she asked us to do a lamb or two on the spit.  We borrowed the ram, bred the ewes, the lambs were born and we've been watching them grow and hoping they'd be grown enough to feed the ever-expanding guest list on the day!

Early this morning Stephan got the sheep in and selected the three largest lambs and killed two of them.  The third remained in the little pen at the top of the photo, like some poor soul on death-row, waiting while we looked at the two carcases and tried to calculate how many they'd feed and whether or not we could fit three on the spit at once or not. 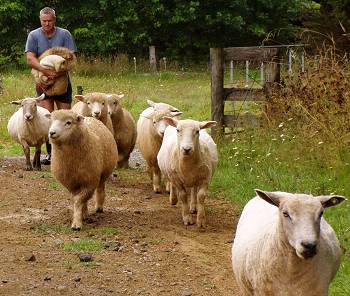 Lucky lamb, we figured three would be too many and I was not prepared to risk too much left over, since there will be no mains electricity nor refrigeration available at the wedding.  It is my feeling that if one is going to kill other creatures to eat, then one must do them the honour of using them well.  Waste would be inexcusable.

Stephan is carrying the skins from both lambs: one shorn and one woolly.  We put them in the freezer for processing later.

Stephan then took the two carcases down the road to spend the day and night in a chiller, owned and kindly offered by Jim, whom we wave to and occasionally stop and talk to on our way to and from town. 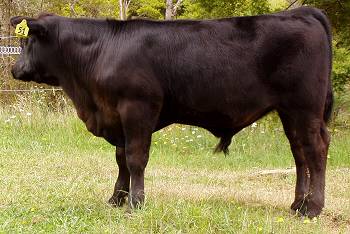 We went in to town (Kaitaia) for a few last-minute things and while there, I ruptured a muscle in the back of my right calf!  Since we were there, we shot over to the doctors' surgery, which happened to be very quiet for a change, and my usual doctor was able to confirm what I'd done, wrap my leg up in a bandage to hold an ice-pack on it for a while and told me I'd need to use crutches for several days and take it easy for many more!  Great timing ... I think not.  I have a wedding to attend, cattle to organise, a farm to run ...