It's so nice to be home!

My first task today, before I could go out and look closely at my lovely animals, was to go into town to the Little Theatre to recommence rehearsals of a play which I have been directing for the last little while.  Actually it's been more than a little while!  This project started back in March, just after we'd got the Royal New Zealand Ballet Tutus on Tour out of the way.  The Kaitaia Dramatic Society has been having a quiet time for a couple of years, since Stephan was last on stage three times in one year, that last play being April Phillips' STiFF.  Early this year we attempted to get a workshop for keen prospective play directors organised and failed, but our prospective tutor had found a play which he had intended to use for director training, which we read and liked and Stephan decided he'd have a go at directing it on his own.  We held auditions, realised there weren't enough men, had to sacrifice Stephan to a part in the play and beg another to join and I ended up taking over the direction, something I've not done before either.

We had planned to perform the play in early June, but along the way one of the male actors decided he was unsuited to his role and left, so we had to find someone else to take his part.  I'd had doubts about one of the other men and had lined up an understudy, but had to use him in place of the other fellow instead.  The recasting and people's various commitments meant that we had to delay our performance plans by a month and on seeing the cast rehearse today, it became clear that some serious commitment would be needed by all in rehearsals over the next week, if we were indeed to go on stage as planned!  I obtained the committed agreement of all the cast that they'd make this their priority during the week and planned technical and dress rehearsals for next weekend.

Stephan has looked after the cattle very well, so I didn't feel an urgent need to go and sight them all myself, but some needed moving and I wanted to check on grass growth, cow condition and so on.
At the bottom of the Big Back paddock, was one cow, all alone: white-faced 307 was quietly grazing, so I let her out through the gate, then stood around calling the others.  Gradually most of them appeared, trotting down the hill.  Later, when I spoke with Stephan, I realised that the gate through to the Middle Back paddock was still open, so most of them must have been in there and a couple either didn't hear, or ignored, my calls. 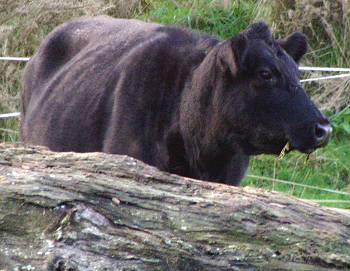 Here's Isla, when she arrived at the bottom of the hill.

Before I went away, I made arrangements for the cull cows to go as soon as possible after I returned, so they're booked on a truck on Tuesday.  That meant that we needed to get them in and put the Direct-to-Slaughter tags in the ears of those which have either the old pre-new-tagging-scheme tags, no tags because theirs have fallen out, or new tags with the front bits broken off, as seems to be happening with annoying frequency in our Allflex tags!  It is the front part of the tag, with the official stamp and barcode on it, which is legally required.  359's front bit fell off the other day and Stephan found it while I was away, nowhere near any sort of rubbing place, so I suspect a tag fault which will probably be very hard to get the manufacturers to accept.

I sent the 22 cows which now form the "fat cow" mob off to the Flat 4 paddock and then put the two bulls which are to go off with the cows to the works in with them and they went to Flat 2, so the two mobs could at least still hear and see each other, in case there were things they'd left unsaid.

I travelled down to Okaihau this morning, a fairly cold one, for a Women in Ag inside day with a lawyer and an accountant, there to tell us all about Trusts and various other things we might want to know as resource-rich people.  It was a good day which increased my awareness of various legal tools and entities which are probably not of any immediate use to me.  I think.  Planning what to do with this place in the long term is something we give thought to at times, so we continue to gather such information.

On my way home, I received a text message on the mobile phone from one of the male actors in the play, saying he couldn't come to rehearsal.  Having the firm impression that the cast needed all the rehearsal they could get, this caused me some anxiety.  The men were to have had a rehearsal of their part of the play on their own this evening and it was this cast member who most needed it!

Sometime just before 10pm I had a sudden gut-wrenching realisation that I'd completely forgotten to organise the necessary paper-work to have the livers of the cull cows tested for their trace-element status at the works!  I put in a call to the duty vet to have a chat and didn't hear anything back, so in the end came to the conclusion that I'd have to keep four of the cows back in the morning and they'll have to go off on the next available trip instead, with the forms arranged!  On one other occasion I tried to get this sorted out at the last minute and the tests didn't get done; this year I really do want to check the cows' copper status in particular, so I'm not taking any chances. 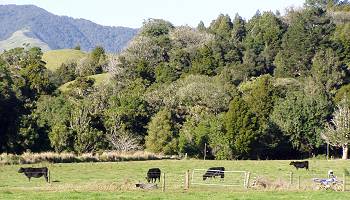 99, 341, 421 and 452 left behind for another week's peaceful grazing, while their former paddock-mates went down to the yards and then away on a truck to the Moerewa AFFCo works.

In my currently-elevated state of stress, I completely forgot to put the cattle up the race to paint a mark on their backs (the works prefer it so they can identify lines of cattle arriving as from one farm or owner) and I'd therefore not done that last little thing I do before they go away: I always stroke and thank them.  It's part of my own ritual, since in nearly every case these days I've watched them born, watched them grow, watched matings or done inseminations, watched them give birth, often many times, and have come to know them as individuals and wordless colleagues.  I go through an emotionally painful process every year at this time which, in some ways gets easier with familiarity, but in others, more and more difficult.  In a couple of weeks I will think of them fondly and without distress, but during the going, the time of travelling and their "processing" at the works, I am disturbed.  I am always aware that for these cattle a quick and humanely effected death is presumably better than some of the things which might happen to them, but am also acutely conscious that it is on my decision that their lives are ended.  This year has been particularly hard, because I had decided it was time to "bite the bullet" on a number of the older cows which have been, mostly, very good producers, but which because of their breeding are being superseded by improved daughters - and I've kept most of the heifers this year because they're looking so good.

The animals which went today were:

At 3pm on this rather emotionally trying day, I received a text message on my phone from the unreliable actor chap telling me he had other plans for this evening.  I stood in the paddock and shook with fury!  The guy had been reading a book at every opportunity at the rehearsal on Saturday and it now appeared that he'd not actually taken any notice of the following discussion about the necessity for everyone to throw themselves into rehearsals this week for the play to go on, despite his assurance that he would be available at the times we all agreed to.  Unbelievable.

The dramatic society committee met this evening and discussed what to do.  One of the others spoke to the guy who'd let us down and discovered that he had other plans for the time of Sunday's planned dress rehearsal as well.  Everyone else has put so much of themselves and their time into this play; I find it hard to fathom this demonstrated lack of respect for us all.

The decision was eventually made to continue and I stepped in, again, to the role of the absent cast member, for the night's rehearsal. 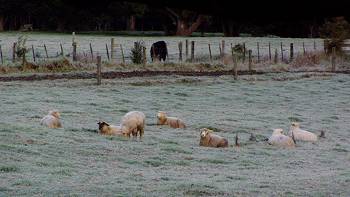 Our first frost!  The temperature only went down to
-1°C, but I suspect it was under zero for some time, because there was ice on water containers outside the house which was thicker than window glass!  I also eventually worked out why I had no running water - the pipe had frozen.  I did not venture further afield to see if the troughs were frozen over: the cattle can't have been so thirsty that I needed to make such a cold sacrifice and the sun came out later and thawed everything out.

The day did not end well, with some appalling behaviour from one of my cast members - you'd never guess it's the same one referred to all the way through this week, would you?  Rude and threatening conduct are not what I expect to deal with when involved in artistic pursuits!

After last night's play-related carry-on, for the sake of everyone else's potential stress levels and to provide the best chance for a good rehearsal, I decided to hand tonight's one over to someone else - the play is so near "finished" that my job as director is virtually done.  I stayed home for the first week-night in many weeks and watched television!