I'm not sure which family this is, but the ducklings are about ten days old.  They could be Ms Duck's siblings, but are a fair way away from the nest of her parents, so perhaps there's yet another pair of ducks nesting on the flats somewhere. 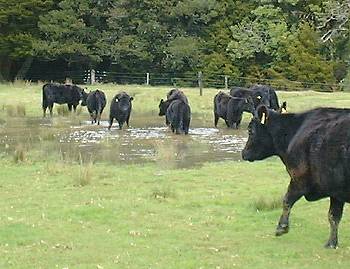 The yearling heifers and the three adult cattle with them, spent a night in a small area near our house, where I've recently planted several native tree seedlings.  I put a two-strand electric tape fence around the area where the trees are planted, but awoke several times in the night with horror-filled thoughts of the cattle having pushed through and eaten all my trees - for all the good that did me, in the dark!  They were nearly all where they should have been in the morning, other than Demelza, who had pushed over a makeshift gate and was browsing near the beleaguered lemon tree.  This afternoon we walked them out to one of the flats paddocks and they went completely silly, dashing up and down the paddock, settling down eventually when they found this large puddle formed as a result of last night's rain. 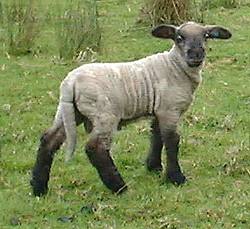 After leaving the newly-docked lambs and ewes to settle for a night, we brought them through to mix with the rest of the flock.  Things got very noisy for a while, while the lambs tried to figure out which of the suddenly-increased number of ewes was the right one for them.

This is Minty's ram lamb.

My mother, Jill, on the telephone this afternoon, wickedly tried to trap me with a seemingly innocent "oh, and when will Isla calve?" ... some people will do anything to win a hat!  (See below.) 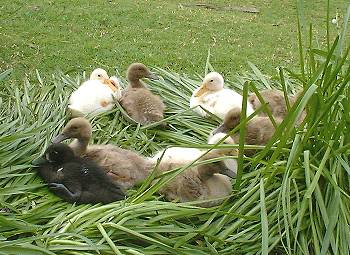 The ducklings spend much of their time free ranging around the house now, only being shut in their cage during feeding time, to prevent the adult birds from stealing all their food.  Snowdrop plants obviously make a nice mattress. 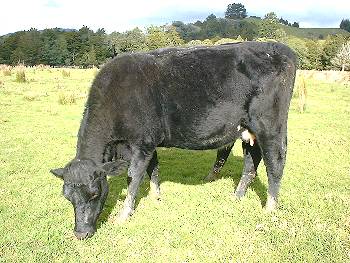 Two of the 2½-year-old heifers are getting quite close to calving, by the look of them, so I drafted them out of their mob and brought them into their own paddock, where I could keep a close eye on them and provide a little extra feed.  They're both in this picture, but only the feet of 396 are visible.  My calving-date table tells me they're due from the 2nd and 4th of October, but as both are in calf to Quadrille, whose calves' gestation is often shorter than usual, I thought it best to have them where I can find them easily. 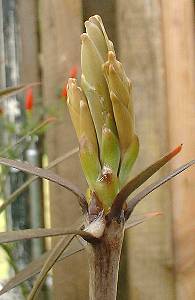 This is the new shoot emerging from the top of one of the Kauri seedlings in my greenhouse.  I've never observed this process so closely before, so am taking pictures of it whenever I remember to do so. 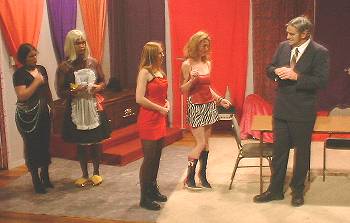 I went to the theatre this evening with Stephan for what was effectively a dress rehearsal and laughed my socks off. 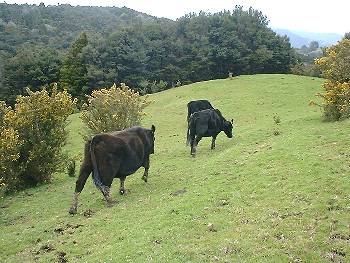 The pregnant cows and heifers are currently in four mobs, one of which is out at the back of the farm.  Three of those cows are on my list as being expected to calve sometime before 11 October, so I went out to fetch them.  Queenly, the left-most cow pictured, was the first to be inseminated last summer, so could theoretically calve from today, although I think she's more likely to wait until around the 5th of October.  I followed her slowly down the hill, since she has a stiff (probably arthritic) hip or stifle joint and I don't like to make her go anywhere faster than she wishes.  There were two other cows on my list and then I spotted one which wasn't, but has been showing some definite udder development over the last week or so, which I'd watched with some surprise, but by today it was obvious that she is a great deal closer to calving than I calculated. 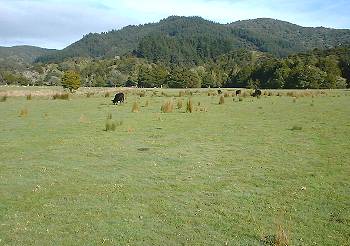 The paddock we call Flat 1: the first one out across the flats from the front of the farm.  This is one of the areas I oversowed with rye seed last autumn, hoping it would provide some early spring grass, which it has indeed begun to do.  I've spent some time in the last few weeks wandering around with the weed wiper - a hockey-stick shaped tube with rope wicks on the bottom - applying herbicide to the rushes, some of which are obviously dying in this picture.

This is where the pregnant cows are grazing, now numbering ten, after we brought another four in from the mob which are currently over the road on the hill. 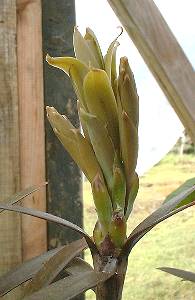 The Kauri seedling three days on. 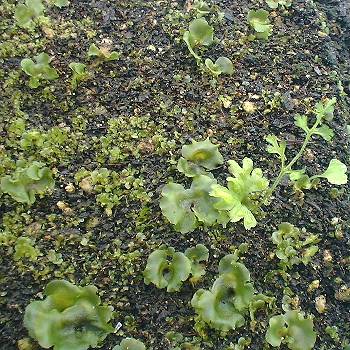 The other really interesting thing going on in the greenhouse at the moment is the growth of these tiny plants.  Several months ago I collected a tree-fern frond which had ripe spores on its underside, and sprinkled them on some sterile seed-raising mix, then left it under a plastic covering.  It appeared that all I had managed to grow was some algae, so I just left it all alone and occasionally checked it.  More recently these liverwort-like forms have appeared and from them have unfurled the tiniest fern fronds.  I shall continue to watch with interest!

Friday the 1st of October

Stephan's play, "STiFF" opened tonight and went very successfully.  I starred as the ticket-office attendant again, but nobody applauded.  Stephan, in the mean time, is loving the limelight and plays the part of the nasty, greasy funeral director's assistant very well.  My favourite character is Sherry, a not-too-bright young woman whose one-liners are extremely funny and so well delivered by Shannon Avery.

Angel Delight inherits a funeral parlour from her previously unknown father, to the utter disgust of Robert Swipe, Mr Wither's loyal and long-serving assistant.  Angel brings her friends to see her new acquisition: Sherry, Roxanne (a dominatrix), Delilah (transvestite) and between them they decide to run a brothel, under the cover of the funeral parlour, because to keep her inheritance, Angel must continue the business in the family name for at least five years and brothel-keeping is a job for which she has the appropriate experience.  R.Swipe causes all sorts of bother, turning up at inappropriate moments, trying to catch Angel out because the business will revert to him if she fails.  One of Roxanne's clients (a High Court judge) dies in the midst of a "treatment" and so Angel and friends must embalm and bury him, but then it all goes horribly wrong!

It's a terribly irreverent load of nonsense and extremely funny.