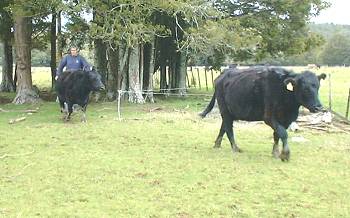 Maunu Sybil 808 AB, one of the four stud cows I bought last year, suddenly appears a lot thinner than she did a couple of weeks ago, much more so than the other cows in her mob.  I gradually drafted the rest of the cows out to a fresh paddock this afternoon and then shifted Sybil with the young heifers, Ivy and 356.  Sybil had twins at her third calving, so I'm now wondering if she has an extra calf on board, which may be consuming more of her resources than is the case for the other cows.  Ivy, two years ago, suddenly lost a great deal of condition in her last few weeks of pregnancy, then produced twins.

And now, without further ado, we shall open ... 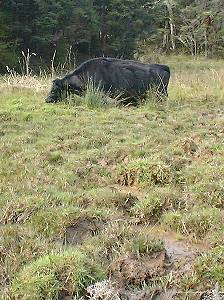 The same cow as last week, in a different swamp.  Some of the cattle have quite noticeable habits, like this willingness to climb around in the swampiest areas in the hunt for the lush grasses which grow there. 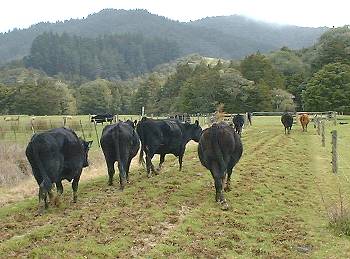 I seem to have spent all week shifting cows.  After a few warm nights and days, the grass has started to grow, much to my great relief.  The cows now in the latter stages of pregnancy, require more feed than before so I've been moving them around to find it.  Yesterday these cows had their second copper injection for the winter and then I sent them to the very back of the farm for the last few days before I need to retrieve the earliest calvers and bring them back closer to home. 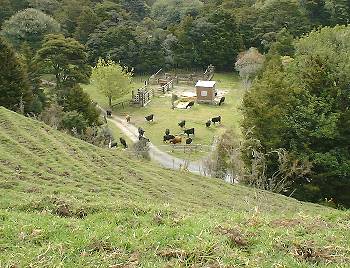 The other half of the cow herd had their copper injections a couple of weeks ago and needed their liver-fluke pour-on drench, which required a bit of careful weather-watching by me, since the $8 per cow may as well have been poured on the ground if it were to rain too soon after it was applied to the animals.  I'm not usually much of a gambler, but realised I had $200 riding on whether or not I'd correctly assessed the situation - a slightly greater wager than whether or not one's washing will get wet!
Then I walked up the hill over the road, to see how much the grass had grown during the paddock's 10 days' break, but having few options, decided to go ahead and put the cows in there.  I'm beginning to wonder about the appropriateness of our stocking rate: I don't like being this short of feed for the animals, particularly at this time of the year.  We're carrying around the same number of stock as we usually do, but the constitution of the herd is different: there are 48 pregnant cows and heifers, far fewer large steers, but I've fed the yearling heifers better than usual; so I'm juggling things in a different way than in previous years.

I docked the rest of the lambs this afternoon, although it took two attempts to get them out of the paddock - the greediest maize-crazed ewes left five of their lambs behind in the paddock the first time, so I had to get Stephan to give me a hand later on in the day, to catch the ones I'd not done earlier.

There are two ram lambs without rings on their scrota: one seems to have only one testicle and despite some gentle investigation, I couldn't find the other, so I'll have another look at him when we next get them near the yards and ring him then; the other is Minty's son who is of course ¾ Suffolk and is to go off to live with Lynn and Kees (who bought the Suffolk ram from us a couple of months ago, but have since lost him to dog attacks) as soon as he's weaned.