The week beginning 20th of September, 2003
Saturday the 20th

A list of the entries received is available at the bottom of this page.

Late last night, our holiday boy, Sebastian, arrived with his mum, Kursty, and this afternoon Stephan's nephew, Jonathan visited and joined us all for a walk out to the back of the farm to check on the young cattle.  We set out across the field and were pursued at a wobbly run by a small, bent lamb.  We tried to run away from him, attempted to leave him behind gates and in the end just had to take him with us, for fear that he'd otherwise get lost.  We took turns carrying him. 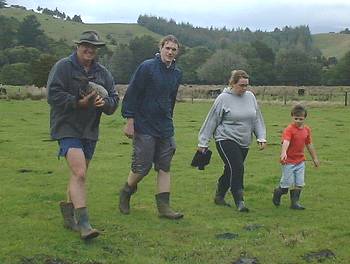 Isla's udder is rapidly growing in size and firmness and she's getting a bit temperamental, but remains in one piece as she approaches "the fullness of time". 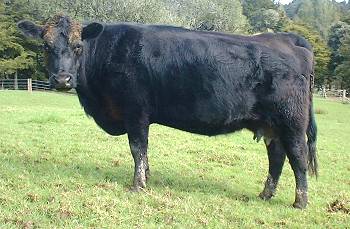 This morning as this photo was taken, there was still only one calf in the cows' paddock, but #103 was in labour as Kursty and I watched, and she later produced this season's first bull calf.  The afternoon was very cold, with rain and a southerly wind and when Stephan, Sebastian and I went out for a walk to have a look at the new calf, we found him alone in one part of the paddock, his mother some distance away, convinced the earlier-born heifer was really her calf.  I manoeuvred them back together and down a slope out of the wind and left them to do some much-needed bonding.

This morning three new calves!  Heifer #344 had a bull, and #349, who I'd not thought on the point of calving, produced a heifer, not long before Sebastian and I went for our early-morning walk.  In the cows' paddock a sight which brought me some relief (after a nasty moment wondering if the inert black lump was actually a live calf) ... 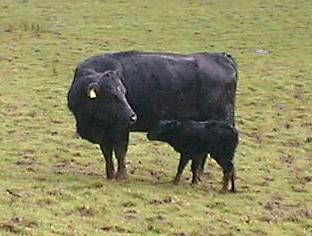 ... Virago Quean 03 and her second bull calf.  I'd been a little worried about Quean, after she had had some sort of problem with calving the first time round, eighteen months ago.  We assisted her on that occasion - or rather, the vet did on our behalf - and I hoped that all would be well this time round, which it has proved to be. 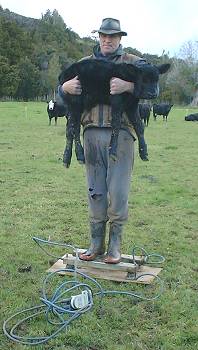 Later we carried the working parts of the cattle scales out across the farm to weigh the new calf.  He created a large warm wet patch all down Stephan's front as he was held, but since Stephan hadn't really dressed up for the occasion, it hardly mattered.  The calf weighed 32kg, and will be #19 in the stud herd.

We only weigh the stud calves specifically at this stage, needing their birthweights for submission to the NZ Angus Association for calculation of their EBV (Estimated Breeding Value) figures.  If we could have easily caught any of the other calves, we would have weighed them too, since the earlier I get a weight, the more reliable their growth-rate data during their early lives.

It being a fine day, we decided to get the bulls and the last of the heifers and Ivy in for their Liver Fluke drench, so we could finish with the scales for a little while, and they could be taken out and left somewhere near the next stud calf's likely birth-place.

The other overdue job (something I couldn't do when my feet were in plaster and have been putting off since) was the recording of the young bulls' heights and scrotal measurements - an exciting job, you may imagine!  Because we both need to have our wits about us when I'm doing that, there are no pictures - not that there's much to see, just me with a bit of fabric tape and some careful feeling around in the dark of the nether regions of a couple of bulls.  Crispin has a mighty set of testicles!

Taking the bulls back to their paddock was going really easily, until they got to a gateway at the start of the lane and Lendrich turned and rushed back after Quadrille.  Bulls can really move fast!  I decided I'd better split them up, so off we went again, Lendrich and the young boys ahead of me and Quadrille behind, growling and sounding very fierce. 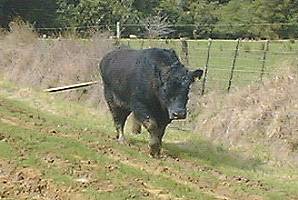 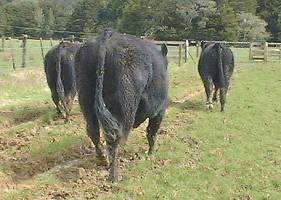 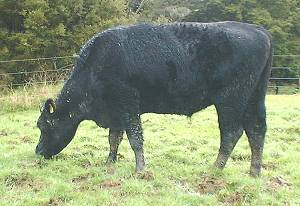 The sick steer, who has spent the last week and a half alone in a paddock close to the house, joined Ivy, Abigail and the other two young heifers as they came into the yards to get weighed and drenched.  I wanted to weigh the steer again, since we'd done so at his sickest, to see how much weight he'd regained since.  On Monday last, after the vet had seen him, he weighed 360kg and today, 418kg, a 58kg gain in eight days!  About 10% of an animal's weight will be the feed in its gut, and when he was very sick, he would not have been eating for a couple of days, and probably hadn't been drinking much either.  His expected weight is over 500kg, so he's still very light, but appears to be making good progress.

While we were busy doing all that, another calf... 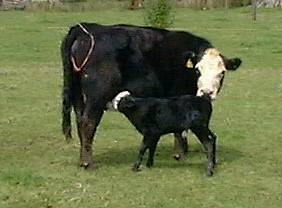 ... the first white-face calf for this year.  I wasn't sure if we'd have any or not, since this calf is 75% Angus, but the white face still comes through very strongly in some families.  #307 had a similar calf last year, with the same bull. 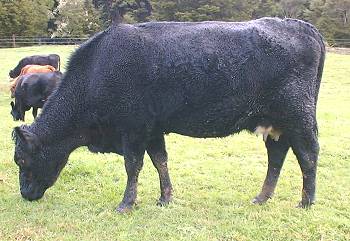 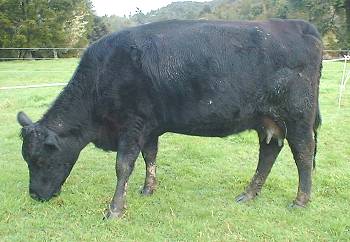 The two cows I'm watching most interestedly: Onix on the left, on Issa's behalf (Issa is my nephew, who owns Onix) and Isla, because she's my favourite in all the world and because there's a list of people at the bottom of the page, waiting to find out when she calves!

This afternoon we had some visitors, including my little niece, Stella, who I haven't seen for six months.  She thought the sheep in particular, were wonderful. 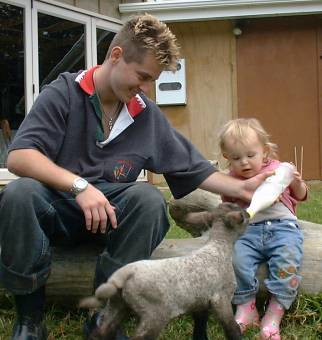 During the morning, I looked across the paddock and noticed a cow obviously in labour, so I went and collected Sebastian from where he and Stephan were working, and we walked out to have a look. 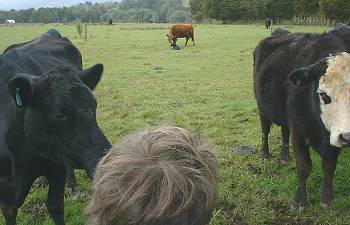 Because Bendy the lamb had insisted on following us (he can run pretty fast these days!) the cows were quite interested in our little group.  I don't think they were quite sure what he was and they're all a bit nervous of anything which looks like a dog, at this particular time of the year.

When Sebastian and I arrived in the cows' paddock for the early morning check, we found #74 with a heifer calf, and #94, who we'd only brought down off the hill over the road yesterday evening, was in labour... 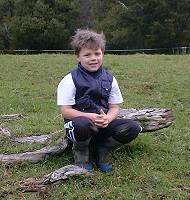 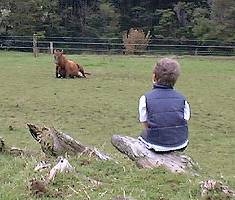 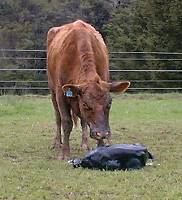 ... and the calf is the first heifer this cow has produced, after three bulls.  #94 is half Angus and a quarter each of Jersey and Hereford.

A couple of hours later, I could hear some disturbance from the direction of the cows' paddock, so had a look through the binoculars to see what was going on.  I could see a cow in the process of having her calf, so we walked back out there again, to see what was happening.  The cause of the noise turned out to be #94 being all upset because her calf had gone to sleep on the other side of a fence, and by the time we arrived in the paddock, we discovered Onix, just cleaning up her brand new heifer calf. 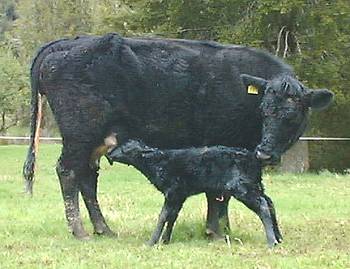 This was a much faster calving than the first time, when she had Sapphire.  You can see photos from then on Onix's calving page.

We watched Onix and her calf for quite a while, taking lots of pictures for Issa, and then Sebastian wanted us to have a picture together with Isla. 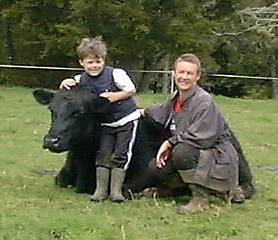 Later in the day, I went out to the back of the farm to check on, and move, the young mob.  They were very keen to leave the paddock they'd been in for more than a week and it's easy to see they were hungry, because instead of racing around and playing as they came through the gate, they all just got down to eating, immediately.

We manage the cattle and the feed as best we can over the winter months and the young animals get the best we are able to provide, until this time of the year, when they are consigned to the back of the farm, while the pregnant animals take over the flatter, closer areas at the front.  The youngest of them look pretty thin by this stage, because they're just not quite getting enough to keep up with the growth spurt they appear to go through as yearlings, but as soon as the grass becomes available, their growth-rates markedly increase and I hope several of them this year, may put on enough weight and condition to be ready for mating at 15 months of age.  The older animals hold their condition better through the lean months, but they too really pack on weight as soon as the spring/summer grass is available.

Stephan used to make hay on the farm, but we presently have no storage facilities for hay, so we just have to ensure we don't try to carry too many animals through the winter when we can't grow much grass.

Here are the entries received:

Thanks to all those who entered.  I was very careful, in the interests of fairness to all, not to provide any other detail than what was available here, to anyone locally.  Just for fun, I made my own guess early in the piece, so I wouldn't be influenced by Isla's physical changes as she neared calving.  Having watched her udder development over the last few days, I would hold out more hope for those who guessed she'd calve early, rather than later in the possible period.