Moon-rise on the night before Full Moon. 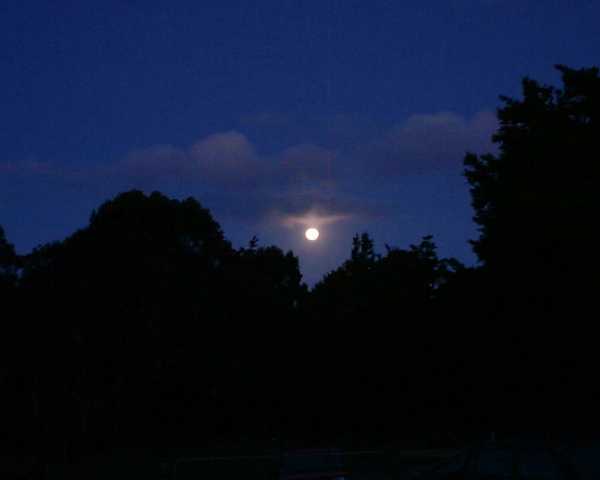 Another unexpected visitor of the avian variety, this one rather violently flying into a glass panel in the back porch.  Where it thought it was going, I don't know!  After leaving an unsightly mess on the window, this Kotare (Kingfisher) fell to the floor, completely stunned.  Often such birds will recover if kept warm and quiet for a time, so I picked it up and brought it in.
I don't recall ever seeing one so closely before.  I was surprised at how long the beak is. 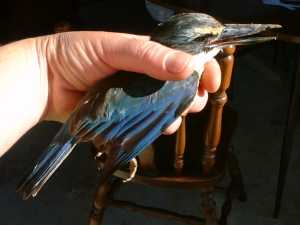 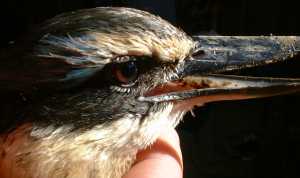 After a few minutes of looking rather dozy, it began to show more signs of life, so I put it on a sunny branch of the Puriri tree outside, out of reach of Foxton Beach cat, who just loves to stalk birds!  About ten minutes later it flew off into the bush. 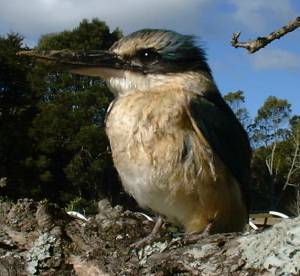 We had the first death of the season today, as #14's heifer calf was warm although no longer alive, by the time I found them this afternoon.  I don't know what happened, whether perhaps the calf came out backwards, or the birth was complicated in some other way which caused too much stress for the calf.  I was greatly looking forward to seeing this one, being the first from a rather nice bull I've not used before, bought via one of the semen catalogues and #14 being the best producer of all the commercial cows here.
She has two daughters yet to calve, her first is in-calf to the same bull and the youngest, another of the two-year-olds, is in-calf to Quadrille 07. 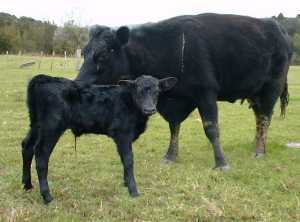 For those who have entered the Isla Sweepstake 2002, here she is, watching the end of the birthing process above, the eating of the afterbirth.  I often wonder how much memory and conciousness cows have of their own life-experiences and whether or not her interest has anything to do with her own impending event.  As you can see, she has no calf yet, but her udder is firming up and, if she had calved after the same number of days as she did last year, she would have done so by yesterday. 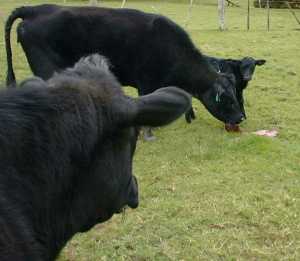 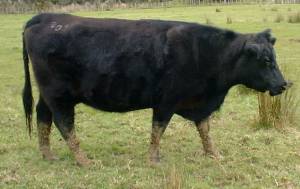 Being school holidays, we have the pleasure of visitors.  Iphigenie and Ishani have come to stay for a few days.  Ishani lives in Germany and is visiting Aotearoa (NZ) for a few months.  Feeding lambs and brushing cows are not familiar activities, but she has courageously volunteered for both! 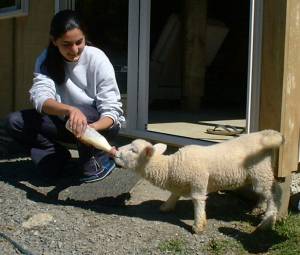 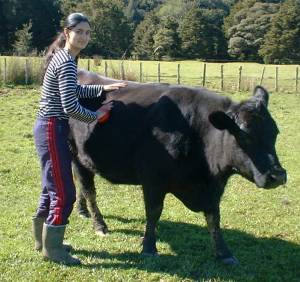 While out walking and checking on the cows and newborn calves, Ishani and I came across a family of wild pigs, who didn't seem to realise we were watching them until we got quite close, and then they ran away.............

When I got home, I phoned our friendly pig hunters and told them we had unwanted visitors and they came out hunting.  It didn't take them long to find the sow and so she is no more. 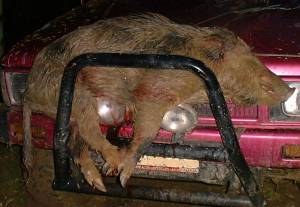