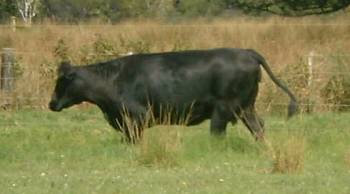 A very typical look for a heifer as she begins her labour... tail out, pacing the paddock.
At this very minute, now 11.28am, she is sitting at the end of the paddock, so I'm off up there with the camera.... more soon. 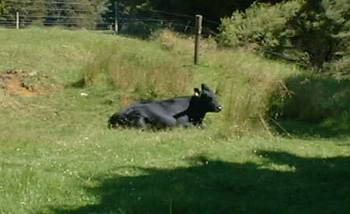 The weather is perfect, a mostly cear, blue sky, with a "wandering" breeze, which might
actually qualify as wind from time to time, but it's very warm. 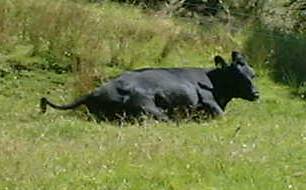 12.08pm
In this position for ages, Onix just quietly had lots of contractions
which really didn't seem to be doing anything at all. 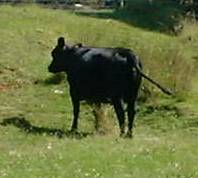 12.53pm
Then she got up and moved to a different spot.   She seemed quite keen
to be nearer the other heifer who was sitting further up the bank. 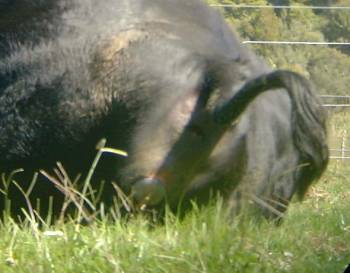 12.59pm
After a few more contractions, this membrane appeared and then, just as I took the next photo, it burst.... 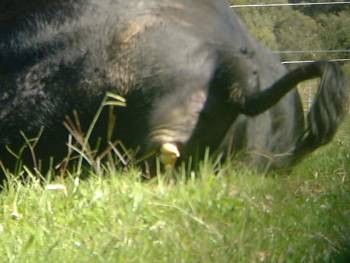 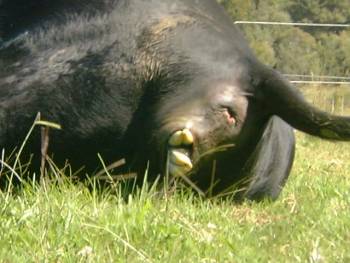 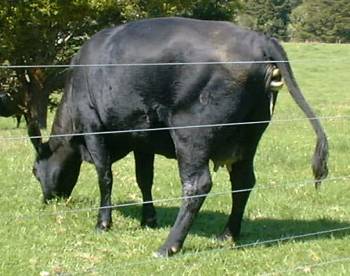 1.21pm
Onix stood and licked the ground for ages, cleaning up the fluid which had poured out when the first membrane broke.
She sat down to get on with things at one point, but was startled by the cows over the fence, who got all upset
about her calving right next to them. 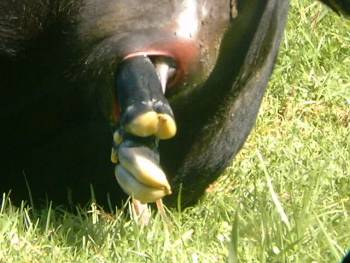 1.49pm
Eventually she lay down and started pushing again.  The whitish looking thing above the foot, is the calf's tongue,
which was sticking way out of it's mouth as the head began to show. 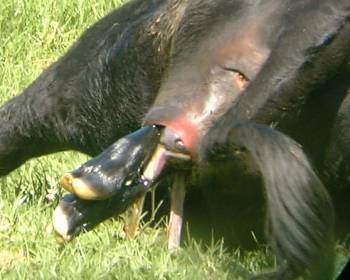 1.56pm
The head is on its side, instead of having the chin resting on the legs.  I wondered if that would cause a problem. 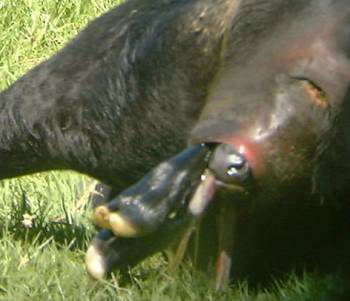 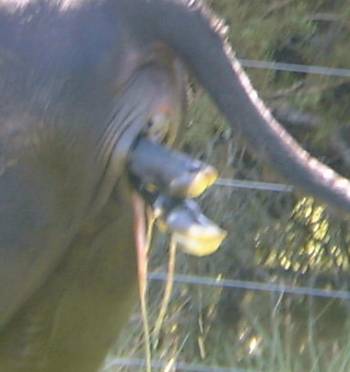 2.01pm
Even when she stood up, the nose was still visible. 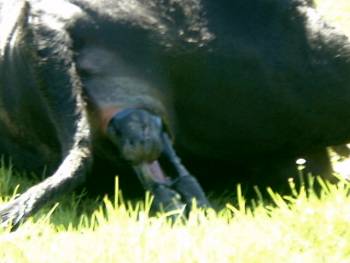 2.07pm
But then things started to move and each push showed more head. 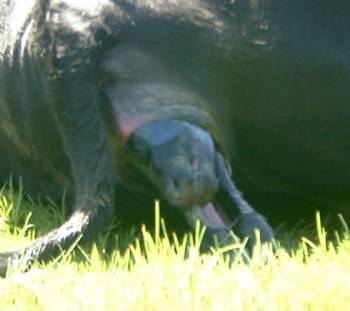 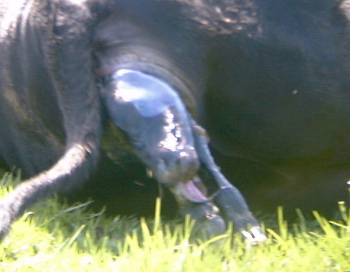 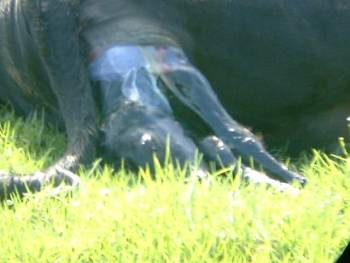 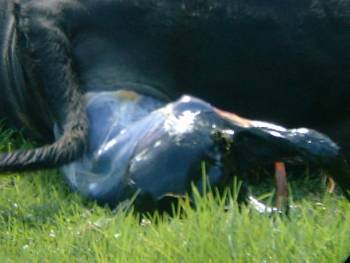 2.08pm
The head folded under as it caught on the ground on the way out. 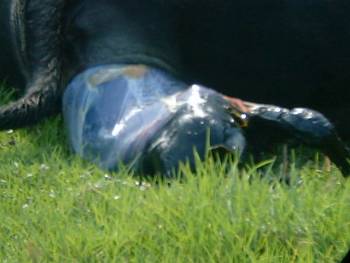 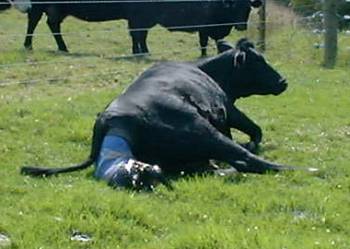 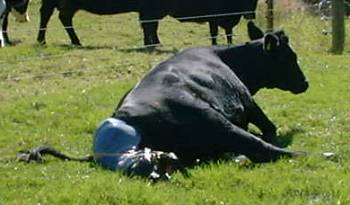 2.09pm
I dashed in and straightened up the head, just to make sure everything was ok.  I could hear the calf breathing,
but it must be easier to get on with life, if you're not lying on your own head!
Onix was quite funny - she seemed to be just sitting there, taking a breath, until she looked back and saw me
and then saw that there was a calf behind her.  She suddenly jumped up and turned to start licking it. 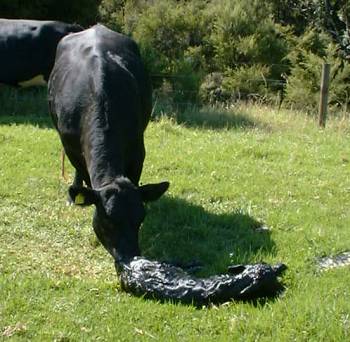 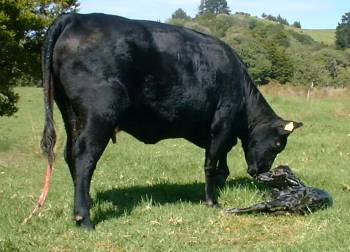 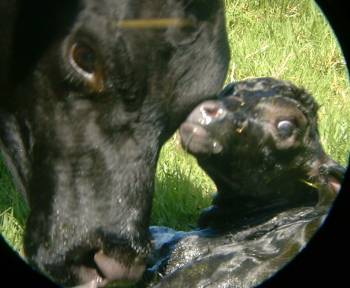 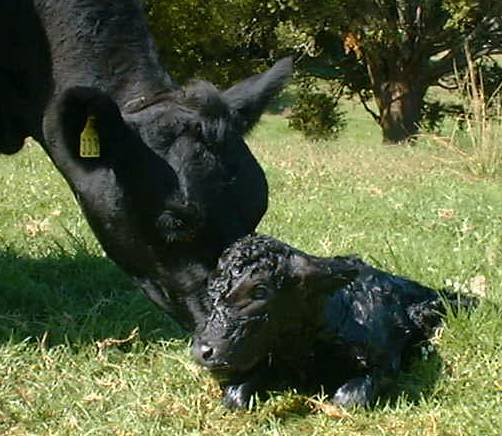 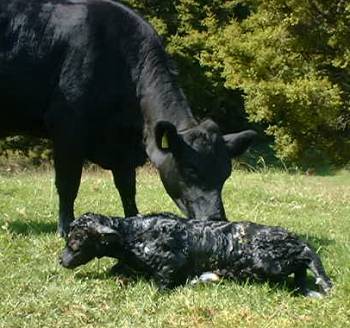 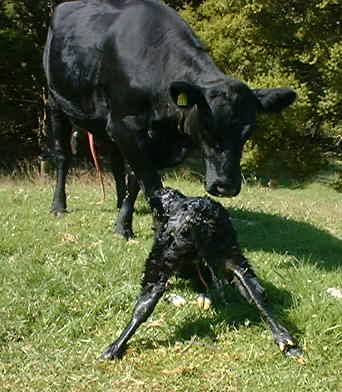 2.24pm
This calf was very quick to start getting on her feet! 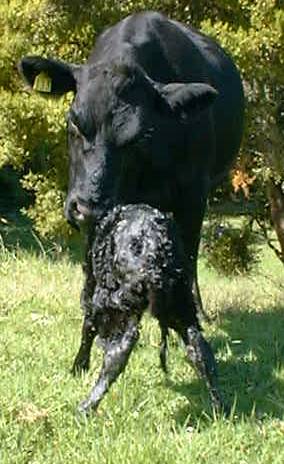 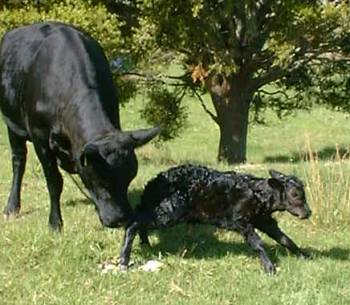 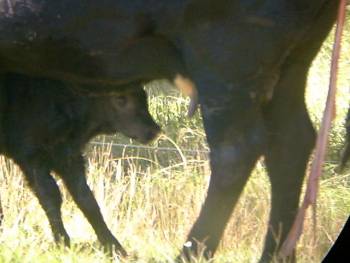 2.40pm
She also knew exactly where she wanted to go. 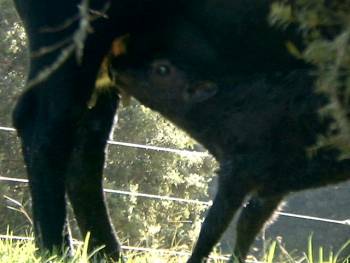 Need more information?  Email us with your questions.