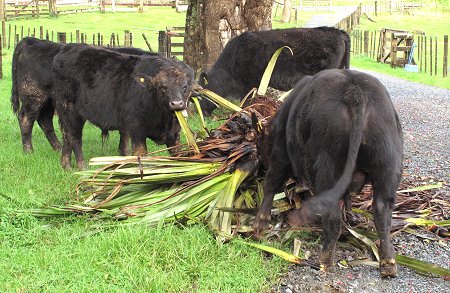 I brought the little mob of bulls (and the now-steer) in to the yards to weigh them, since I plan to sell the two steers.

It's interesting watching the behaviour of the three bulls compared with the one steer in this mob: the bulls are far more excitable. They galloped around the open area near our driveway, burrowing their heads into the earth bank, then when we finally got them over the bridge, they spent several minutes almost demolishing the fallen epiphyte - although the more sensible among them took the opportunity to snack on bits of it instead.

Just as I was weighing the last bull, I noticed the trademark shimmering in the middle of my vision, telling me a migraine was starting. So I went back to the house for a very sugary cup of tea, something to eat and some painkillers, while Stephan went out to get the heifer mob for me - #92 steer is still with them, and the heifers are due for a trip over the scales anyway.

#92 steer went very quietly in with the bulls and the other steer. He hasn't met up with them for months, but they took little notice of him - his having no sex hormones making him beneath their notice, perhaps.

Migraines no longer confine me to bed, fortunately, although they slow me down a lot. When I was a teenager and throughout my early adulthood, migraine pain was excruciating and while some drugs were sometimes effective to a degree, there was nothing I could do but lie down in a dark room until the pain passed, normally about eight to ten hours, from memory. For about the last six or seven years I've continued to get the visual aura, followed usually by only a mild sort of headache, and it is the other surrounding symptoms I now notice more. For instance when a migraine hits I realise it explains a particularly grumpy previous twelve hours, and during its progression I feel as though I cannot speak properly. Afterwards I am tired for two or three days. It would be easier not to suffer migraines at all, but I am thankful that I find them now so much less debilitating than they once were.

Stephan woke me this morning to say that Dotty appeared to be in labour. While the dates I had for her said she was due today, I'd assumed I'd made a mistake, because she had very little udder development. Yesterday she was lying down with her left ear drooping again. I wonder if she's suffering a more serious sort of infection than I had thought? 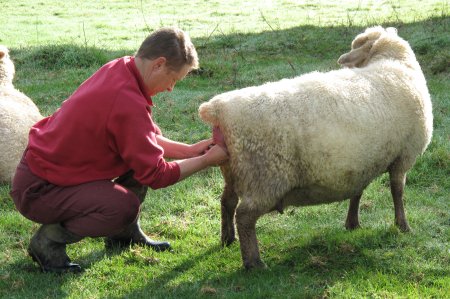 She didn't look to be making particularly good progress, so I went to investigate, finding two feet and a nose presenting together, with the lamb's elbows caught back on Dotty's pelvic rim. I don't know why that happens, but it does in some cases and makes birth either very slow, or impossible. Unsticking the lamb is simply a case of pulling one leg forward at a time, so the shoulders stretch out and there's enough room for them to come through the birth canal.

Dotty was entirely happy to have me investigate and assist while she stood, although she did move to lie down, but simply went around behind me and lay beside my foot. 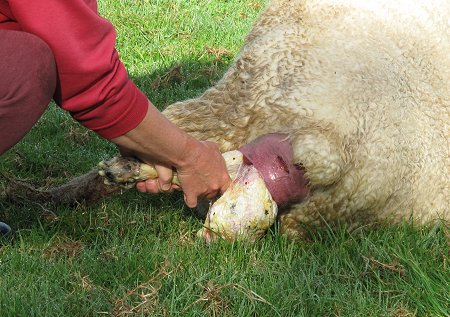 Once the legs were forward, I carried on pulling, since a lamb is better off out once it's positioned correctly. 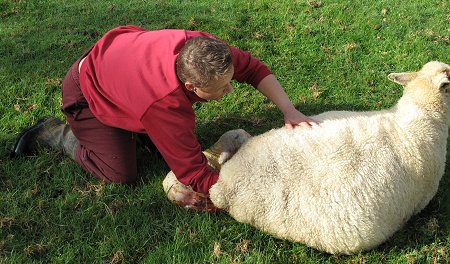 It's always a good idea, when one has assisted a ewe, to check for another lamb/s inside her. When the first lamb has been delayed in its birth, any sibling/s may be in need of rescue without delay.

But despite Dotty's extraordinary width, there were no more lambs inside her. 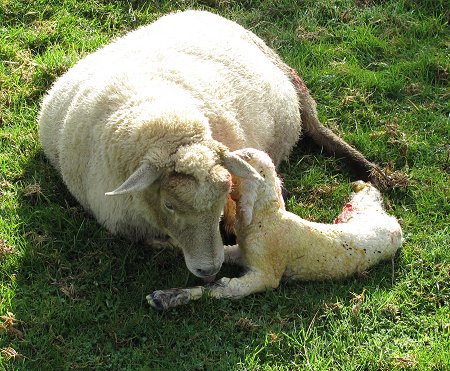 Dotty didn't move in a hurry, so I put the lamb up near her head and left her to compose herself.

Ten minutes later the lamb was up and looking for her first drink. 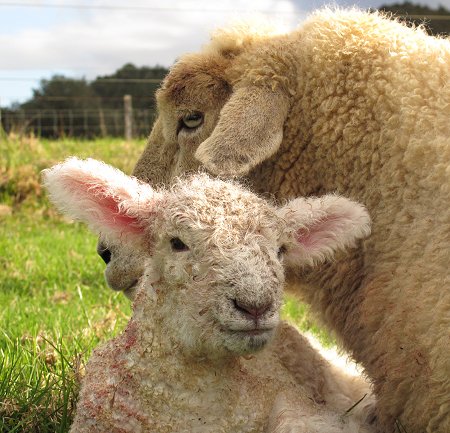 Dotty and her lamb later in the day.

Dotty was still looking a bit off-colour and I wonder if she's sicker than I think. Something is wrong, evidenced by her lack of milk, so I decided to give her a course of antibiotic treatment, as whatever ails her is likely to have a bacterial component. 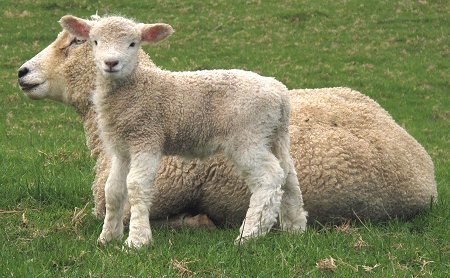 Yvette and her lamb. 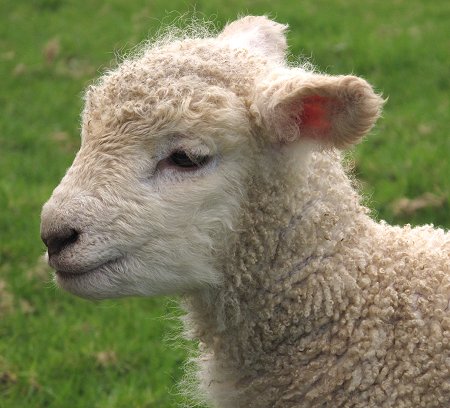 Yvette's lamb, close-up, since lambs are so cute.

We brought the pregnant heifers along the road from the Road Flat paddock this afternoon and for the first time ever, caused a traffic hold-up for three cars. Unbelievable. Occasionally one vehicle might appear while we're walking them along the 400m stretch of winding road, but our guess-work on traffic busy times is usually far better than this. 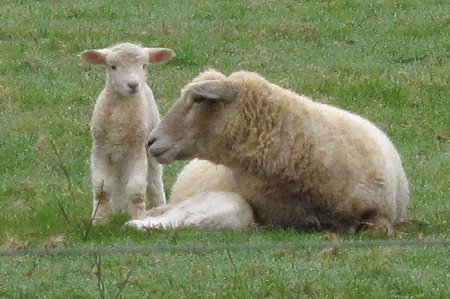 Jewedy, Yvette's lamb, came over to Dotty and her baby to check out the new arrival early this morning. Jewedy has been tearing around the paddock for the last couple of days, playing on her own, so I expect she'll be keen to encourage this new companion to play with her. It won't be long before she'll succeed, I shouldn't think.

Dotty is a very easy sheep to medicate. I gave her a container with a few feed nuts in the bottom and when she put her nose in to eat, I grabbed a bit of her neck wool, plunged a needle into the tented skin and gave her a second Penicillin injection. She hardly flinched. 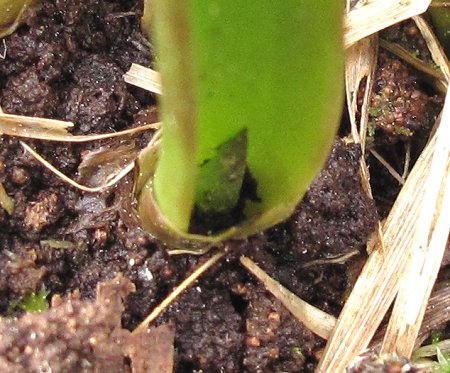 The orchid flower spikes are starting. It's hard to tell how expanded this year's display of flowers might be, at this early stage. 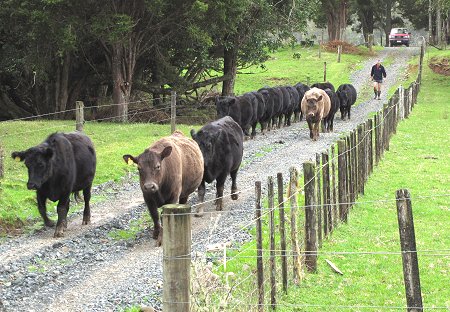 I gave the heifers a copper injection yesterday afternoon, left them quietly overnight to settle and today Stephan and I walked them out to the Middle Back paddock. There is no direct access to the Middle Back so I led and Stephan followed and we went up through the Big Back. The process wasn't quite as easy as that sounds, because as soon as they were in the Big Back paddock they wanted to go off in search of grazing, but as cattle move quite readily uphill, they didn't take too much encouragement to keep moving up to the Middle Back gate.

As I rounded the last corner, I spotted about a dozen fair-sized wild pigs, swarming up the hill to the back fence. Bloody things. They've been rooting up the pasture all around the back of the farm. 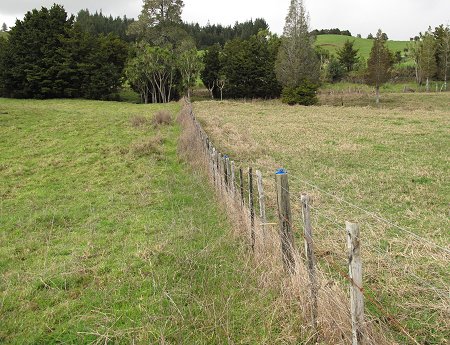 During the drought a local farmer cut and bailed spare pasture from a number of properties in the valley, including that of our neighbour, the pasture on the right in the photo. I thought it would be interesting to see how that close mowing would affect the pasture over the following months, compared with that on our side, where only cattle keep it under control.

There are some other rather important management differences as well, including our use of both fertilizer and lime, and the greatest difference between the two areas now seems to be the constitution of the sward: on the right there's only Kikuyu, while on our side there's a far greater range of species - including all manner of weeds - along with the Kikuyu.

The grey stalks on the right are the dried stolons of Kikuyu, which would have grown in the late autumn, but as the neighbour has only a few cattle which are allowed to range over the whole property, the resulting Kikuyu control is inadequate - in terms of getting the best value from the pasture.

On our side we continue to work on getting some little patches of blackberry under control, i.e. kill them, and there are a few sedge and rat-tail plants I've been hunting out for herbicidal attention as well. Some weeds are quite good feed during their early lives, and are actually at that point classed as herbs in pasture quality measurements, e.g. the Dropwort Parsley, generally known around here as carrot weed. As a young plant it is green, thick and nutritious; it is only as the flower stems grow and mature that it becomes unpalatable to the stock and causes management problems.

I spent much of the day working inside, but without a back door! It's funny how we get used to being able to close the holes in our houses. Stephan took the door to town to get the opening knob replaced, since it had become so worn it was really hard to open the door in a hurry. 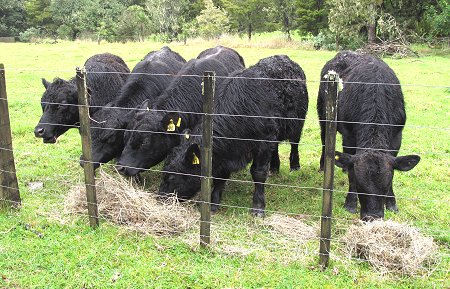 The two steers are to be collected in the morning, so not wanting to move them and the bulls from the Pig Paddock next to the yards, I opened one of the bags of hay we made from the back lawn in the summer. It's funny watching young animals working out that hay is for eating, but as soon as one figures it out, they're away.