The week beginning the 7th of August 2010.
Saturday the 7th

It rained all day. We've already had 85% of August's average monthly rainfall in just the first week. I calculated that over the year to date, we were only at 66% of the normal total to the end of July, so a wet August may be welcomed by many. The ground remains mostly firm, because the rest of winter has been drier than normal.

Another 28mm of rain overnight brings us to 163mm, which surpasses the long-term August average.

Stephan and I went up the road and ran some electric tapes along the boundary fence in the Road Flat and across an area where the cattle can access the river bed. As they're approaching later pregnancy, I'd rather the pregnant heifers were not heaving themselves up and down through the boggy approaches to the water. There's a perfectly good trough in the paddock!

Then Stephan climbed the hill over the road while I called from the bottom, until the thirteen heifers came thundering down the steep approach to the gate, which I opened so they could come straight out onto the road and across. I stood where I could both wave down traffic and direct the heifers into the gate across the road.

When cattle are on the road, people at both ends of the mob are required, but as we were going straight across, and the heifers knew where to go, I risked it. We time such movements as well as we can to avoid any traffic at all. 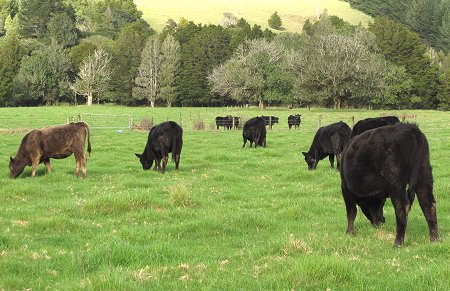 Later I moved the yearling heifers into Flat 5a with grass! This is extraordinary in August.
It's interesting how one can know something in theory, but not be prepared to act on it or believe it for real. I feel quite ashamed looking back through some of the photos in this website, seeing how awful some of the animals have sometimes looked. But I think my approach to feeding animals is not unusual amongst those who come to farming from elsewhere. Actually, bearing in mind that what we do is based on what we see others doing around our communities, it's pretty common amongst farmers in general: managed starvation, stock your land to the limit, push everything to the edge of its productive potential.

But over time I've come to see that as a stressful way to live, both for the animals and for us. I want my animals to be healthy and comfortable, not spending months of each year under-resourced so that every day is a struggle. I don't know if I've got it right yet, but things are certainly better than they were. The feed budget I did wasn't even a particularly onerous job, and I am not having to continually recalculate it during the season. I worked to the lowest feed growth period, calculated the feed each type of animal would need, how many I could feed and sold the rest. The winter has been better than I anticipated, so there's enough feed for all the animals and there will be less health problems as a result. Generally they're pretty robust, but if I can avoid problems with even the one or two cows at the bottom of the condition pile, life will be easier all round.

As the advisors at the field days over the last few months have repeatedly pointed out to us all, "grass grows grass", i.e. the healthier and more advanced in its growth a plant is, the faster it will grow. If you keep picking the leaves from small grass plants so they never grow enough leaf to gather sunshine, they'll eventually run out of energy.

Fewer animals means less pressure on the paddocks, so more time for the grass to grow, so more grass is actually available and the vicious circle of most winters is reversed. It won't be a problem to have the animals carrying a little fat, should that come to pass. 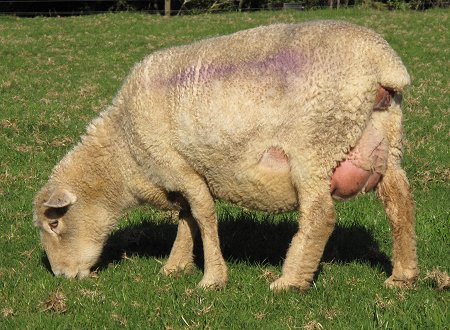 Young ewe, daughter of Dotty, continues to look pink and ready to lamb at any minute, but still she goes on.

I'm not sure if I explained the purple stripes: I put raddle on the ewes when we vaccinated them, so I can tell them apart from a distance. 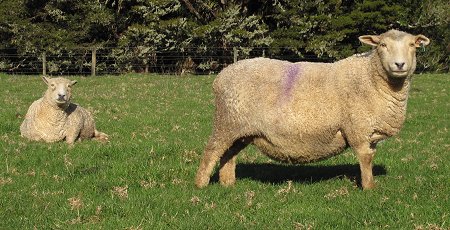 Standing, the elder daughter of Dotty, one of the triplets. She's the one which is regularly cast.

Sitting down is Yvette, still looking healthy enough and getting up and grazing a little more now. We bought some feed nuts for her, so I can sprinkle Magnesium Oxide over them and provide her with both a bit of extra sustenance, along with the Magnesium she's likely to be needing. She's still uncomfortable walking around, but seems a little better than the other day.

I keep a close eye on Yvette for any signs of depression, which would indicate sleepy sickness (pregnancy toxaemia).

Mike, Chantelle and their three boys came out to do some scientific experiments! One of the boys is doing a science fair project on some sort of firing mechanism and wanted to test various fuels and their effect on his projectile which had something to do with a potato. We directed them to the empty Camp paddock and I heard the occasional loud bang as I was moving the cattle around. 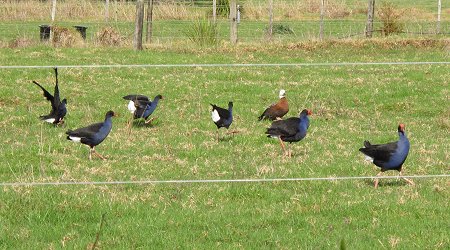 Iphigenie and I watched about 15 Pukeko this morning out in the House Paddock, having some sort of familial sorting-out session. Because one Pukeko looks like every other Pukeko, it's hard to know what's really going on. It's mating time and the birds are probably all part of an extended family. There was no serious fighting, just a lot of feather-flicking and chasing around. I have no idea what the duck thought she was doing in the midst of it all! 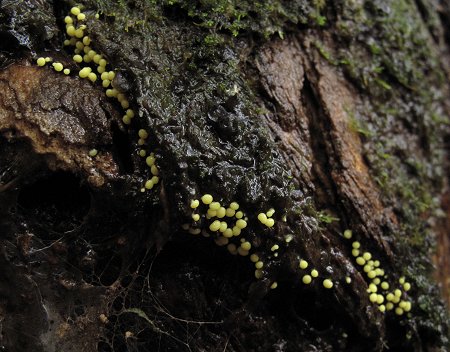 Iphigenie came out for a walk with me, and we wandered along some of the river banks, stood with some of the cows for a while during a rain shower, sharing our umbrella. These fungal spots were growing on a Puriri.

Iphigenie caught the 7.30am bus back to Auckland and later in the day, Jill came to take her place as our guest. 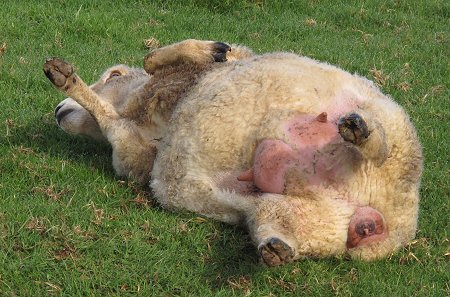 How undignified. Not once, but twice this morning, cast!

This is the youngest ewe, the one which has been looking so close to lambing with her pink udder growing so quickly. 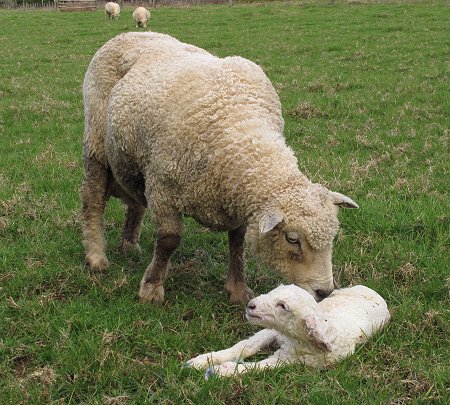 While watering the plants in my greenhouse, I heard a ewe calling, which is unusual. Jill and I set out for a walk, bit we halted at the top of the House paddock, because it turned out that Yvette was in labour.

After an hour I started to wonder if all was well. After another fifteen minutes I went to see what was happening and there were a couple of feet, but no obvious advancement of the lamb over the next few minutes, so I got Yvette to lie down (reached through to hold a leg on the other side and pushed her over) and felt to see what was happening inside her. The lamb's head seemed to have caught somehow on some part of her pelvic structure, but easily came loose, so I could then pull her out. I checked for another lamb inside, then left Yvette to clean her baby. 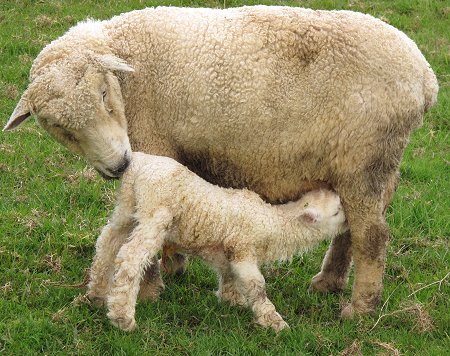 Jill and I went for a shorter walk than we'd planned, around the cows in the Camp Paddock. When we returned, Yvette's lamb had found the source of all goodness from now on, and was having her first drink. 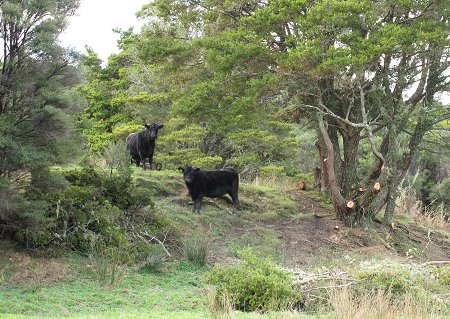 These were some of the cows we saw: 571 in the foreground, with Imagen standing behind.

Stephan was in here yesterday, pruning the big Totara at right, and dumping all the prunings into a huge Tomo which had opened in the ground. If a cow had missed her step and gone in head-first, she'd not have survived. If she'd slipped in backwards, she would have taken some serious extraction! The hole is under the pile of prunings in the left of the picture.

It's Jude's birthday tomorrow, so she suggested we could name the lamb after her, so she'll be Jewedy. 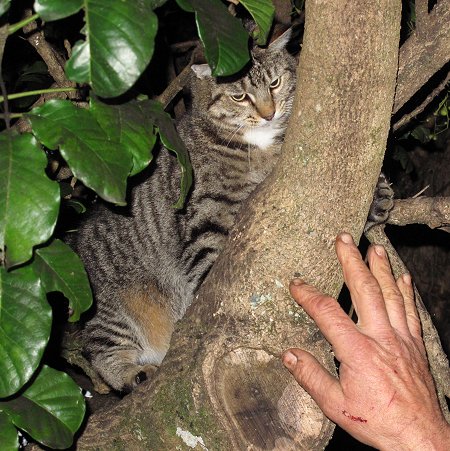 Mad, bad Finan, up in the Puriri outside the house this evening. 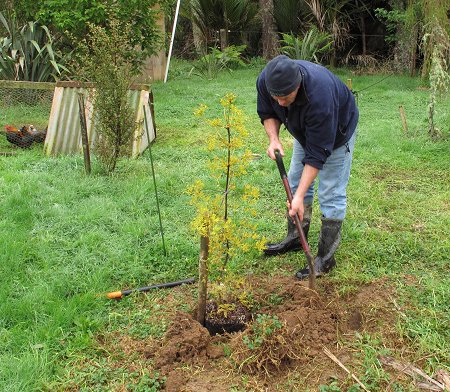 While Jill was preparing to leave this morning, Stephan and I planted a Tanekaha tree over the grave of Ingrette. I have long meant to plant the tree there, but was waiting for it to grow a bit, so it would survive whatever sort of climatic challenges might greet it. There are Tanekaha in our wider area, but none I've found around the farm. This one came from Pip's place, when they lived at Kaukapakapa. 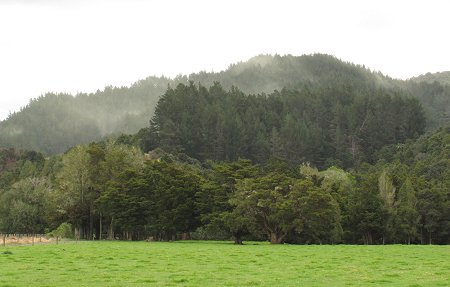 It looked like mist, but that didn't fit with high cloud and a warm morning, and then I realised that the great clouds were pine pollen, floating away on the light breeze. It had a faintly yellowy hue, which the picture doesn't show. Stephan says he's had conversations with two people who've said the pine pollen's appearance this year is early, but my previous observations of it have been 9 August in 2006 and 26 July last year.

It'll be sitting all over people's cars in the next few days and city-dwellers will be wondering what is falling on them. 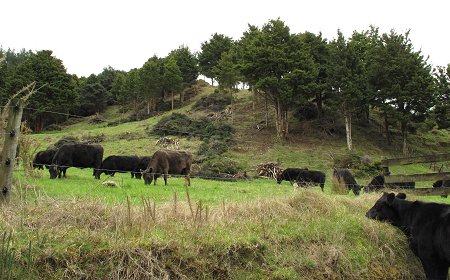 I moved the cows into the Pines Paddock again this morning and looked up to see a cleared hillside.

Once upon a time when I was 15 or 16, I obtained a driving licence. It was to last me a lifetime. But laws change and now my licence only lasts for ten years. Renewal for everyone is due around the middle birthday of each decade (25, 35, etc.). When the system started I was 34 and my first licence lasted only one year before I had to pay again for renewal.

Today we stood in a queue for about half an hour before I paid $43, did an sight test on a weird machine which made it extremely difficult to make out the letters I was to read out to the tester - I remember there being some fuss about these eye tests when the licence scheme was changed. Fortunately I managed to decipher the images, had my photo taken and my licence will be posted to me in due course. 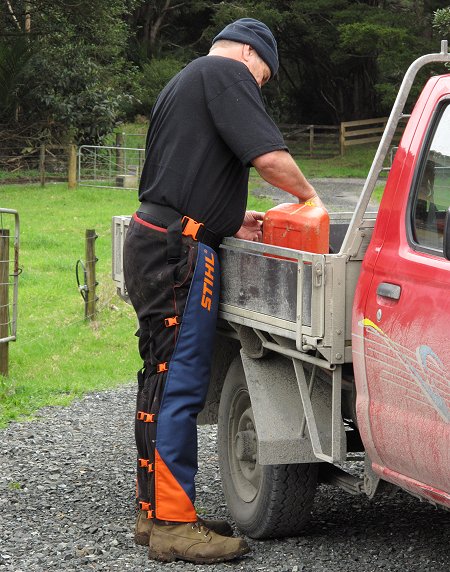 We also, in town, paid a visit to our friendly chainsaw shop and tried on the various safety protection for legs when working with a chainsaw. Because Stephan does a reasonable amount of this sort of work and because a couple of hundred dollars is a great deal less than the cost of a chainsaw injury should it occur, we bought the top of the range ones, as used by forestry workers.

The cheaper options were less robust, but also held on by material half-legs, as opposed to straps. We figured they'd be too hot to wear and there's nothing more pointless than safety gear you don't wear because it's not comfortable. 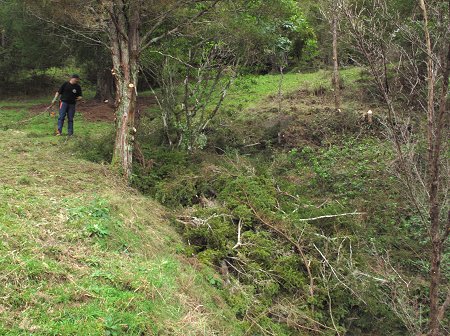 A few hours later, I went out to see what Stephan was doing and found him tidying up after doing some serious pruning and clearing around the hole in which Eva was trapped last year. It is now filled with the tree prunings which will both continue to allow the passage of water which creates the holes, but stop the cattle from going as close as they could before. Opening up the surrounding area also makes it possible for the cattle to avoid taking the narrow pathways through the holey areas.

Time will tell if this plan works. There are so many dangerous holes around the farm, along with so many big Totara with widely spreading low branches and it seemed a clever way to deal with both issues.

I went to see the pregnant heifers to check if they needed shifting yet or not, but they seemed quite content to remain where they are. The out-front ones on the left are Squiggles, Curly and 561, and the others are all the two-year-olds. Damara 74 is at the far right, the smallest of them all, Abigail's daughter.