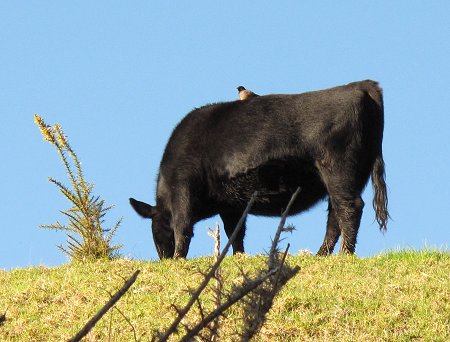 A bird's eye view? That looked like a very nice place to be sitting on a warm sunny morning.

I came up to check the pregnant heifers on the hill because there'd been a lot of barking around midnight last night from the neighbour's dog. I'd got out of bed and walked out to pinpoint its origin in the dark, but I also wanted to ensure all was well amongst the heifers this morning.

I currently have no working torch, which makes me a little nervous about things happening at night. I must sort that out! Fortunately last night there was quite a lot of moonlight. 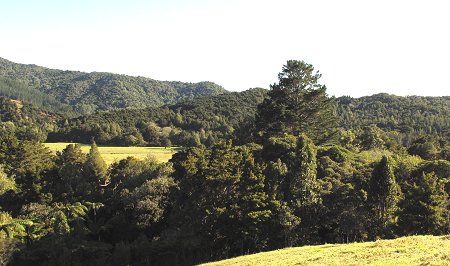 The big Pine tree, from the hill over the road. 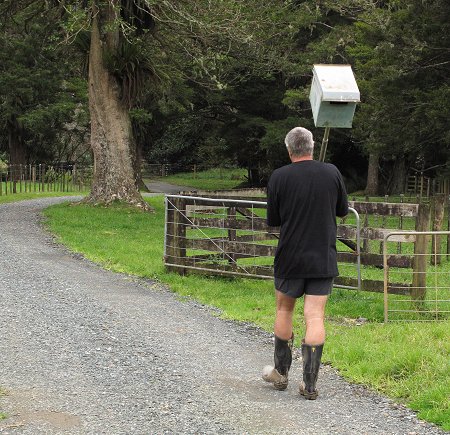 The mail, I said, get the mail!

When I first arrived at the farm, our rural delivery person was the marvellous Brian Shepherd, who had been delivering down this valley when I was still at school and living down the road. He took pride in doing his job well and was a lovely man to deal with.

But these days mail often goes astray, including valuable parcels having been left in unsuitable places, costs of replacement or repair generally being met by the eventual recipients. We get other people's mail, they get ours ... All most unsatisfactory.

Today we found all the mail, including the weekly Listener magazine, shoved without care into the bird-nesting mailbox which we used to use until the birds took over. For some reason the Saturday relief driver has decided mail should go in there in preference to the perfectly ordinary mailbox standing next to it, kindly shared with us by Jane.
We decided to remove the temptation to do that again.

Monday the 2nd of August 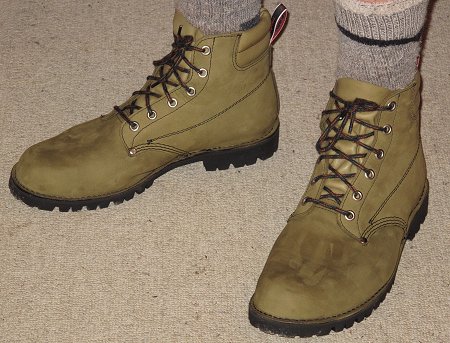 A month ago when we last went to Whangarei, Stephan went to [a vendor we will no longer use due to subsequent unsatisfactory service] and had his feet measured for a pair of boots suitable for his bush walking jobs. Today they arrived and they look really good. 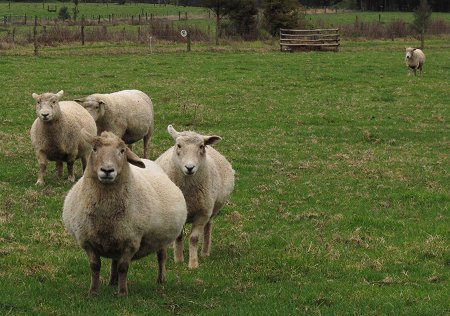 Look at Dotty's left ear! The ewes were on their way across the House paddock in response to my call, because today is the day they may receive their booster shot of 5in1 vaccine, hopefully in good time before the lambs are born.

Dotty appears generally in good health, but the dirt on her face suggests she's been rubbing her head to relieve some annoyance.

Poor old Yvette is away off in the rear, hobbling along. We had another look at her feet, did a bit more trimming, sprayed them with iodine again. Then they went into the Chickens paddock, where there's some grass and shelter, for a few days of easy eating, and to make sure there'll be enough feed in the House Paddock for the whole of the lambing period. 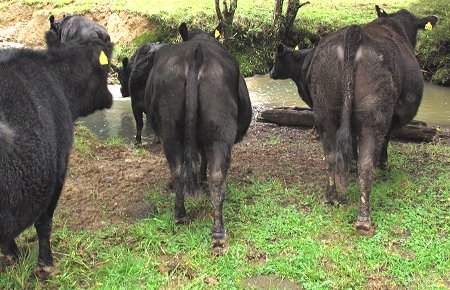 I'm really enjoying the cows being in such good condition this winter. By August in most years things are getting stretched feed-wise and I start feeling stressed. When the weather is cold they need more feed to keep warm, and they're also approaching the end of their pregnancies, so the demands on their bodies are increasing and in previous years I've run them too hard. Now that I've got to grips with feed budgeting, and the winter has been unusually mild and dry, the animals and I are under far less pressure. 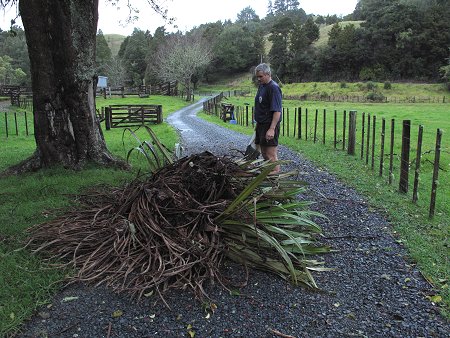 We went out to get the mail this evening and found an obstruction on the driveway. We first checked for gumboots sticking out from underneath! These epiphytes are huge and heavy and for good reason called Widowmakers by old bush men. The other half of the plant is still up there ...

I will walk at the outside edge of the driveway for the foreseeable future! 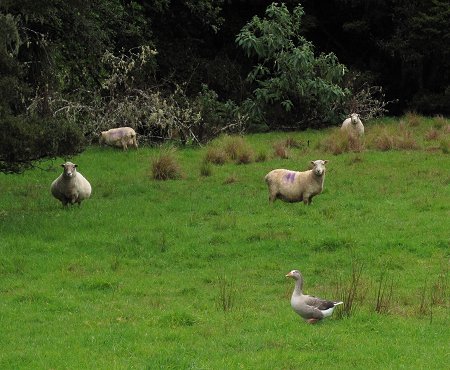 Ms Goose was happy for a little while, being amongst sheep again. While she likes the sheep being around, she won't follow them out into the other paddocks. She'd make a good sentry, I think.

Far too much rain fell today, and the river was up and over the bridge. I eventually moved the ewes back to the House Paddock again, away from the possibility of being carried away by the river. 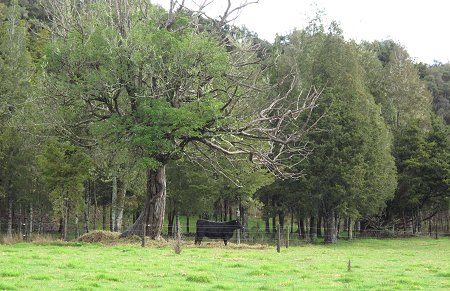 Bad cattle - or more accurately, bad fencing - leading to a very cross farmer. Somebody unknown had left the electric fence switch, which controls the back of the farm, OFF. Unknown because I know it wasn't me, and Stephan says it wasn't him. Has somebody else been turning off our fences?

The two heifers which were in two separate fenced areas couldn't be convinced to go back through the wires they'd come in through, so I had to go and find the appropriate tool to untension the fence wires and let them out. When I'd finished getting them out, another heifer had got into the fencing around the tree in the paddock to which I'd just opened the gate! I did quite a lot of shouting and being angry and when Stephan arrived home I shouted at him too. I'm so sure that helped. 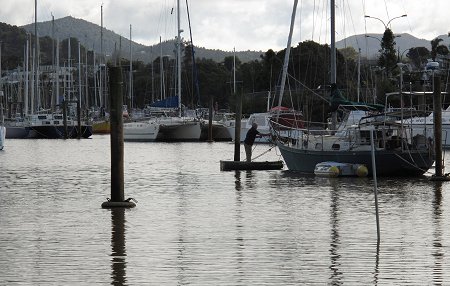 We went to Whangarei to do a bit of business and at one point were near the town basin, so wandered out for a look at the view.

Home again this morning, after waiting for the bus from Auckland to deliver Iphigenie to us, so she could come up for a few days' rest and relaxation. It's not very comfortable travelling three people in the front of the ute, but we stopped a couple of times and Iphigenie and I swapped positions - Stephan has to drive because if I do, the seat has to be moved forward and then there isn't enough space for three. We need a rich benefactor! 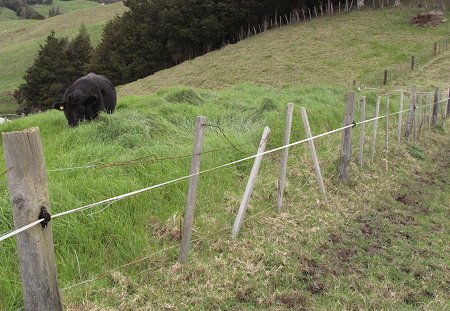 Leaving Iphigenie comfortably installed on the couch with a book, I went up the hill to check on the heifers and discovered young Ivy (Squiggles) on the other side of the old fence in our "new" land. I've not started using the grass for my cattle yet, because I don't particularly need it, and would prefer to put off grazing it for as long as possible, since it has been grazed by other herds for so long.

I undid the electric tape and coaxed Squiggles back out into the paddock with her mates. I was going to move the mob, but they were in separate groups at either end of the paddock, so I'll wait until they're all together somewhere nearer the other end to go across the road into the little Road Paddock.