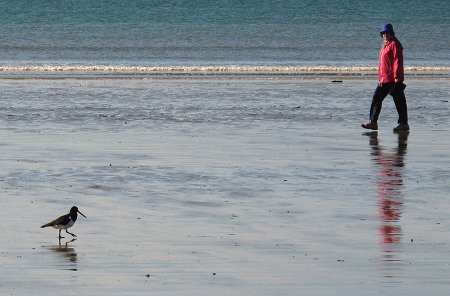 Orewa Beach on Saturday. The weather forecasts were for a horrible day, but it was lovely: sunny, not too cold, and calm! 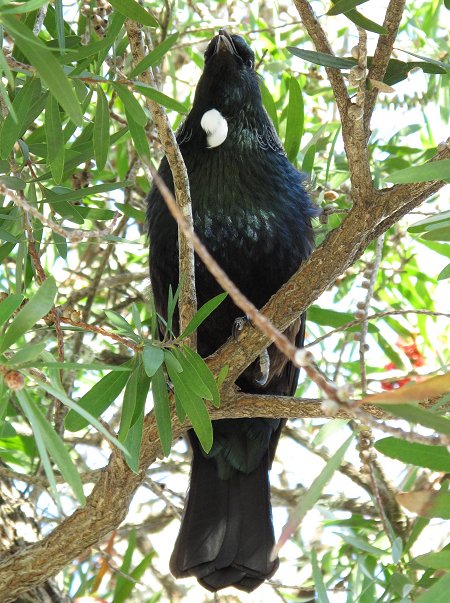 On our walk back to Pip and Tony's place, there were Tui singing in the not-very-tall Bottlebrush trees, under which I stood and watched this bird at close range.

It was much more accustomed to the proximity of people than the birds at home. 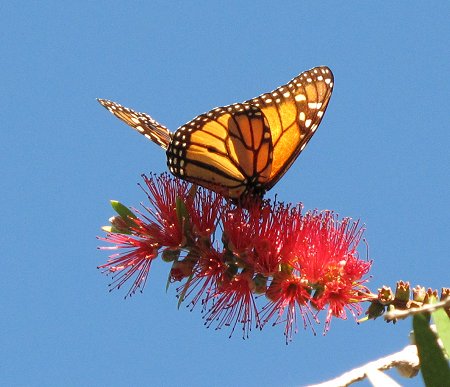 Monarch Butterflies fluttered around one of the parks we walked through, and in the neighbouring streets.

We watched a young cat stalking a butterfly along a hedge near a school. It was as if the butterfly was teasing the cat, staying just out of reach, then flitting away just as the cat prepared to leap.

This butterfly is male: there's a pheromone pouch on his lower wing, which makes a thickened lump along one of the dark lines. 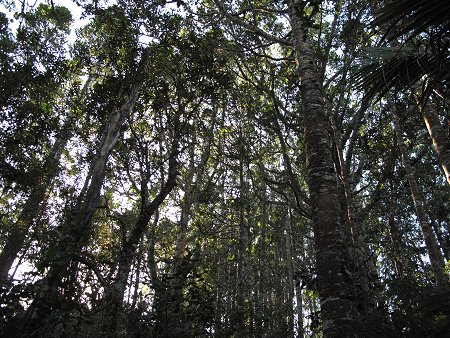 After lunch we went for a walk in the nearby Alice Eaves Reserve, a Kauri forest remnant which was given to the local community over 50 years ago. The local Lions Club built and maintain the boardwalks and gravel tracks through the forest. 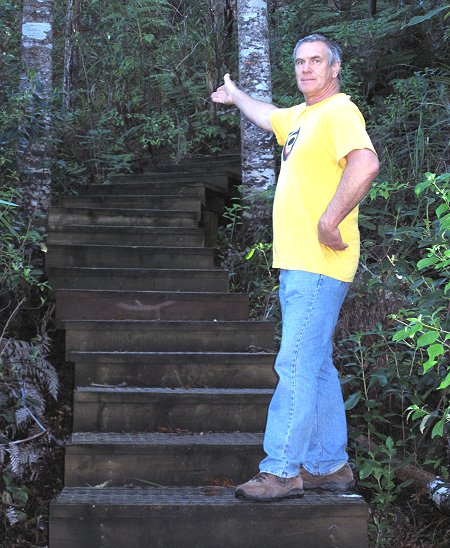 Stephan said he'd like the Whakaangi Landcare Trust to take note of the standard of the walk here, to make his trapping job easier there. Yeah, right. 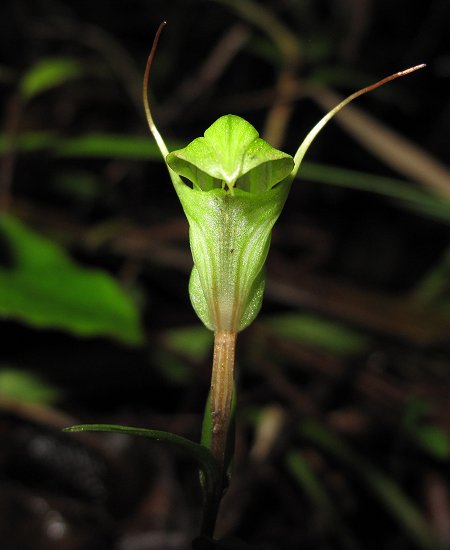 And there was I, walking along minding my own business, bent down to look at a tiny seedling I'd not seen before and an orchid jumped out of the undergrowth!

From then on I could see them everywhere.

Kevin Matthews, my local orchid consultant, tells me they're Diplodium alobulum, although I thought they were Diplodium trullifolium as I searched the Native Orchids website's listings. 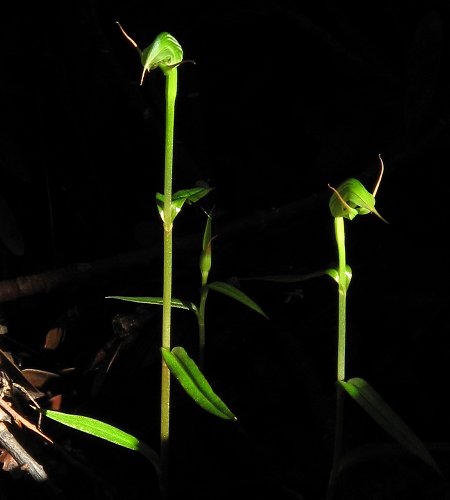 These are Pterostylis agathicola. Agathicola is a reference to their growing in forests of Agathis australis, the Kauri tree. 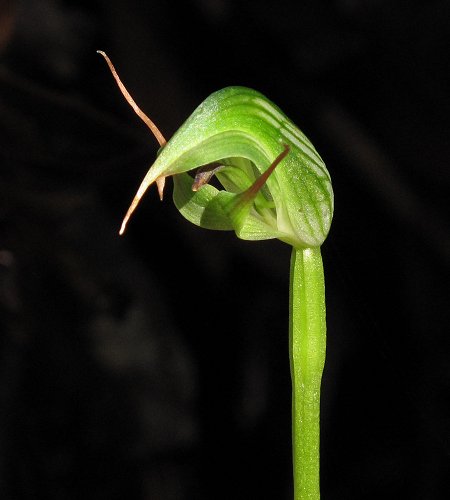 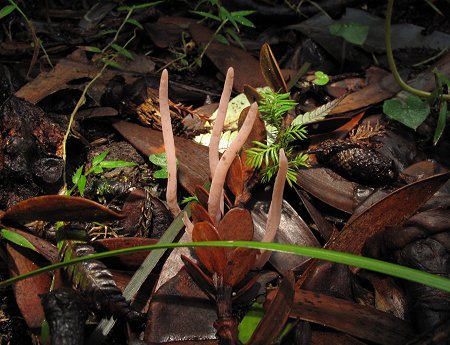 The light faded quickly yesterday afternoon in the reserve, so Pip offered to go again with me this morning, for more orchid hunting and photography. She was an excellent photographer's assistant, carrying a small cushion in a plastic bag for me to kneel upon, a cooking dish with a highly reflective surface for directing light into dim places, and a ready hand to help me up from cramped positions.

Pip spotted this fungus, looking like some poor soul's fingers reaching out of the earth. 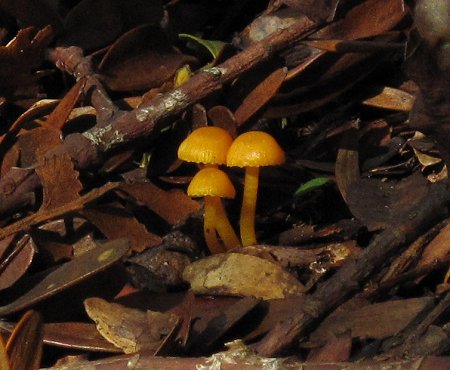 It's a lovely time of year to look closely at the forest floor, with all manner of colourful fungi growing. 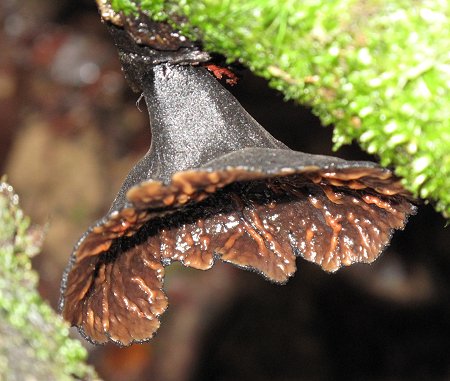 So many varieties, positions and sizes.

Fungi are not my particular interest at present, although I enjoy finding and photographing them. If you can help me identify them, please feel free to email me. 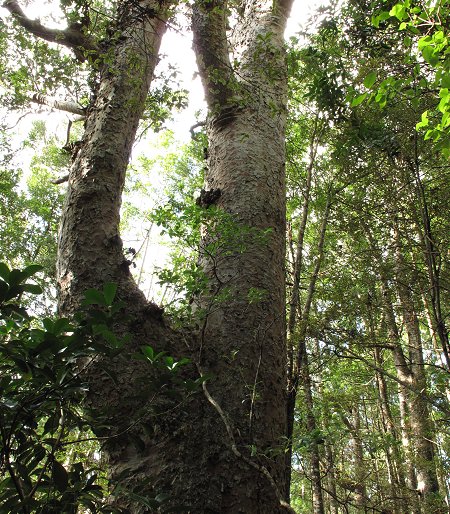 The bulk of some of the trees is staggering. This is the trunk of one of the largest Kauri along the boardwalk.

We had a wonderfully restful time with Pip and Tony. I realised how relaxed I was when we were going for our second forest walk: I'd not thought about the farm for over 24 hours. Short breaks are great for that sort of "relaxation by disconnection" in that we're only away for as long as I might ordinarily not go out to check the stock in the back paddocks, so I don't worry about what might be happening at home.

While Pip and I were wandering in the forest, Stephan and Tony were lounging in a heated swimming pool in the apartments' gym complex! We'd both quite like to come to this resort again!

After lunch we set off for home, just under a four-hour drive from Orewa, with a short break at Jill's place on the way.

My first duty after a couple of days away is to check everybody on the farm is still standing upright! Jane reported that our rotund ewe had been over on her back one evening, but was easily righted.

I met with vet Nathan at the clinic in town this morning to go through our animal health plan. It was an opportunity to check that my intentions match my areas of greatest animal health need and risk. For instance, we're still not vaccinating for BVD because we don't bring other cattle in to our herd from elsewhere and I think we manage cattle on the boundaries well enough to reduce the risk to a negligible level. Nathan's not reassuring on that point. However, he's working only on his understanding of my description of the situation. I read conflicting advice on BVD's ease of transmission, some sources suggesting a mere sneeze or single nose-touch with an infected animal would be enough, others suggesting that a longer period of exposure to an infectious animal is necessary.

The other area of interest was Leptospirosis control and the worth of testing for infection when cows abort, even though we vaccinate the herd. Vaccination rarely covers a whole population (there will always be some individuals whose immune systems do not respond adequately) so it is possible that we'll have the odd cow infected and I'd certainly want to know about that where it may be the case.

After I'd finished meeting with Nathan, I went straight into a Board meeting which, ridiculously, lasted most of the day! Sometimes a voluntary position can become very onerous.

It now being Monday in the USA, the day's big news in the Angus world is the release of a test for the genetic defect which was called Fawn Calf Syndrome (FCS) and which has now been more scientifically appropriately named Contractural Arachnodactyly (CA). It's been a long time coming! There were difficulties in determining the actual genetic mutation which caused the problem so that a definitive test could be developed. We were all spoilt by the astonishing speed of the development of the previous two defect tests, for Arthrogryposis Multiplex (AM) and Neuropathic Hydrocephalus (NH), which were developed within a few weeks of the public discovery of the problems and the tests were very soon commercially available. The first useful news which comes out with this announcement is a list of results for sires in common use from the semen companies in the US so that I can know, for example, that our #43 bull, sire of many of my lovely R2 heifers (he tested AMF and NHF, free of both defects) is also free of CA, because his grandsire (his only relative with any risk) has tested Free. I'm also very pleased to note that Ardrossan Connection X15, Eva's and bull #60's sire, is not a carrier of CA. So far so good. When some of the Australian sires are tested, I will know a little more about how many animals in my herd I don't (or do) need to test.

I noticed that Yvette ewe was spending a lot of time sitting at the end of the Flat 1 paddock, not doing a lot of eating. In late pregnancy, that's not a safe thing: as the demands on her metabolism grow, she needs to maintain her intake.
Another worrying problem was the ram's increasing aggression toward the rest of the sheep, including the now heavily pregnant ewes. The answer to both issues was to move them from the big Flat 1 paddock so we can draft the ram and wether out of the mob. 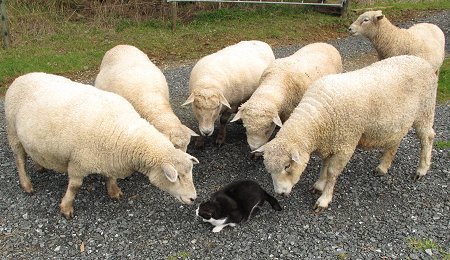 I called them out of the paddock, and with a bit of studious ram-avoidance, moved them down to the driveway area. Foxton walked out under the gate and down into the midst of the sheep. 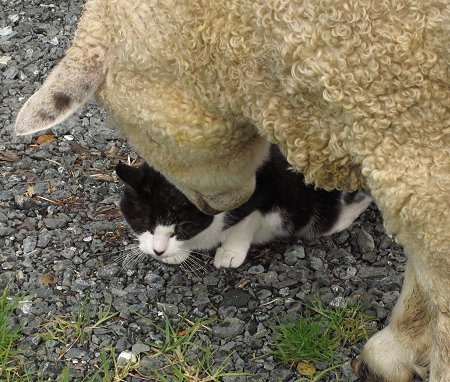 She seemed entirely relaxed, arching her body toward them as they all gathered to sniff her. Then she rubbed her head and face against their noses as they continued to investigate her.

She's become very smoochy lately, with anyone who'll pay her any physical attention! 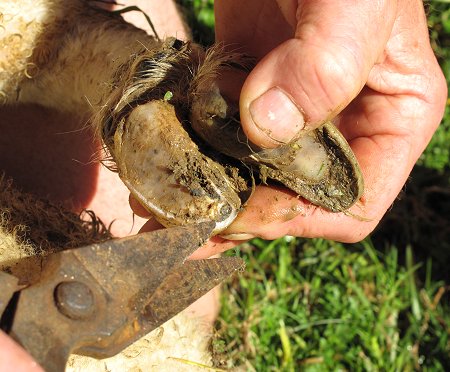 Yvette is quite lame, making her reluctant to walk around and feed. We've carefully trimmed her feet a couple of times in the last couple of months, trying to decrease her discomfort. There is nothing major wrong with her feet, no footrot disease, no foreign matter lodged anywhere, perhaps a little scald between her toes, which we sprayed with iodine.

I have observed such front-foot soreness before in late-pregnancy ewes and cows, especially older ones. I've tried supplementing Magnesium before and have noticed some improvement, although I can't say that is a definite relationship.

We put the five ewes into the House paddock, so I can keep a close eye on them. 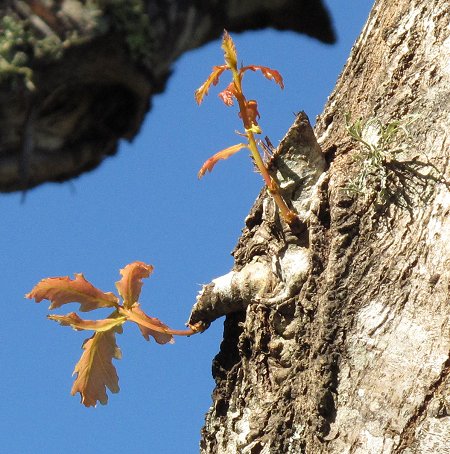 It must be spring! The Oak tree out at the front has new leaves sprouting everywhere. Very pretty. 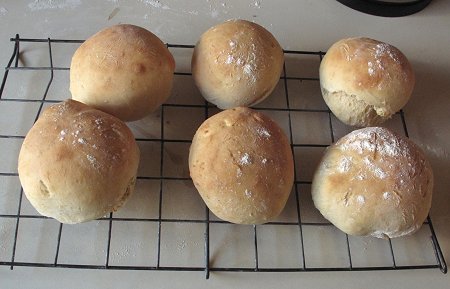 Stephan made baps this morning, a type of bread roll he found in the Cordon Bleu cookbooks. They were to go with the French Onion and the Kumara soups he had also whipped up for lunch.

Nephew Jonathan and Char-Lien were our lunch guests. 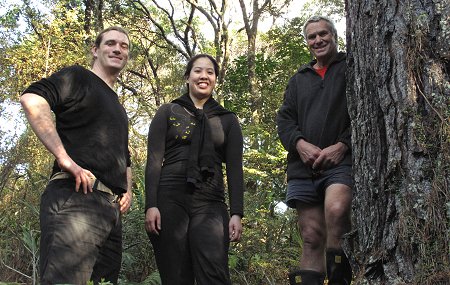 After lunch we walked up the hill over the road, called Thistle Hill by Jonathan and his siblings. The pregnant heifers were all helpfully visible for a quick check, after which we descended to the road again.

We went into the bush from the road and found the base of the huge Pine tree, then wandered around, looking at the trees. Jonathan particularly wanted to see the big Northern Rata. 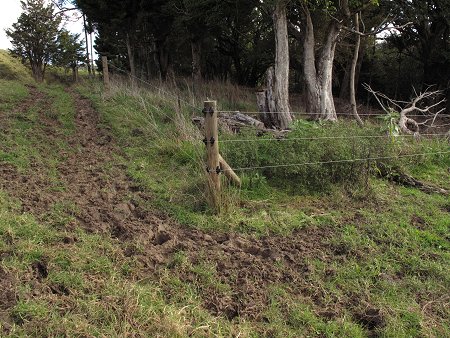 This is something I wanted to photograph "for the record". When we fenced off the wetland area in the Swamp Paddock last year, the Northland Regional Council consultant commented that we'd fenced a bit close to the waterway, considering it is cattle we're excluding from the area. He said that this is the sort of mess cattle make near fences and that we'd therefore have a lot of soil runoff into the wetland.

But I theorise (and I'll have to go out and check) that it depends which way the fences bend. Here the cattle make a lot of mess around a high-traffic externally-angled corner. But inside a corner, they'll take different tracks, and will tend to be in the area to graze, rather than transiting through it. 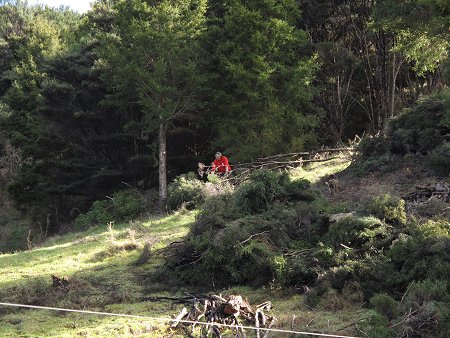 Stephan's been continuing his assault on the Pines Paddock. He covers a lot of ground in what seems like a very short time.