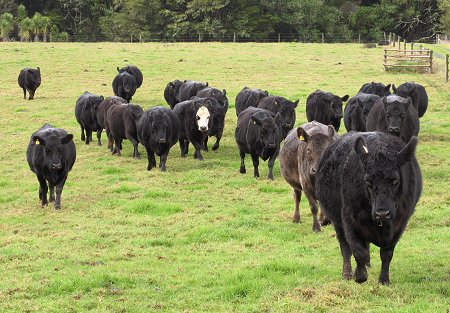 Jill went home. I moved the cows. Life on the farm continued ...

One of Stephan's remaining NZ Kiwi Foundation funded trapping walks is through a particularly nice little patch of bush about twenty minutes drive from home. It is where he saw his first Kiwi last October. This morning was fine and sunny, so I decided to go with him as he checked and reset the traps. 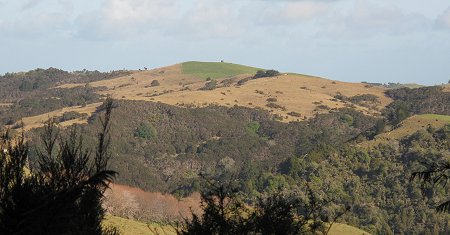 We drove along the little road from which the bush block is accessed, and I gradually saw more and more of this severely over-grazed farm. There were some animals still visible on those grassless paddocks. I don't know whose property, nor even on which road it is, but it's a bad look when such a large area is affected. You might expect single paddocks to look like that as you hard-graze Kikuyu in the winter, but not what appears to be a whole farm. 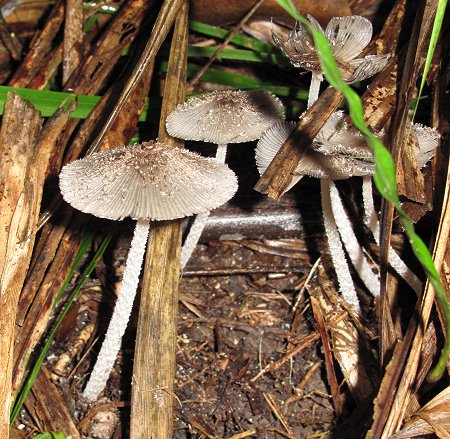 We parked the ute and walked along the road for a while to the far end of the bush block and descended into the forest.

There were a lot of mature Tanekaha trees (also called Celery Pine), Phyllocladus trichomanoides. We don't have any on the farm, although I assume they would once have grown there. Bearing in mind how many new plants I find every year, it is quite possible there are some somewhere and I can't see the trees for the forest.

This is the time of year for finding many beautiful fungi. 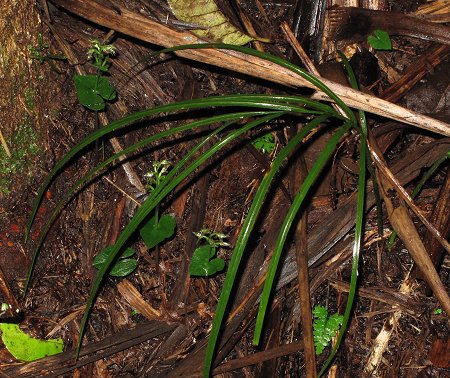 A bit more searching around found lots more of them, many with tiny flowers: orchids! 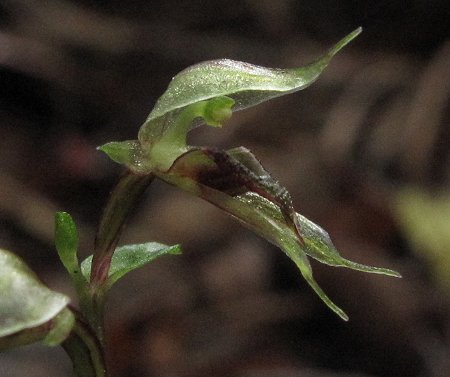 They are Acianthus sinclairii. It wasn't until I brought the camera home and put the photos on the screen that I could get a really good look at them. 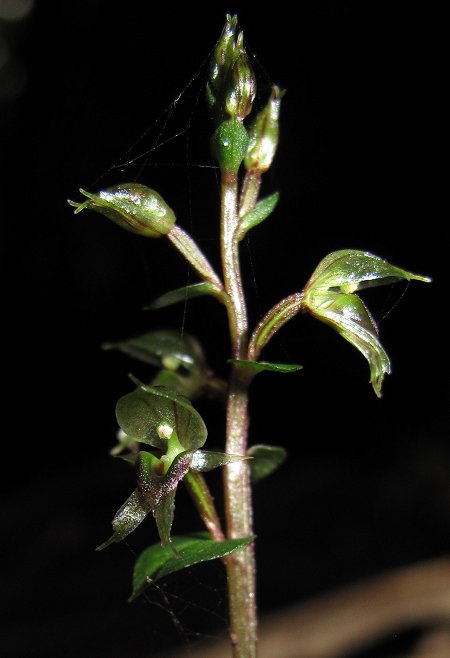 If you're accustomed to the flashy great things people grow in their glasshouses, perhaps these don't look very exciting. I find them fascinating, partly because they are so tiny and they're out there, growing all over the place. 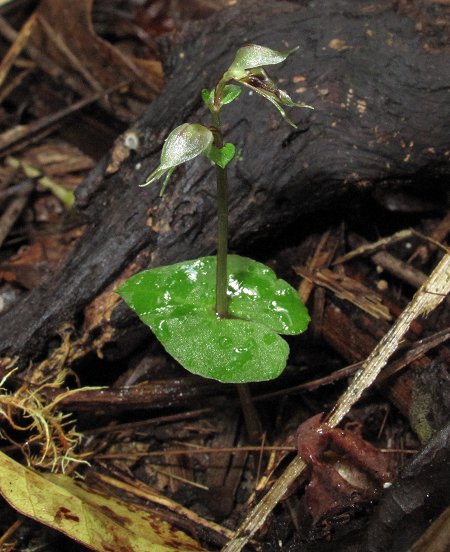 Once I'd seen and identified the plants, I kept seeing more of them. 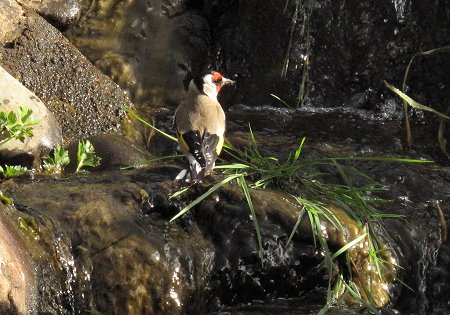 The little Goldfinches in our garden are surprisingly sociable when I'm walking about; sadly that makes them very easy prey for Finan the cat. I'm beginning to think we might have to cage him during the day, to stop his constant bird-stalking. 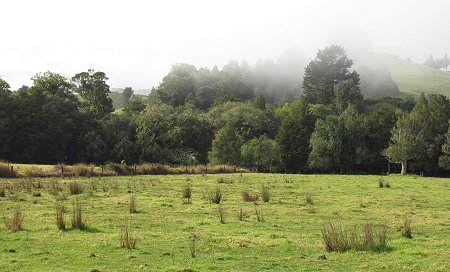 We have been thinking about having that huge Pine tree removed. It is a tree of significance in some ways, having stood there for all the time Stephan's family have owned the farm, and for many years before. But it is growing in the middle of a patch of native bush and I can't think of any reason for it having been specifically planted right there.

I will try and find an older person to ask.

The paddock in the foreground is Flat 2. It used to look like this, covered in rushes. 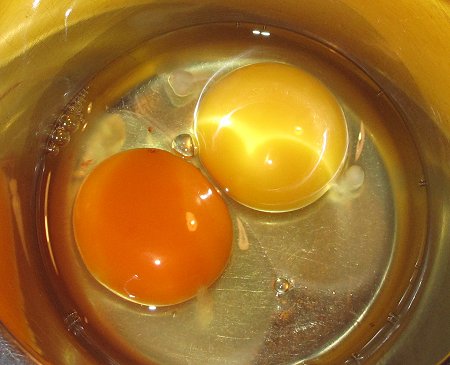 It rained all day today. I stayed inside writing and Stephan spent the day out getting wet, trapping.

He brought home a few eggs from some hens he's been feeding for someone, which live in a large run but appear to have less access to grass than our hens do with their daily cage movements. One of our hen's eggs is on the left, and the other is one Stephan brought home. 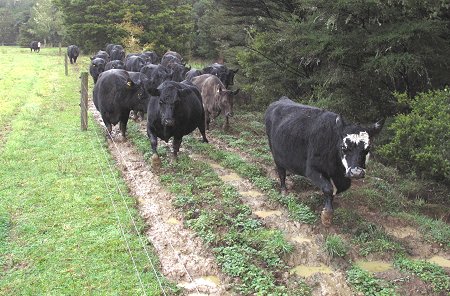 This morning I shot out the door to carry out some efficiently planned cattle movements to ensure the animals are all safe and fed for the next three days while we are away from home. I managed to get everything done in a very short time, mostly due to all of the cows coming as soon as I called them out of the tricky Small Hill paddock. The other mobs to be moved were in flat paddocks where I simply had to let them through gates.

We drove through Fairburn (where the river was still quite high, and there was lots of water still flooding paddocks) and Peria to the East Coast road through Mangonui, heading for Takou Bay Road and a Beef + Lamb Post-mortem workshop.

As soon as I received notification of this event I noted it on the calendar as something not to be missed! Opening up a dead animal to see if it is possible to identify a cause of death, can provide some very useful information. In the case of dead lambs or calves, being able to tell if they were alive or not at birth can be important in determining various problems which might be addressed in the whole flock or herd. 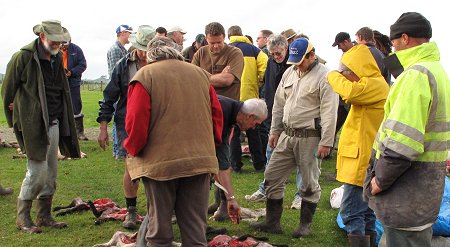 The host farmer had provided the bodies of a number of slaughtered poor-doing sheep and farmers who have already begun lambing had supplied dead lambs, and we were shown how to efficiently open them up to see what had caused their illness or death.

I chose and cropped my photo quite carefully: the scene looked like something from a horror movie when we'd all finished!

We left the field day at around 3.30pm and drove on to Whangarei for a meal with Jill, hoping she'd not serve us lamb.

After dinner, we went on to Auckland, arriving at 9pm at Jude's place where Rachel was house-sitting and Issa was waiting to see us. We slept in a couple of small boys' beds. I wondered if they'd notice anything when they come home? We didn't eat any porridge.

Fairfax Magazines held an information day for their contributors (writers and photographers) today, which I and about 90 others attended in Auckland. Many of the editors of the numerous Fairfax publications were there as well. It was an opportunity to meet up with some of the other people whose names and faces appear in Lifestyle Block Magazine. Fairfax management spent much of the morning telling us about the business side of their enterprise and how they measure how well they're doing and why magazines are so enjoyed. But there were also some very interesting presentations from editors who'd been writers first and in the afternoon a split session during which half of us listened to writer Karl du Fresne, and the others to a presentation on photography. We were promised notes from whichever session we didn't attend.

My friend and Lifestyle Block editor, Nadene, took me back to Jude's house where we collected Stephan and went together out to an early dinner, at Tabou, which I'd so much enjoyed last year with my sister Rachel. The three of us had excellent meals and then Nadene dropped us home. We took our leave of Rachel and two visiting friends, and drove north to Orewa to stay with Pip, Tony and Alex. When we're on holiday, we fit it all in!