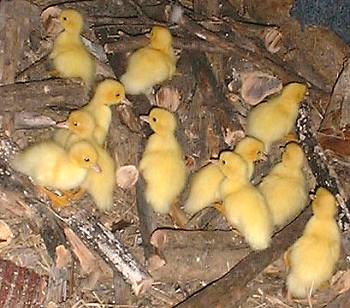 Yes, of course we need ELEVEN more Muscovy ducklings.  The mother of this lot was nesting in a secret place near where the hen was incubating the ducklings I really meant to hatch, but I had not realised the larger nest was there.  By the time we discovered it the other day and I went to replace the Muscovy eggs with the other sort, I could see that the ducklings within the eggs were on the point of hatching and couldn't bring myself to stop them.

They've taken about three more days since then to hatch and I wondered if they would actually appear, but here they are, this morning, in all their insufferable cuteness, climbing over the firewood to follow their mother out of the shed.

I went to count the 25 sheep in the Camp Paddock over the river this afternoon and found only 24!  #26 who is one of my quiet older bottle-fed ewes was on her side with her head wool all tied up in blackberry and rushes.  She must have been grazing the longer grass amongst the blackberry bushes and got caught up, then went around and around in her attempts to get away and just made it all much worse, until she couldn't move at all.  As soon as she was released, she started eating, so she'll be fine.

I swore to myself I wouldn't, but here I am this morning, hunting for the eleventh duckling which has strayed away from the others.  I found it, sitting on a log in the river, but by the time I got there with the camera, it had fallen off the log and back into the river.  Silly Muscovy duck then took them all upstream where half of them managed to get out and onto the bank and the rest swam around in circles....

By the end of the day, despite my best efforts, there are only ten.  I'm going to try not to count them every time I see them, they'll just have to look after themselves.  The duck is one of the three daughters of the original pair. 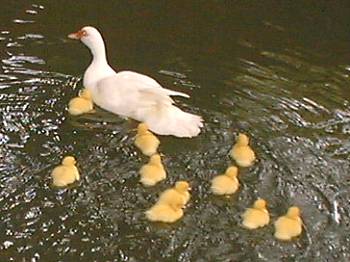 I have noticed in the last few months that some radio and television presenters have at last been doing more to discover and then use the correct pronunciation of place and other names and words in news reports.  Many still sound appalling, but there is some movement.  It's not that hard, just takes a bit of effort from those of us for whom English is our first language, since some of the vowel and consonant sounds are quite different from English.  Practise makes the difference!  I've spent lots of time on long drives, repeating the names on road signs until they will easily roll off my tongue, especially if the vowel combinations are unfamiliar.  I used the same process when learning play lines, actually, since some phrase combinations were not ones I'd naturally use and that was in English!  I presume children learn to speak in the same way - practising the actual oral gymnastics which produce words clearly (or not, as is the case with some!).

There are no yellow ducklings left.

I've spent quite a bit of time wandering around checking and moving stock, checking the sheep to make sure they're all still on their feet. 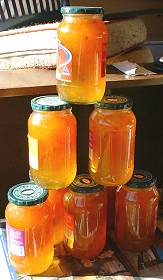 Stephan made Marmalade again, this time from a recipe Grant provided.  It involved about three days of soaking the fruit, boiling it up for a little while and then eventually adding the sugar and then bottling it all.  It looks beautifully clear and delicious!

We have a few bales of hay, thanks to Lynn and Kees, so have been feeding them to the "skinny heifer" mob which includes Abigail and Arran 20 the young bull. 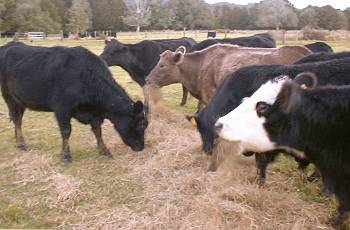 The last couple of days have been reasonably fine and warm and there's a definite green tinge on the paddocks, so the grass is moving, despite the cold early mornings. 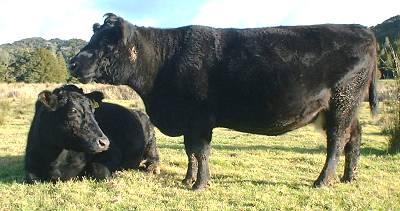 I went to have a close look at 356 because I noticed that he was actually sitting on his injured leg, the first time I've seen him do that in six months, although I suspect he's been doing so for a couple of weeks, from the grass which has been stuck to the healing wound lately.

Ivy is the fattest cow on the farm at the moment, since she's been on the very best feed and I suspect she can actually eat more efficiently now she has no front teeth than when she had a few wobbly ones and a lot of gaps. 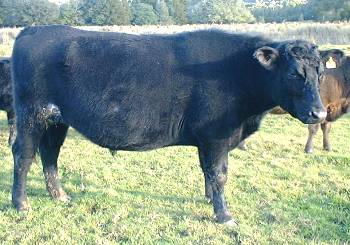 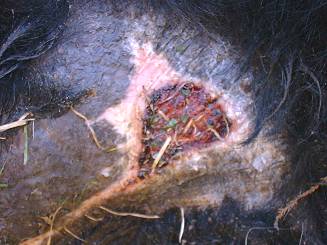 356 has gained so much condition over the last few weeks, very noticeably over his back where he's nowhere near as bony as he previously was.  The picture of the wound area isn't terribly clear - I'll try again in a few days - but shows how small the remaining uncovered area is.  When it first opened up, I could put most of my hand under the skin and up around some of the muscle within, so to have brought him this far is a marvellous thing.  I have photographed the wound throughout the process - some of the pictures are most unpleasant but for those who are interested, are available here.  I didn't want to display them earlier, since it all looked so dreadful and I wasn't convinced that the outcome would be so satisfactory.

He needs now to finish covering the area, but I doubt that it will regrow any hair.  The other places where he was hurt have grown white hair around their edges and the centres have remained bald.  Despite these long months of care and close association, his eventual fate will be the same.  I do not intend to keep him forever, growing old and fat and eating grass which could feed a breeding cow. 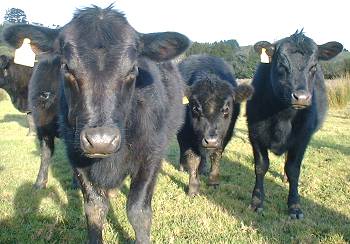 I then spent some time with the young heifers and 356, just stroking a couple who will let me and talking to them all.  The front one in this picture, 452, is the most flighty of the group, but obviously she was feeling more curious and relaxed this afternoon.

The cows, having come off the hill in the background of this picture, spent a couple of days tidying up our wettest flats paddock (the wetness is why there are so many rushes growing) and then I moved them back out to the paddocks they were in a week ago.  That's a pretty fast return to the same area, but at this time of the year, there's not a lot of choice. 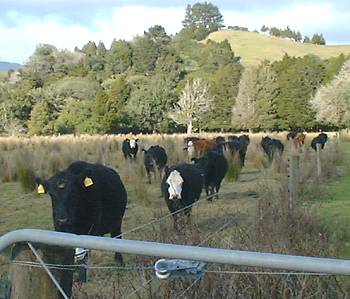 The 36 cows are alternating between the nine hectares over the road and four paddocks totalling 27 hectares on the rest of the farm.  There's not much feed, but what they are eating is the freshly growing grass, so they're holding condition well enough.  The mob of 21 young cattle is on 17 hectares in three paddocks.  In past years I've continued to rotationally graze them, but there's been little time for much growth to occur in the paddocks they've left before they have to return to them again.  This way they have continual access to the whole area and I'm feeling a bit less stressed about how to feed them!  The balance is a bit different this year too, with a lot more pregnant cows and far fewer young stock to feed, even though I now have the "skinny heifer" mob and the weaners grazing separately.