The five ducklings are growing so fast!  I've had to be pretty careful, when getting them their food, not to accidentally walk on them when they're running all over the place under my feet.  This is their usual habit after breakfast ... 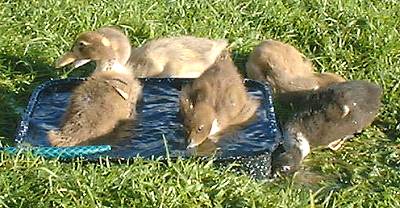 ... a drink and a bath, all at the same time.  They still follow their mother hen around, although she's not so devoted to them as she was in the first couple of weeks.

I brought the heifers in to the yards to weigh them, since they'll need a drench when I can be sure there won't be any rain around and just as I brought this lot in, the previously clear warm sky clouded over to a cold and wet grey!

I'll be interested to see this year, whether keeping these heifers separate and better fed than I'm usually able to arrange, makes a big difference to their year's growth rates.  So far their growth trends look little different from the heifers in other years, although without the good feed they may have been below the others, because our whole season since last spring was so poor, hence the continuing lightness of their mothers.  The yearling animals generally lose weight between now and the end of September, but I'm hoping that won't happen to this lot and that they will therefore have a head start on growth during the spring and summer months.  Of course so much depends on whether the weather promotes the sort of growth we need, or continues throwing oddly dry or cold conditions at us in months when it is usually damp and warm.

Monday the 2nd of August

We've intended shearing the ewes for several weeks, but needed to have a few fine days in a row when nothing else suddenly happened to put the job off!  Because most of them are about four months through their five-month pregnancy, the job required some care, so as not to stress them too much, nor cause them too much physical discomfort during the shearing.  A couple of them have sore feet which needed to be checked and trimmed to help deal with whatever bug had taken up residence under the hoof.  Ewes with sore feet tend to sit down a lot and thus don't eat as much as they need to, which can lead to all sorts of metabolic problems, so at this time of the year, such problems need to be dealt with if they don't resolve themselves quickly. 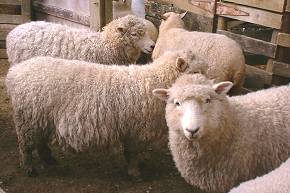 The ewes, waiting in the yards before going up into the covered pen behind the shearing board.

That's Lambie looking at the camera. 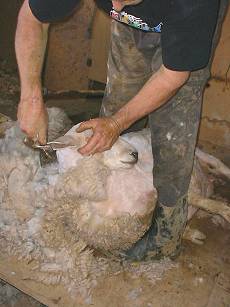 After getting all that wool off, all the ewes found a gate or piece of fence to scratch against! 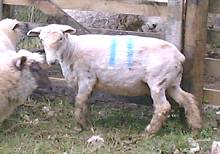 Before Stephan shore each ewe I injected each of them with the annual 5-in-1 vaccine which will give protection to their lambs when they're born, from diseases which might otherwise kill them.  There's only one first-time ewe in the flock, "Lambie" (doesn't every flock have one of those?) who will require a booster injection in a month.  I may be able to catch her in the paddock to administer that, rather than bringing them all back down the muddy lane when they're very heavily pregnant.

I marked many of them with blue raddle so I can see who they are from a distance over the next few weeks.  I suspect it will rub off and I'll have to rewrite the numbers before lambing, but there may be enough remaining to enable identification.

Once their wool was off, we could see how fat most of them are!  They've been on pretty minimal feed (or so I thought) for the weeks since the ram was removed from the flock, but the grass must have been growing better than I realised and so they've actually been on a very good diet!  Many of them are looking very low-slung beneath their bellies and they're still four weeks away from lambing. 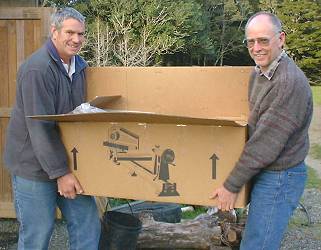 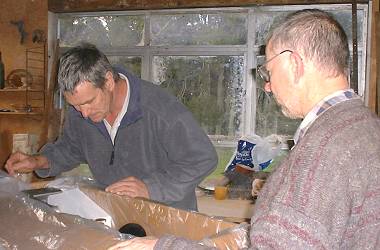 Stephan took Grant with him to Whangarei, two hours south of here, to visit a woodturner for some tuition and to collect his new lathe.  It's actually quite heavy and I had to ask them to stop grimacing with the pain of posing for this photograph while I found and prepared the camera to take the picture.

The weather has been reasonably unpleasant, although only to the point of disinclining us to venture out because there are other things we can do inside.  The ground is pretty sodden now, after days of frequent rain showers, although I really don't think we're getting the rain we are accustomed to.

I went out to the back of the farm to check the cows, or more particularly to check that I could see #307 (who we spent hours following through the bush two weeks ago) since I haven't spotted her during the last two roll-checks and I needed to ensure she was alright.  Earlier this week I brought red cow #94 out of the forestry area next to our back boundary, after she pushed her way through the floodgate in the river and on checking the floodgate rails, discovered a few black hairs as well.  Walking quietly along beside the fence I heard some suspicious crackling in the undergrowth, although I could see nothing through the dense growth.  Such crackling could of course have been a large and fierce wild boar or a shy hunter who didn't want to talk, but did indeed turn out to be a black cow with a white face!

We're going to have to do something about that floodgate to stop the cows being able to push out through it, but still allow the water to push it inwards during flooding.