The week beginning the 2nd of October 2010.
Saturday the 2nd 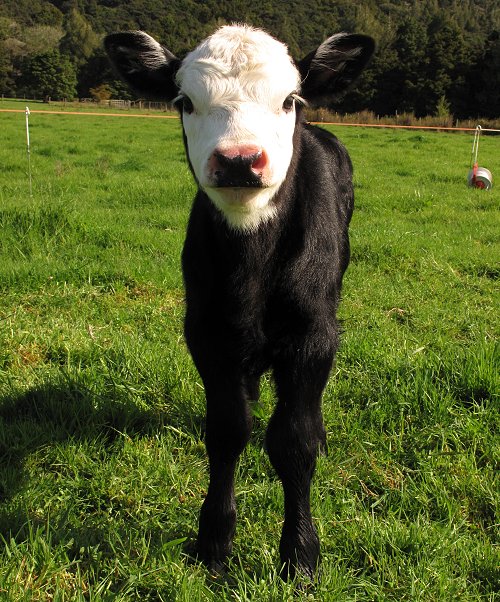 What a sweetie - look at those bright white eyelashes and the matching ear highlights.

I've no idea whether or not this calf will be a keeper; that will depend on how she grows. 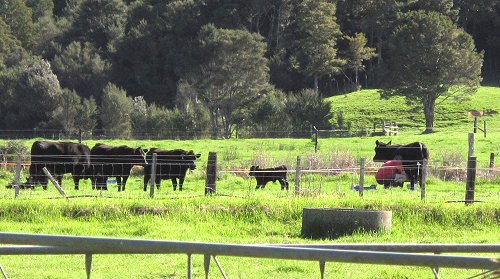 We went out to milk Imagen this afternoon, to ease her udder and introduce her to that whole process again. However she was rather nervous and I decided it could well be because of the unpleasantness of her last milkings when we were both present and that perhaps she'd be more settled if I went away.

Part of her unease will presumably be hormonal, it being only a little over 36 hours since she calved.

Stephan got about 5.5 litres of colostrum from her, four litres of which is now frozen in case we need it during the rest of the calving period.

The children have been coming out with me when I go to move the electric tapes for the cows and heifers. There is some "discussion" over whose turn it is to reel in or reel out the tape, and who's to carry the standards, but Aunty Ruth sorts it all out. 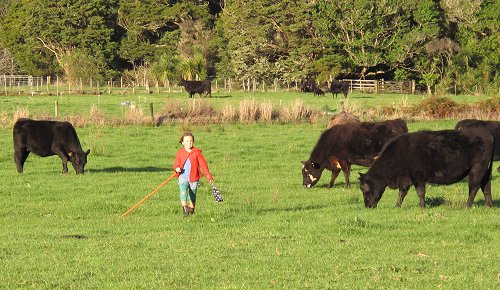 While Jasper and I used the big siphon hose to suck the muck out of the bottom of the ducks' and Pukeko's favourite bath (which is actually the cows' trough), Stella went off to beat some thistles with her stick. She ran around the paddock like a mad thing and Jasper furiously stomped on any he found at our end of the paddock. Their methods will sadly not do much to stop the thistles growing.

Every day we've done the same walk, the children and I, out to whichever paddock has the extra reel of electric tape, run it out to make a new break, roll up the other one and take that to the other paddock to do the same there. Then we go out to the main cow mob to check on Queenly 23. Queenly is the cow who last year lost her calf and is now within the normal calving period (275-290 days), but with her normal gestation being around 284 days, she should have another week yet to go. But 470 also had a week to go when she calved, and I'm determined not to be caught out again. 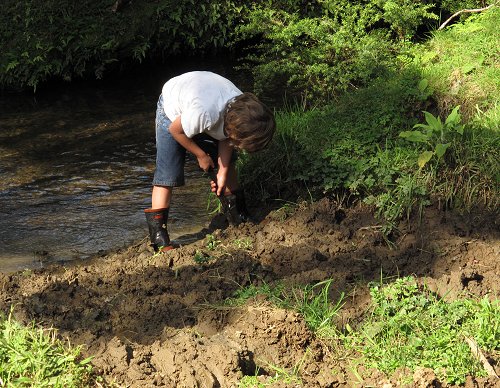 A slightly longer walk to check Queenly today, out to the Small Hill paddock and while we were there, I took the children over to have a look around the Bush Flat reserve area, to see if the orchids are in flower yet.

Jasper found the stream instead and explored for a while.

Meanwhile their parents and little brother had arrived. Roger and Louie met us out in the paddocks as we were shifting the break fence tape for the heifers. 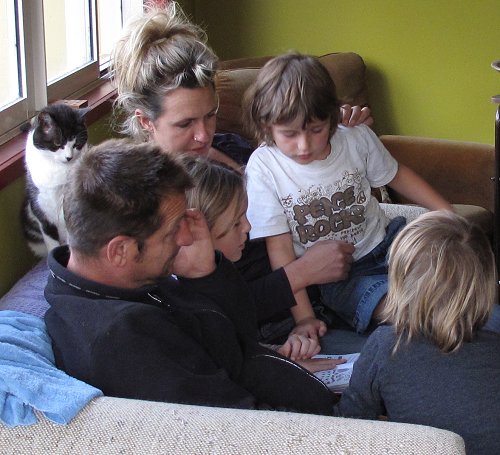 Why does anyone need a lot of furniture when you can fit an entire family of five and a cat on one small couch?

Roger came out with me for the late cow check and in the beam of my excellent new torch (a LED Lenser P14) I saw the eye reflections of some animals in the wrong place, then heard the characteristic grumbling of the bulls: out for a walk again. We obviously need a latch with a spring-loaded ring on that gate!
Roger and I walked around and closed the gates at either end of the lane, so the bulls were restricted in their roaming and left them to it. Working black bulls by torchlight is not a great idea and there was no urgency to do any more once the gates were shut.

I put the bulls into a new paddock, one with a spring-latched gate and electrics elsewhere. 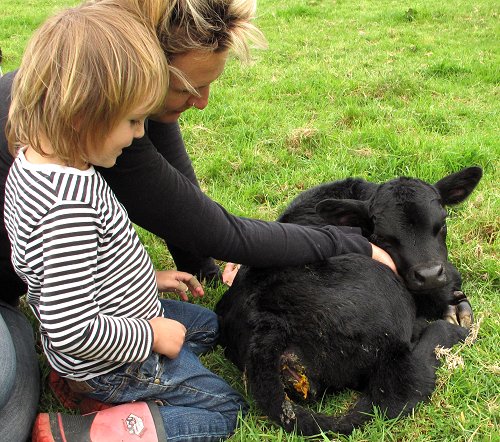 545 delivered this little heifer sometime in the early hours of yesterday, so she's still in the dozy sleeping phase. She didn't seem perturbed by my approach, so I invited Jude and the children to come and stroke her. New calves are so beautifully soft and silky.

I talked to the stock agent the other day and arranged for 478 to go off to the works. 478 is the only Crispin daughter I have - Crispin was the bull I had to hand-rear in 2002, after his mother died - and she produces calves which grow very nicely, but last year's calf was extremely anxious and it was then that I noticed that 478 is also often that way. She's very happy to let me stroke her, so it's not that she's frightened of people, but she's very easily startled by things. I sometimes wonder if cattle like that have some deficiency in the way they see things. Whatever the cause, I want to be breeding quiet cattle and those which get easily upset by things are more difficult to deal with and upset me in their distress, so despite the horror of a truck ride for such a cow, that will be her fate tomorrow.

The homeopathic remedy Ignatia is recommended for emotional disturbance - generally prescribed for weaning time, for instance - so on the basis that it might help and wouldn't harm her, I spent half an hour brushing 478 in the middle of the day, giving her a spray of Ignatia every ten minutes, and another at the end of the day. I'm not convinced about homeopathy in general, although I put some store by Arnica for injury and bruising, but I still had some in my drawer and might as well use it.

478, Demelza and 572 spent the night in the yards so 478 was ready for the truck this morning. After the awfulness of sending the cows off last Autumn because of the appalling use by the driver of his electric prod, I wrote to the company in complaint, a letter which has never been acknowledged. I decided then that I would avoid having to load cows myself again, and send them only when Stephan is available, but the Moerewa works site is about to shut for a period of maintenance and today was the only day I could send her without waiting another few weeks, so I gave myself the Ignatia treatment at the same time as the cow and determined to be brave. One cow is reasonably easy to load onto a truck though, and all went very smoothly.

Unless Mangonui Haulage responds to my letter of concern, I will from now on only send animals away in pairs at the most. The financial cost to me of having them collected is the same per head whether they go as a group of eight or one single animal, and the difference is in the amount of stress caused to the cattle. It must obviously cost the trucking company more to have to pick up smaller lots of animals, but unless they improve their driver training in stock management and treatment, that is how I'm going to manage it. 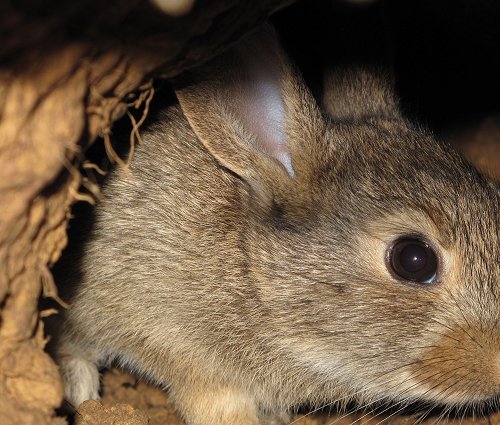 The others, with Rachel who arrived yesterday, all went out to the beach today so I could spend time writing an overdue magazine column. When I'd done a few hours work I went out to check the cows. On my way down one of the hills, I spotted four little rabbits running into a clump of trees, so went to see where they'd disappeared, finding a likely looking hole under a tree root. I couldn't see into it, so put my camera into the hole and took a few photos; this is the best of them. 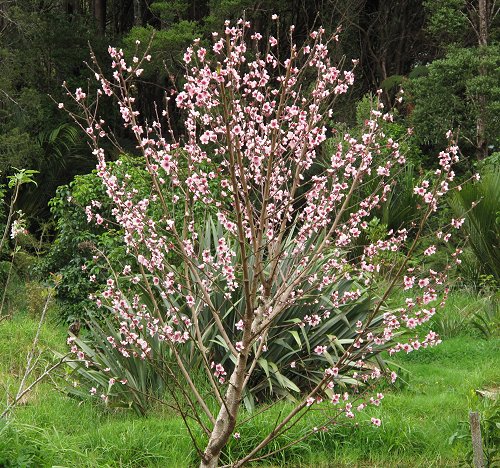 Jude and her family went back to Auckland this morning.

Here are some flowers: Peach blossom on a tree we planted a couple of years ago. 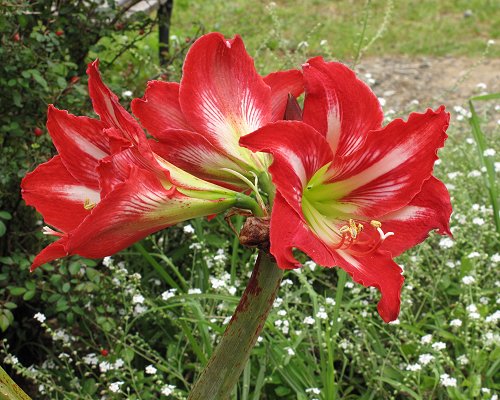 I was given this bulbed plant for my birthday and told it is an Amaryllis. I've watched with great anticipation as it prepared to flower. It's rather impressive! 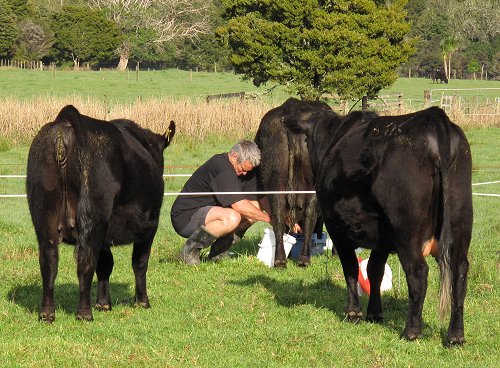 Stephan is still milking Imagen out in the paddock, because she's not yet ready to walk away from her calf. He runs a spare tape around a little area so that the others can't come and pinch her molasses and get in the way.

Rachel headed home today, so we're on our own again after a week of visitors.

I'm sick with a bad cold and I don't think it was the children this time. Ordinarily it's not a big problem to slow down and take it easy for a few days, but now, as calving begins, I need to be fit and able and out doing things - moving break-feeding tapes, drafting ready-to-calve animals out of their mobs, checking calving cows, delivering molasses and magnesium to the cows and so on. It turns a normally exciting time of year into a big drag and I hope it passes soon.