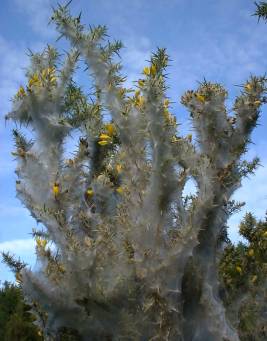 On Saturday, when out for a walk to check the cattle and move them from one paddock to the next, I came upon this wonderful sight: a gorse bush under attack from the spider-gorse-mite.
These small creatures (they're tiny, dark orange and quite hard to see, except when they're all gathered together) have spread all over the farm and onto at least one neighbour's property.  They presumably travel with the wind, by stringing a bit of the web material out into the air and floating off.  We brought them here about four years ago, when we offered a home to the mites which had been taken to the A&P show by the local Regional Council for people to see what they looked like.  I then carried that very prickly branch out to the middle of the farm and inserted it into the center of one of our gorse patches - well, the edge actually, I wasn't burrowing into the middle of that lot!  They are not on every bush we have, but there are significant patches of them now.

We took the three bulls in to the yards today, for their liver-fluke treatment.  Big Bertrand just managed to force himself up the race and onto the scales.  We think that might be the last time he gets weighed, unless we build a new race to cater for such animals!  He weighed 980kg, so he appears to be still growing, as he approaches his fourth birthday.  I wished I'd had the camera with me to record his size in the race - head, neck and shoulders up above the top rail, looking like he could just hop up and jump out.  Then came the exciting part: scrotal circumference measurement!  I find this activity, as you might imagine, somewhat nervewracking but generally, once I've got my hands around that smooth velvety pouch, the bull becomes fairly docile.  I feel I must say, at this point, that my motivation isn't a bull-scrotum fetish, but that the performance recording data includes this measurement as the bull grows, which apparently indicates various things, including age of puberty and his ability to serve numbers of cows.

Here are the silly Guinea Fowl as they now appear, late at night, roosting in places they oughtn't... along with their little hen mother. 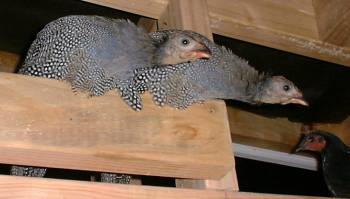 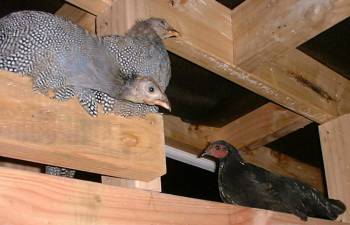 We had the vet out today to complete the annual Leptospirosis vaccination programme - a second jab for the calves and the annual booster for the others.  Barring problems with calving or other unforeseen disasters, we may not need to see the vet here until this time next year.

Wednesday
This is a picture of a very fast calf, just on dark...

I know it's my boy, even if nobody else can really tell.

The Naming: The most popular choice for the name of Virago 13, is Crispin.  I think I can live with that and I'm pretty sure he'll be delighted.  The meaning of the name, according to a couple of sources, is curly haired (Latin) which suits him well enough at present, and if he grows up with a head and neck like Bertrand, I'm sure it'll suit him then too.
My thanks to those people who joined in the name-choosing. 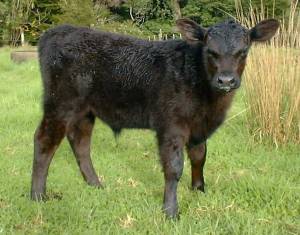 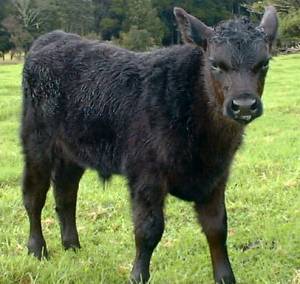 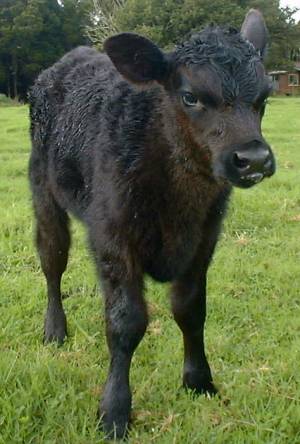 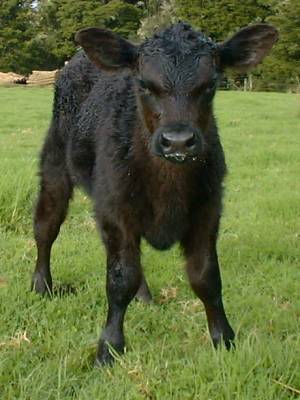 These crazy boys started this as we shoved them out of a paddock they shouldn't have been in, and carried on in the lane, pushing each other back and forth, the smaller of the two, Quadrille 07 on the right, winning the struggle and pushing Lendrich 05 all the way to the end of the lane and through the gate, which I hurredly opened as Lendrich was bulldozed toward it.

Then they carried on down in the yard area below, the whole fight lasting about three quarters of an hour, at the end of which they were exhausted and trotted obediently up the lane as they should have done to begin with.

They sounded so comical, puffing and snorting as they strained to maintain their respective positions.  It didn't look like a serious situation, just a determined power-struggle.  My only worry was that either might be pushed into something which would hurt him.  They've only quite recently started doing this, previously having cohabited quite happily.  It must be the beginning of the "terrible two's" or something.  Quadrille is still a very placid bull with us, but is sometimes not so quiet with the other cattle.