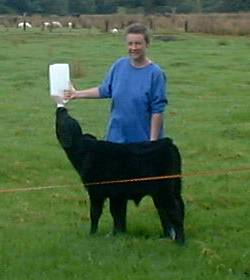 After a whole weekend of rain, to the point of nearly flooding over the bridge, the weather today was absolutely crystal-clear.  Thankfully we get such days occasionally during the winter, to restore a bit of sanity.  While the rest of the country seems to be suffering from a lack of water, we here are hoping for a relative drought.  It gets so terribly wet and muddy here in our valley, that a bit of unseasonally dry weather would be most welcome.

Crispin's weight gain last week was down on expectations - only .95kg/day - but today's weighing indicates he's back up to 1.39kg/day, which is beginning to lift his whole-life average (now that he's a whole 39 days old).  This is all pretty expensive in milk powder, but no more than perhaps buying takeaways for dinner once a week and cigarettes for two, and this option is much healthier and more fun!  Feeding him some sort of hard-feed would be difficult, since we'd be feeding another calf and a cow as well, which could cost as much as feeding one calf on powder.  The other two need to be in the paddock with him for the sake of his socialisation as a bull.  Crispin is prepared to be stroked or brushed by me when he's sucking on the bottle, but as soon as he's finished, he runs back to his mate and #32.  I had considered lead training him for safe control of him as he gets bigger, but so far he seems to be quite certain of his own identity as a calf, rather than a human, which as he grows could have been problematic.  I'm quite happy if he continues to maintain a distance between us, so that I never become a potential playmate for him.

Well, it rained, of course.

With the last drench purchase came this large raincoat... 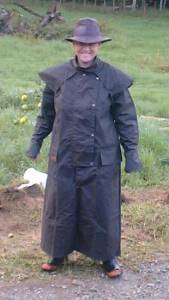 ... A very useful item.  Since it had been raining on and off all day, and I'd already been caught in it once, I decided to try the coat out, on my hike out to see the calves.  The only problem for me was that it wasn't so much keeping me dry (especially since during my entire walk to the back of the farm, there wasn't one single drop of rain) as giving me a thorough aerobic work-out!

I spent the entire day at work, until after dark.  The new "National Certificate of Educational Achievement" (or NCEA) means a huge increase in the workload for Science Technicians.   Fortunately Crispin doesn't mind if Stephan feeds him.
If you are a School Science Technician or know someone who is, I'd love to hear from you.  This is a very isolated part of the world and I've only met the other two people who used to do the job before me.  "Is there anybody out there.....?"

Thursday and Friday were cancelled due to migraine.  I'm trying to find out where I can put in a claim for two extra days at the end of my life.