I am still looking for a name for the orphan boy.  Please continue to suggest names via the form below.  Carlin, Crispin and Craig were the only ones selected from the previous list, with a number of new suggestions being made, including Cliff, Cummins, Caro (Spanish for expensive!), Condor, Charming and Cornelius.
In my dictionary, I discovered "Cain n. History. (in Scotland and Ireland) payment in kind, usually farm produce paid as rent", which could be quite fitting, in that he will no doubt repay in kind (his own, many times over) the effort and expense I put into raising him.

Your Name:
(and email - in case I decide to award prizes.)

(This form no longer works, here for historical reference only.)

The calf has been looking much more comfortable and alert over the last couple of days, since he and I have developed a feeding pattern and now he generally trots over to me when I appear in his paddock with the bottle.  On both Friday and Saturday evenings I watched him racing around the paddock with his tail in the air, that wonderful sign of a healthy, happy calf.  We weighed him yesterday afternoon and he had reached 51.8kg, which means he's been putting on just over 1kg per day since I've been bottle-feeding him.  He still has a bit of catching up to do, to make up for the days when he wasn't getting enough.

The next problem is to find him some appropriate company, so he can continue to live close to the house.  The newly weaned heifers have been in the "house paddock" with him, but they will need to be moved today, before they eat all the grass here.

I'm having so much fun with all the feedback from this site (that is, from the three of you who regularly visit it) so here's your chance to make requests: What would you like to see, from anywhere on the farm - a particular tree or flower or view, a cow you've seen elsewhere in the site, a follow-up on a story I've forgotten to finish?

A week ago I booked the cull cows to go to the works, along with the not-quite-bull #128.  Identification of the animals at the works is still done by paint marks on their backs, so on Sunday evening we brought them to the yards, weighed them for the last time and painted our usual R.M on each of them, then let them out into a paddock close to the yards, for their last night on the farm.  Today the truck came to pick them up to take them to Moerewa, where the nearest works is situated, about 100km from here.  They went from here at about 2pm and would spend a night in the pens at Moerewa and then go up that last race sometime on Tuesday morning. 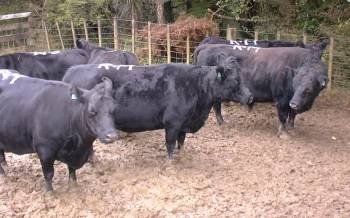 We sent #6 who has been a fantastic cow, one of the original eight Angus heifers I bought back in 1996.  She produced some very nice steers but only one heifer, (who will go to the bull this year).  I'd been watching her carefully for some months, since she began to look rather stiff in her back legs last year.  I inseminated her once only after her last calf and then as she was apparently getting more stiff and uncomfortable, decided that if she wasn't pregnant, she'd have to go after weaning her calf.  It would have been nice if she had been pregnant to the bull/semen I used in her, but I would have had to watch her with great care for the next year, to ensure she hadn't got stuck somewhere or deteriorated too much to carry on.  I suspect she had arthritis, or otherwise some sort of pelvic injury.  It's hard to know how much pain a cow might be in, on a daily basis.  There were certainly good days for #6 but then others when she wouldn't walk through mud, presumably because it hurt to pull her back legs out for each next step.

The other cows going on the truck were there because they hadn't performed terribly well, i.e. their calves were not quite up to scratch!  One was Onix's mum, #44, and two were cows we bred here from Albert, the first ones from that first lot of calves to be culled from the herd.

When I first had to send cows away, I felt sad for days, but it's something which gets easier with practice.  It's also a great deal easier to deal with the deliberate and humane killing of an animal which has begun to suffer from age, than to find her dying or already dead from some accident which might have come about because of her increasing infirmity.  The ones being culled on performance, have been said goodbye to for months, as I made those decisions back in November, before the mating period began in December. 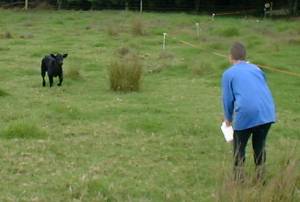 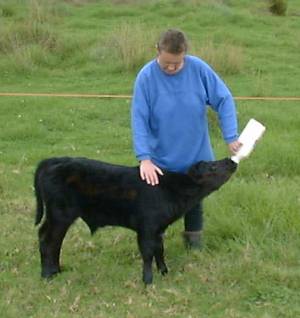 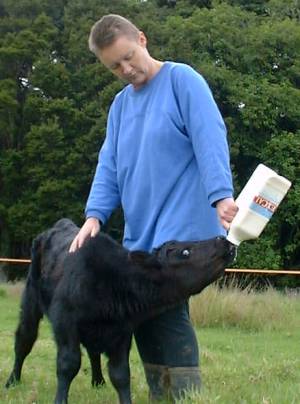 You'll note the maternal grooming going on during feeding.  We seem to turn in circles as he pushes the bottle further out as he feeds.  Then it's back to his paddock mates, #32 and her calf. 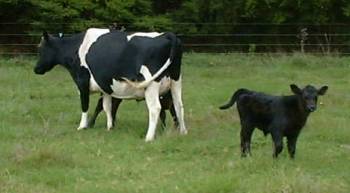 Jill & Bruce asked to see the Guinea Fowl, so here they are... this picture from a few weeks ago.  I'll get an updated image of them as soon as I see them next in good light. 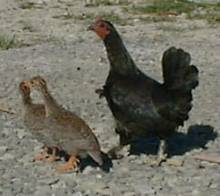 The little hen is the one who looked after them from the moment I snuck them in under her when I brought them home from up the road, where the owner of their parents was about to dispatch them mercilessly.  They went with us to the A&P show the next day and were much admired.  (There were three at that stage, but then one was run over by a speeding duck.)

Whilst I'm feeding my orphan boy, the other cows are out around the farm taking care of their babies.  Here's the other stud bull, also as yet unnammed (apart from being known as Virago 12).  Both his parents looked rather like this when they were little, with the same light coat colour. 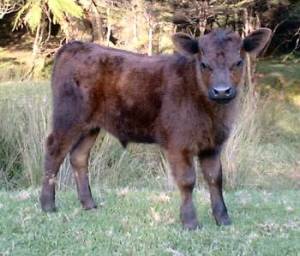