The week beginning the 6th of March 2010.
Saturday the 6th 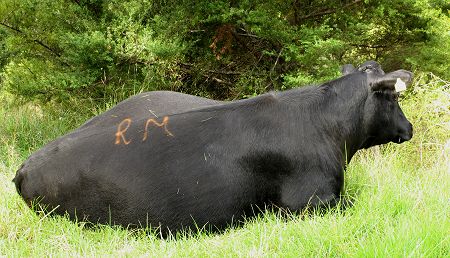 Lucky Ranu 62, still sitting around in the sunshine, instead of hanging upside-down in a chiller. When they go off to the works, we have to paint our initials on their backs for easy identification during drafting. I'd already painted Ranu the other day before we decided she'd not be going on the truck.

She will go to the works, but to Moerewa instead, where she'll go to the export market, not local butchery and supermarkets as #67 did last week. 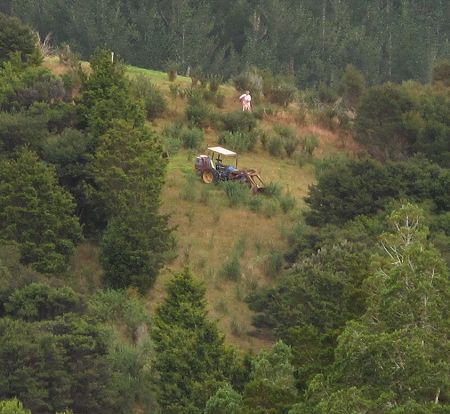 Stephan, on a mission to get around every paddock on the farm, spraying gorse. He's using a lot of herbicide to do the job, but if he doesn't those individual gorse plants will soon grow to cover the entire area and we will have no grass.

This is the PW (Paddock With Two Holes Three Steers Fell In) and the last paddock to be done will be the Pines, to the left. 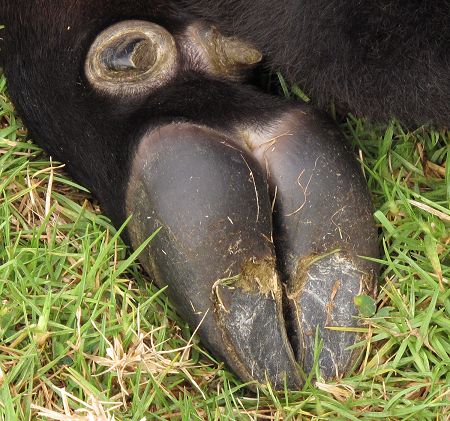 I can't remember if I've seen a calf foot like this before or not - perhaps they're always like this before they start to wear, or maybe it's just this season, with its unusual weather. The heel seems unusually grown over, as they are when first born. Maybe this animal levitates. 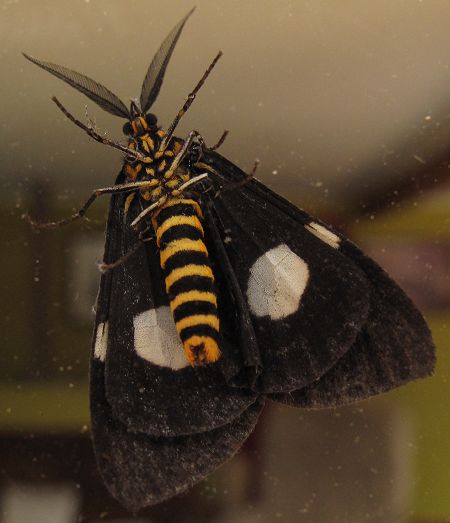 Here is one of the Magpie Moths, the parent insect of the colourful caterpillar I photographed a few weeks ago. 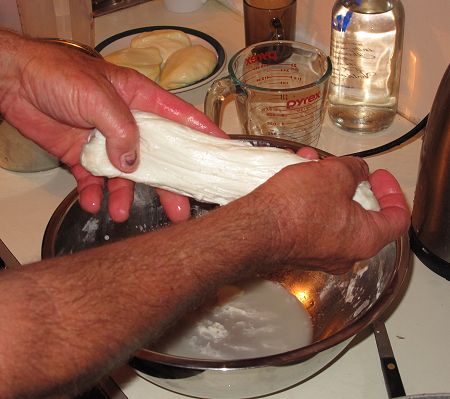 Stephan has been making lots and lots of cheese! We have so much milk. 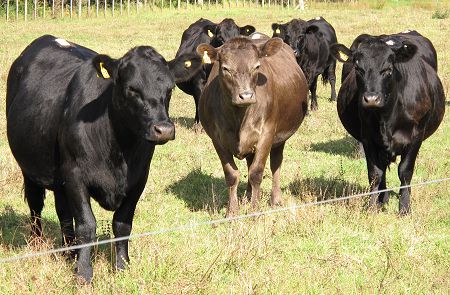 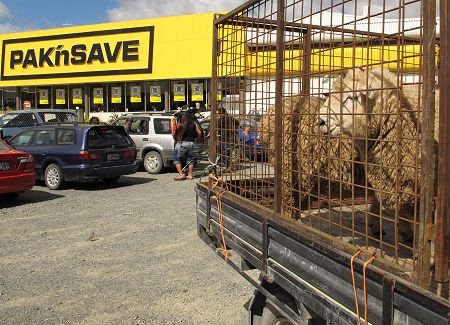 I met up with Ronnie down at the main road and we went over to Madge Hows' place to pick up two rams. We've had Madge's rams in several seasons and our mutton is always very tasty, so when I saw her at the Broadwood sale the other week, I realised it was time to think about getting another one. Ronnie, needing a ram too, asked if we'd arrange with Madge for her to have one too, and we planned to do this trip whenever Madge needed the rams to go.

Ronnie needed a few things from the supermarket on our way home, so while she went in, I kept an eye on our passengers. 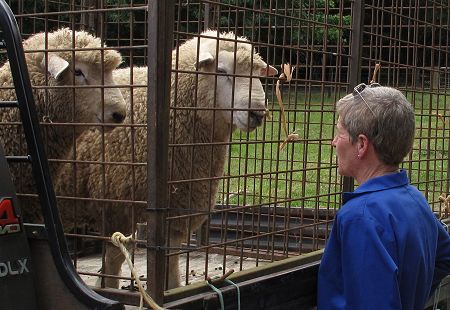 Ronnie had a quick word with them when we arrived home. 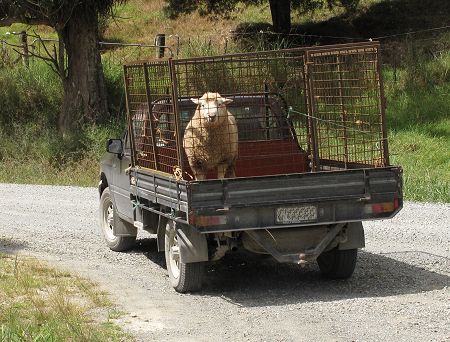 Stephan got into the crate and wrestled the younger (and quieter) of the two off and down gently to the ground, and we let him into the paddock with the sheep, and Ronnie went on her way home with the other. 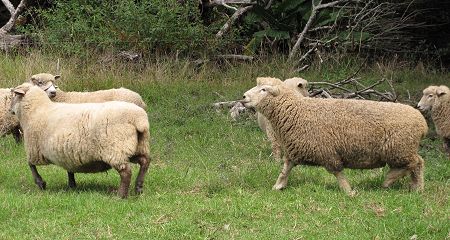 Young ram was immediately on the job, checking out the status of all the animals in the paddock. He was very skittery and nervous of some of the sheep for the first few hours.

I didn't really want lambing to begin as early as August, but we're not really set up at the moment to keep the ram separate from the ewes, so we'll just have to cope with earlier-than-normal lambing. If the coming August is like the last, it'll be perfect, but I don't imagine we'll be that lucky twice. 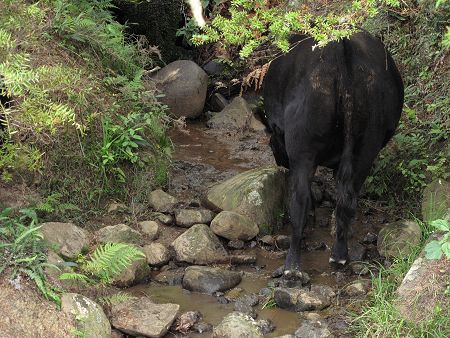 Out in the Big Back paddock I was surprised to see that the water which comes down into this little area doesn't appear to have slowed, despite the ongoing dryness of the season. I'd really like to work out some way of collecting this water into a trough, so the animals aren't standing in and fouling it when they go in to drink from the shallow pool it forms. 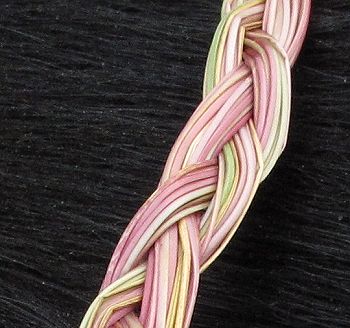 Nature's colours are beautiful: a handful of grass flower stems pulled as I walked down a hill, show how colourful even ordinary things can be when you look closely. 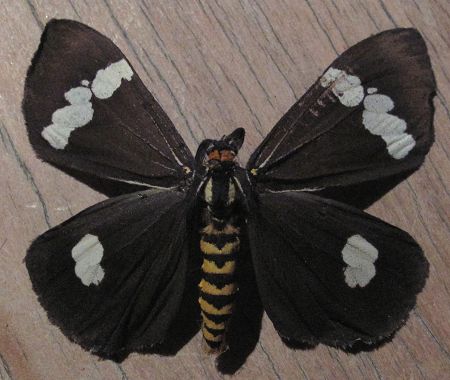 Here's a dead Magpie Moth, showing the spots on all wings. 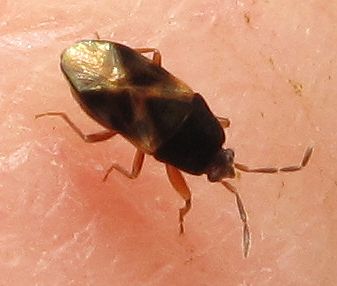 This tiny beetle landed on my hand as I walked around checking cows this afternoon. I took its picture so I could have a magnified look at it. I have no idea what it is. 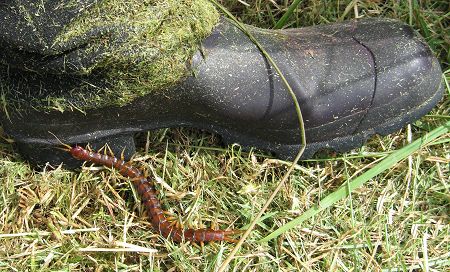 This creature didn't need any magnification! That's one of Stephan's boots and he has enormous feet - the boot is a size 14, about 33cm/13" long, so that's a significantly large centipede!