The week beginning the 9th of January 2010.
Saturday the 9th 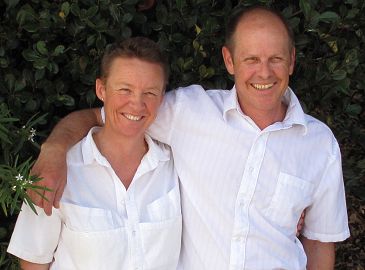 My friend Cliff lives in Canada, and I've been looking forward to catching up with him on his latest visit home. The last time we saw each other was in early March 2006.

Cliff was clearing out a load of old boxes in his parents' garage and there were diaries he'd written when we were both teenagers, and some letters and material from an event we attended together, which reminded me of bits of my life I'd completely forgotten! 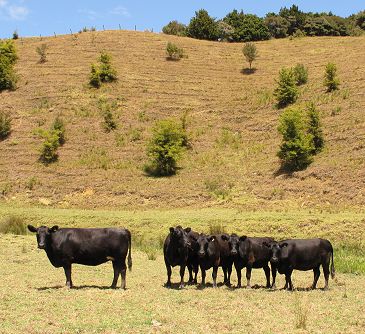 Before going home, I dropped Stephan off at Terry's place to go to the AGM of the Whakaangi Landcare Trust and tootled my way quietly back along the Fairburn road, looking at dry paddocks and the shrunken, slow-flowing river.

These Angus cattle still look in pretty good condition, but they didn't seem to have much to eat; everything looks so crisp! When I drove into our place, I was struck by the lush greenness, after looking at so much that was brown. 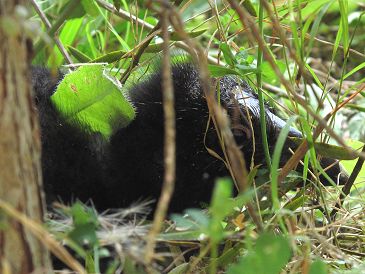 A Pukeko chick dashed across the track in front of me this afternoon, startled by the sudden noise of the bike as I came over a rise. I saw it run in under a little tree and there it tried its hardest to become invisible.

My cattle go up and down the lanes like dairy cows at this time of the year, coming and going for inseminations, calf vaccinations, weighing ... 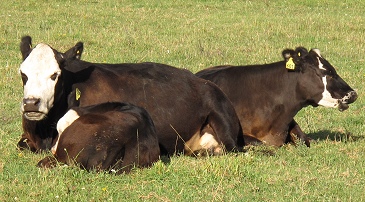 Another family group: 517 and her two daughters. I'd have to religiously record all sitting groups all the time to know for sure whether the cattle deliberately choose to keep company with their close relatives, but very often I find particular animals together. There are strong friend bonds too, for instance Queenly 23 and 486, the two cows which didn't have live calves this year and which spent several weeks together apart from the others, now regularly sleep next to each other. 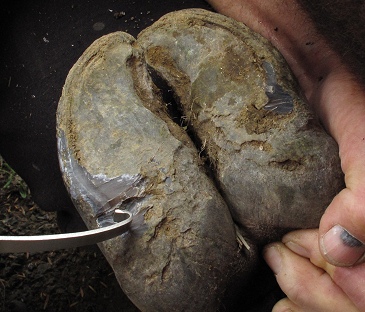 Irene 35 has been limping very painfully on her right front foot. We sprayed it with some iodine the other day in case the soreness was flesh-based and between the claws, but that didn't improve things. So we bought a hoof knife from the vet and today had time to see what we could do with it.

We took turns at paring away any part of the bottom of her foot which looked like it might hide some injury, eventually finding the place which made her wince on the inside edge of the claw on the left in the picture, where there was definitely some indentation which wouldn't normally be there. I didn't cut away very much, but did open it up a little in the hope that whatever infection is trapped within might now be exposed to the air and have the opportunity to drain and heal. We sprayed a lot of iodine around her foot and let Irene go, looking much sorer than when she'd come in! 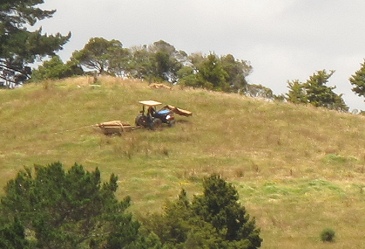 Tomorrow is the day we're expecting the fencing contractors to arrive, so Stephan loaded the trailer with posts and took them up the hill.

There's an awful lot of grass up there! 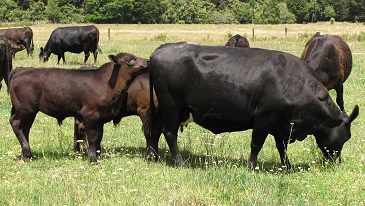 Little bull calves can be quite useful heat detectors. Some of them are surprisingly keen from quite early in their lives, although they won't become fertile for a few months yet.

517's daughter could do with a wash! All the lovely rich milk which gets smeared all over her face as she feeds, obviously collects a lot of dirt. Fortunately I can't get close enough to her to smell it.

I took 479, the hot cow in the picture with the little bulls above, in to the yards this evening and she ran ahead of me and the other animals I took to accompany her, all the way there. How gratifyingly keen! She was a very easy cow to inseminate, and stood very quietly despite never letting me touch her out in the paddock.

During my heat-watch checks I've been spending time taming the yearling heifers. If I can get close enough to a heifer to scratch the back of the top of her tail, where ticks seem to like to congregate, she'll usually discover it's an irresistibly pleasant sensation, which overcomes her urge to get away from me. If I then do the same thing again each time I'm in the paddock, eventually she'll stand quietly when I walk up and stroke her. I've decided I most definitely prefer my touchable cows to those which reject my kind advances. It is very pleasant to be able to walk closely amongst them without their wanting to jump away from me.

In a ridiculously determined last-minute effort yesterday afternoon, Stephan mowed (with a scrub-bar, a large line trimmer machine) the grass along the entire length of the new fenceline, as can be seen from down along the road.

The old fence runs from the top of the left of the photo and down the gully on the other side of that ridge. It's quite a slice of land we're reclaiming! 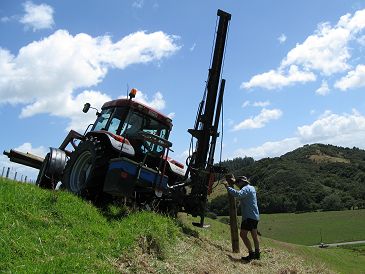 We had 20mm of rain early this morning, which was marvellous, but meant we had to delay the start of work on the new fence.

Mike and Steve, the fencing contractors, arrived late this morning and got straight to work. This is a huge thrill for us. Stephan has been repairing and patching the ancient fence for the last thirty years, never having been able to convince the neighbour that he'd need to contribute to the work.

Writing a recent NZ Lifestyle Block Magazine article about boundary fencing necessitated my investigation of the steps one can take to ensure the costs are shared and so we knew what to do to finally get some action! 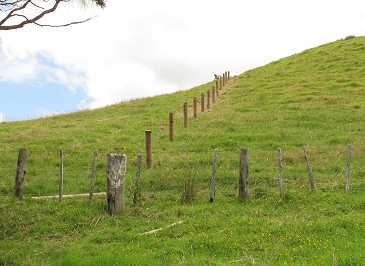 By early afternoon there was an impressive line of posts up the first part of the hill. 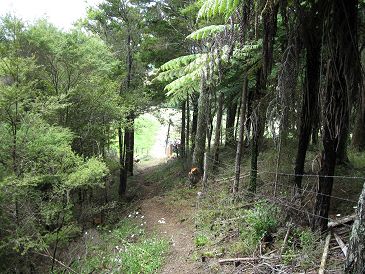 Once the boundary line was established by wires run from the posts where the survey markers were, it became apparent that the old fence was, in some places, almost exactly where it ought to have been. It would therefore appear that the reallocation of land with the installation of this new fence, will be all in our favour! 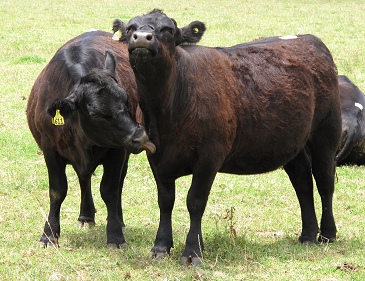 These two heifers can nearly always be found together. When they're wandering around grazing, they seem to be within a few feet of each other.

613 on the right will now let me scratch her tail and rump, but 611 won't have me near her. She watches as I scratch her friend, so maybe sometime she'll relax. 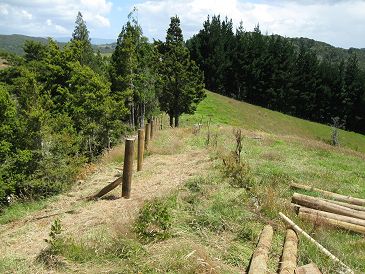 Steve and Mike are thumping as many of the posts as they possibly can, avoiding having to dig too many in by hand. At the top of the hill that we can see from the flats, the fence has to deviate from the actual boundary line because there's an almost vertical drop amongst the trees to the left. 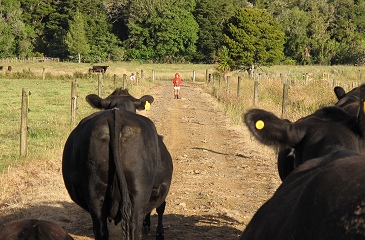 My niece Stella came, by herself, on the bus this afternoon, to stay for a week. I went to town to collect her and then we went to buy a pair of gumboots, since she's outgrown the last pair I bought her.

This evening I had to bring a couple of cows in to the yards and Stella helped a great deal by going ahead of them and calling.

One of the two hot cows coming in was Irene 35, whose foot has been so sore. This morning she was looking a lot better and by this evening, if you didn't know to look, you'd hardly have noticed her limp.

A bit of discreet sexual activity in the rushes this morning. The bull's on the left, behind his current heifer of interest. 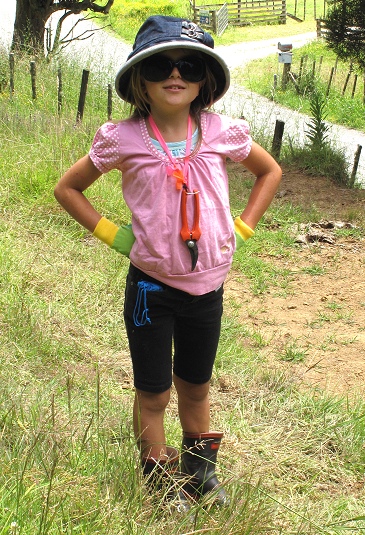 When we were in town together the other day, Stella and I bought a few other things to go with her new gumboots: a pair of child-sized gloves for picking ragwort, an extra pair of secateurs for the same purpose, and an oversized pair of sunglasses which she particularly liked. We had to buy a stretchy band to hold them on her head properly.

Stephan, Stella and I went up and over the hill over the road to see how the fencers were getting on. Fortunately the air temperatures are rather cooler than normal at this time of year, so although the sun is shining, working in the afternoon isn't nearly as exhausting as it might be in hotter conditions. Steve and Mike are having to hand-dig a lot of the posts in along the steep section of the fenceline and Stephan is rather pleased he's not having to do the job! 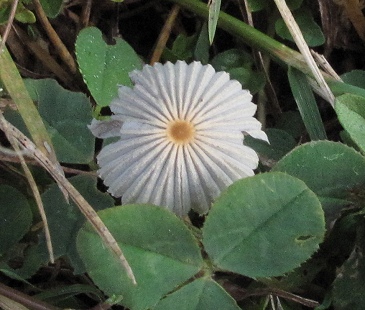 If her mother hadn't accidentally demolished her belief in such things, Stella would probably have thought there were fairies having a tea-party under this umbrella! I wouldn't be surprised, myself. 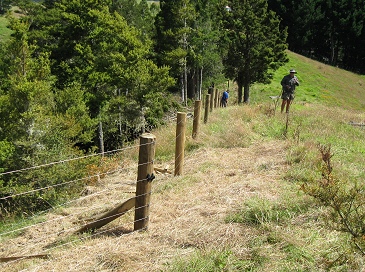 The fencing job advances. The third wire down will be electrified - you'll see the insulator on the post in the foreground - and Stephan will put a hotwire along the tops of the posts when it's all finished. Some electrification will both discourage interaction between neighbouring animals, and it stops the animals from pushing their heads through the fence to reach any greener grass on the other side, which is a major cause of fence deterioration where large animals are being enclosed. 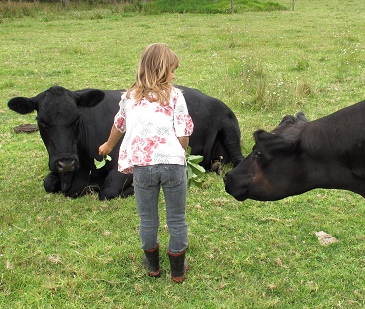 I picked some Puriri for Stella to offer to the cows as I went around checking them this afternoon. I knew Demelza, lying down, would be happy to accept some, and then Stella was surprised by the approach from behind of young 572.

I don't seem to have a calendar for this year and gave myself a bit of a fright yesterday when I remembered we need to give the calves their booster vaccination within six weeks of the first one. We are in time, so brought most of them in this afternoon for their 7 in 1. 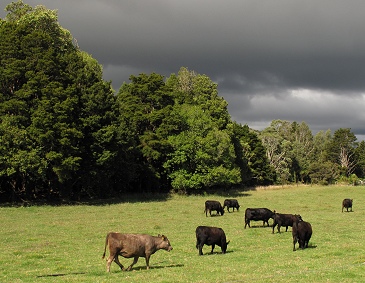 There were showers and drizzle this morning, and in the afternoon sunshine, one of these startlingly heavy skies behind the brightness of the sunlit trees.