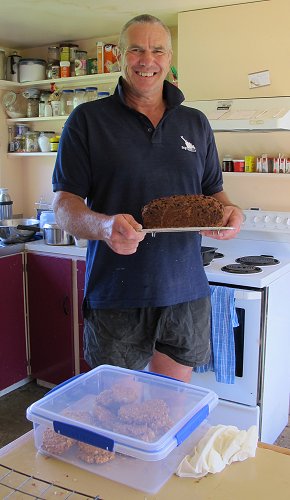 Stephan made a delicious fruit loaf this morning.  Sadly there was nobody here to help us eat it.

The time has come to wean some calves.  I set up my spreadsheet to tell me the date upon which they'd reached 185 days, which is just over six months, so I would have a plan.  We have grass enough to keep them going with their mothers, but the grass where most of them are going to live next, is getting out of hand and those people need the animals at their place! 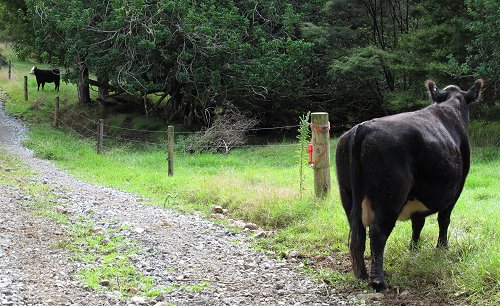 I called the cows and calves in from the Frog Paddock and counted 63 animals, including two calves which ended up waiting by the gate at the front end of the paddock.  I opened the gate, walked quietly around the calves, one went out and the other, mad white-faced 655, ran in every wrong direction in the way only a completely wild calf will.  The other cattle weren't so far away that she didn't know which way to go, but 655 chose to head off away from them.  There was no way I'd be able to do anything with her on her own.  Fortunately her mother, 517, was standing only a little way down the lane, having realised her calf wasn't with the others - or perhaps she saw her on her way past - so she was easy enough to turn back and she eventually headed in the right direction to go and settle her daughter down again.

Thinking they'd now be easy enough to walk out of the paddock together, I was surprised when the cow raised tail and ears and took off just as the calf had done!  I left them to it, because neither of them was going to do anything right this afternoon.  I wrote in my notebook, 517 WORKS - onto the truck she'll go, with the other two cull cows! 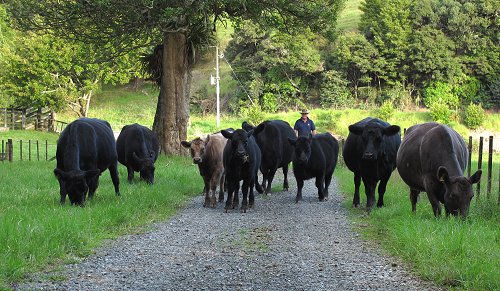 We drafted the to-be-weaned cows and calves out of the mob, and put the rest over the road into the big hill paddock.  Then I weighed the calves and walked the little mob out to the end of the flats, where I drafted the cows one way, and their calves the other.

517 and her calf had come into the lane in the mean time, so I drafted the two of them as well.  I hadn't planned to wean them for another week, but the calf is quite big and old enough to be done now.

I wonder whether the big spider above our toilet gets enough to eat where she is - there's rarely much to see caught in her web, so every few days I feed her.  There are still lots of these pesky little flies in the house at night, so I swat them and throw their stunned bodies up into the web for the spider, who rushes out and grabs them. 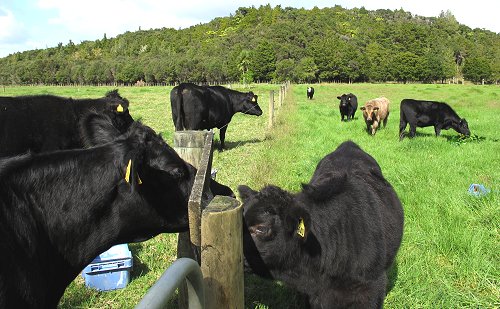 On the right are the calves in the Mushroom 1 paddock, in knee-high lush grass.  Their mothers on the left are in 5d, restricted to a small area to immediately cut down their feed as their udders get the signal to stop producing milk now the calves aren't suckling.  The cows also have access to the area at the top of the lane (where I stood to take the photo), because they can't get to the trough at the other end of their paddock, and because I like to wean with at least some area through which the cows and calves can touch each other - the rest of the fenceline is electric.  There's a trough behind me, shared by the top of the lane and the Mushroom paddock, so both groups will drink there and they can touch noses - I've sometimes seen cows or calves go without water for long periods if they have to walk away from each other to access it.  In the picture, 561 and her son, 640, sniff each other through the wooden rails. 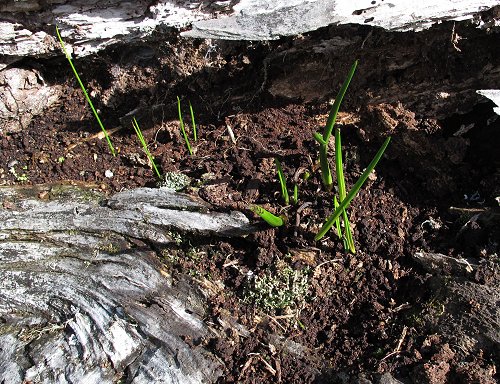 The Sun Orchid colony is emerging again, with an increase in plant numbers again since last year.  The Sun Orchids are the thicker leaved plants on the right, with the tubular Onion Orchid leaves to the left. 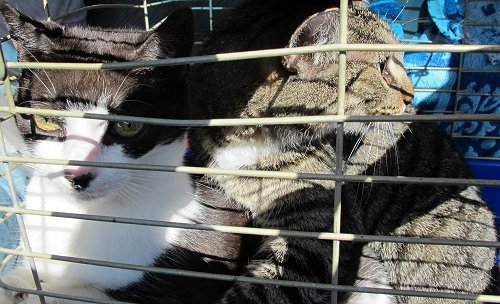 The cats went to the vet today, for annual checks and vaccinations.  Finan hates the cage and yowls continuously when inside, so we put them in together to see if he'd be less distressed.  Most of the time one cat seemed to be sitting on top of the other.  I carried the cage on my lap in the ute while Stephan drove. 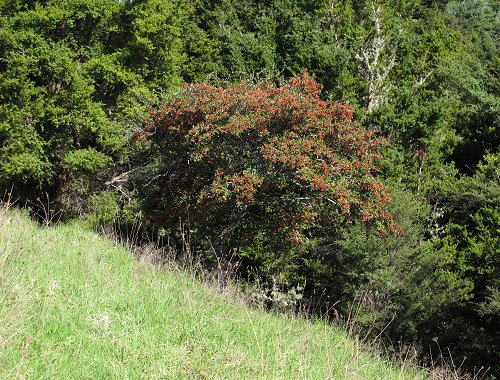 Over the road there's a bush it took me some time to identify as Cotoneaster glaucophyllus.  Once I'd discovered what it was, I could find them all over the place, along with the Chinese Privet which also grows like a weed around the area. 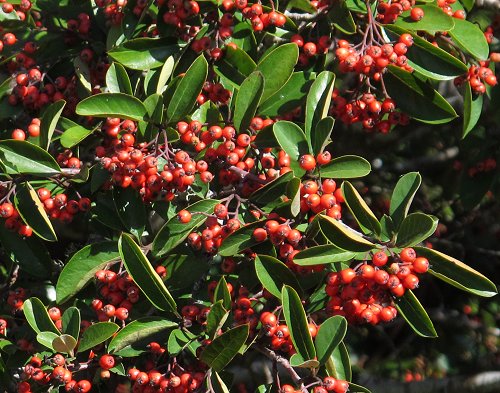 These delicious-looking berries explain how it gets to grow everywhere: marvellous bird food!  Fortunately the cattle like eating the plants, so where they graze, the Cotoneaster plants generally don't get big enough to flower and fruit.  I don't know how this one managed to grow to such a size.  Perhaps the cattle which lived on this farm during its youth didn't have as varied tastes as my cows. 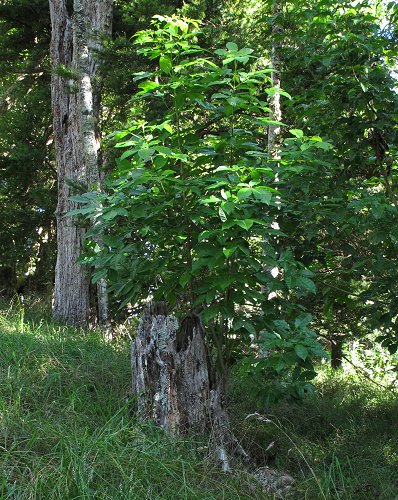 In the reserve area over the road, is the regenerating Puriri stump, of which I took a picture eighteen months ago when I first found it beginning to sprout. 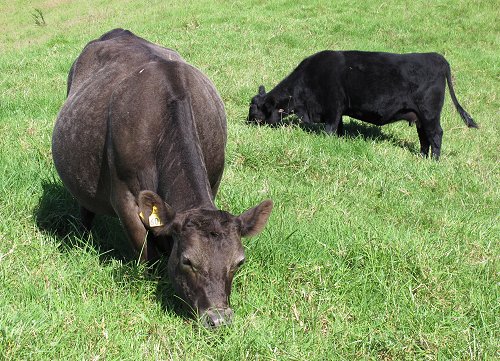 I have not managed the Kikuyu grass well this year, mostly because I don't have enough animals on the farm to keep it well under control.

These are two of the first-calf heifers up on the hill, up to their briskets in Kikuyu.  The feed value of the grass is not particularly good when it gets old, and there's a lot of low-nutrition matter under the green tops. 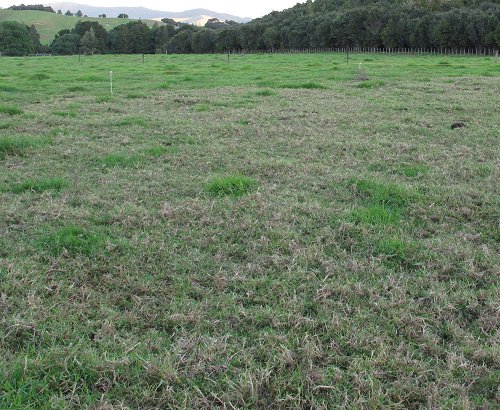 This is how it needs to be grazed at this time of the year, to get it back under control.  This is Flat 5d where the weaning cows are currently grazing.  I move the electric tape down the paddock in strips of about four metres at a time, so the cows eat everything they can of that fresh grass before they get the next bit.  If they have access to the whole paddock, they pick the best bits out and don't do nearly as good a job from a pasture control perspective. 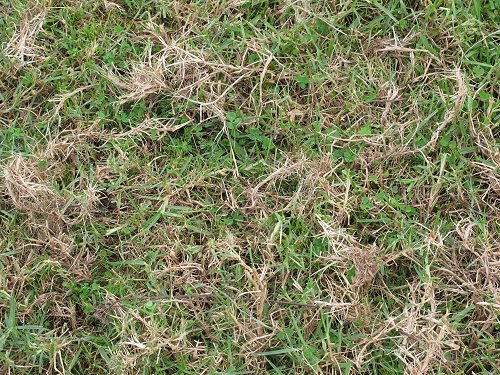 These are the bits the cows spit out.  They are the parts of the Kikuyu plants which are beneath the green leaves.  There are reports of animals sometimes starving because they eat all this stuff and it is so undigestible that the animals then can't process other, better feed.  I've also heard reports of it forming a big ropey ball in an animal's rumen which then causes a blockage somewhere.  I theorise though, that animals which know how to eat Kikuyu, spit most of this stuff out.  I've watched them doing it, and the appearance of the paddocks when they cows have finished grazing certainly suggests it's exactly what they all do.  At this time of year, I've often thought a giant vacuum cleaner would be very useful, to suck up all this loose dead stuff.

Grey 443 had lost her voice by this afternoon, after spending two days calling to her calf through the fence.  It is usually the calves which become silent first from too much calling.  We've found weaning less disturbing this year, since I've put the animals further away from the house than usual. 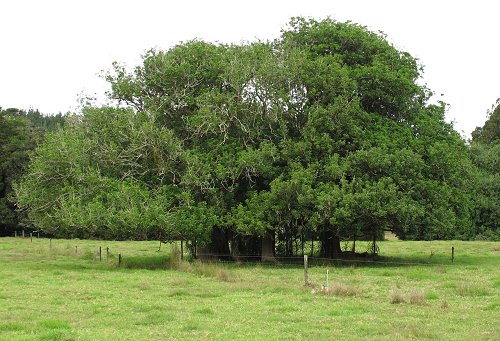 I took another picture of the Puriri trees in Flat 4, for a better comparison with the one I took back in 2004.

The other picture, two weeks ago, was from the other side of the stand. 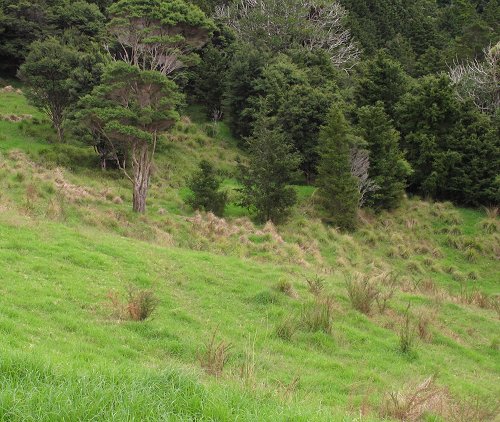 Another progress shot, this time of the sedge in the Middle Back paddock.  An earlier picture, from two years ago shows the paddock with lots of green sedge and lots of brown gorse.  Now there's less gorse and some of the sedge is dying, Stephan having wiped it with herbicide using the tractor-mounted wick boom.  It's good to see it dying so readily, because the last time I attacked it, I did it by hand and it took hours of work. 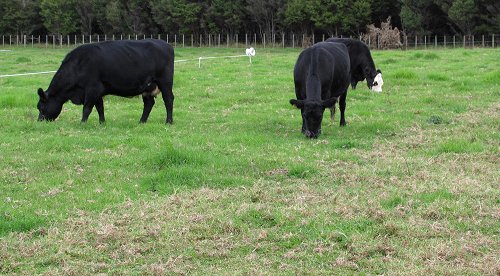 The cows are a bit more settled now, after three nights' separation from their calves. 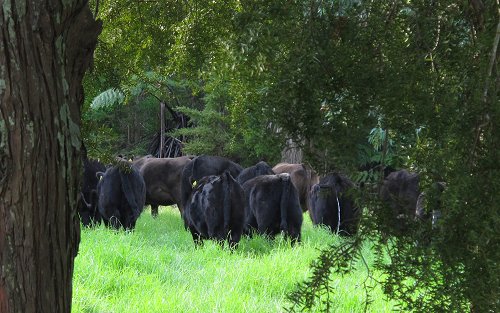 We brought the cows and calves down from the paddock over the road, drafted off another group for weaning and the rest, now a mob of 39, went out to the Back Barn paddock, with lots of grass to eat.

Mike and Chantelle came to dinner, for their first adults-only visit!  We had a delicious meal and a relaxed evening of conversation and it was extremely pleasant. 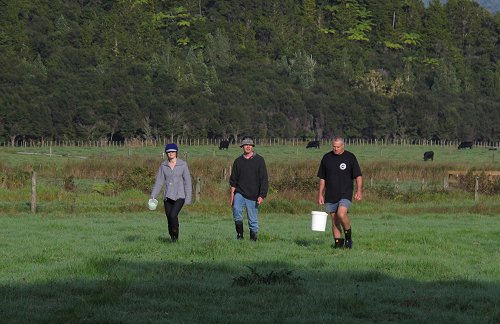 Stephan took our guests out to observe the milking of Imagen, before breakfast. 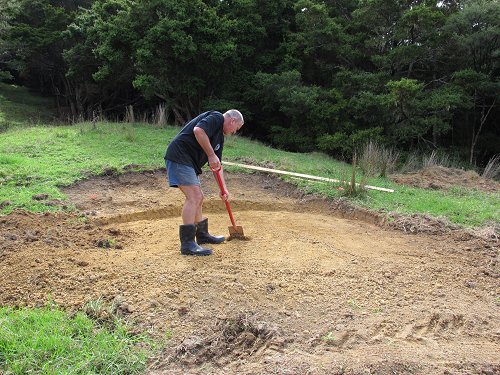 When the big slip happened up in the bush and took out our water line, it caused us to think about how we'd cope if our water supply had been more seriously interrupted.  So when we went to the Dargaville Fieldays, one of our research targets was water tanks.  We found a vendor with a special on large tanks and ordered one last week.  With the help of a GPS unit we have in our temporary possession, we worked out the closest site for the tank which would give us some height and not require the purchase of too much pipe to get the water to and from the tank.  This is up in the Camp paddock and looking out from this point, we appear to be at a level well above the trees near our house. 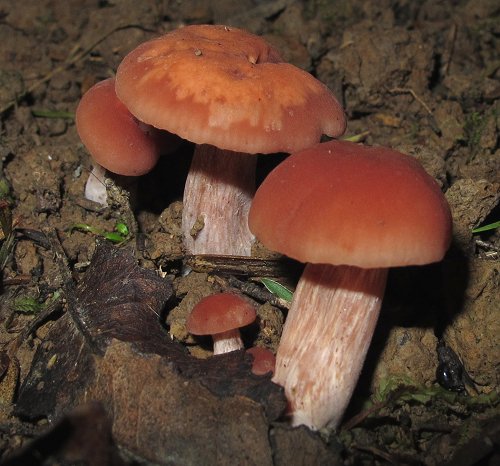 It's interesting fungi time again!  These were tiny little things, a couple of centimetres high, on a bit of a track I was following in the Back Barn paddock, where I'd been hunting for orchid plants.  I found lots of orchids, but they're only little leaves at this stage, like those further up the page.  The sun orchids are all emerging now, and will flower from November, unless they're eaten by animals in the mean time.