The week beginning the 2nd of April 2011.
Saturday the 2nd 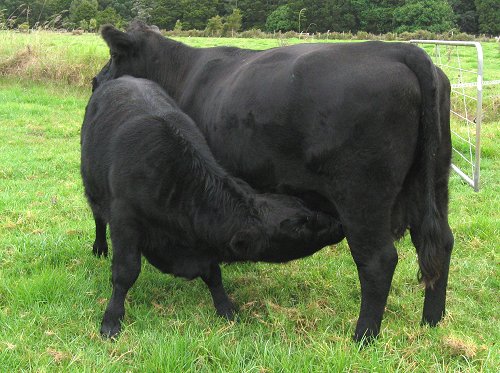 This is Imagen with her son, the calf we deprive of some of his milk supply and of his mother for about 12 hours in every 24.  Obviously he has not suffered greatly!  Imagen comes out of the paddock each evening and after milking in the morning goes back in with her calf and her other paddock companions.  There's always plenty of milk left for the calf. 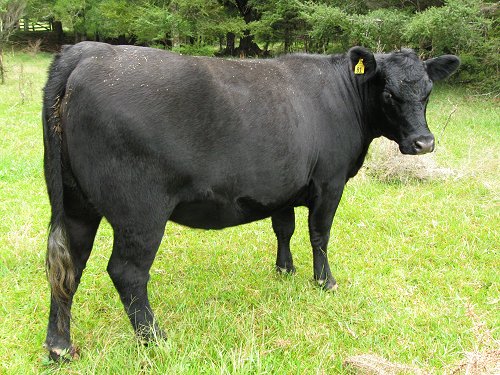 People sometimes write in death notices, "she died doing what she loved".  I suspect that if I'm ever found dead on the farm, it won't have been while doing something I love, it'll be of heart failure while I'm hunting for the elusive Eva!

The cows, calves and heifers were in the Small Hill paddock, from which Eva was rescued sixteen months ago.  I had seen everybody else, but Eva was nowhere to be seen.  So I began the terrible search, my blood pounding in my ears, and half an hour later she still hadn't turned up.  I don't know how much more of this I can take!

Going back to check the main mob again, to see if she'd quietly joined them, there was a call from across the stream and up on the scrub-covered hill, from a healthy, upright animal, and down she came, grazing on her way, without a care in the world.  I wish I didn't care about this animal so much. 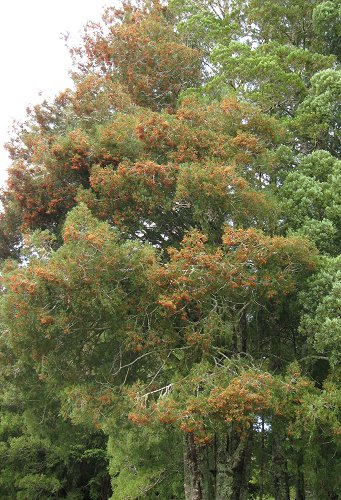 Some of the Kahikatea trees have spectacular loads of berries this year. 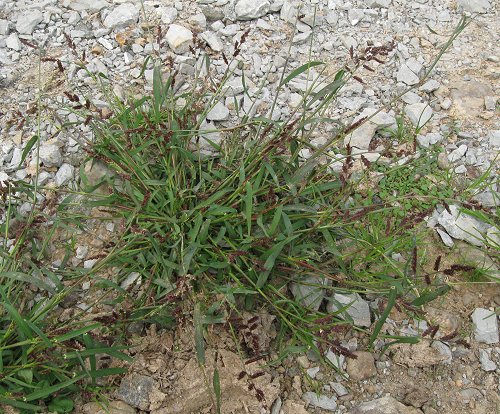 I can't remember whether this grass has always been around, or if it's one of the new plants which came in with the river metal when we put it on the tracks.  I'm not overly worried about it since it seems to be a marginal area plant only, growing only in places like this.  The cattle really like it.  It looks to me like it might taste really sweet, but I haven't tried it myself. 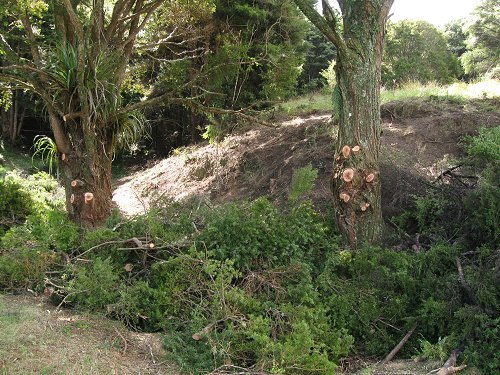 In the Camp paddock, there is an area where underground water movements cause mounds and unseen hollows beneath the grass.  The water in the troublesome area comes down the hill and into this little gully at the bottom, and then goes underground, but before doing so, leaves some mighty deep holes for animals to fall into.

A few weeks ago I watched as Imagen's calf struggled to climb out of one of those holes, successfully fortunately, after slipping in backwards.  Today Stephan spent a few hours pruning the big Totara trees which line the area and piling the prunings into the holes.  We worked out where we can put a culvert pipe to provide a safe crossing for the cattle and fertilizer trucks. 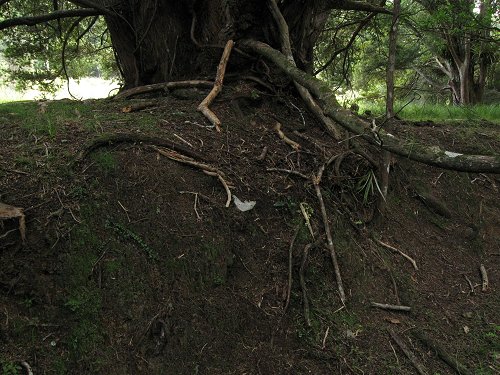 Walking back from where Stephan was working (across the other side of the bright sunny strip in this photo) I wandered along down by the stream.  The white thing in the picture is a sheep's jaw bone, caught up in the root matter under a Totara tree - possibly near where it died, some long time ago. 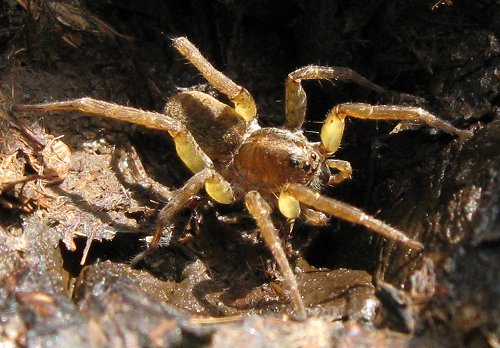 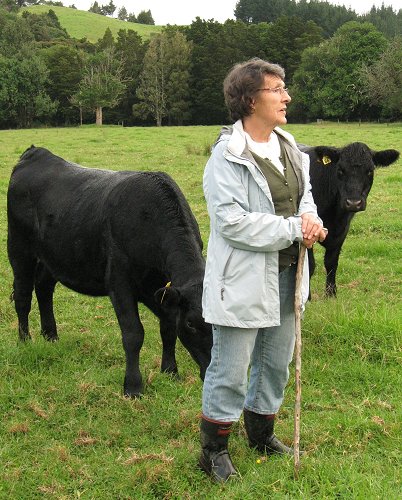 Daylight Saving ended at 3am, becoming 2am.  Ordinarily I'd hardly notice, except I was lying on the couch watching TV as I was, to put it mildly, a little unwell.  It took me a while to work out why my clock said five and the TV kept telling me it was four o'clock.

Jill came up for a visit and in the late afternoon we went for a quiet walk amongst the cattle.  Jill stood very still while she was investigated by little Dinky 94.  (I called her Dinky because she was so remarkably small as a calf.) 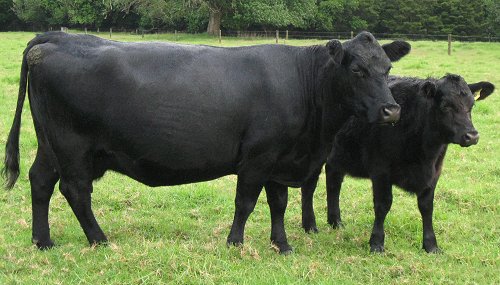 This is 99 with her mother, Abigail, who was Isla's first daughter. 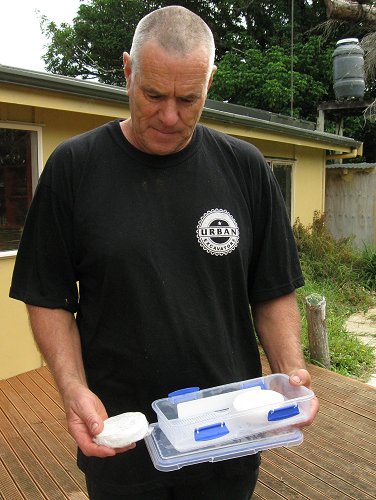 Stephan has learnt to make Camembert-style cheese and here is some, with its white mould growing nicely.  He's very pleased about it.

Our friend Lilo has been teaching him.  Some of his cheesemaking he has learnt with others at her cheesemaking courses, and some during private lessons. 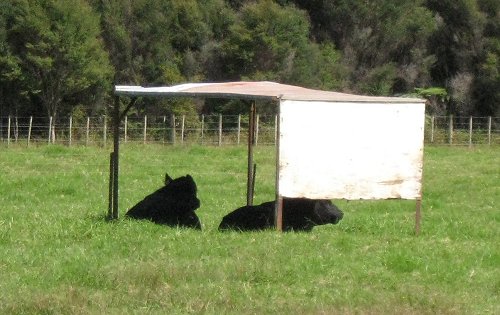 The two bulls are in 5a, the paddock with no natural shade.  They both seem happy enough with the artificial provision. 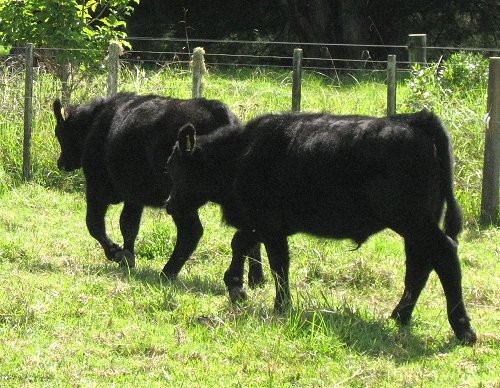 Jill and I moved the cows and calves from 5c, the paddock on the diagonal from the bulls, across 5d and out into the lane, then down and around to the Camp paddock.

If you'd like to see a view of the area with labels, try this.  There is also a whole farm aerial map available to regular readers on request. 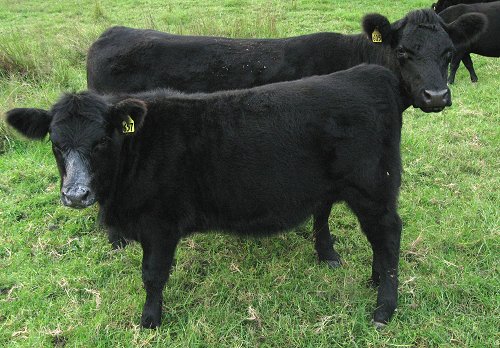 This year's two-year-old heifers have done exceptionally well with their calves.  Most of them are daughters of bull 43 and those heifers in particular are a really good-looking bunch.  I am so very thankful that bull 43 tested clear of the genetic defects AM and NH, or I'd not have kept all these lovely animals in the herd.

605 is the third daughter of 371 in the herd.  371 had a nasty udder, inherited from her Hereford/Friesian-cross mother, but her daughters all have good udder conformation.

Jill and I stayed and watched the cows and calves for a while and as I was turning to look at some movement, I heard a sharp noise, and there was a calf on his side struggling to get up, having been bunted off his feet by a grumpy Squiggles (Ivy 73).  The calf seemed fine and carried on grazing. 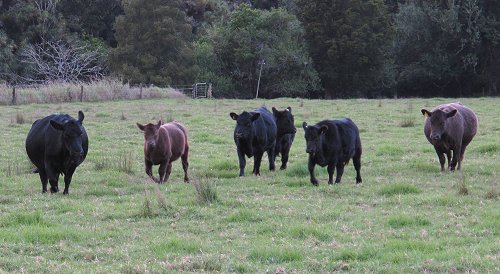 Abigail, Curly's calf 647, a yearling heifer, Imagen's bull calf, another yearling heifer, and Curly 562 all coming up to the gate to move to another paddock.  Imagen, Bella and Abigail's calf are just out of the picture.

I've been watching Abigail for any sign of her coming on heat today, since tomorrow will mark three weeks since I inseminated her.  So far, so good. 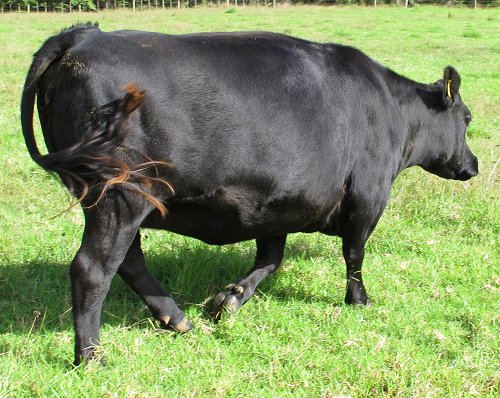 This is 572, star heifer of last year, who then lost her next calf at about four months' gestation.  Having spent the year eating only for herself, she has stacked on rather a lot of condition, i.e. fat.  If I don't restrict her access to feed, that could become a problem later in the year.  She's pregnant again now. 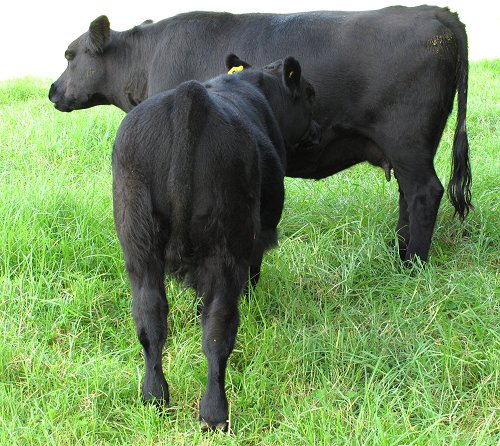 Damara 74 and her calf, 96.  She's still feeding him well, and satisfactorily maintaining her own body condition.  He must be over half her body weight by now. 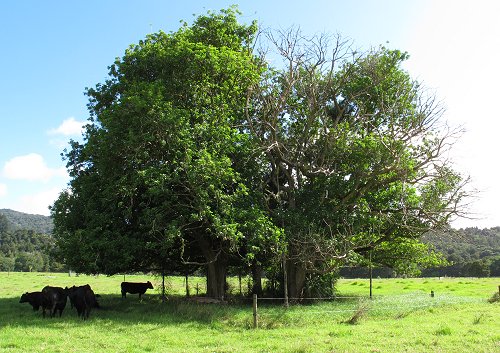 This is the stand of Puriri in Flat 4.  In 2004, before we constructed the protective fence around this tree, Demelza, then a calf, spent a morning inside the electric tape I'd put up around the area, stripping the bark from one of the trees.  There is a picture from that year, taken from the other side of the trees.  It seems to me that while the damaged tree is now mostly dead in some parts of its canopy (there is life on the other side, and sprouting again from the bottom), the rest of the trees are showing significant benefit from the protection the fence has afforded them. 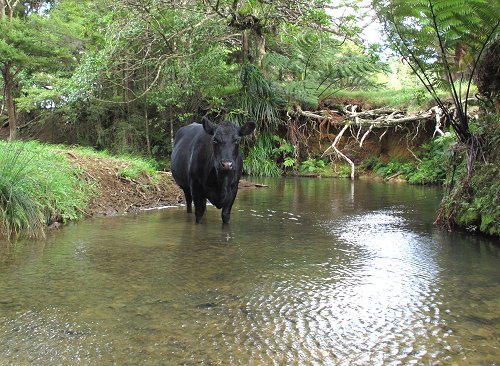 This stream runs through the Camp paddock and remains the water source for the cattle when they're there.  The area behind Demelza on the other side of the water, is now fenced off from the cattle to protect five large Puriri and to prevent further damage to the ground above the crumbling area where those roots are exposed.

I've been trying to work out what to do about the ground where it is being eroded during every flood.  I think Cabbage trees might be a very good answer, with their deep main tap root.  I had thought of trying to grow something on the bank where it keeps crumbling, but I can't see that working.  The Cabbage trees are all fruiting at the moment and I've begun collecting and germinating seed.  I'll plant here as soon as some of them are ready.

There is a fairly obvious fence-line option here to stop the cattle from standing around in the water, and if we spread some of the river gravel up where the cattle walk to cross the stream, that will significantly cut down the amount of soil they tramp into the waterway.  We'll also install a couple of troughs in the paddock.

Abigail was quiet and calm all day today.  I think I may have had a 100% success rate on insemination this year! 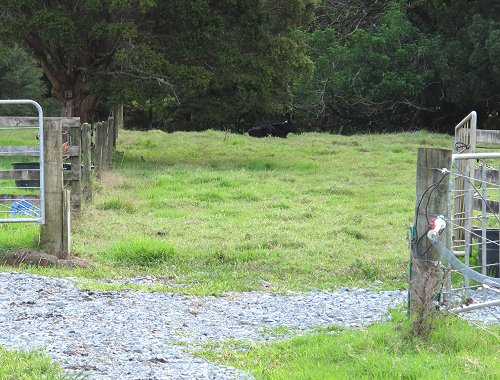 I called the cattle out of the Camp paddock today and counted 69 animals as they passed through the gate.  There should have been 70, but I thought perhaps one had dashed through behind another and I'd not seen it.

At the yards we drafted and weighed all the calves.  It was when I'd finished that I realised there was a gap in my list of weights: little 645 was missing.  We left the yards and headed back to the paddock, and half-way up the lane we could see him, sitting quietly waiting for his herd to come back.

He's been a bit of a loner, this calf, all the way through.  I keep finding him out of the paddock he's supposed to be in, having somehow found a way through a fence.  He's 604's son, the second-to-last calf born this season.  His sire is the double-defect-carrier CA Future Direction.  The company I bought the straws from, Samen, won't refund on any of the price, despite the American company from which they came making refunds to most purchasers of that bull, so I figured I'd use him over this heifer when I had no other low-birthweight semen.  It doesn't matter if this steer calf is a carrier of the defects, because he's not a breeding animal.  Had the calf been a heifer, I'd have had to test her to see if she carried either defect.

We walked the single calf in to the yards and up into the race and onto the scales.  Then he went back to his mother, who hardly seemed to have noticed he was missing. 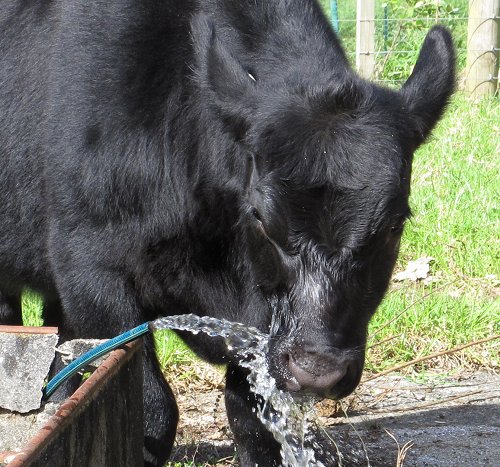 It's better straight from the tap!
The running hose had been dislodged from the bottom of the temporary drinking container and a number of animals spent time drinking from it. 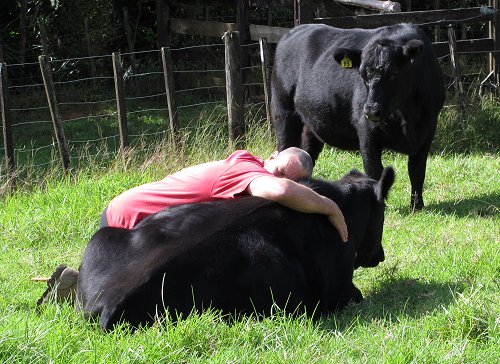 On our way out of the yards, Stephan had some quality time with Zella.  She's quite calm when we're near her, so we continue to spend time stroking her, touching her as yet un-formed udder, because come calving time this year, we'll want her to feel quite comfortable about either of us being near her, as she becomes our new housecow.

I spent my day completing an article for NZ Lifestyle Block Magazine.  I'm still really enjoying the writing process, although I continue to find it difficult to organise myself to meet the deadlines set by the editor.  I am not sure what stops me, because there is no difference between spending hours writing in one week and spending hours writing in the next.  Procrastination is a hard habit to kick, but I sense there's something really simple I need to figure out to stop doing it!