Finally!  Minty did it, late last night, twins, one of each and all is well. 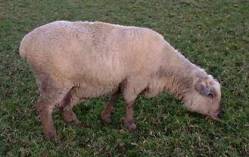 Minty is now a much narrower sheep.

Here are the three cows I am expecting to calve today, based on previous gestation lengths.  That doesn't always work out, but they are under close observation from now on.

#6, about to have her fifth calf.  This one's dad is Merchiston Playboy, so it'll be Onix's ½ sibling.  Last year's calf was the same cross.

#75, one of Albert's first daughters and in calf to Bertrand.  This will be her second calf.

#94, daughter of Albert and one of the cows who was a calf when I came here in 1996.  She's in-calf to a Pinebank-Waigroup (stud) bull.  This is her first time. 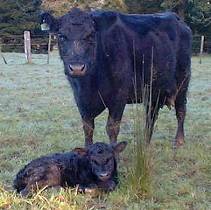 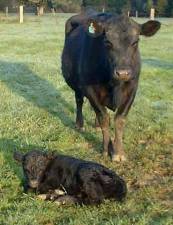 Both calves born probably in the early hours.  No further action by dusk.

The Isla Sweepstake is defunct.

To our great surprise this morning, Isla began making ready to birth her babe and did so in remarkably quick time (while I wasn't even looking!).  Our concern in her case, was that she is so fat that she might have had some difficulty calving.  But, with a great deal of bellowing and carrying on, greatly disturbing her paddock-mates, she gave birth to a heifer.
Isla was the first stud heifer born here and this is the first of the next generation; an auspicious day. 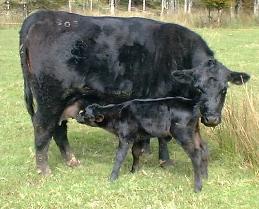 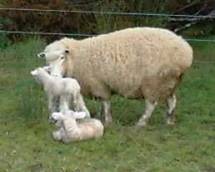 What a day!  Two more lambs (the last of the officially pregnant ewes).

A feeling of great appreciation of our residence in an unpopulated green and quiet place, far away from strange happenings where people decide to fly huge planes into huger buildings.  It was with great pleasure that I went and stroked a beautiful new shiny black head, with Isla looking on.  Small animals are a great salve for the spirit. 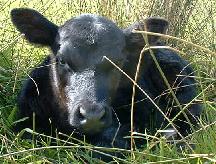 I saw a little bird, a swallow (only one, so it can't have been summer), fly out from under our bridge.
I went to see if it was nesting beneath my path and it was.

So I said to the swallow, I said “little swallow”, I said,
“your choice of home puts you at great risk and it is doubtful”, said I,
“that you will raise your chicks to fledgeling status,”

“for one day soon, it will rain and when it rains,
you will doubtless all drown.”