Finally a day with sunshine!  What a relief.  But then the thunder clouds gathered and the rain poured down again.  Two more lambs born in the middle of it all and the rest stood around looking miserable... 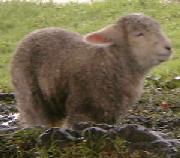 Some people have asked for news of the Inverse Facelift Lamb… Things are progressing slowly; the tape eventually fell off one side and the eye looked very sore again.  I caught him again on Monday afternoon and he now sports some new tape, but he still doesn't look that great. 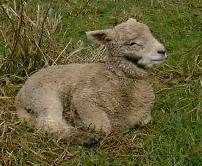 In the spirit of a troublesome lambing season, this poor wee thing appears to have some sort of limb problem.  I suspect navel ill (basically various nasties get in through the soggy navel area after birth and cause infections with symptoms including lameness) and have watched her get worse over a few days, so time for some action.  This is the second day of penicillin injection and a quick bottle feed, just to help her along; with a seemingly useless front leg, it must have been difficult for her to get a good feed every time she tried.  The rain poured down and it seemed like a bit of a challenge for a sickie to be thrown back out into such a night, so out with the shopping bag raincoat!  A very fetching look, don't you think? 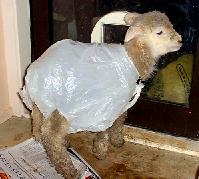 If the lambs weren't enough to convince, here's a real proof of spring. 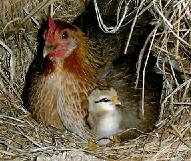 In case anyone was wondering, this is why we don't go out much... 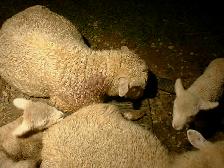 We have to push really hard to get them to move.  These WICKED sheep (Babette and Lulu) are probably mostly waiting around until someone next goes toward the shed (and the barrel of maize).

When we do finally get out, we only get in trouble!

We went to town to post a letter in the evening and saw a wee cat lying in the middle of the road.  He was alive, so we put him in a box and brought him home, no owner being available at the scene at the time. Noddy (as is his name) spent 20 or so hours curled up in the box sleeping off some of his trauma and I made several phone calls to all the appropriate places to advertise our find. 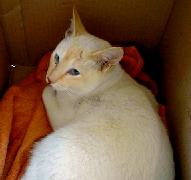 None of that worked, but by perseverance and a habit of reading telephone books, I found some numbers of people who lived in one of the streets behind the main road and phoned one, who just so happened to live opposite the people who Noddy lives with.
So Noddy has gone home, been taken to the vet and will recover from a burst eardrum, cracked jaw and much bruising. 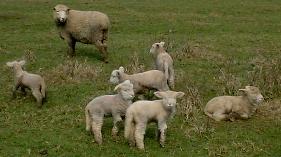 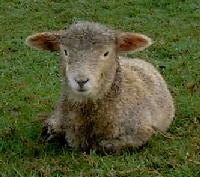 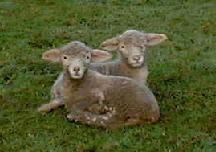 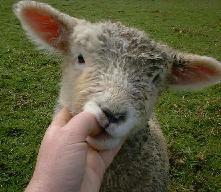 Babette's boy, whom I occasionally supply with a supplementary feed from a bottle.

Still two sheep to lamb, the second here being Minty who must be about to explode! 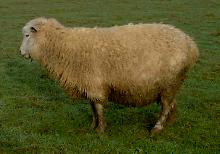