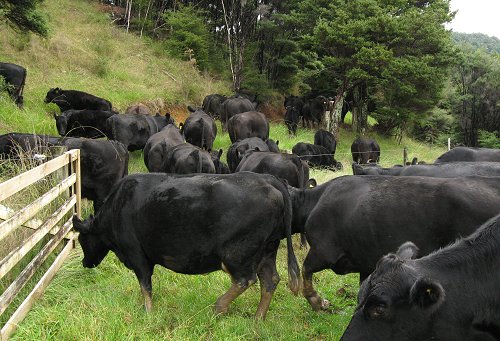 The cows are gradually getting the grass down around the farm.  Here they are going into the PW via the gate which marks the start of Route 356, the track we put in back in 2004 to help in the rescue of Steer 356.

The cattle haven't been in the PW for ages, so it's in dire need of hard grazing!  But it'll have to be done in stages because the cows need to be fed well in lactation, and their calves need good grass too.  After weaning, the cows can be put in here to do a proper clean-up.

I went up the hill in the PW to check the cows late this afternoon.  None of them were down the bottom of the paddock and I could only hear the odd call from up the hill - and then a call from too far over, as if it were coming from the Middle Back Paddock.  That turned out to be exactly the location of the calling cow, and all her friends, because the gate between the two paddocks was swinging open.  I did not open the gate, nor did Stephan, and nor could a cow, because of the way the latch is positioned on the post. 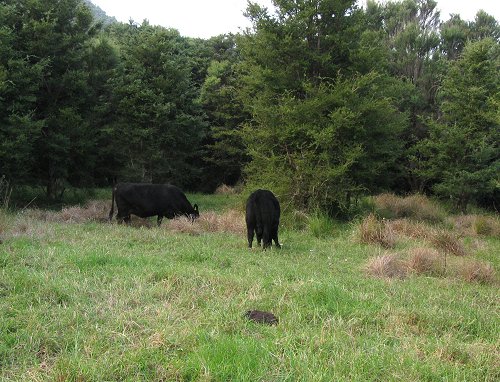 At the top of the Middle Back paddock, the gate to the Big Back paddock was also open.  We've had visitors; rude ones.  I presume this is the unwelcome work of passing pig hunters, or dope growers, or just troublemakers.

Now there were cows all over the back of the farm and I needed to find out where they were before I shut any gates, so I didn't accidentally separate cow and calf pairs.  I went around the Middle Back to find out which animals were there - and came across this dying and dead Sedge which Stephan wiped with the tractor-mounted wick boom the other week.

In the end I had to give up on trying to shut the cattle into any single paddock, because I had no idea where some of them were.

I checked my list and saw that all the cows I had seen had their calves with them, then called the cattle out of the Middle Back and over into the Big Back Paddock, then went back down the hill to collect my bike and rode around from the bottom, to the other side of the farm. 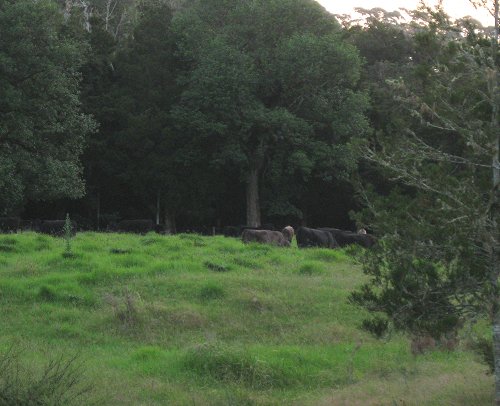 In the Bush Flat paddock, knee deep in grass, I found the rest of the cattle happily munching.

It really doesn't aid good farm management to have unknown bodies wandering around leaving gates open!  Now instead of having my cattle still in the PW eating grass as I planned, they were all down here, where I would probably have brought the bull calf mob instead.  It's almost impossible to move cattle out of a paddock like this once they have their heads down eating - perhaps with a good stock dog, one could convince them to move out, but that is not my way. 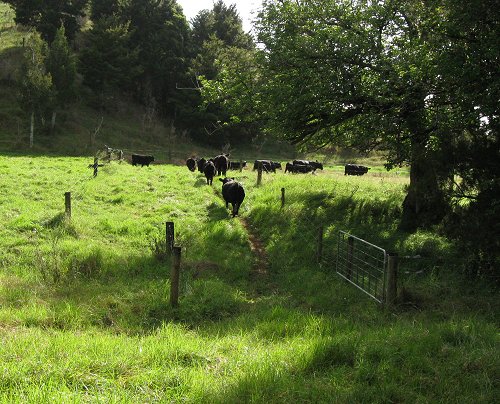 This morning I checked that all the cattle were present, pushed those who were still in the bottom of the Big Back paddock into the Bush Flat with the others and shut them in there to finish grazing it down properly.

There are still some yearling heifers, and Demelza, up in the PW, so I left some of the lane gates open for them to make their way back toward the mob whenever they came down the hill. 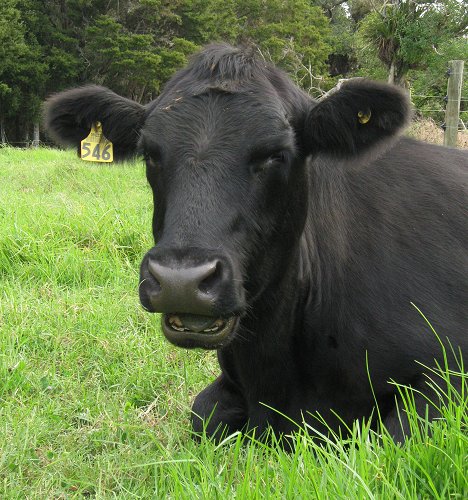 This is 546, of whom I took a photo last year when she was dribbling green saliva and I wondered what was going on in her mouth.  Whatever it was resolved itself at some stage and I haven't seen any green dribble for months. 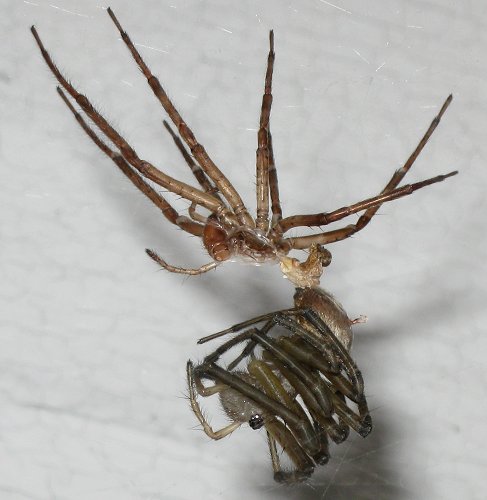 I went into our bathroom (I actually mean the room in which there is a shower, toilet and handbasin, but sadly no bath at all) and got a horrible fright seeing our pet spider looking like she'd died!  (I had presumed she was he, because of her body shape and size and the occasional presence of a smaller spider near her which looked like the picture of the female, in my spider book, but later I realised my error.)

She was hanging with all of her legs drooping downward, but by the time I returned with the camera, she'd changed position and I realised that I had discovered her just after she'd shed another skin!  Fascinating.  I've never seen this process before.

There is a stalk-like protrusion from her back which is still attached to the discarded skin above. 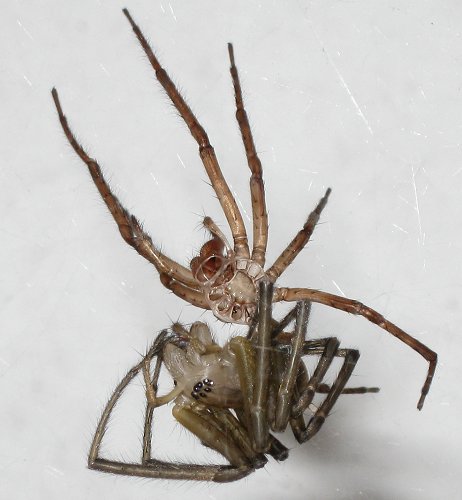 From a slightly different angle, you can see the difference in colour between the old skin and the soft new skin which presumably hasn't dried and coloured yet.

Sometime during the next day I found the skin on the floor and put it with the other one I saved from last time. 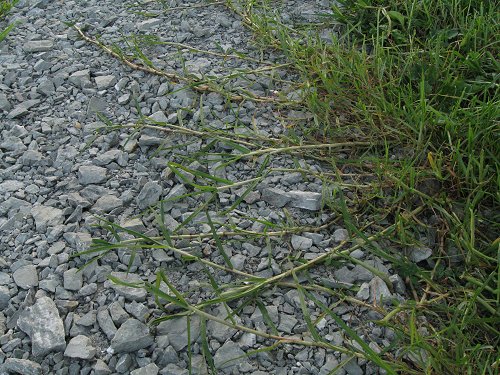 The Kikuyu grass is quickly on the move!  These tendrils have grown in just a few days.  It is an astonishingly fast-growing grass at this time of year, and it's quite hard to keep it under control in a good growing season.

I consulted my medical practitioner this morning.  Constant headaches for the last three months have become somewhat trying and just a little worrying.  It's hard not to imagine a stray melanoma cell having wandered around and settled somewhere tricky, like my brain (it's now six years since my Melanoma was diagnosed and excised).  However, that is not the most likely problem, and I suspect that if it were the cause, there'd be very little anyone could do about it anyway.  I'm paranoid about being a hypochondriac.  There's probably a name for that.

I spent my day working as the Chair of the Kaitaia Vets Board of Directors.  There was a bloody coup, bodies all over the Boardroom floor, chaos and complete disorder ...   That's enough of my April Fool attempt.  There has been a rearrangement of responsibilities while we restructure the Practice and select and appoint a new CEO.  I was Vice-Chairperson.  I think it entirely appropriate that everyone now address me as Ma'am.