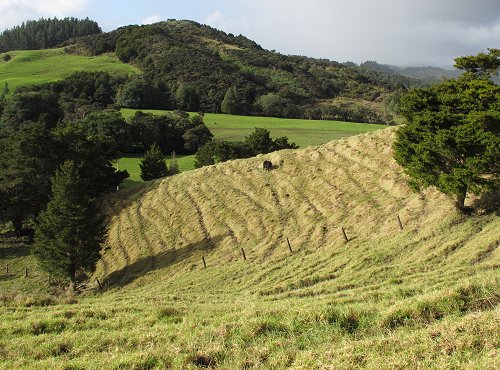 The hillside over the road now looks rather different, although much of the grass is lying down, rather than eaten.  It will green up again in time, and the stolons which have been laid on the ground will root or rot and eventually this part of the hill will be indistinguishable from the rest. 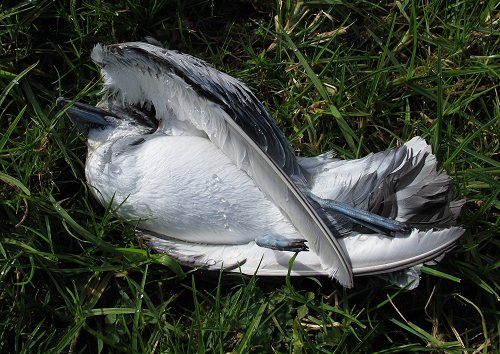 Riding home after checking the cattle this morning, I spotted something odd lying in the House Paddock not far from the lane.  It was a sea bird, like the ones I saw reported on the television news and on internet news sites a few days ago, being found all along the west coast of the North Island and also far inland where they would never usually venture.  The huge westerly storm which caused all of that haze last week, caused a sea-bird "wreck", and thousands of birds died.  This one looked like it had fallen dead from the sky and had probably been here for two or three days. 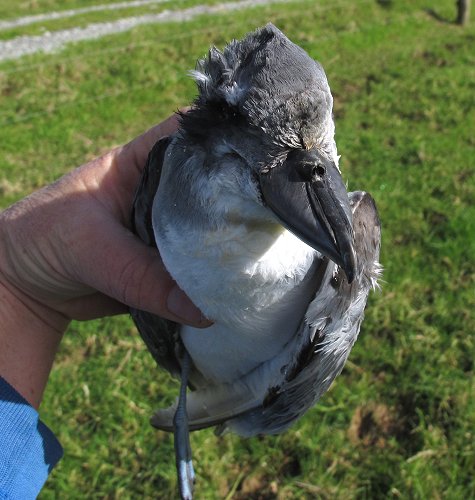 I made some enquiries and identified it as a Broad Billed Prion, which was the main species found during this event.  Many birds were found alive but exhausted further south and some were re-energised by vets before being taken back to the coast and released.

The local Ornithological Society's beach bird-count found over a thousand dead birds on Te Oneroa a Tohe (90-Mile Beach) in the weekend. 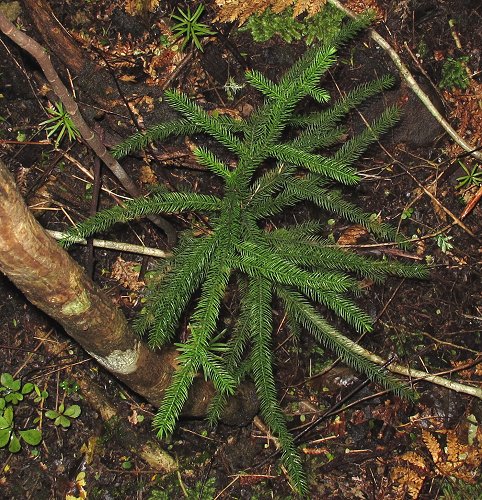 Mike and Stuart came for a walk with us back up into our bush block, so I could show Mike the new orchids, and because we fancied exploring the block a little more.  Having the GPS with us was very useful, being able to mark particular points, and also to see when we'd turned back on ourselves.

There are lots of Rimu seedlings and saplings up there.  They're pretty, soft-leafed little plants when they're young. 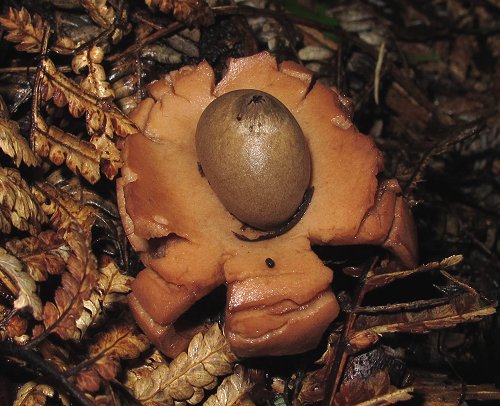 One of the many types of puff-ball fungi. 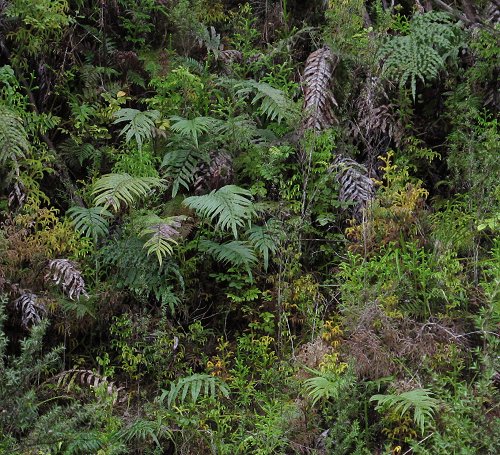 There was a slip up in this block about 16 years ago, and now the raw earth is entirely covered by all manner of plants.  At this stage they are mainly ferns and mosses. 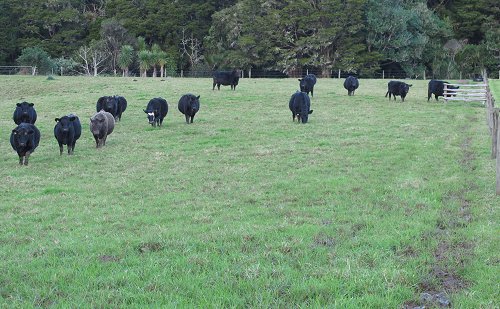 The cows have been in the House Paddock, giving it a good going over.  Imagen had been in here on her own, so she was still in sight of her son, and when I brought the other cows to join her, she chased them back out of the paddock.  After observing her last year, I knew there was no problem with mixing her back in with the mob: she's the boss and nobody hassles her.  In fact she took exception to one or two of the other cows and chased them around for a little while. 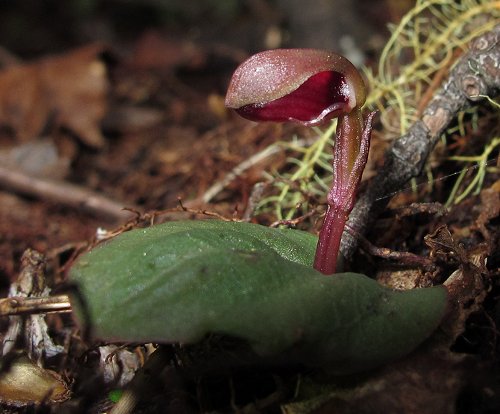 Another of the little plants up on the Pine Tree ridge, carefully marked so I don't accidentally stand on it.  The flower bud has taken a couple of weeks to reach the point of opening.

Today it rained quite a bit, so although I went out, I took no photos. 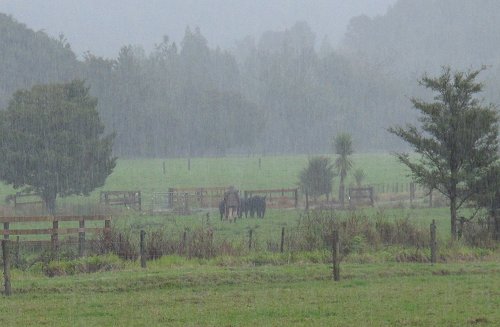 It rained rather a lot today as well and because I was expecting a visitor, I asked Stephan to go and get the little bulls in so that Imagen's son, #95, could go off on a truck to his new home. 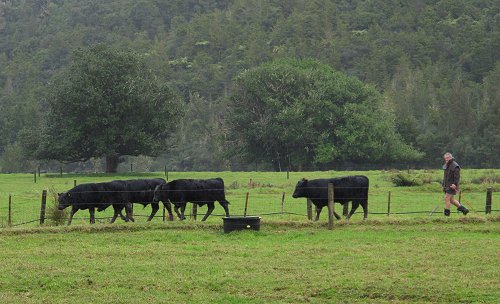 It feels really odd being inside, watching him working the cattle, doing my job while I'm doing something else.

This website has grown to the extent that I had to find more storage for it and that combined with the poor recent customer service of its host of the last seven years, prompted me to look for a new provider.  I discovered I could become a website hosting "reseller", which would fulfil my own space requirements as well as providing a cheaper option for a few organisations with which I'm involved; I bought a big chunk of storage capacity and can re-sell portions of it on to a number of other people with websites.  Everyone in my group will end up with cheaper hosting than they would have done individually.

I've had some fun setting up a website for Stella, so that while she's away in England with Jill, she can stay in touch with her friends.  And through some tricky exploration of the "Wayback Machine" website, I was able to resurrect the contents of www.nzfreelancewriters.org.nz, the Freelance Writers Association of NZ, and get that site back on line.

My visitor today came to me through a chance conversation he had with someone I'd spoken to about this a few weeks ago.  It wasn't my intention to take on the work of editing other people's websites, the plan being only to offer hosting services, but one thing often leads to another.  Most websites can be shifted between servers and remain fully functional, with no change noticed by their viewers.  But some are coded (the "machinery" behind each of these pretty pages you see, which makes them appear as they do in the chosen type-faces or fonts, colours and arrangements) in such a way that they need some re-coding before they'll work properly somewhere else.  My visitor's site is one which needs some work, and that began today with his visit to discuss the changes he wished to make.  The lucky man was treated to freshly baked biscuits for morning tea, with soup and toast for lunch, followed by some delicious fruit loaf. 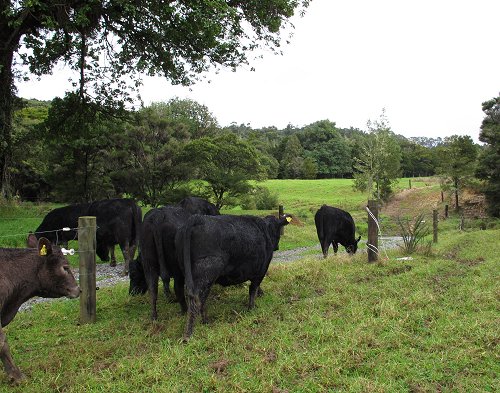 In the afternoon, when it was no longer raining, I shifted the pregnant heifers from the Small Hill paddock to the Bush Flat.  There's still a bit of grass around, but I've had to slow the cattle down quite a bit.

From around 10pm there was the most extraordinary electric storm!  I've never seen so much lightning.  There were flashes every two seconds at one stage, with some spectacular bright trails through the clouds.  Even when things had quietened down a bit towards the end, I still counted them at 12-15 flashes per minute.  Fortunately the activity was some distance from us, so the thunder wasn't of the most alarming volume, and it built up as a repeated and frequent noise, so by the time it was at its loudest, the cattle would have been accustomed to the noise.  Very loud thunder can startle them into stampeding, which wouldn't be safe for the cows, in particular, where they're currently grazing in the PW.

There was some very heavy rain for short periods, which brought the rivers up, and they must have risen further overnight, by the look of the pond in the morning, all full of muddy coloured water again.