The week beginning the 17th of September 2011.
Saturday the 17th 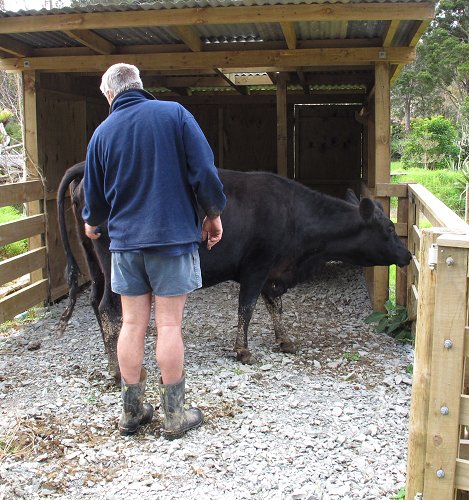 Today it was the heifers' turn for a copper injection.  Afterwards I sent sixteen of the mob of twenty out to the back of the farm, and kept the four I expect to calve first, back to stay on the flats.

Armed with grooming brushes, Stephan and I spent some time with them before we sent them on their way, he with Zella in the little milking shed, where we hope she will calmly spend many hours over the next few months!  She's not been in there before and Stephan had said he wished to walk her in a few times to get her familiar with it. 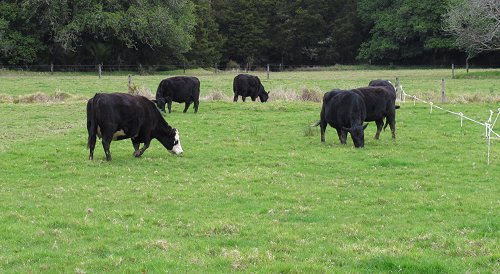 I did some calculations on the available grass in Flat 1 and its width, and how much a cow in late pregnancy requires in feed every day, then gave them a little bit more than I calculated in each break.  It would be better that they put on more condition than I expect, than that they lose any at this stage. 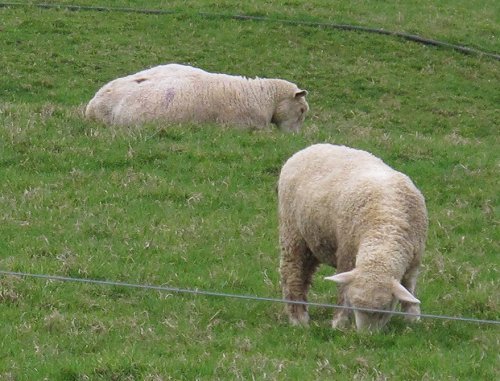 This is the tagged ewe (lying down), the last yet to lamb.  She had behaved oddly during most of the day, and eventually, because of that black patch on her back and her repeated attempts to scratch her back with her teeth (difficult with that great big belly!), I realised she had flystrike!  In the last couple of days we've had some big blowflies in the house, which is quite unusual at this time of the year, and it was that same type of fly I later noticed bothering the ewe.

We took her and a few of the others down to the milking shed, which is the closest and easiest place to catch her, and put some anti-maggot powder on her back.  She has quite enough to worry about at the moment without adding any more stress! 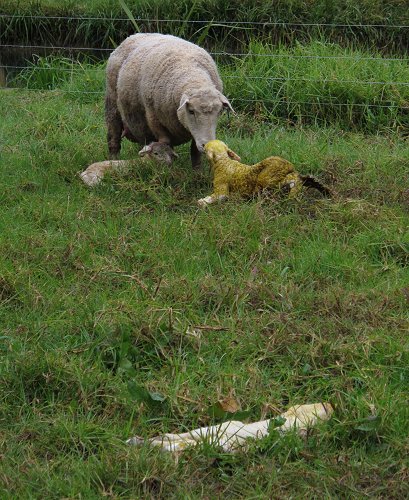 Stephan got up early and came back to tell me the ewe had produced and was feeding a lamb.  I fell asleep again, meaning only to snooze for a few minutes, before going to make sure all was well.

An hour or so later I woke up again and by then the ewe had produced her second lamb, and it had failed to escape from the pool of fluid into which it was born.  I hate having dead lambs, especially if they die only because I wasn't there at the time to ensure they didn't!

The ewe began to deliver the third lamb (not a complete surprise, although I did not know she was carrying three) soon afterwards.  It presented only one leg with its head, so I assisted.  The birth was not entirely calm, because the ewe tried to get away from me while I held onto her lamb, and her escape was only possible as the lamb fell out.

All seemed well as she cleaned up the third lamb, but when it was up and attempting to feed, she began bunting it away from her.  I left them to it for a while to see what would happen.  When it became obvious that the ewe was determined not to feed the lamb, we went and cornered her in the little shed again and helped the lamb find a teat for a good feed of colostrum.  I did the same thing a couple of times later in the evening as well.  I also remembered I'd stored some milk powder in the freezer last year, so was able to mix some of that up to make sure the lamb was warm and comfortable for the night.

A final colostrum feed for the lamb this morning from her mother, before 24 hours had elapsed from her birth, and hopefully that should set her up well enough for a healthy life.  Now I'm her milk provider, every two and a half hours ... 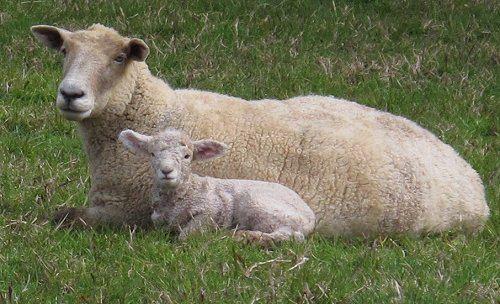 I'm pleased to see Dotty is looking alert and well, considering my interference with her internal spaces during lambing.  It is the practice in large herds to administer prophylactic antibiotics after lambing assistance is given, but in a small flock of quiet animals it is more appropriate to keep an eye on them and treat for infection only if it develops.

Her daughter, beside her, is the lamb I pulled out backwards.  The lamb has appeared a little sore in her rear end, which isn't particularly surprising, considering the force I had to apply to get her out!  Her brother is on the other side of Dotty. 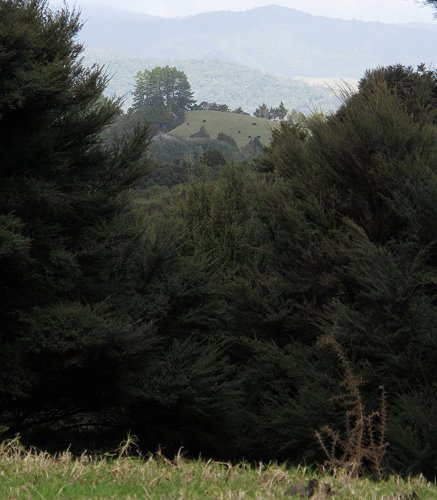 I went out to check the heifers in the Back Barn Paddock.  In the distance I could see the cows on the hill in the Over the Road paddock.  This is the length of the farm.

As I wandered around listening to the Riroriro (Grey Warblers) in the trees, it occurred to me how much I really appreciate my opportunities for solitude.  In an increasingly populated world, solitude in open spaces will probably become as scarce as water.  Here we have both. 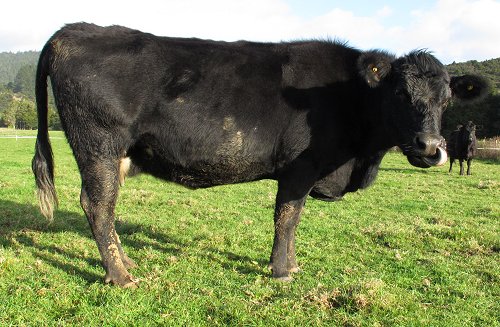 545 is generally a reasonably thin cow, but this year, when most of the herd is well-covered, she is as thin as ever.  She also has a fairly well-developed udder, quite a lot sooner than I would expect for her predicted 5 October calving date.  Her mother was white-faced 416, whose fourth pregnancy produced dead twins in 2008.  This is 545's fourth as well and her sire was #26, son of Irene, who was a twin.  The sire of this pregnancy is Irene 35's son, #89.

Today I had to chair the Annual General Meeting of Kaitaia Veterinary Society Incorporated.  We had a speaker session before the business of the meeting, during which veterinarian and advisor/consultant Trevor Cook addressed us, on the successful development of young heifers.  After the AGM we had a quick director meeting to elect the Chair of the Board, a position I had decided to relinquish for the time being, there being one too many things in my to-do basket!  The position of Chair of the Board was the one thing I could give up without losing my involvement altogether, as I shall remain a director for at least the remainder of my current three-year term.

I must be satisfying the appetites of the cows in Flat 1.  I moved their tape to provide the next section of the paddock, and they just stood and watched.  When they're hungry, they can hardly wait to start eating!  They are 517, Athena 72 and 479. 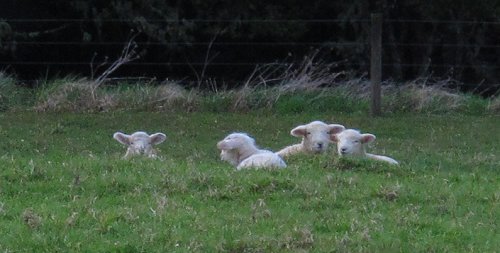 Looking back across to the House Paddock, I could see four little white heads.  It's fun to watch the lambs when they start interacting with each other, rather than staying only with their mothers. 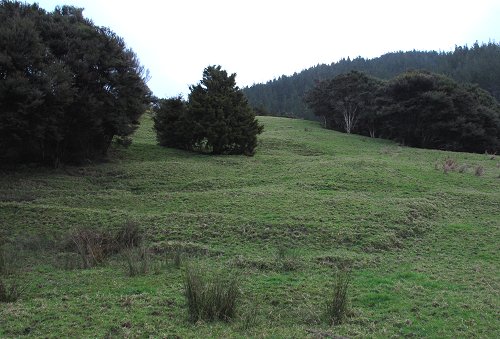 This is the bottom of a slip in the Back Barn paddock.  At the top the soil has dropped by about a foot or 300 mm.  Here at the bottom, it is bulging.  There is water seeping out off to the left of the photo, so presumably that's causing the movement. 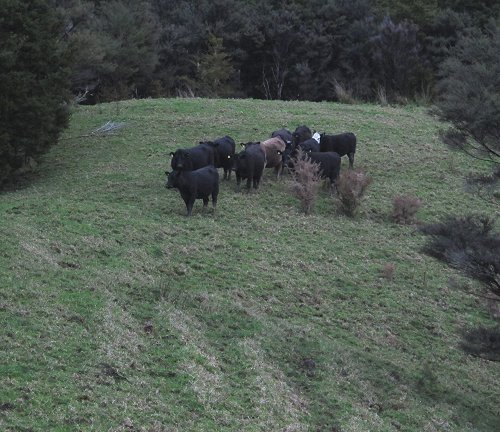 I had gone to the Back Barn to check on the 16 heifers and could hear #86 yelling from somewhere, but didn't find them for ages.  They gradually made their way toward my calls, but weren't terribly keen to follow me down the hill.  When they did gallop down the hill, I let them out into the Swamp paddock.  I start moving them around quite quickly at this time of the year, when the grass has started to grow a bit faster and the pregnant heifers need to be kept in good feed. 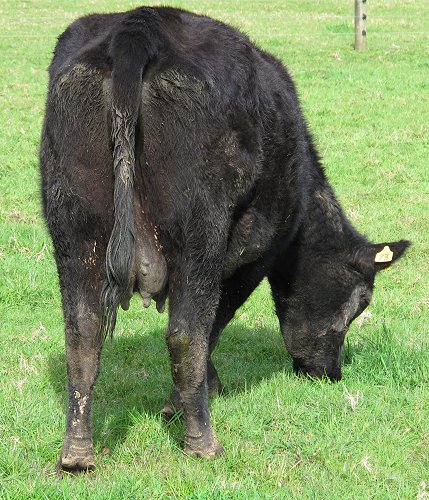 Old Ivy's daughter, Ivy 73, informally known as the Squiglet or Squiggles.  She was born small, underfed during calf-hood by her ancient mother, weaned early by her mother's death and remained a year behind her peers in development.  Now, as a R4 heifer/cow she's pregnant for the second time and she's hellishly thin.  I've wondered about twins, but she may just be unable to cope with the normal extra load of pregnancy.  I keep her because she is of Ivy's line, combined with Irene's pedigree through bull #26. 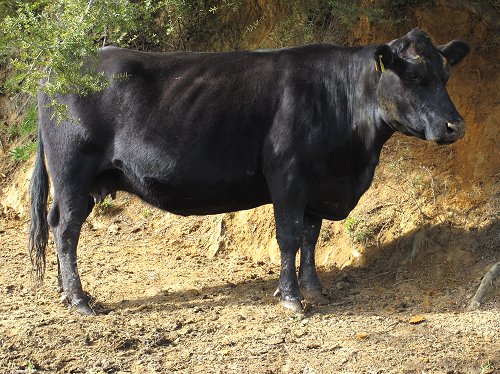 475, my "monitor cow" for herd body condition.  She's lost a bit of weight in the last few weeks, but not to a worrying extent.  You can definitely see where her ribs and hip bones are, but they're still buried under a layer of fat. 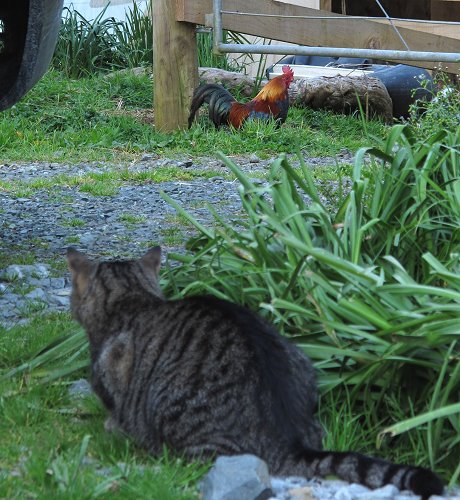 The little Bantam Rooster escaped from one of the hen cages and Finan decided he looked like dinner, except that when he gets too close, the rooster turns on him, so he gives up. 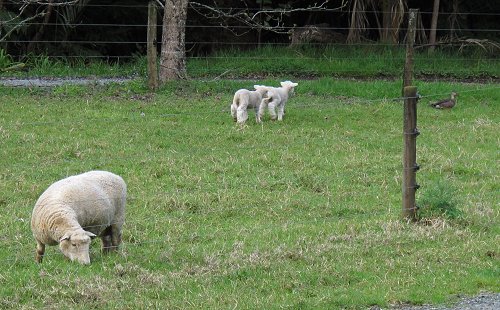 Poor little rejected ewe lamb: every time she goes near her mother, the ewe knocks her away; so when a couple of likely looking ducks waddled through the little paddock, she looked to them as possible replacements!

For some reason, one of the books I most keenly remember from my childhood was "Are you my Mother?", about a bird which hatches from an egg and falls out of its nest while its mother isn't there.  Trying to find its way home, it wonders if everyone it meets on the way is its mother, including a large digger (machine) which kindly replaces it in the correct nest before its mother even knows it was absent.

The other book was "The Big Red Rock Eater", which was actually called "Book of Riddles". 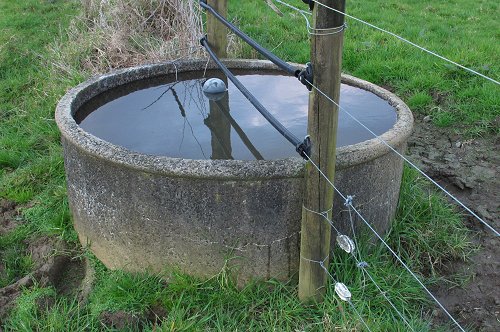 This concrete trough at the top of Flat 1 has been leaking for a few weeks.  Stephan emptied it - or rather tied up the ball-cock valve so it stopped filling and it emptied itself via the leak.  The other day he did some cement plastering around the bottom on the inside because that's where he thought the water was leaking from.  He may have been right, but now the weather is drier, it's obvious it's also leaks through that crack around the middle.