The week beginning the 1st of January 2011.
Saturday the 1st

My brother and sister-in-law, Bob and Shirley, came to visit and stay for a night.  We had a lovely time together, eating, talking and walking. 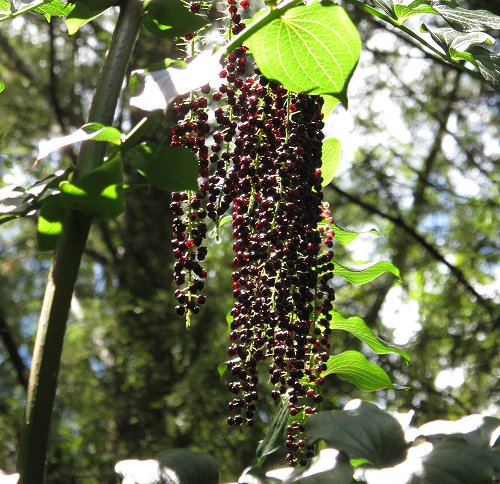 This is Tutu and having not looked very closely before, I thought the crimson things were berries: they're actually the Tutu flowers and they're exquisite.

We were walking in the Bush Flat Reserve area and spotted the flowers of the young tree hanging over the stream. 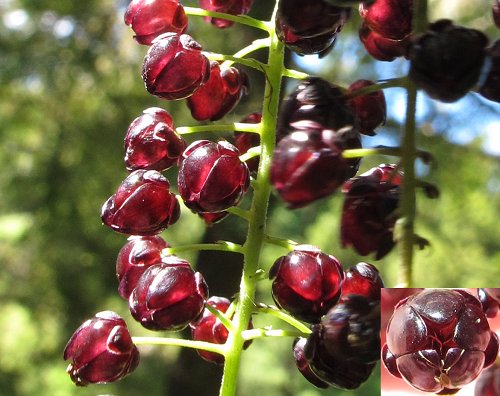 Tutu is the dreadfully poisonous native plant which grows along most of our streams and is now growing in profusion in the Bush Flat reserve where the seeds have come down the stream and where the cattle no longer have access.  While eating Tutu will sometimes kill, our cattle have obviously browsed it for years - evidenced by the number of plants now growing where the cattle must previously have eaten them. 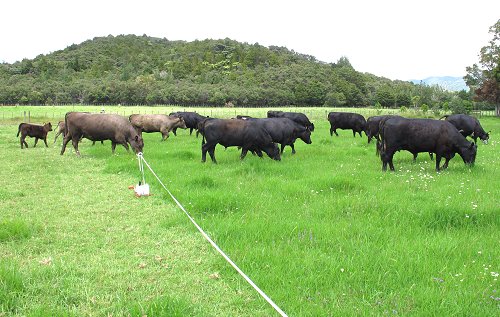 Moving 89's mob from the last of the long grass, into the rest of the Windmill Paddock, where the previously grazed grass has been growing very nicely as well. 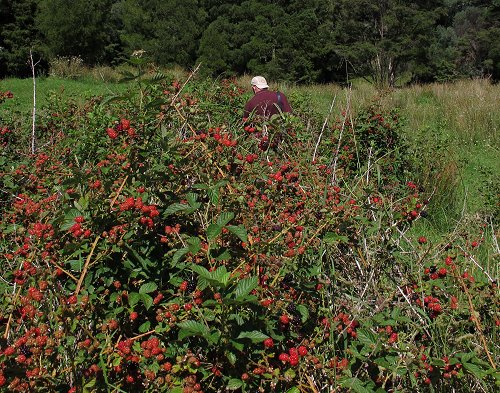 The four of us went out to pick blackberries this morning, before it got too hot.  The crop this year is huge and the berries are enormous and sweet.  The red ones are very obvious in the picture, but there are large numbers of black ones hanging amongst them, often in bunches, all ready for picking and eating!

Picking them is a painful job, but if one eats enough of them along the way, one is prompted to carry on, despite the thorns and scratches.  Peaceful picking is regularly interrupted by loud cries of OW!

Shirley and Bob left us in the afternoon, to return to the end of their holiday in the Hokianga before going back to work in Auckland. 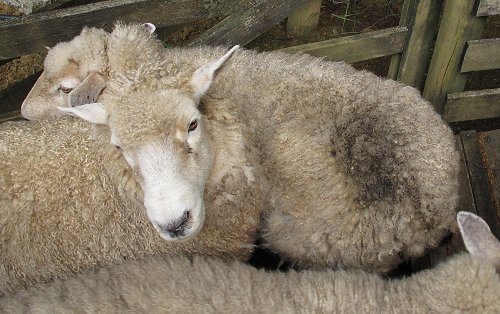 The sheep have finally dried out and they need shearing urgently because there are two obvious cases of flystrike.  This ewe has strike on her rump and Yvette has a lot of maggots in the same place, which we had to treat with insecticide powder a couple of days ago, when her wool was still wet.

Dirty patches on sheep wool should always be investigated, particularly in warm weather, in case the cause is a lot of live maggots underneath. 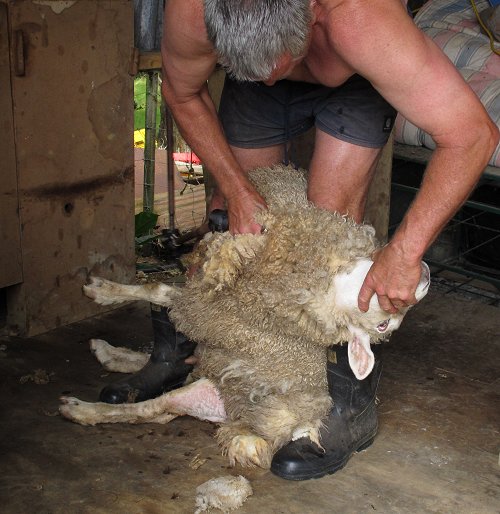 Shearing always looks like such a dangerous activity for the sheep, but the animals, if held correctly, are generally quite relaxed.  A good shearer is entirely accustomed to the shape of the body under the wool and it is uncommon for the skin to be cut. 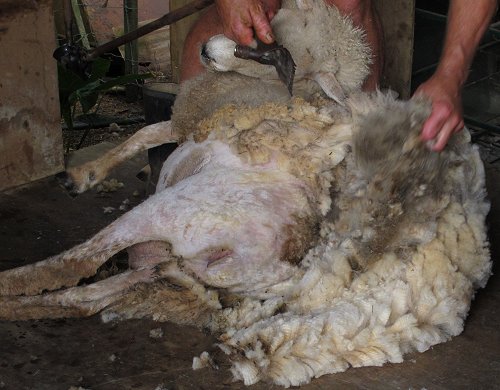 This is the flystruck ewe shown in the first photo.  The dark area was wet and infested with maggots.  Fortunately we got to her in time, before the maggots began chewing through her skin. 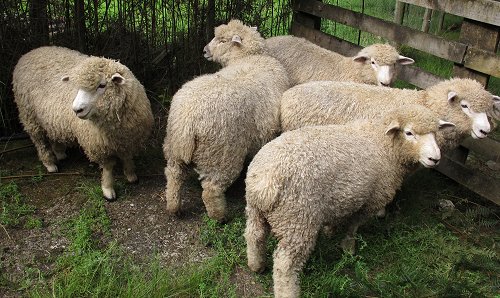 These are the lambs before their first shear.  They grow so fast! 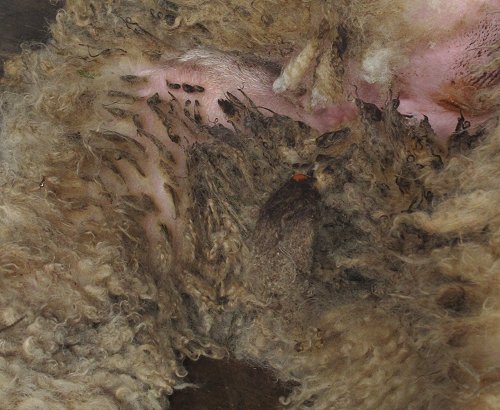 In the centre of this picture you may be able to see the orange castration ring, above what remains of the desiccated scrotum of this lamb.  The scrotum and ring are still there only because the ring is tangled in wool. 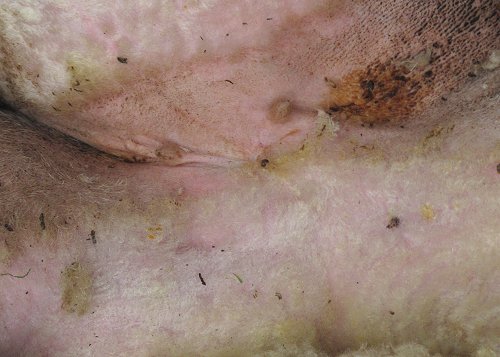 When the wool is shorn, all that remains is a tiny scar - there's a tiny bit of dark something on the bit of wool right where the scar is, but you can see how the skin is slightly gathered to that point.  The castration ring must always be applied so that the teats are not gathered in with the scrotum.

I didn't mean to take a picture when half the ewes were urinating, but it's the only one I have of the small mob entering the House paddock after shearing.  Sheep are obviously prone to suggestion.

We separated the big wether and the ram from the flock again, hopefully before any of the ewes have begun to be fertile, which should happen in the next few weeks as the daylight hours begin to shorten again. 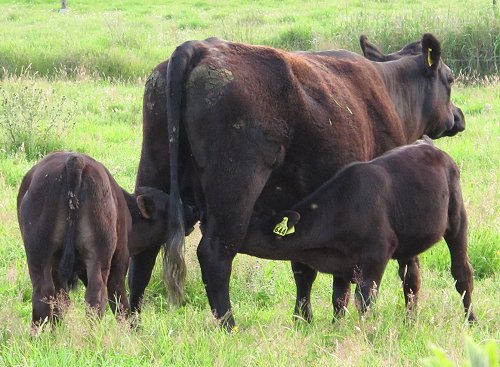 The twins.  Their mother is obviously having to work pretty hard to feed them, judging by her ongoing thinness.  But she is healthy and they're getting enough milk, so she's doing ok, especially since this is her first lactation.  With twins, I'm glad she was three and not a two year old at first calving.

Poor Irene has been limping for the last day or two and I spotted a bit of pink when I was able to look at her clean foot at one point.  I suspect some of her soft flesh has overgrown and is pushing out through the cut-away area of her hoof, causing pain whenever she puts weight on it. 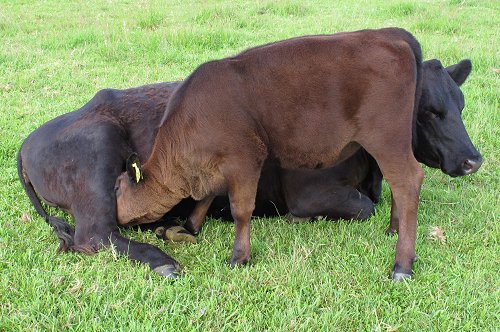 Luckily her daughter knows where to get a feed even when her mother won't get up!  Writing this, I was reminded of a very similar picture I took some time ago: it turns out Irene's calves are regular practioners of this feeding style.

They've been in Flat 1 with bull 87, and the new grass is getting further and further away from the water and shade, with every move of the electric tape.  To save Irene having to walk so far, we put her onto the river bank in a little fenced area usually reserved for Imagen, where there's a small trough, good shade, and ample fresh grass.

There is no evidence of further foot infection, so I will treat her with a course of Arnica (homeopathic remedy) and see what happens. 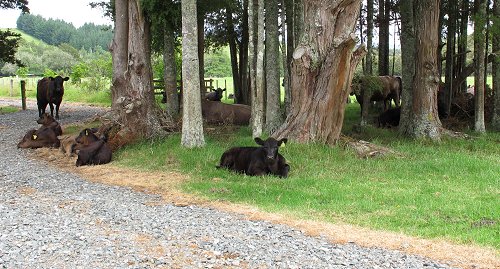 The provision of shade for the animals is vital this summer, with hotter than normal air temperatures and periods of high humidity.  The Flat 5 (a, b, c and d) paddocks have little shade in them, so while the cows grazed 5c and 5d, I kept the gate open out into the top of the lane, so they could come out and cool down under the trees if they wished to. 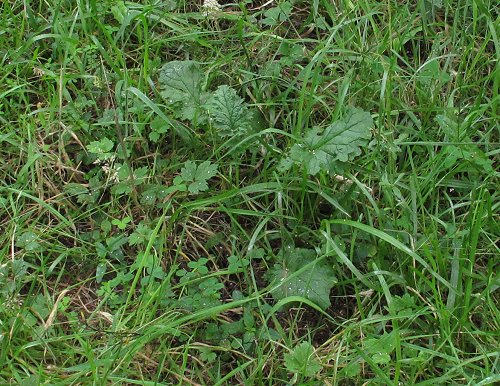 I think we're winning the ragwort battle.  There is far less of it around this year, so that stooping to pull out a tiny plant like this is well worth while, it being the only one in the vicinity, rather than one of a huge population which probably could be better sprayed. 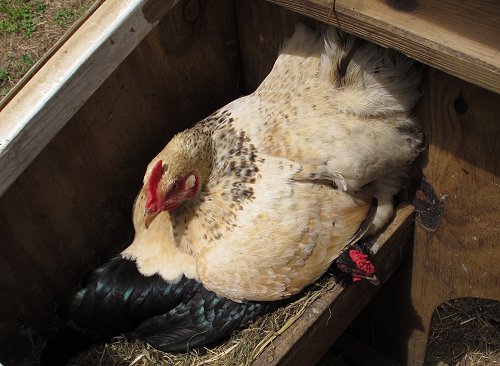 Feeding the chickens today I opened the egg box and found these two.  It's not as though there's no room for them side-by-side. 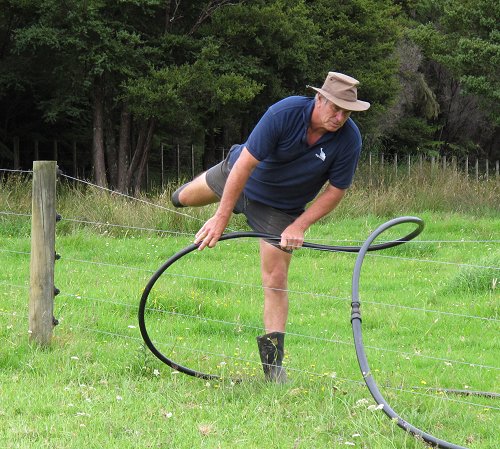 There are all sorts of ways of getting over an electric fence.

Stephan came to help me chase three confused heifers down the fenceline between 5c and 5d, to the gate so they could join the others in their move to Mushroom 1.  Cattle will often walk along a fence to accompany their herdmates, rather than following them through a gateway in an orderly fashion.  The three were two-year-olds and ought really to know better! 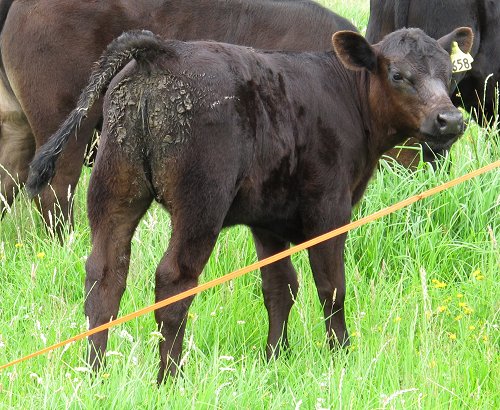 602's heifer calf, now drying out around her rear.  While she looks pretty dirty, she is much improved from the dark wet look she's had over the last few days.  The dry flaky look means no new wet material is being deposited, so her scouring must have stopped. 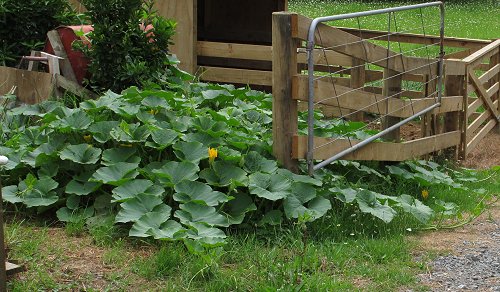 There was a compost pile here and out of it grew this fabulous pumpkin plant, which periodically escapes across the driveway and needs to be driven back. 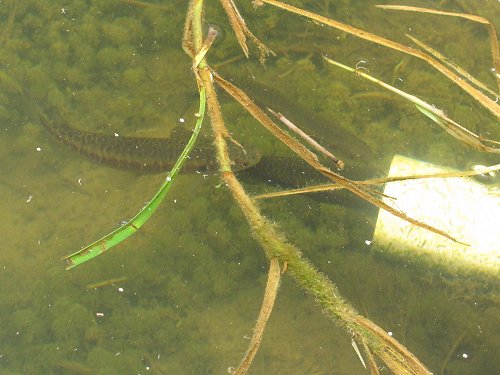 Stephan was lying down on the couch under the shade rotunda and it being so very hot, I decided to join him for a while with a book.

When I looked into the pond, I spotted movement out of the end of the piece of downpipe from which water runs into the pond.  I thought we rarely saw the fish during the day because they're nocturnal, but I wonder if we don't see them because they spend all their time up this pipe, where the water is cool, running and aerated?

Unfortunately, having removed my shirt because of the extreme heat, I then didn't notice that I was actually out of the shade while taking fish photos and got horribly burnt.  Sunburn is not something I "do" since the Melanoma incident.  I was, according to the photo file time prints, in the sun from 2.46 until 3.02pm, only 16 minutes, and I was burnt so badly that my back was red and painful for three days.  Careless and stupid. 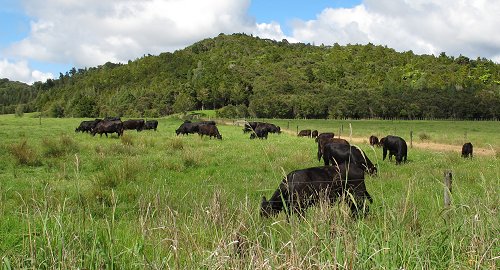 Bull 90's mob have taken a week to work their way up Flat 2.  Break feeding is great, making a paddock last much longer than if the cows get the whole lot all at once.