The week beginning the 8th of January 2011.
Saturday the 8th 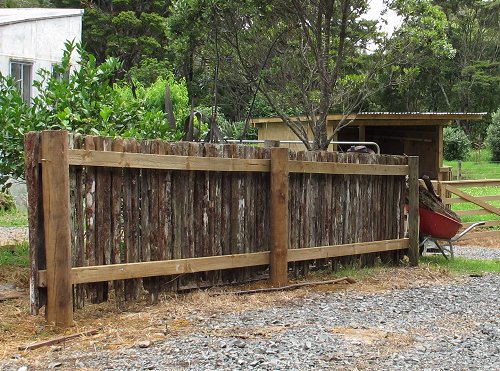 Stephan's been doing some remodelling around the garden: this is a bit of fence which was only electric wire and posts before.  The Totara battens came from many of the old fences we have renovated over the last few years.  We like the effect (this is the back side, facing the farm track).

We now have a long gate which latches at this end of the batten fence, or shuts across the lane, leaving room for a small vehicle to drive around from the driveway, rather than having to back down the slope.

The Whakaangi Landcare Trust held its AGM this afternoon, which Stephan attended, being one of the contracted trappers. 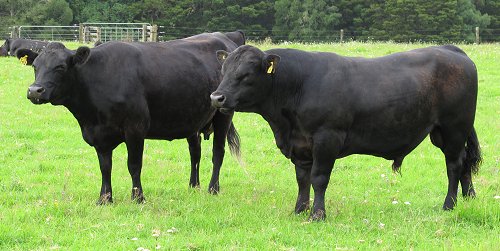 Courting.  I wonder what his pick-up lines are like?  I wonder if they think anything at all while standing around together for hours?

561 was coming on heat, but was not ready for the bull's close attention until later in the day.

I found this on the ground as I was preparing to move the cattle: a dead scrotum from one of the calves.  I was surprised by the size of the bit of skin which seems to have come away from the calf above the castration ring.

Michael and Anne and family came up from Whangarei for a camping holiday.  It's lovely for us when people take our invitation to come and enjoy this place seriously!

This is odd.  At first I thought 89 had worn himself out with too much enthusiastic mating activity.  Sometimes cattle will lie flat out like this, but generally not for long: they can't burp their rumen gas so it is not a very comfortable position.  I suspected that he was not feeling very well. 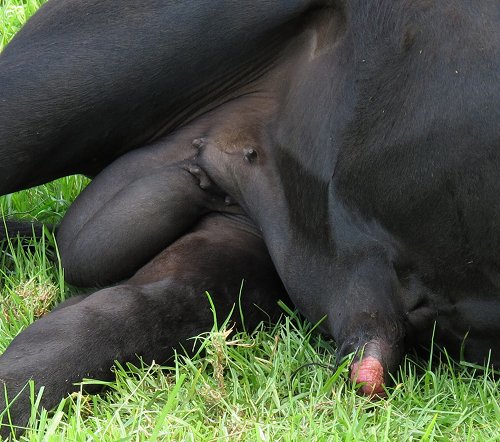 A closer look revealed that all was not well.  There was a lot of swelling up the sheath of his penis, and it looked as if it may even extend into the udder area (you can see his teats - "as useless as teats on a bull"). 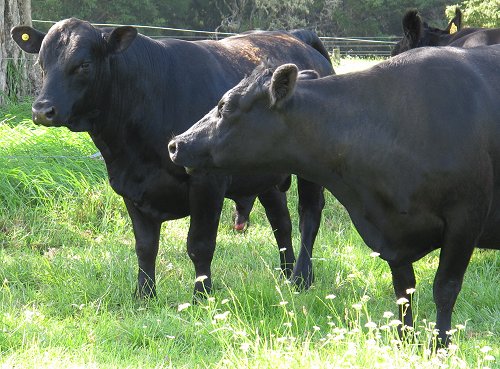 When he got up, he looked alright, but the swelling was still obvious and while he showed some sign of wanting to do what he was supposed to with an on-heat cow, he lacked either the enthusiasm or ability. 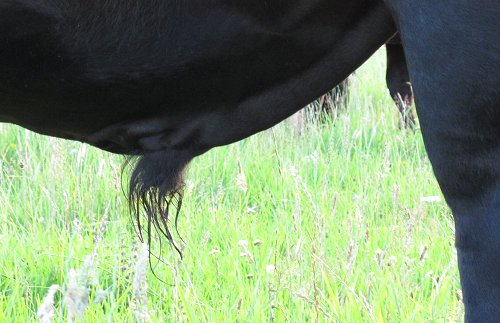 This is one of the other bulls, for comparison.

Michael, Stephan and I went and moved 89 and his cows out of the paddock, drafted 89 and a cow and calf for company off to the side, then sent the others down the lane and into the top of Flat 1 to join 87 and his little mob. 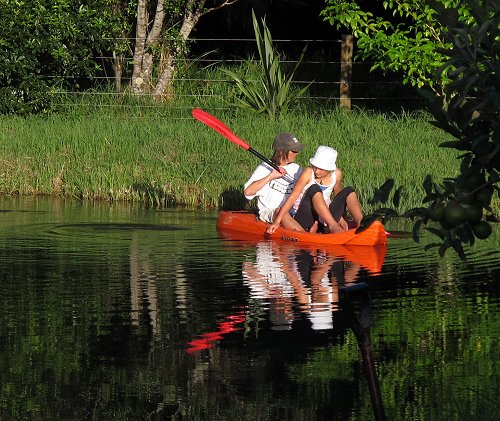 Back at home the sunny evening was being enjoyed by our guests on the pond. 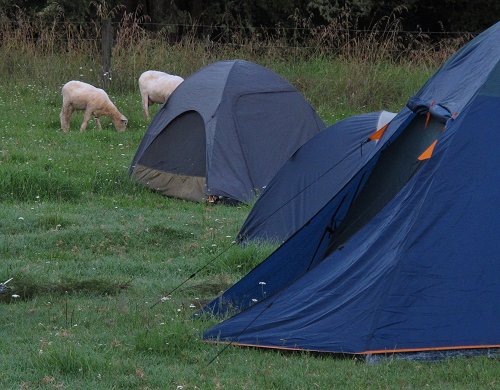 Sheep at dawn, grazing around the tents in the House Paddock. 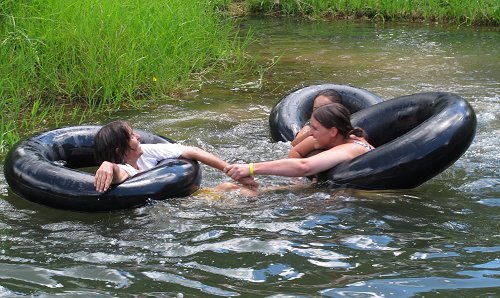 This was near the end of a race around the island with some shockingly unsporting behaviour demonstated by some of the mature contestants! 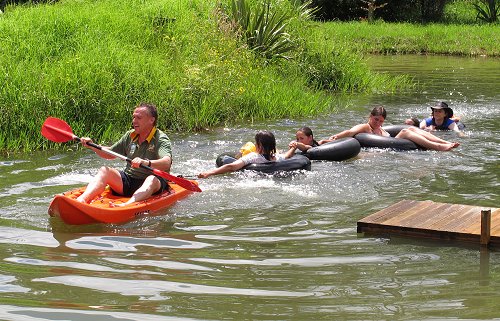 Michael then dragged the entire party around the island.  It looked like hard work! 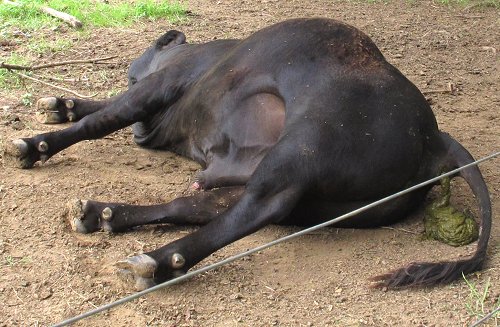 This bull is really not well.  I suspect he has probably bent and traumatised his penis, and an infection has presumably set in, which has raised his temperature so that he's feeling weak and horrible.

I consulted the vets and will give him a course of penicillin for the next three days, which should take care of the infection.  The swelling is quite general and I have watched to see that the bull can urinate, so I'm not too worried about him.  But his future will not be a long one. 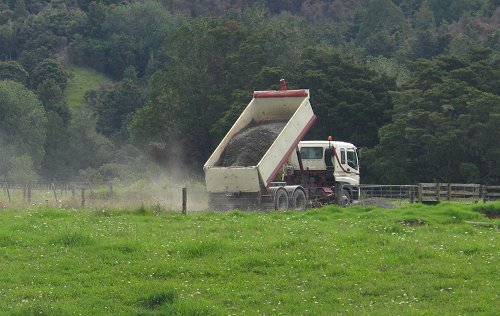 Imagen was limping on a sore foot yesterday and thinking about it this morning, I decided that is the last straw!  I rang up Bellingham Quarries and asked if they could bring limerock to overlay the Blue Stone they mistakenly brought us last year.  Too many cows have hurt feet.

Had I been inseminating cows as usual this season, the problem would have become more urgently obvious sooner than this, but with everything closed down over the holidays, I'd not have been able to do anything until today.

We would not have needed to re-metal these tracks again this year - or even for the next two or three, except for some patching - so this is quite frustrating.  We'll have road surfaces to rival those of the District Council!  They undulate, but there won't be as many pot-holes as there are out on the public roads. 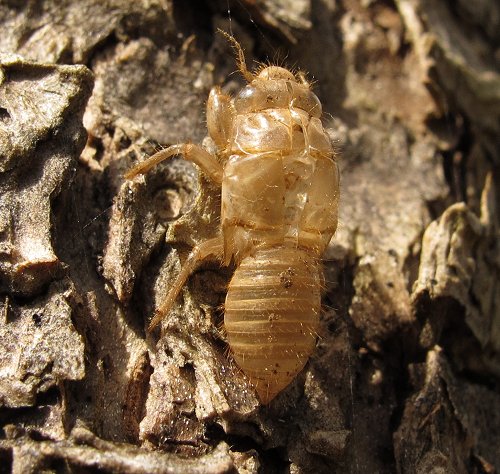 Since the rain came, there are Cicada cases on trees and fenceposts all around the farm.  It must have been too dry for them to complete their metamorphosis or to emerge from the ground before now.

A pretty little lichen growing on the underside of one of the branches of the fallen Puriri. 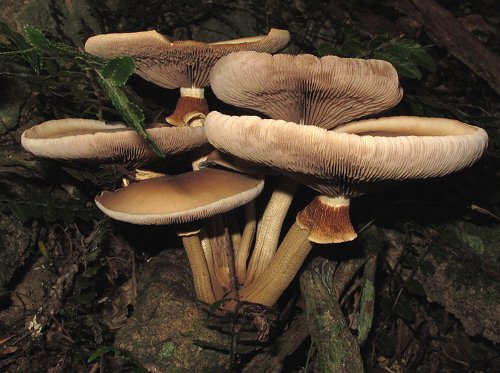 I attempted an identification of these fungi, but failed to find a picture which quite matches.  I took the photo because they looked pretty, so here it is, a pretty picture. 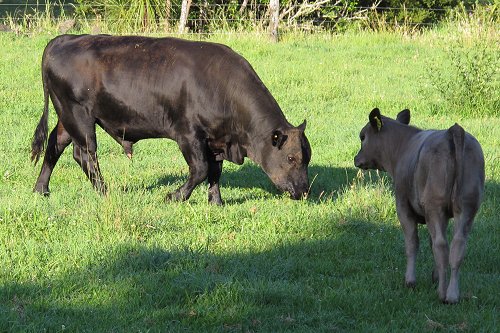 89 is up and about and has stopped lying flat out on the ground, so I presume he's feeling better.  Getting him in to give him his penicillin injection is fortunately not too hard a job - he still gives me the willies with his habit of trotting over to me growling, but if I'm behind him and he knows I want him to move, he goes where I direct him.  Stephan and I gave him a good scratching in the race yesterday afternoon and he obviously absolutely loved it.  Today he comes to the fence even more enthusiastically.

Having treated Irene 35 with Arnica for several days, I am extremely pleased to note that she's now walking almost normally again.  It was suggested that we'd need to get a vet to operate again to remove the proud flesh which was growing out of the cut-away part of her hoof.  I'm very glad the problem is resolving itself.

During the summer there are often Shining Cuckoo (Pipiwharauroa) babies in the Puriri outside our house.  Today I could hear more than one peeping bird and it looked very much like there might have been two chicks being fed by one set of parents.  It is a very good season for birds, so I wonder if they do sometimes rear two at once? 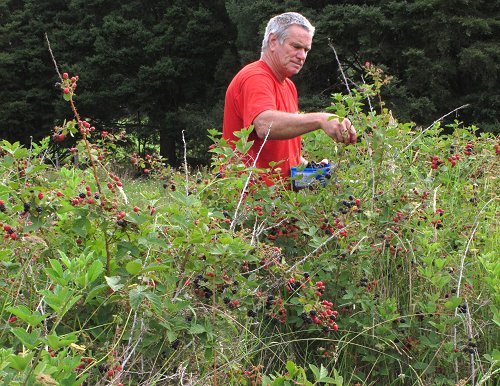 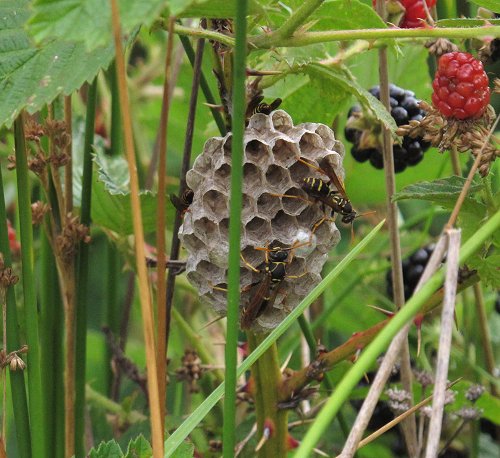 There are two significant hazards in this job, one being the obvious peril of getting pierced by those extremely sharp backward-facing thorns, and the other is being stung by wasps protecting their nests, if you don't see them before they see you! 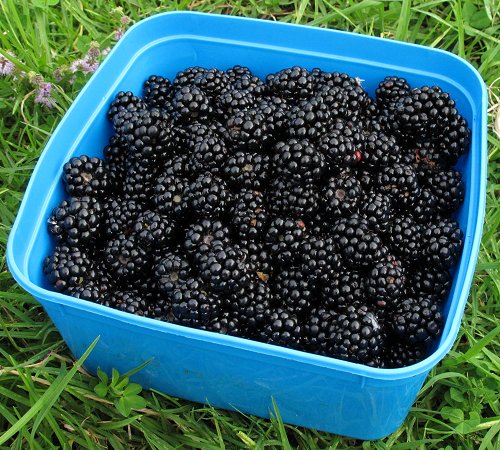 The berries are fabulous.  They're big, sweet, very tasty and so abundant they're a snitch to snatch. 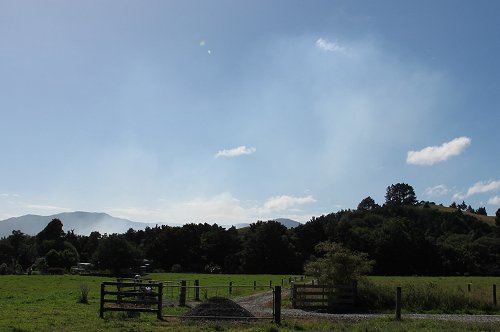 This summer is as hot as I thought it might turn out to be!

While out opening gates and setting things up for the metal truck, I looked back to the hills and noticed a lot of what I presume is lime dust floating up into the sky.  The air is very warm today and with little wind the dust is being carried straight up. 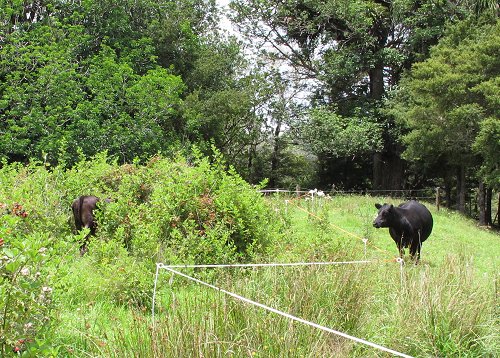 I put the cattle into the Camp Paddock yesterday, but not before I surrounded the blackberry patch with electric tape, to stop the calves from getting in and eating them all.  This morning there was a calf inside the tape and I promptly chased him back out. 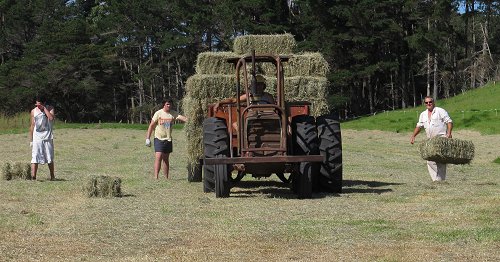 We headed up to Paparore this afternoon so Stephan could help pick up hay.  Usually it rains on Kees's hay.

There wasn't a huge lot of it, and there were three young chaps there to help as well, so the job didn't take very long.

We stayed for drinks and a fabulous curry dinner.  It has been nice this summer, to have a bit more flexibility to go out and be sociable, rather than being tied to watching cattle to ensure good insemination timing.