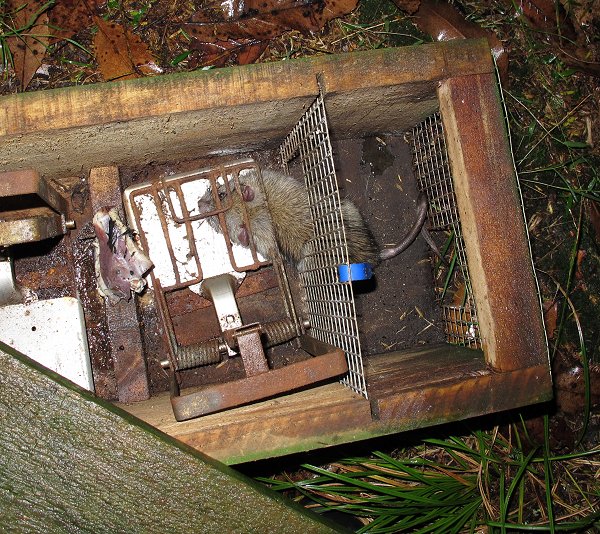 I often have a nosey in Stephan's trap in the Bush Flat reserve as I pass, to see if anything's been caught.  Today, a fairly fresh rat.

This is a DOC 200 trap - note the offset holes in the mesh sections, to exclude inquisitive or hungry Kiwi.

I haven't learnt to clear and reset the traps, so I just take photos and leave them as I found them. 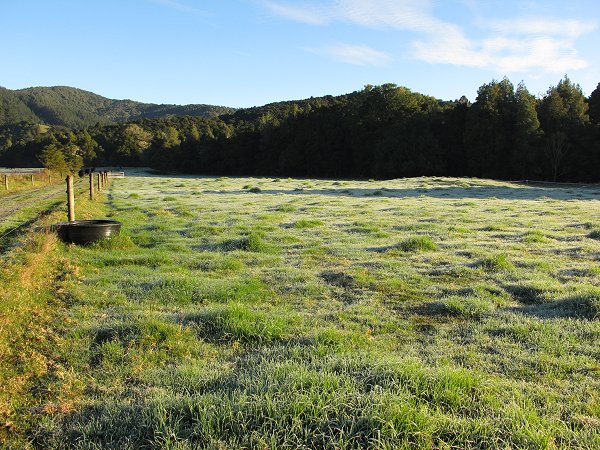 Our second frost of the winter, this morning, this time a fairly heavy one (the first, a light one, on Sunday two weeks ago).  There were even frozen droplets hanging on the steel gates!  This will knock the Kikuyu out of the pastures.  I'm very glad there's rye grass coming up. 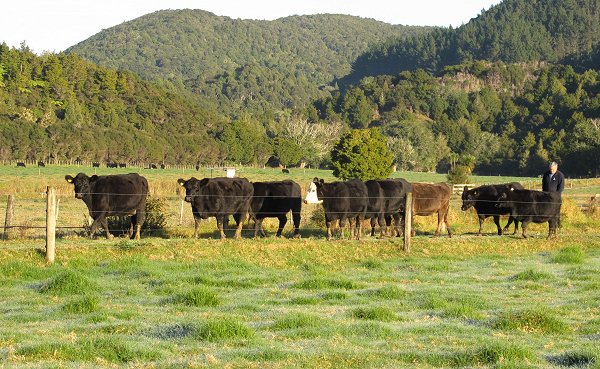 Stephan went fishing all day yesterday (didn't catch anything, but had a nice time) so the heifers had to wait until today to go over the road onto the hill.

Squiggles is at the front, followed by 571, the strangely thin four year old mother of lovely heifer 710.  I'm not sure why 571 is always thin; I don't think disease is likely.  The year of her birth wasn't particularly hard, but her first year was blighted by the awful winter of 2008, during which she perhaps suffered more than I realised.  Her calves are so far very good, so I'll let her have some help this winter (these heifers will have more feed than the cows) and see how she looks next season. 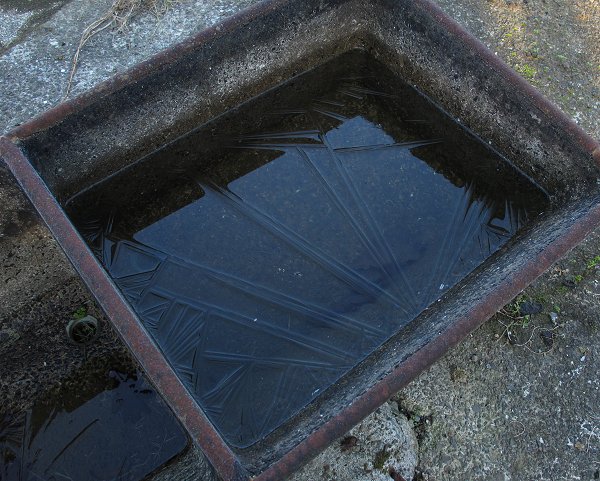 The yards were still in the shade after we'd put the heifers across the road and I was surprised to see ice on top of the makeshift water-trough.  It rarely gets cold enough here for this to happen. 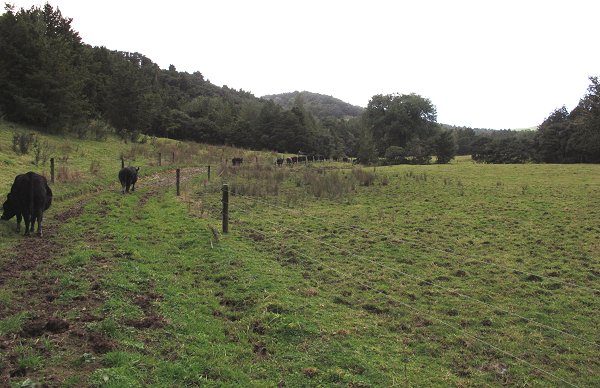 Yuck, winter.  The skies have been grey and everything looks bleak.  I called the cows down from the Big Back hillsides and checked they were all present before letting them head off along the lane and around to the PW. 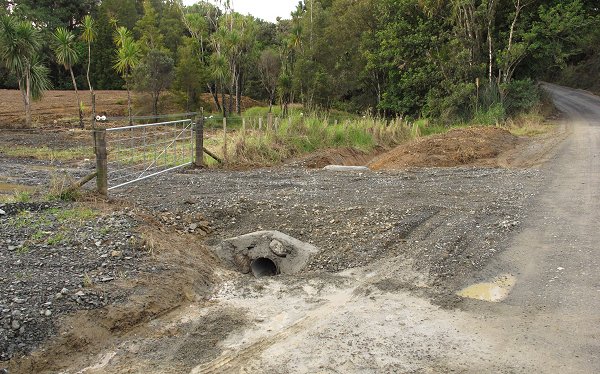 The fencer was back today to batten the fence on the road corner, and he also came along here to fix up the strainer post because its stay had been displaced.  I wasn't sure if he'd been able to do it without his tractor, so came to check - and found that the road culvert crew had also been back to cap the ends of this culvert very tidily. 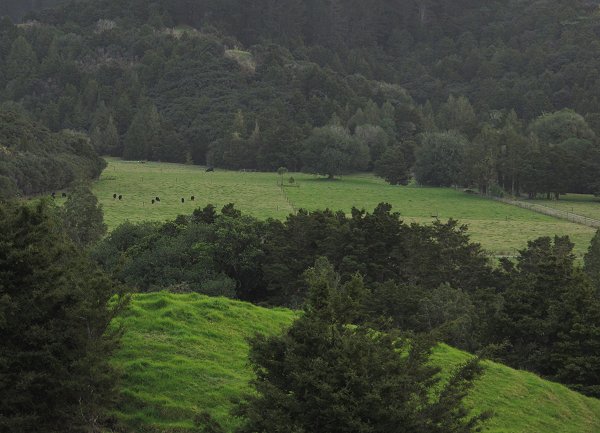 I climbed the hill to check on the nine heifers, finding them all happily grazing or lying in the grass.

Looking back over the rest of the farm the various stages of growth down on the flats were interesting to note: the little heifers are in the middle, left, grazing the new rye grass in 5c, with 5b in front of them where they were three days ago; to the right is 5d, yet ungrazed, and in front of that is 5a, which was well chewed down by the heifers behind me before they came up here. 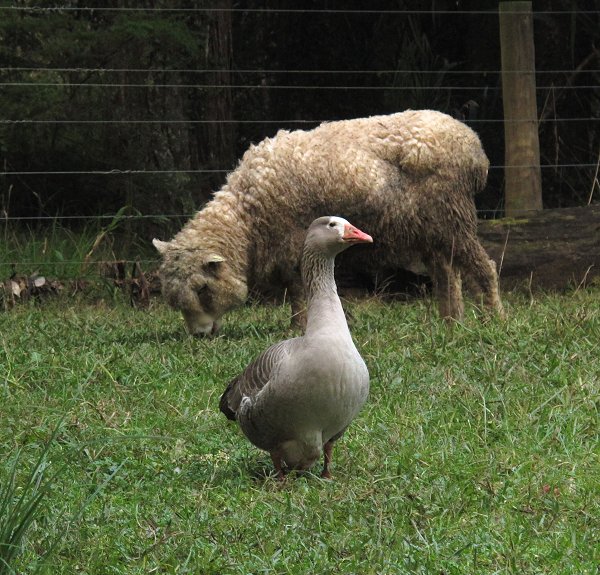 I chased old Madam Goose out of the Chickens paddock to be with the sheep when I heard her honking up there this morning.  She likes sheep.

Old Goose has been here for nine years now.  She just wanders around doing whatever she wants, although she has few poultry companions now, since all the turkeys are gone.  That was why I thought she'd better stay with the sheep.

The sheep are not exactly high-class company, all looking scruffy, dirty and damp.  Some have wool starting to fall out and they could have done with shearing, had Stephan not been out of action for several weeks.  Now it's probably a bit cold to denude them of their warm coverings.  Other than ancient Yvette (in this picture) they're all in good enough condition, under their untidy wool.

We're not having lambs this year, because the hogget larder is still full - we have a number of young sheep still to eat!

The guy who came to replace my broadband satellite dish came back today with a cage containing four roosters he didn't have the heart to kill.  Stephan had talked about his Kiwi protection trapping work and the need for bait to entice the predators he hunts, and Dave said he might bring us his roosters, so he didn't have to kill them himself.  We gladly accept such contributions.

I have a premature case of the winter blues - although it's probably more to do with a year's worth of stress compounded by family deaths and far too much to sadden me lately.  Depression and I were once regular companions, but we've fortunately been estranged for some years.  I'm keen to keep that old acquaintance at more than arm's length.  I know how much value there is in physical activity, so I take myself up hills and out walking regularly - and a good bit of cow grooming would probably do me a lot of good too.

We had a visit today from a guy we met at the Takakuri field day a couple of months ago.  We invited him in, had a cuppa, talked for a while and as he was getting ready to leave, he mentioned that he'd not shut the front gate. We looked at him in horror and asked him why he thought the sheep wouldn't walk out onto the road?

He jumped into his vehicle and roared out to the gate and by the time I got there, he'd chased the escapees back along the road and in the gateway again, no harm done - except perhaps to his heart, since he looked rather like he might keel over after the fright and sudden activity!

He said he'd not noticed the sheep as he drove in.  It's one of the primary rules of the country: always leave gates as you find them!  It's sort of funny in retrospect, but it would not have been had someone run into the animals in their vehicle and hurt the sheep or themselves. 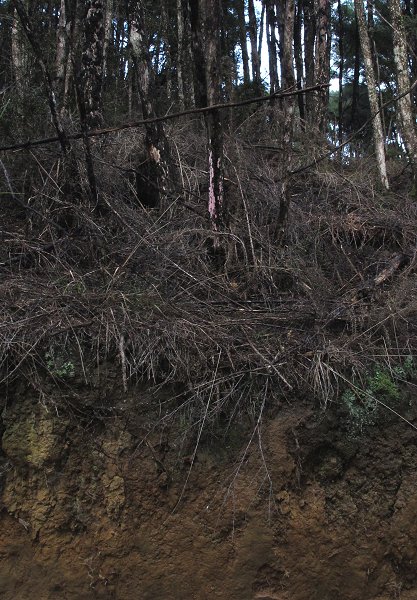 Stephan and I went out the back together this afternoon, he carrying the chainsaw - and no ear-muffs, so he went back home to get them, while I walked along Route 356, checking cows and calling them to come with me up the PW hill.

This strange colour caught my eye: a pink fungus of some sort on the trunk of a Kanuka tree.  I'll have to go back and get another picture on a lighter day. 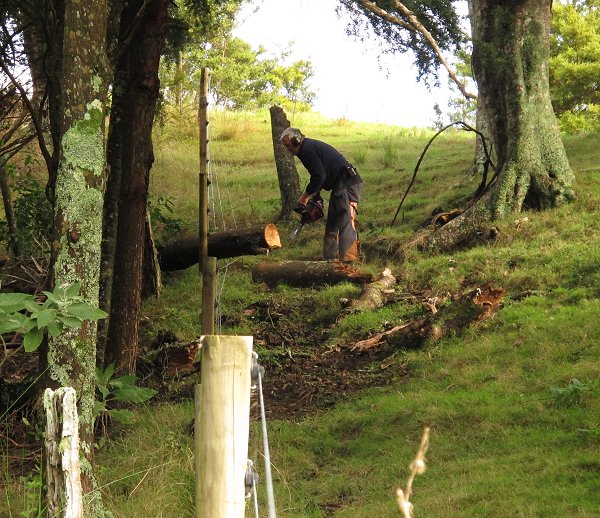 I called the cows from the top of the hill and could hear Stephan trying to get them to move up toward me.  Eventually one appeared, then Stephan, then gradually the others climbed up.  I ticked them off my list and let them through the gate into the Middle Back.

Meanwhile Stephan went up to cut a fallen tree trunk off the fence between the paddock and the reserve area.  I noticed this one had fallen back in April, but had forgotten about it until a few days ago. 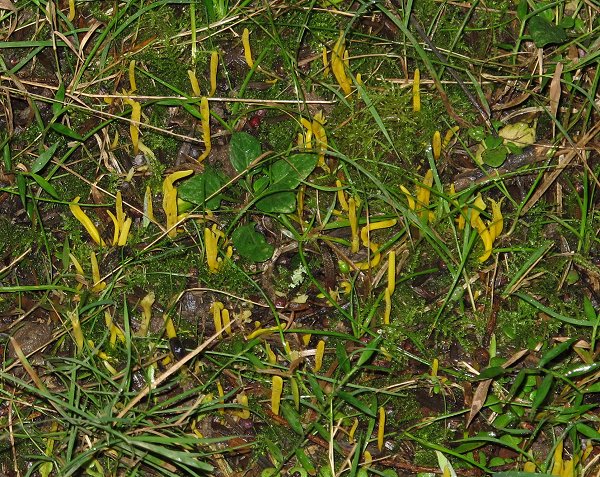 This is a nice thing about winter: loads of pretty and interesting fungi appear in the dampness.