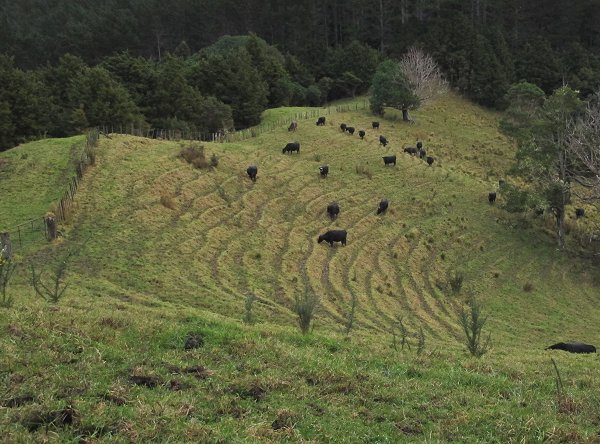 The cows seem quite content in the Middle Back paddock, despite falling feed levels.  It's a sheltered paddock with North-facing slopes, so gets the sun for most of the day and also has quite a bit of shelter, in the shape of large Totara trees. 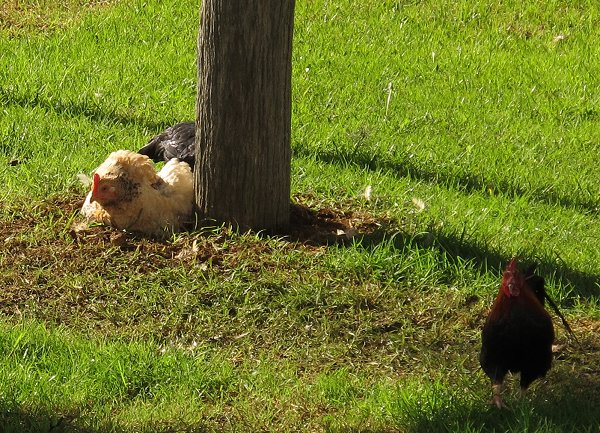 Stephan has been gradually moving the chicken cages from down amongst the trees in the native planting area, to the higher ground, intending to shift them out into the paddock, out of the way of potential winter flood waters.  It would be impossible to move the cages through the fence without losing the hens, so he let them all out for a while and I spotted them having a lovely time in some loose earth around the base of the gazebo centre pole by the pond.  There's rarely any dry earth for this activity in their cages, as they're moved every day for fresh grass. 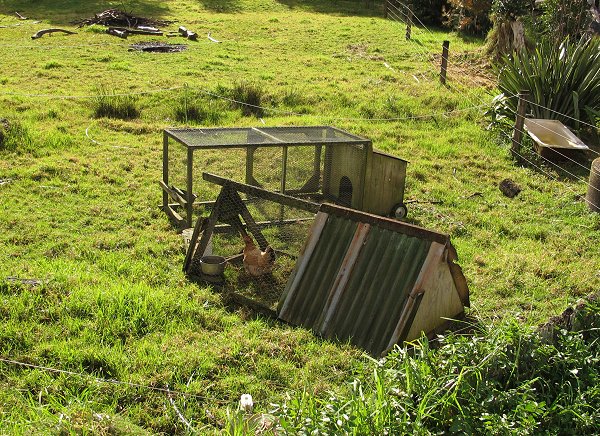 There's quite a slope from the level of the bath (which has gone under water in recent times) and this area just below the garden wall.  It's a sunny, sheltered area, so should be good for the hens.  We keep them caged so they don't come up to the garden and destroy everything.  If they would understand our wishes and stay out in the paddock, they could roam free all day.  Chickens have no foresight. 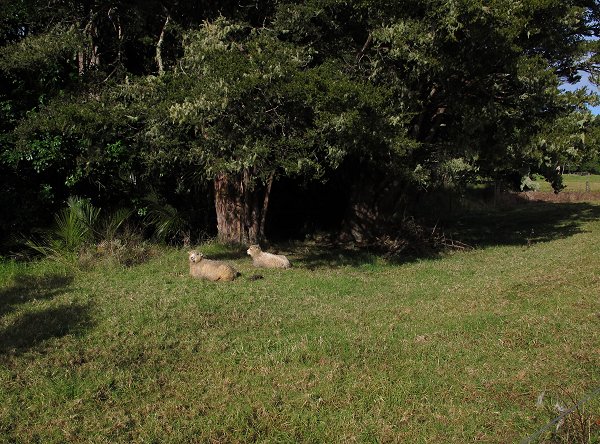 We put all the sheep into this riverbank area a couple of days ago and all but Yvette and her daughter promptly moved out again and headed off up to the (less grassy) Windmill Paddock.  They're a pain in the wotsit! 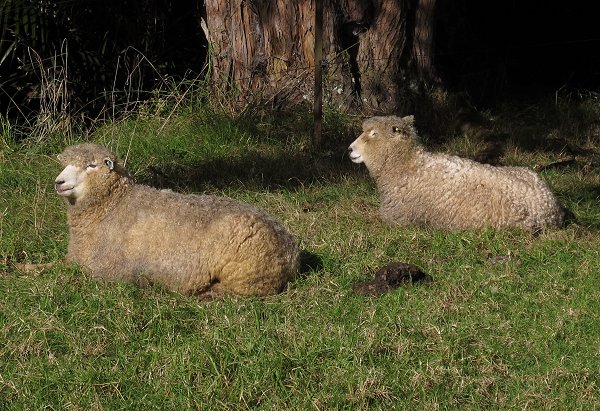 We tagged Yvette's daughter last year as the one replacement ewe from that lamb crop, so I'm pleased to see she will sometimes respect the electric fences. 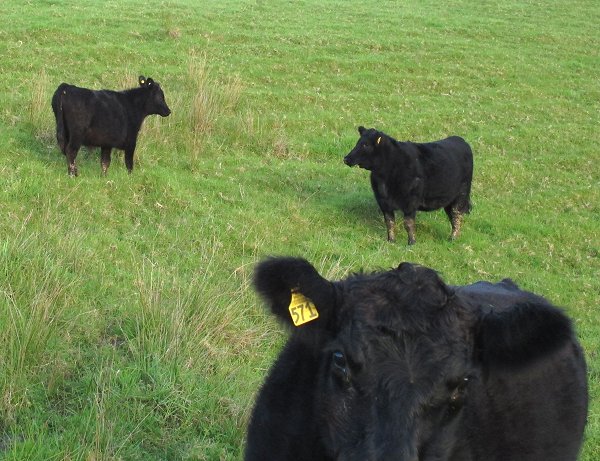 I went for a walk, over the road and up the hill, to inspect the heifers.  Two of them were at the bottom near the gate across the road to our yards and so I was looking for another seven.  Up the top of the hill I counted seven then thought, hang on, one of the seven should be grey!

We have a trespasser and if you've been reading this site for a while, you may imagine how much that discovery upset me.  That animal on the left is a rising yearling steer, of entirely unknown health status and he's in close contact with my pregnant, BVD-naive animals!

I phoned the owner of the property where the animal had come from and requested that he phone the steer's owner and that they be at our gateway at 9.30am tomorrow, ready to take the animal back to where it ought to be - too late this evening to get it out of the paddock. 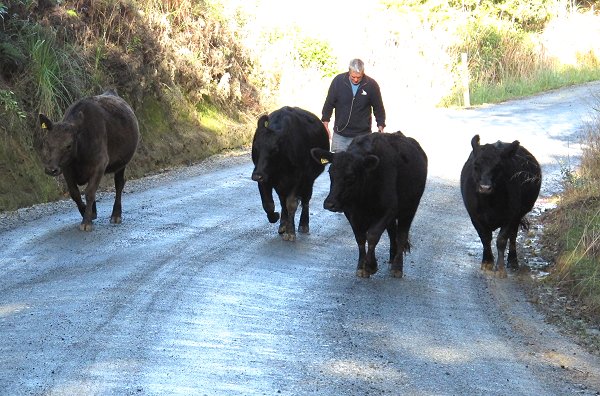 This morning we called the heifers down to the gate, then stood a long way further back on the road than we normally have to, to get the stray animal to come out with the others - it had an extremely large flight-zone, compared with my quiet heifers.

I had considered drafting the steer out and sending it up the road on its own, but I suspect that could have caused all manner of chaos and it might well have headed into the bush on the side of the road and back onto our place, so I eventually realised I'd have to take some of my animals for a walk with it.  I had also considered the possibility of putting it in the race and taking blood from it to check its BVD status, but the damned thing was so jumpy, I thought that wasn't a good move either.

The guy who owned the steer arrived, but stayed in his ute and drove up the road behind Stephan and I as I led four of my animals and the stray.  When we got near the rest of the stray's herd, I drafted it away from my four and Stephan chased it on up the road and into the right driveway.  The heifers stayed standing quietly on the side of the road.  As seems to be the norm in this sort of situation, Stephan and I did all the leg-work, while the people responsible for the animals sat or stood around watching.

Once the trespasser was behind the right gate again, we walked the four back home and put them up into the far part of the hill Over the Road, because I wanted to reduce as much as possible, their exposure to any matter the steer had left behind.

We asked the owner if he knew what the BVD status of his animals was and he said, yep, they're ok.  I pressed him further, and he said he'd had a sick one a couple of years ago, but they'd all tested clear of BVD.  So I asked if he'd bred these animals from the same herd?  No.  So his test two years ago would tell him nothing about the animals in his ownership now, at all.  I can't believe how little most farmers know about this disease, considering how wide-spread it is in Northland - or maybe that's why it is so wide-spread.

The other thing we discovered was that some of the animals had been out on the road in the days before I found this stray in my paddock and nothing had been done to fix the fence through which they'd escaped.  I'd checked our joint boundary and could find nowhere the steer had obviously pushed through or jumped - it's a good post and batten fence, with a hot-wire all the way along our side.  It seems entirely likely that this animal was on the road on its own, and had pushed into our paddock through our road fence.  The fence is entirely adequate to its task of keeping our animals in, but obviously failed to keep this one out.  Animals do get out of where they're supposed to be, from time to time, but when the escape is repeated and nothing is done to prevent its recurrence, I get pretty bloody annoyed; especially when the expense of the outcome falls entirely to me.

Initially I thought I would need to test my heifers to find out whether or not they had contracted BVD from this animal - and I may still need to; I'll have to check with a vet.  But on checking the gestation periods of the heifers in this mob, I find that on 24 June they were from 167 - 183 days from conception, which theoretically puts their calves beyond the danger of being infected and born as Persistently Infected carriers of BVD, which would be my greatest long-term risk.  Until I figure out what I may need to do, I'll monitor the animals closely, watching for any untoward health changes. 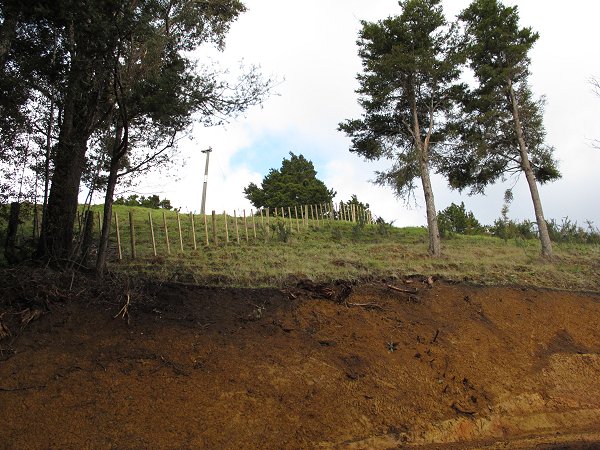 After we'd put the heifers into the new bit of the paddock, I walked around to ensure all was as it should be at the new gateway, and Stephan walked up and over along the new fence, to make sure nothing troublesome had been left lying around which might endanger the cattle.

We put the fence quite a way back from the edge of the corner cutting, because there's a significant risk it'll erode, and I'd rather not have to shift the fence later.  The line we chose also made sense in terms of the slopes on the ground. 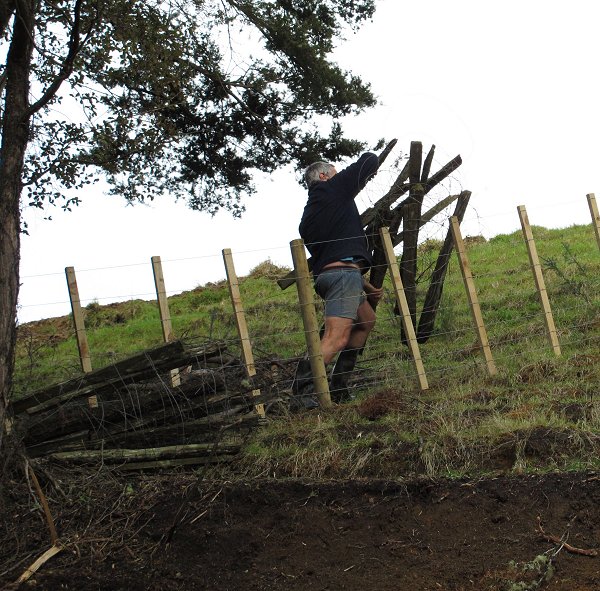 Stephan did find something which shouldn't have been left in the paddock: a rolled up bit of the former fence!  Cattle with wire around their legs are tricky to deal with, so best to remove all such hazards.

Stephan went back again later in the day to reinstall the hot-wire along the inside of the fence, to stop the cattle from pushing through it and to discourage any stray animals from trying to get over it. 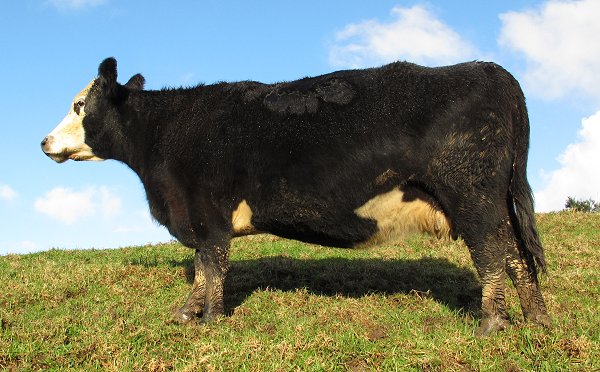 The 30 cows are now in the Back Barn paddock.  This is 517, a hefty individual these days.  She has a two-strike penalty against her so far, but because she reliably gets in calf each year and because I think one of those strikes might be managed, I've kept her.  I theorise that a cow which suffers a Magnesium deficiency at calving (which they probably all do to some extent, although there are no clinical symptoms) might pass some of that stress on to her newborn calf, causing it to be wilder than it would otherwise be.  I've wondered about this possibility ever since this cow's daughter before last was born and then turned into an unmanageable monster.  I don't have adequate notes about my Magnesium supplementation before calving, but I must have earlier recalled that 517 didn't get much before she calved and I have wondered if that was pertinent.  Her previous calf was extremely quiet (601).  The other mark against 517 is regarding her feet: she's had problems, herself, but 601 also had horrid hooves. 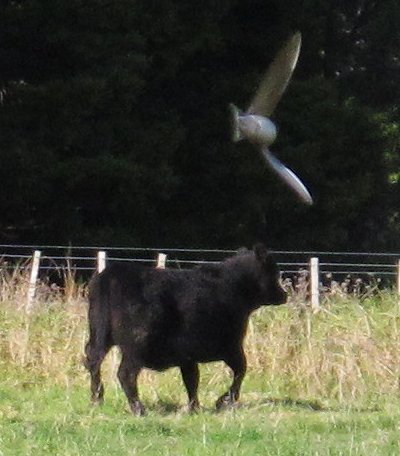 I did not know I had taken a photograph of a bird!

I was taking pictures of the R1 heifers, galloping around Flat 4, running, like naughty school-girls, over to the bad boys on the boundary (the neighbouring lifestyle-block's horrid uncastrated Jersey-cross bulls - the boundary now double fenced so they can't touch each other) and I think this is a Kukupa, or native wood Pigeon, flying past.  I only discovered the extra feature when processing the photos. 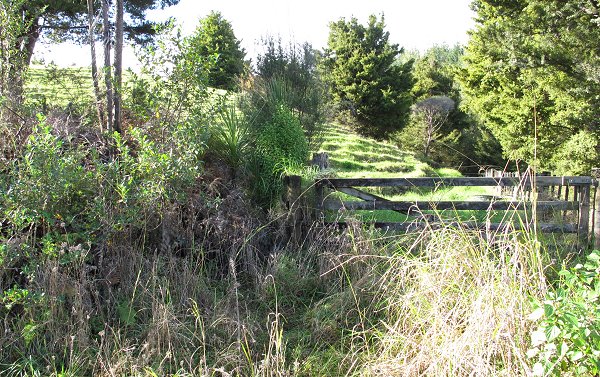 I walked up the road to see if I could see where the trespassing steer had got into our paddock, and it would appear that he'd walked up to the left of this gate, then scrambled over the rails, which are high enough from our side, but not high enough to stop an animal from the outside, getting in.  I had not considered the danger of wandering stock here.  Damn. 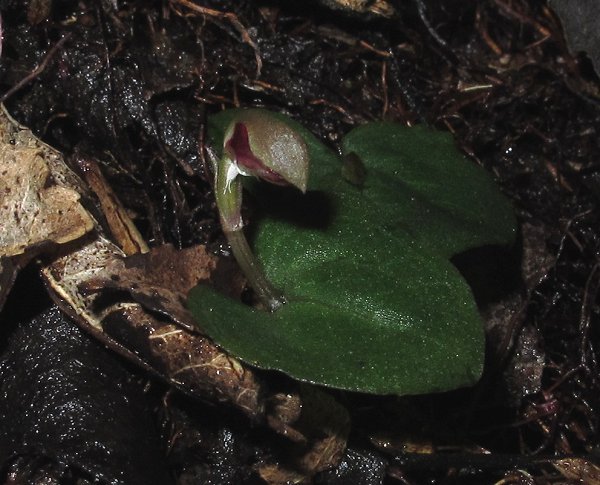 On my way back along the road I inspected the area around the felled Pine tree, finding a number of these orchids in early bloom again. 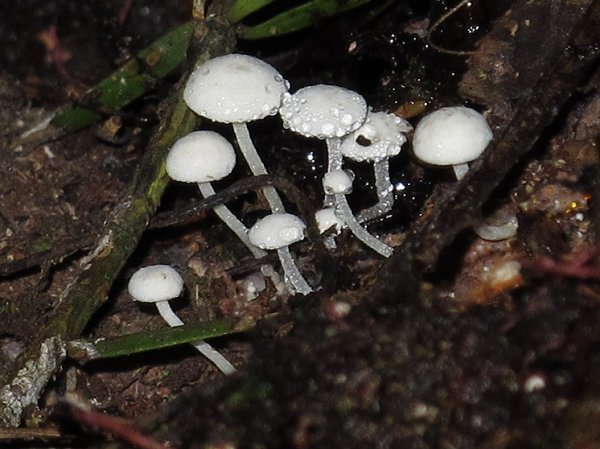 In a crevice under the pine log, these minute toadstools.  So pretty! 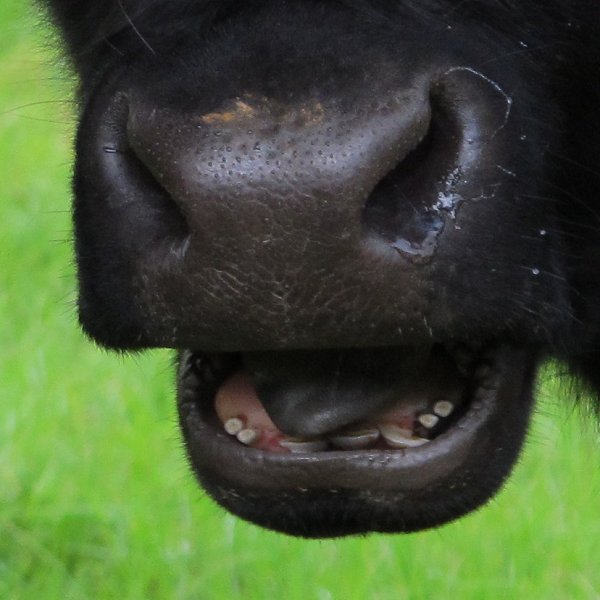 Having not yet calculated the possibly reduced BVD danger to my heifers at this stage, I checked on them every couple of days, looking particularly for signs of abortion or snotty noses.

Emma 93 was standing quietly chewing her cud and seeing some tooth gaps, I took a series of pictures so I could more easily see what was going on in her mouth: her first two incisors are firmly in place, but the next two are still coming up - on her left the third is turning into line, but on her right, the deciduous milk tooth has gone, leaving a gap the permanent tooth has not yet erupted to fill.  They have eight incisors. 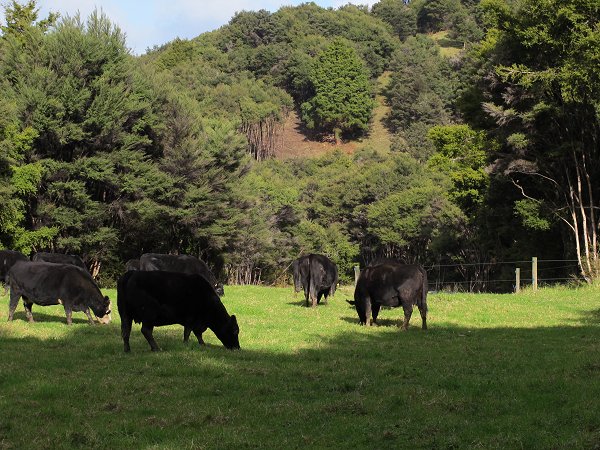 Graham, who has been coming in to cut wood, has been gradually making his mark on the PW hillside.  He seems to be making slow work of it. 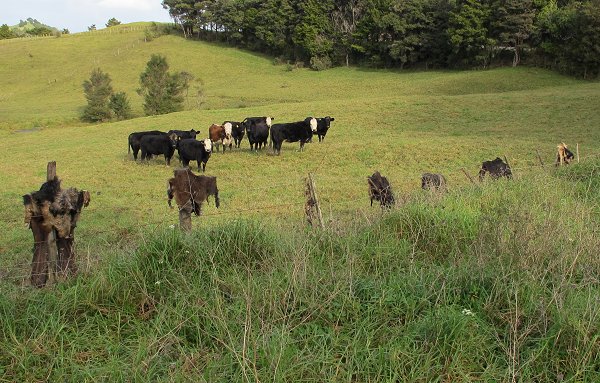 Down the valley there is a fence like this - perhaps someone was inspired by the fences with bras bicycles or jandals attached to them?  (More on the bra fence here and here.) 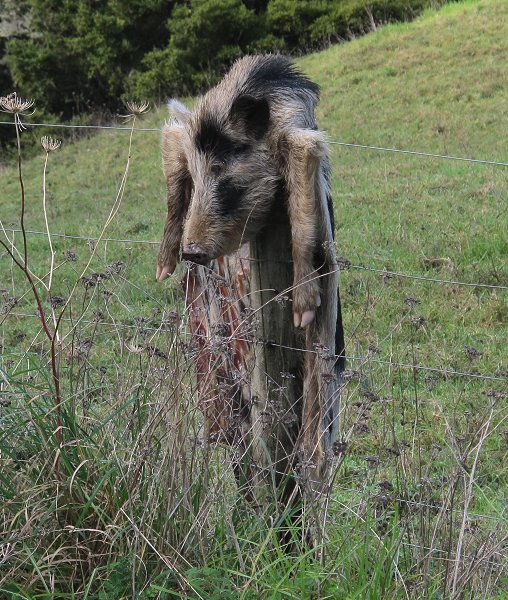 It's a gruesome look, but it might encourage some competitive pig-hunting around here, which may lead to less pig-rooting around the back of our place.  The pigs on this fence are very likely some of those we've seen at the back of the farm, since there's nothing to stop them running around the whole area.