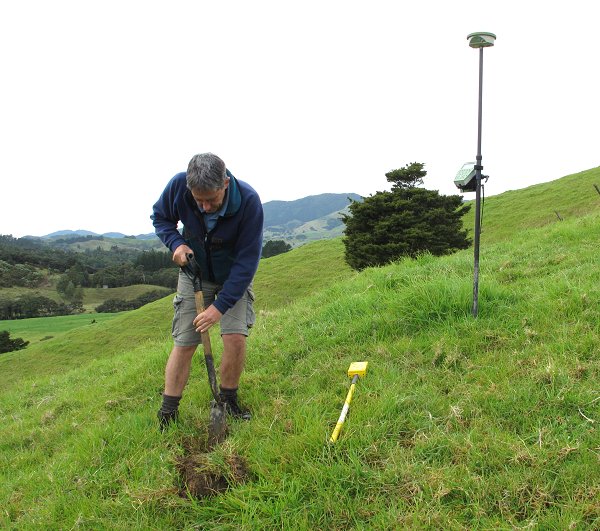 Stephan, on his way out to town, spotted this guy wandering around on our hillside over the road.  He turned out to have legitimate business there, being a surveyor contracted by the Council to survey the new fenceline boundary where the road corner work was done.

But the Council agreed they'd notify us whenever anyone was to come onto the land, and for very good reasons: in this case the guy was concerned about his equipment's safety in the presence of my nosey heifers.  If we'd known he was coming, I'd have moved them out of the way.

There's a hidden survey peg under the ground here, which the surveyor needed to locate before taking further readings. 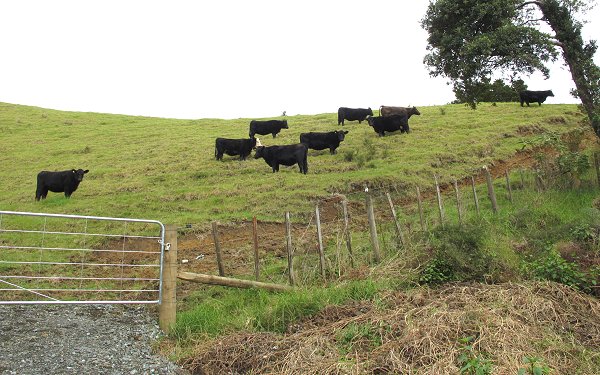 The heifers weren't actually being much of a problem; by the time I got around there, they were all just quietly grazing along this face.

We had a visit this afternoon from Gaye and Brian, friends who suggested that if we wanted to get away for a few days sometime, they'd watch over the farm and animals.  We've booked some tickets for a week away a bit later in the winter, and today was the first visit for Brian (who has farmed cattle for years) to see the farm and animals.  They stayed for dinner and we had a most enjoyable evening.

My long-time friend Jorja (we've known each other for over twenty years now) and her new partner, Imelda, arrived this evening for a stay of a few days.  Jorja wants to show Imelda the Far North and asked if they could base themselves here so we could also spend some time together. 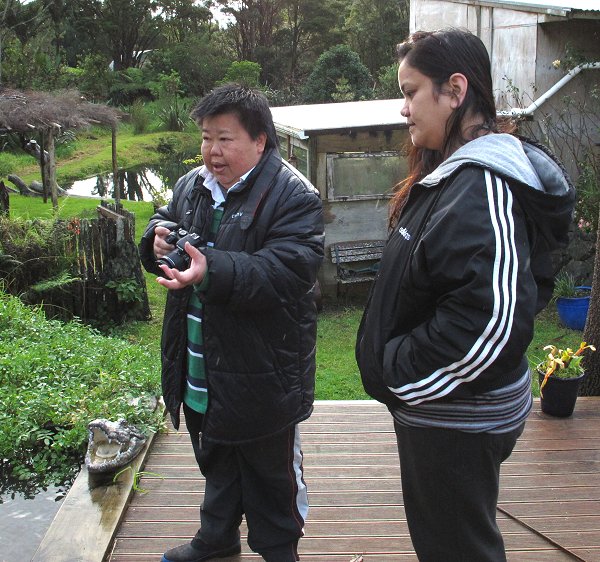 Jorja and Imelda went up to Cape Reinga today, the weather being significantly better than the forecast heavy rain - although it looked likely that would catch them somewhere. 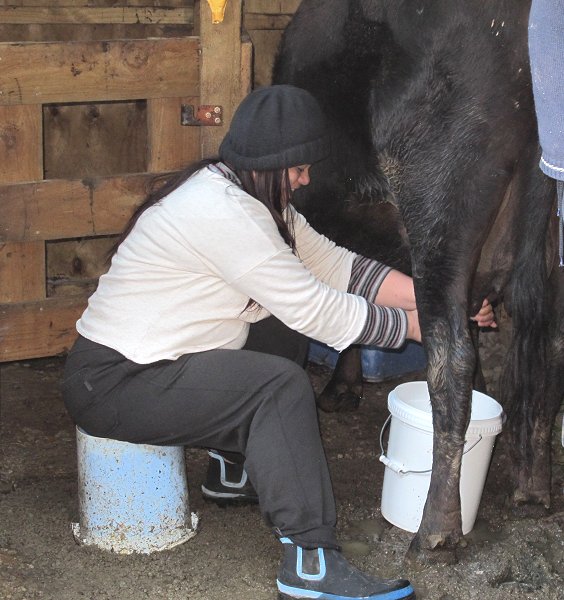 Imelda tried her hand at milking Zella.
Zella's an amazing little cow, being quiet enough to allow all of our guests to try and milk her.  Considering this is only her first year, she's tremendously cooperative. 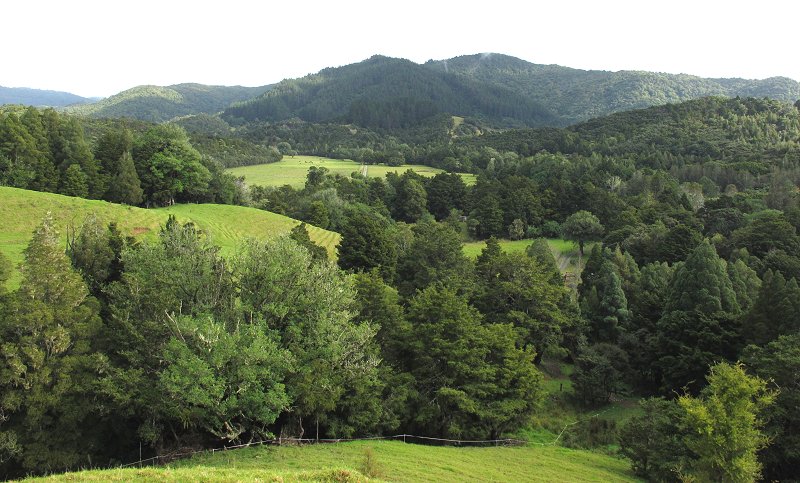 We live in a green and pleasant land. 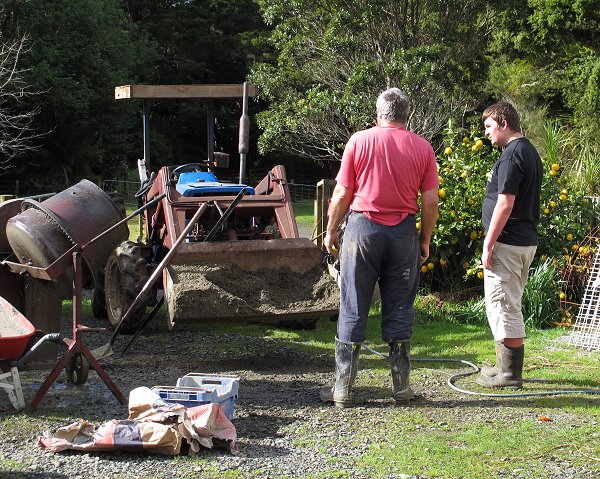 It now being school holiday time, Lance came out to help Stephan with some concreting in front of the work shed.

Stephan says he would have been discussing the finer points of mixing cement when I took this photo of them standing around. 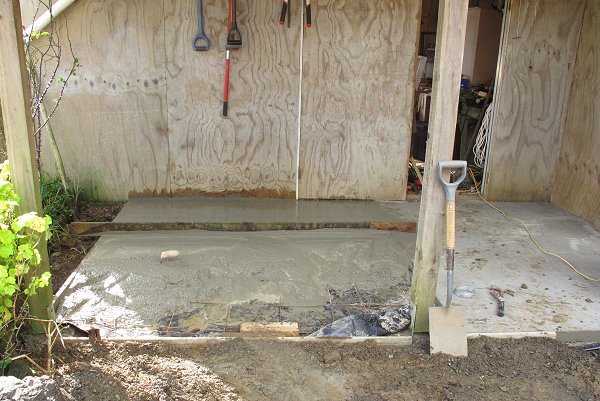 Stephan had poured the bit on the right the other day.  Water runs in here when it rains, so with a concrete pad and a proper drain along the front of it, the area will be much better for accessing the shed - and maybe still parking my bike, unless there's some other plan of which I'm not yet aware. 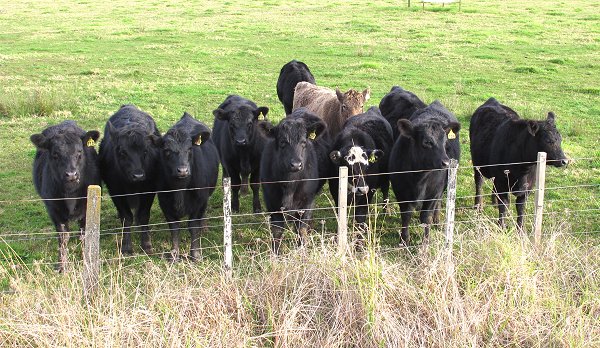 My mob of eleven little heifers.

I was standing on the back of the ute with Imelda and Jorja, so the heifers all came over to see what was going on. 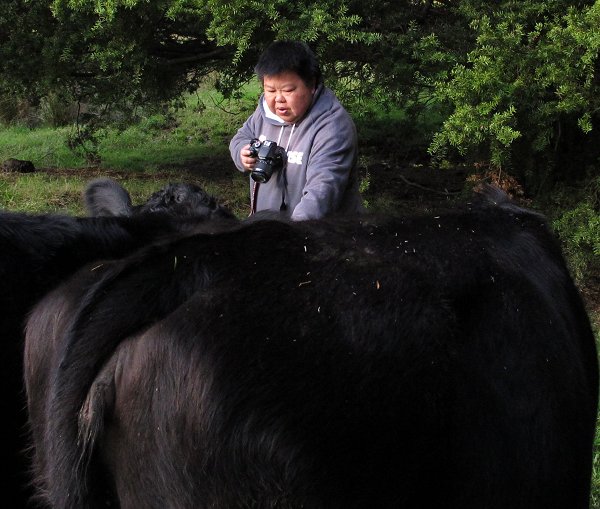 We went to see the cows, since they're the most interactive group of animals. 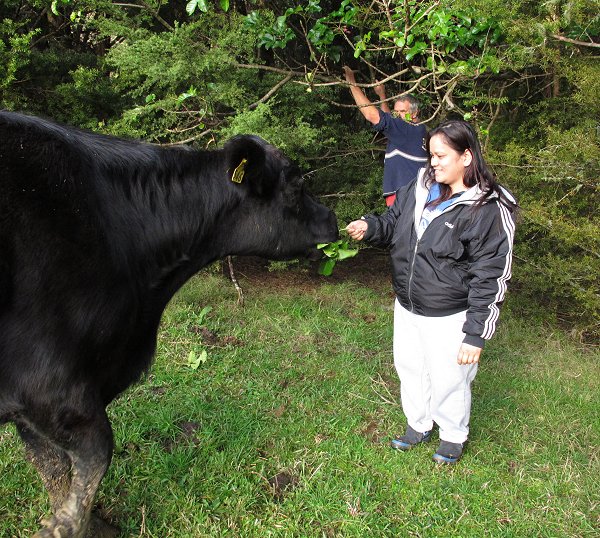 Several of them came over to accept bits of Puriri from the visitors. 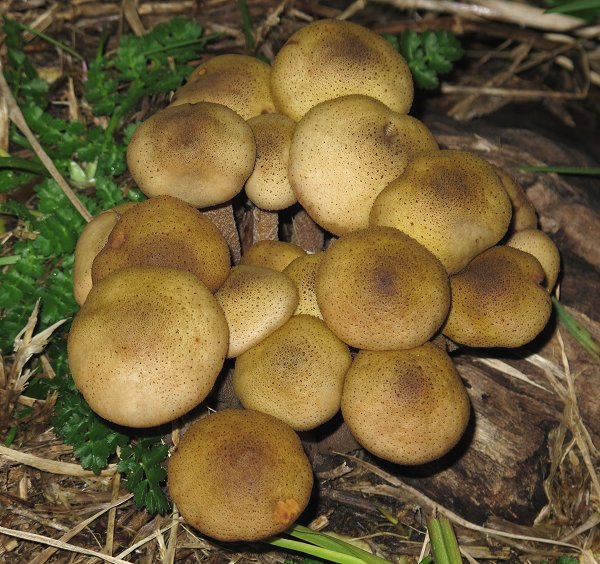 It must be the time of year for these fungi on dead wood. 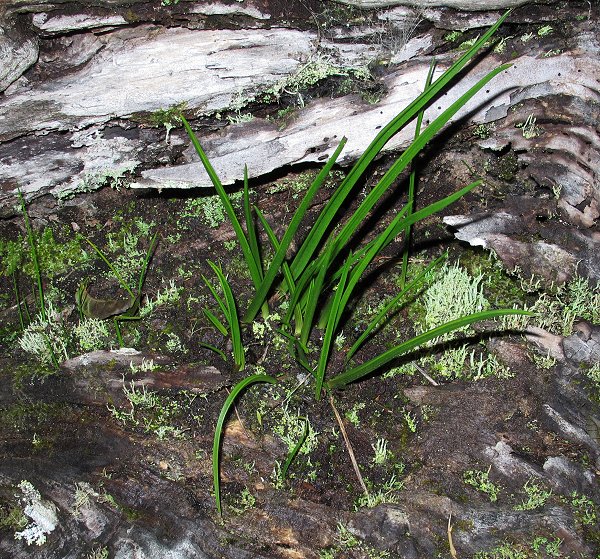 The orchids have increased in number again this year.

A picture from about this time last year, shows a slightly smaller group of plants.

There are several single plants in crevices separate from this main group, so they're definitely spreading and expanding. 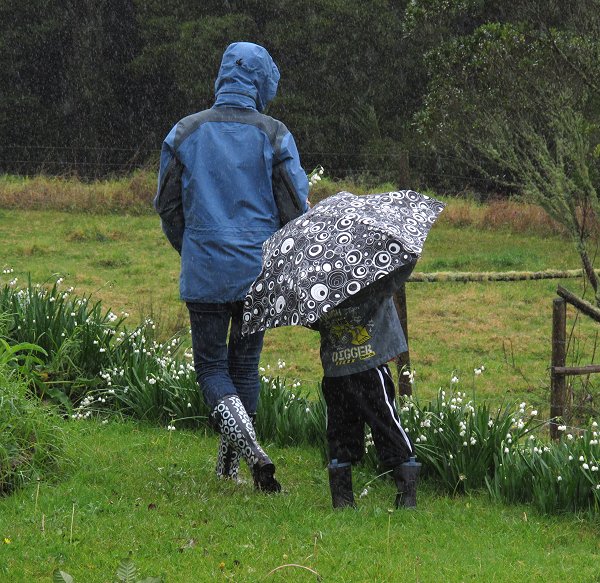 Imelda and Jorja went home at six this morning.

A little later, Sarah and her boys Kerehoma and Maihi came out to see us.  It started to rain quite hard, but there were Snowdrop flowers to be picked, to take home and put into food-colouring or ink, so that they'd suck up the colour and become prettily striped.  I remember doing that with my mother. 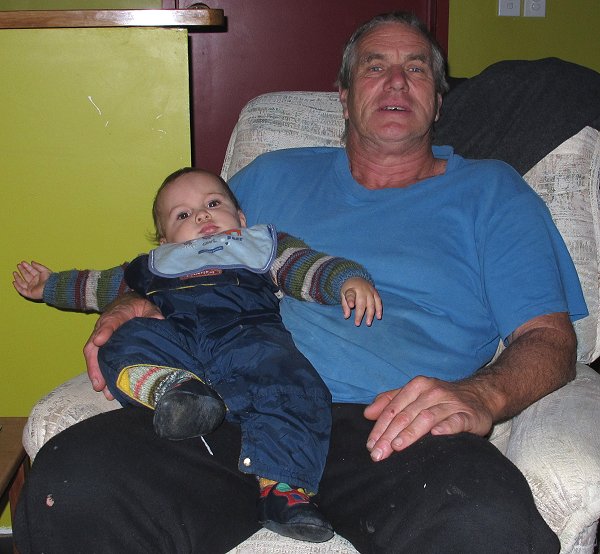 This is a very laid-back baby.  Maihi, with Great-uncle Stephan.

Sarah is a breast-feeding advocate and this child is a splendidly well-resourced example of the value of a natural feeding regime.  He's really heavy to lift, and it's all Sarah's doing! 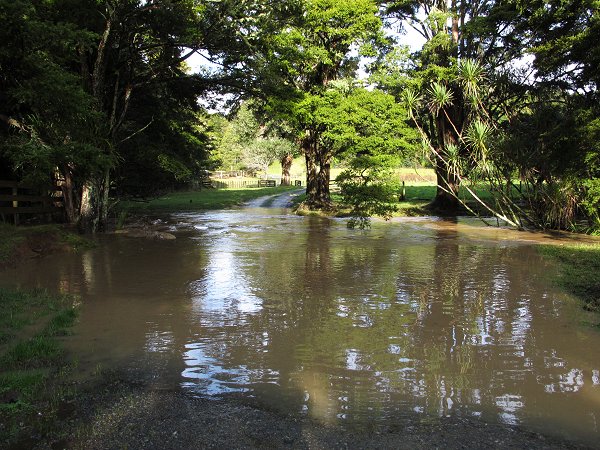 We only had 28mm of rain and it stopped quite abruptly just after Sarah left.  A little while later, hearing the noise of the river, we went down to see how high it was.  Usually the river doesn't come up like this unless 50-70mm has fallen, but it all depends on where it falls and at what rate.  This rainstorm was fairly intense. 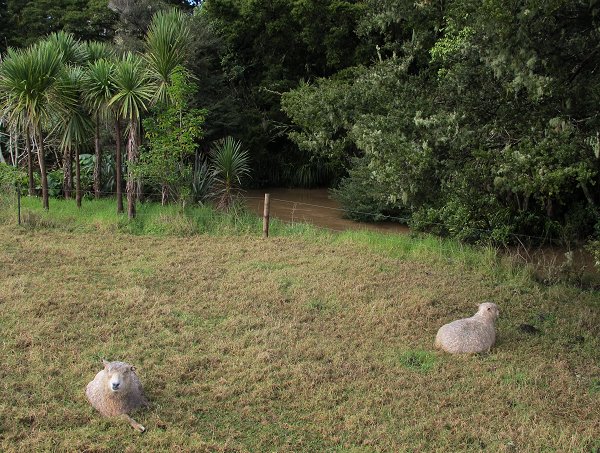 Yvette and her daughter now have a water-front address.  I may have to increase their rates. 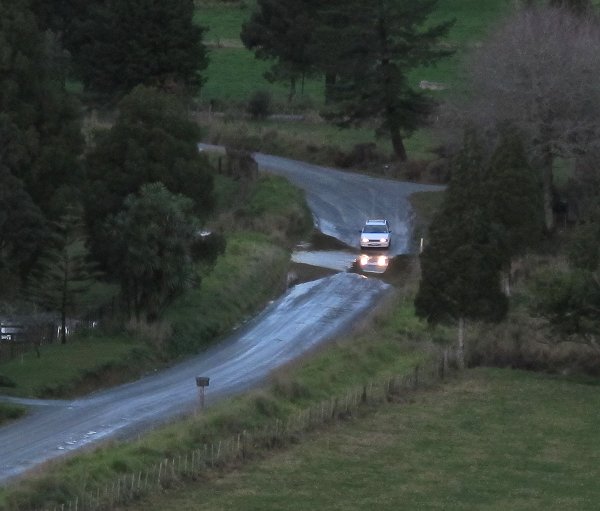 When the water went down again, Stephan and I waded across the bridge (it was mostly only ankle-deep), and headed up the hill over the road to check on the heifers.

The road usually floods at this low spot and the water remains here just a bit longer than over our bridge or another area 300m down the road, so we sometimes have to drive through it.

On our way back down the hill, Stephan checked along his new hot-wire on the new section of fence, for a short which would have livened up the ordinary fence, and thus led to my getting shocks off the steel gate.  I discovered the problem at an inopportune moment last week, when after bending down to closely inspect the nether regions of one of the heifers, my back "pinged" as I stood up straight again, so that I couldn't move.  Eventually I hobbled over to the gateway and lay down on the gravel (which is drier than lying on the grass) and did some press-up-like exercises to try and remedy the problem so I could make my way home.  I then reached up to the gate to pull myself up and received a nasty shock!  It was not the best moment to discover such a fault.

The problem occurred when the new hot-wire was tightened up, and had caught on a joining knot on the ordinary fence.  Stephan simply pushed one off the other with his boot this evening. 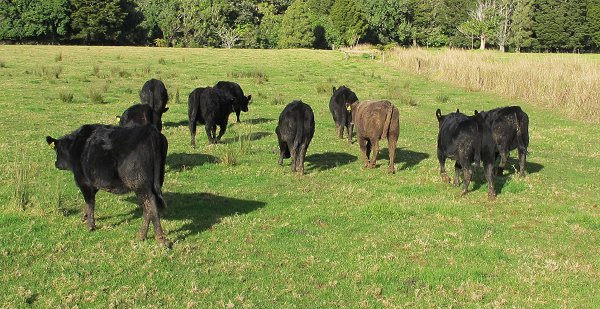 My grazing plan isn't quite panning out.  These heifers are eating faster than I thought they would or the grass isn't growing quickly enough.  Flat 1 isn't in their section of the plan, but I put them in here today anyway, to give the paddocks they're supposed to be eating a little longer to grow.  They're looking great though. 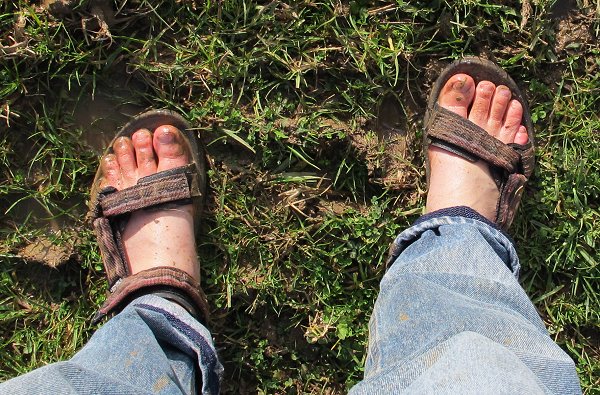 Because I wanted to walk out to check the cows, rather than taking the bike, I wore my sandals.  (Boots are not terribly comfortable for long walks.)  Despite having wet, muddy feet for much of the time, my feet were remarkably warm, considering the time of year.  Sandals aren't the greatest footwear in the muddy conditions, but with straps done up tight, they stay where they should be, well enough. 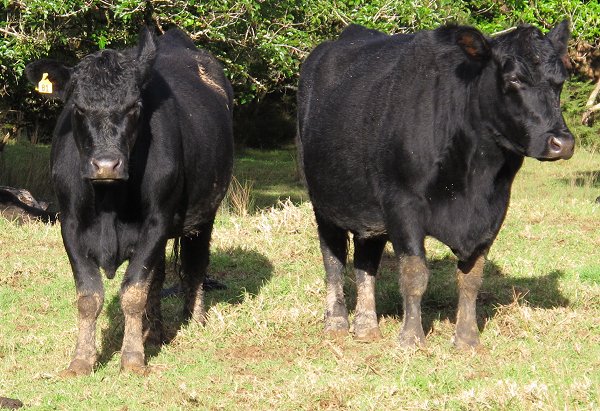 I walked across the stream to go and check on the cows there, and most of the others followed me; but when I returned, Eva and Demelza (daughter and mother) were still standing together in the sunshine.

People who don't know cattle always think these black cows look angry.  They're not, they're perfectly happy and relaxed, with their eyes half closed. 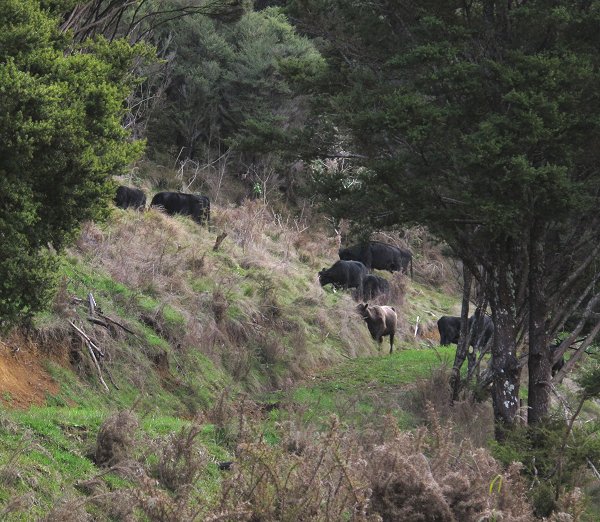 I called the cows to come with me and took them to the Pines paddock.  I'm gradually slowing them down, but trying to leave enough grass behind so that the paddocks recover reasonably quickly.  If the cattle chew them down to the boards, it takes ages for the grass to grow again.  Different areas also need different treatment. 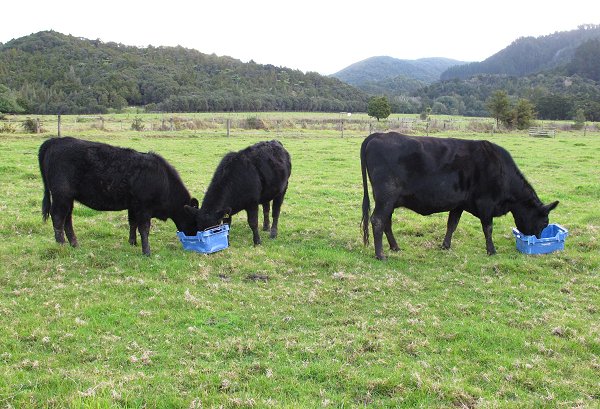 Yesterday I gave Zella and the twins some Molasses in these bins, so I could take some close-up pictures of Zella eating it for a magazine article I'd written.  Once seems to be enough for Zella to assume there's a pattern, so when I came walking down the lane this afternoon, she and the twins followed on their side of the fence.

Zella could probably do with some Magnesium, since the weather's been so horrid and she's still milking and it might make the twins a bit calmer.  They're both still quite jumpy, particularly Meg 699. 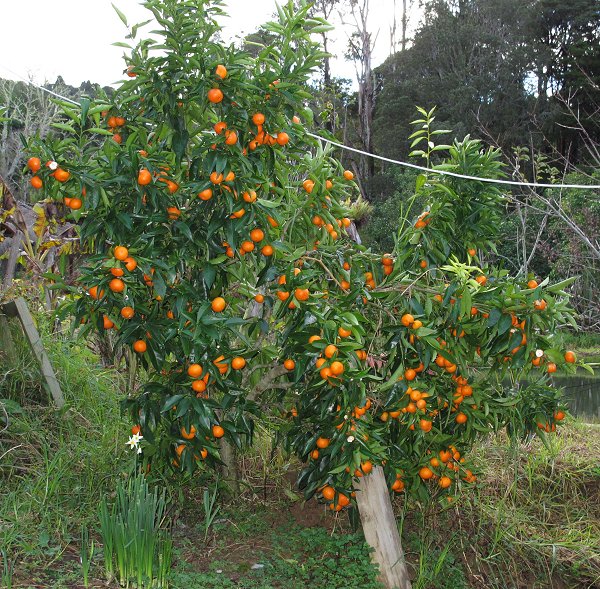 When I go out for my afternoon walk, I pick half a dozen Mandarins and stuff them into my pocket, to eat as I go.  I've never been a great fruit eater, but these days I really like to eat what's coming off our own trees.  We'll need to find other plants or trees which are ready for harvest at different times of the year, so I can have fruit all year round.  I'm really not keen on mass produce - except for Bananas, although if our plants do well, we may even have them, and then I shall probably become seasonal in Banana-eating too.