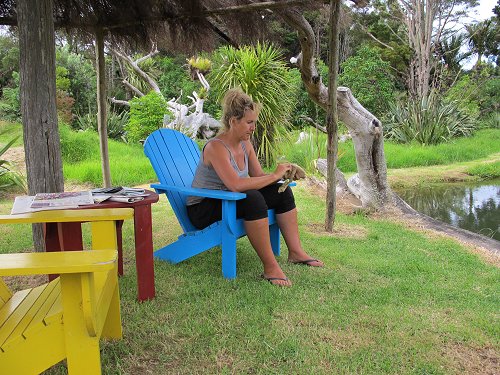 My brother-in-law (I only have one such legally-defined relative) is about to turn 50 and Jude and Stephan spent some time making him a birthday present.  Jude wanted to give him a set of wind chimes and we happened to have some of the materials to hand, because Stephan's father, Patrick Mathew, had once made several sets of chimes and there was a dilapidated set in the shed.

Jude decided upon a leaf shape for the base of the centre and so she and Stephan created it and Jude spent hours working on its finish.

The photo doesn't quite do them the credit they deserve.  Jude had polished the metal so that it glistened in a pleasant sort of way and the bits of turned wood were oiled.  Sadly I neglected to check that I'd included the leaf at the bottom in my photograph!

Jude packed it all away in a box, and would have needed to make sure everything hung evenly again when she installed it in its permanent location. 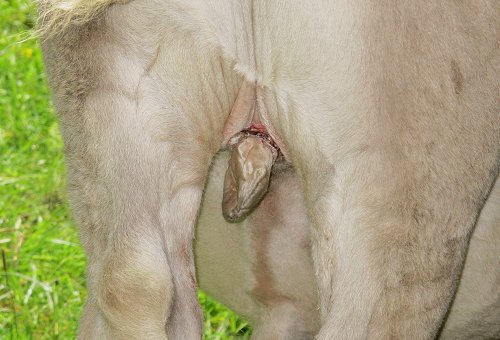 Castration destruction.  This was the prettiest scrotum in the herd, but is now shrivelled and will soon fall off due to the constriction of the strong rubber ring we applied three weeks ago.

It's a nasty process, but when the calves are healthy and growing, they don't suffer any noticeable check from this treatment.  Infection is rare, although there may be some localised activity because of the nature of the wound while the dead scrotum is coming away from the body.  When the scrotum drops off, the remaining wound will heal over and the steer calf will grow up into a fine beef animal.

The cattle were just standing around enjoying the morning when I went to check on #90's mob.  When they're well-fed and there's nothing bothering them, they'll often stand quietly together, apparently doing nothing at all.  The bull was wandering amongst them sniffing here and there, making sure there was nothing he needed to do.

The visibility of their hips and ribs might seem to be a sign of hideously underfed cattle, but here in the sunshine, those lines show up on their glossy coats.  Under the skin there's a soft layer of fat which can be felt when one strokes them.  A cow shouldn't be overly fat during lactation anyway, or it may indicate that she's holding onto too much of her resources and not properly feeding her calf.  Some in this mob are in better condition than others, usually indicating what happened to them last year - for instance the cow in the left foreground is 568 who raised twins last season. 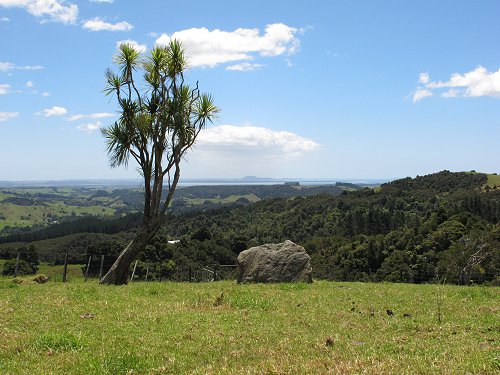 This afternoon Stephan attended to a trap-line over near Fairburns while I visited some people who are new to farming, and whom I have been helping with general advice on how to select and look after their animals.

This was one of the views to which I was treated as we walked to look at the cattle.  Stunning. 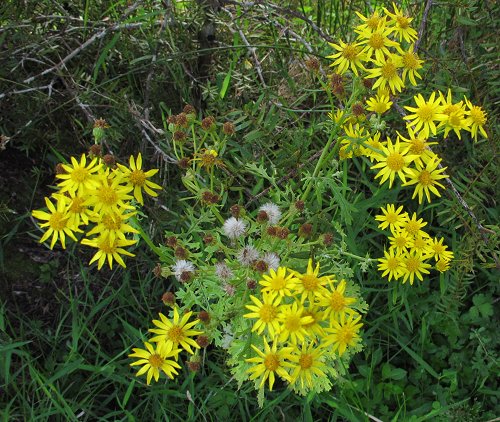 Prompted by the sight of lots of Ragwort on properties along the road on our way home, I went out to gather some more of our own.  Some of the plants are beginning to seed, although the majority are still in the earlier stages of flowering.  Fortunately it is not difficult to gather this sort of spray together, keeping the seed heads contained in the middle and cut them off and bag them. 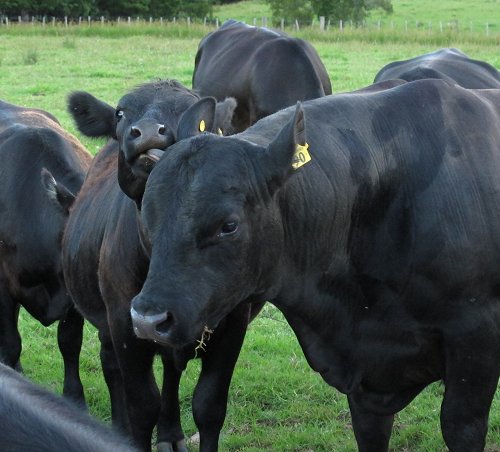 Love is in the ear? 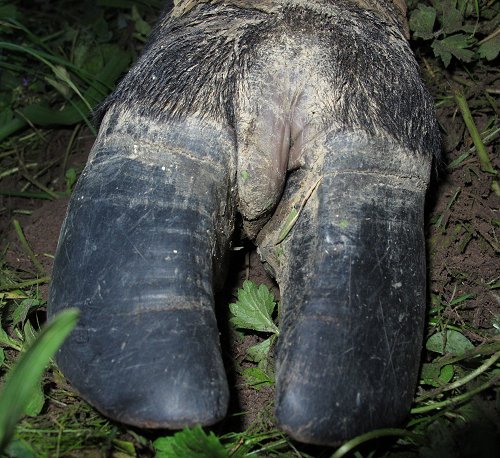 This is Ranu 31's foot, the one we had to get the vet to treat after an injury became infected just over a year ago.  There's obviously extra flesh there, but she has been quite comfortable ever since it healed. 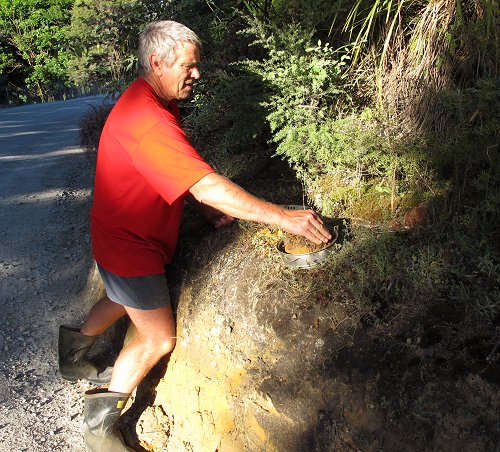 When we were walking back from sorting out the road-realignment issues the other day, I noticed a Sun Orchid plant on the benched corner which will be destroyed when work begins to remove part of the bank.  I resolved to go back and rescue it before it disappears (they die down until the new leaves emerge again in the Autumn) or gets demolished.

Stephan used his machete to dig out a reasonable margin of soil around the two tiny plants and we brought them home.  They will join my small collection of rescued-from-destruction plants by the pond.

I drove past these plants twice a day during the flowering season when I was working at school in November, but never saw them - and I was going to great lengths to see the plants around the farm at the time. 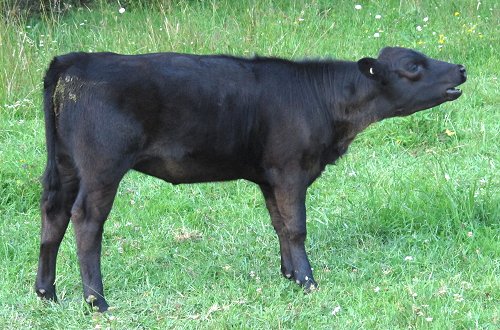 This evening I found 698 standing on her own (she's one of the twins), yelling for her mother.  For some reason she does this quite a lot, although it would appear she's getting fed just as much as her sister - when I weighed them on the 12th they were within half a kilogram of each other. 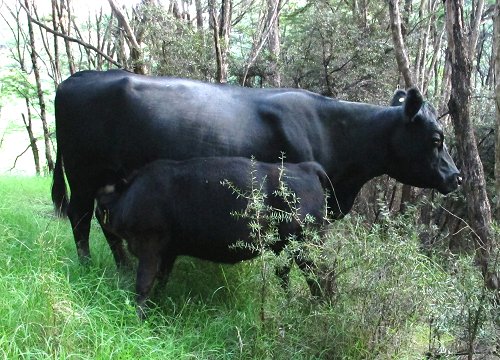 Across the river, up on the scrubby hillside, 699 was having dinner to herself and 545 was, as usual, not bothering to answer her other daughter.  She doesn't answer either of them when they're yelling because they've lost track of her location, so there's no obvious favouritism. 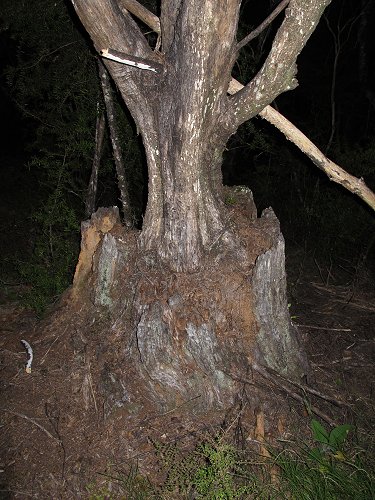 This is (probably) the stump of a Totara tree, and in it is growing a mature Kanuka.  Trees grow on trees all around this farm.

It might horrify our visitors to know how much more untidy everything was before I spend a day cleaning up before they get here, but that's the truth of it.  I spent most of today doing house tidying things, preparing for our guests, Sarah and Mike, whom we first met four years ago.  One doesn't like things to look as if they've slipped too badly!