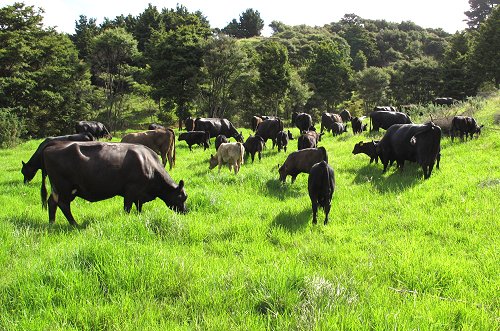 Feed is getting a bit short on the flats, so after weighing the calves this afternoon I sent #90 and his mob out into the Pines paddock for 24 hours.  It's a small enough paddock that I shouldn't need to go around it in the time they're in there - I don't like the idea of coming across, or being startled by the bull when I haven't known where he is.

I've arranged my grazing so I can keep #90 mostly on the flats where I can see him in the mob, and #87 is out the back where, even if he hides under trees, it doesn't worry me. 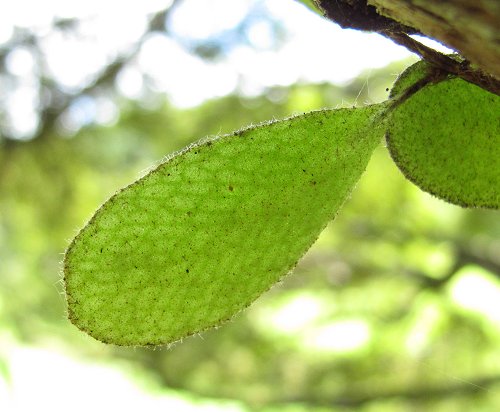 There is beauty all around.  I happened to look up through one of these leaves and noticed its intricate patterns, the tiny hairs.  It is the Leather Leaf Fern, Pyrrosia eleagnifolia, which grows very commonly on most trees on the farm.

I'm still waiting to hear the results of the DNA test on the twins.  I watched them both approach their mother this afternoon for a feed and as I was downhill from them, I was able to take some pictures of their udder areas while they fed.  This is the first difference I've found between them: 698 has an extra teat at the back left and 699 has an extra in the middle on the right.  (There's mud, not white hair, on 699's belly.) 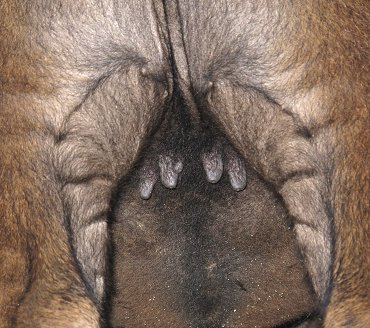 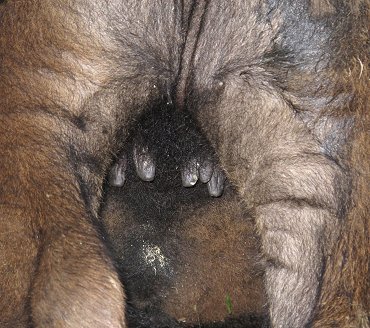 I know that clones can have slight differences in colour patterns due to environmental effects during development.  I wonder if this is a difference possibly caused in the same way, or are they just fraternal twins? 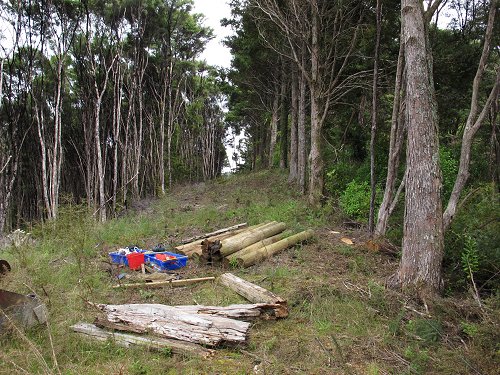 A few weeks ago there was what remained of a very old fence on this boundary, which Stephan has removed.  The fence was probably erected about sixty years ago and the Puriri posts were breaking in several places, there were no battens left and only several strands of wire remained.  It was not a secure stock boundary and we were only lucky none of the animals decided to go for a wander to explore beyond it.

Today Stephan began preparing the area for the new fence.  The cost of it should be shared with the owner of the neighbouring land, but we can't find him and we need the fence done.

We had a planning meeting and talked about how old the trees on the line were, how we'd fence on either side of them and how much more they'd grow in the next twenty years.  I doubt Stephan, when he's pushing 80, will want to be doing big fencing maintenance jobs, so we decided the trees had to go - they grew on that line only because they were protected by the wires of the fence, but they eventually contributed to the fence's demise.

I always keep an ear out for the noise of the chainsaw when Stephan's working alone.  He has our PLB (Personal Locator Beacon) on his chainsaw chaps belt, which he could activate if he chopped his leg off, but if a tree fell on him, he might not be able to do that.  When I'd heard no noise for a while, I went to see what was up and found him walking home with the empty fuel can, so I went for a walk while he took the bike back to refuel. 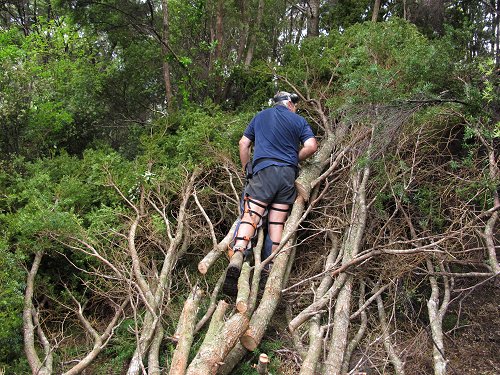 Where Stephan had been cutting down the trees, I noticed the frantic dashing back and forth by an agitated Tui.  We spent a little while seeing if we could see any signs of nests in the felled trees, but it was a pretty hopeless task.  I figure we spend a lot of money and time contributing to the protection of the birdlife here, so if a few chicks were sacrificed in the necessary maintenance of the whole project, so be it. 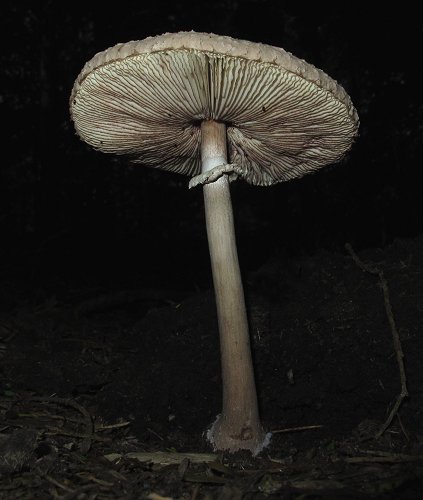 I don't think it's particularly common to find toadstools around in January!  It's rarely damp enough for them to flourish, but this is a fine specimen. 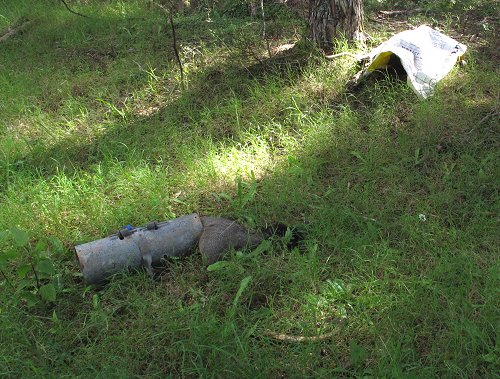 In the Back Barn paddock Stephan has a double tunnel trap set, and one end of it caught a possum, which must have thrashed about quite a bit as it died.  The other trap is still under the sack at top right.  The sack is pinned over the traps to prevent Kiwi investigating the bait through the slots in the metal, and potentially getting their bills caught. 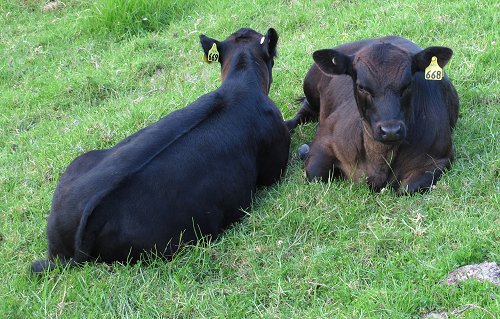 Another couple of numerically tidy calves.  Presumably this is simply a case of me noticing when they sit together, rather than the calves having some strange sense which causes them to appear in numerical order whenever I look for them? 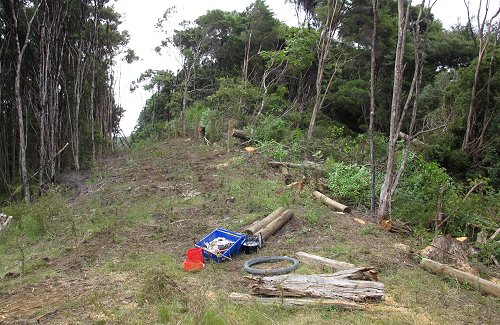 Stephan and his young helper, Lance, who's staying for a couple of days' farm work experience during the school holidays, dug many of the posts in by hand through the tree roots today. 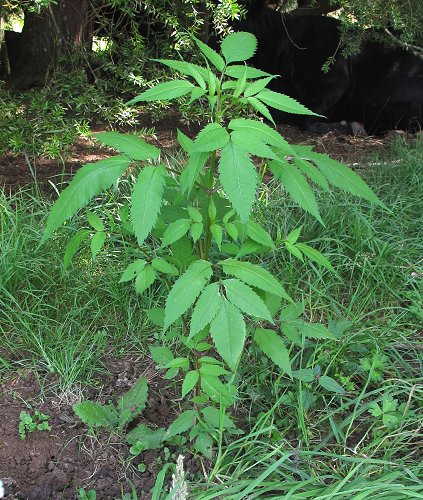 I've been finding Beggar's Tick plants in various places around the farm.  I hope I can keep this weed under control, although it's a sneaky spreader with its fabulous seed transport system!  There are some pictures of the seeds themselves here. 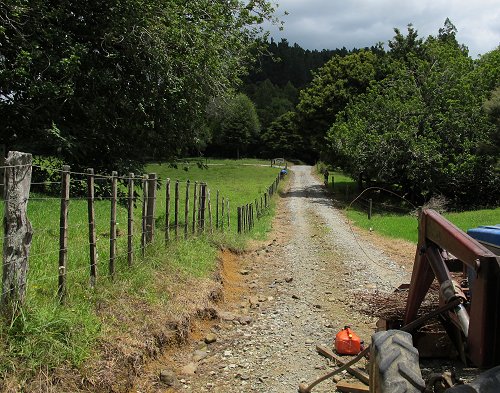 Lance and Stephan worked on this fence down the lane between the Mushroom 1 and Frog paddocks.  I've wanted the barbed wire removed from the fence for ages and today it's finally happening!  The calves tend to walk along the bit of grass growing by the fence, and if somebody else shoves them, injuries can be sustained.  That's not good for obvious welfare reasons, but also because one of the products of beef animals is their hide, used for high quality leather, unless it is scarred. 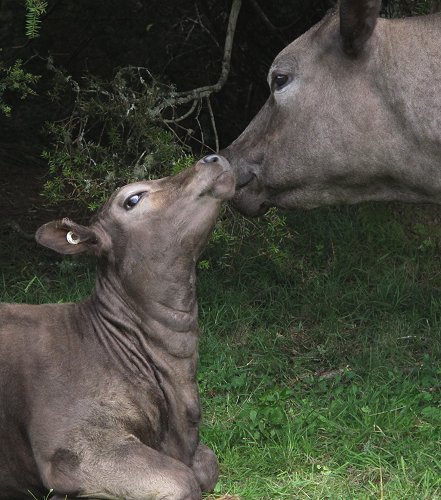 I stood and watched these two before going for my walk around the cows this evening: Curly and Endberly again.  Look at that fat neck!  I like seeing calves this well resourced.  I wouldn't like her to be much fatter, but being able to lay down some fat means she's getting more than she needs for growth, so she's able to reach her potential at this stage. 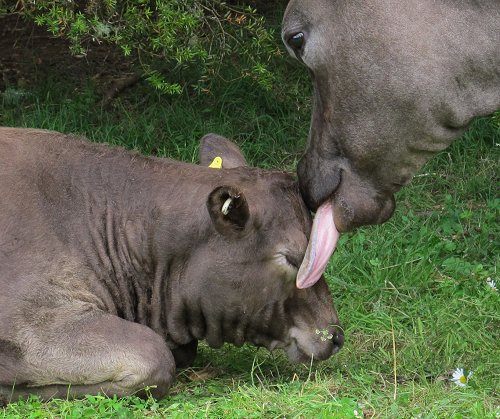 They were in the middle of a grooming session, with Curly licking Endberly all over her face and neck.  I kept thinking about how my mother (and others of her generation and culture) used to dampen a bit of their handkerchiefs with their tongues to scrub dried breakfast off our faces if we'd not washed properly before setting off for school.  I suppose we were lucky they weren't inclined to actually lick us clean! 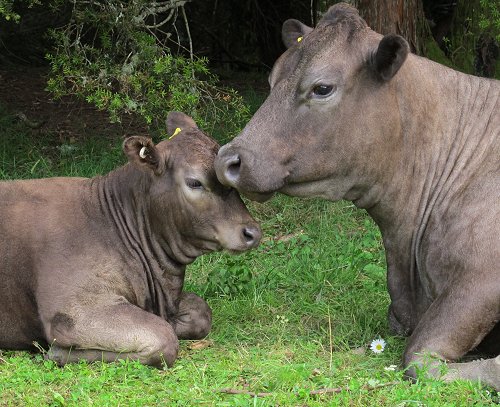 When they were finished, Curly sat down and they rested, head to head.

There's so much obvious affection (is that too anthropomorphic?) between mothers and calves.  It's necessary for survival, presumably: if you weren't so connected to your calf, perhaps you wouldn't let it feed and it would die. 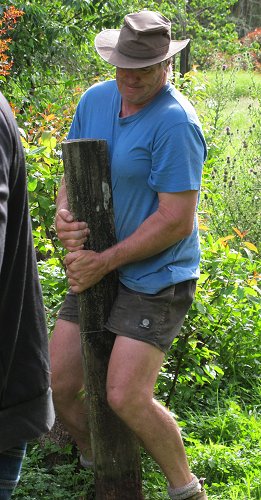 Who needs machinery?  Just pull the post out of the ground.

We were over at Jane's place, where Roger Gale and friend Dominic had arrived to begin felling a row of out-of-control shelter-belt trees and this fence-post was in the way.

Stephan does ridiculous things like this all the time, picking up crazily heavy objects and moving them around.  He's tremendously useful, having such extraordinary strength.

I'm still thankful he had the strength to shove the firewood trailer off the top of himself the other summer, or there'd have been no more of this! 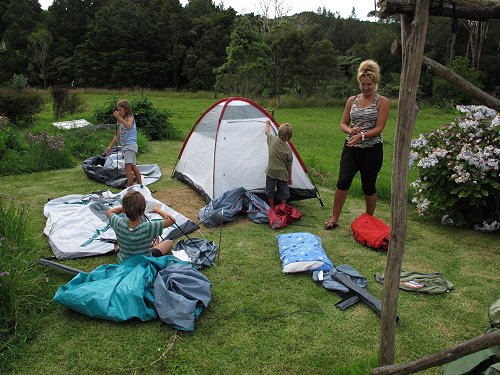 Jude and the children arrived this afternoon for a few days' visit and they all have tents.

The tents were great because having their separate sleeping quarters, there were no fights at bedtime, and because I offered a prize if nobody snuck upstairs and woke their mother in the early hours, they all stayed there until the sun was well risen. 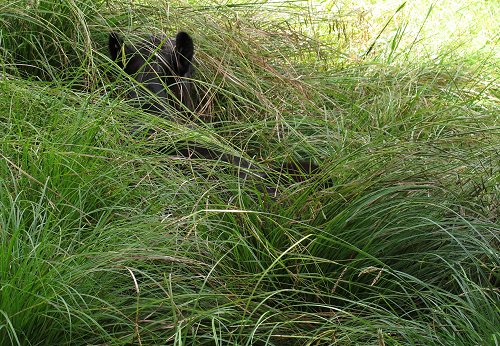 I nearly fell over this calf this morning, hiding in the Sedge in the Middle Back Paddock.  We really need to do something more serious about that weed!  The calf isn't a midget either, weighing over 150kg. 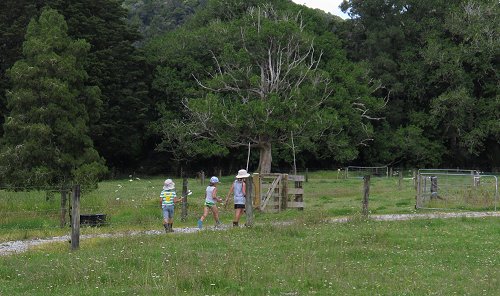 The children swam in the pond, made weird potions out of herbs and smelly plants they found, then set off to pick blackberries.  They squashed those up in a most unappetising manner and then froze some of the juice, drank some of it and spilled the rest on the floor and deck ... 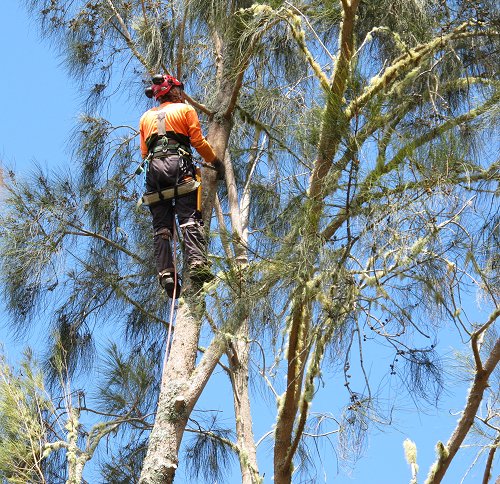 In the afternoon we went over to Jane's to watch the last of the trees coming down - these ones had to be felled carefully from the top, because they were growing right next to Jane's shed.

You may recall this outfit from the top of another tree. 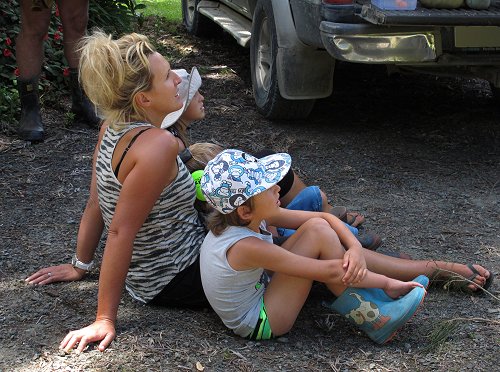 Jude and the three children watched from a safe distance as Roger scaled the tree...

...then went off and found a tree of their own, with Roger and Jill's grandson. 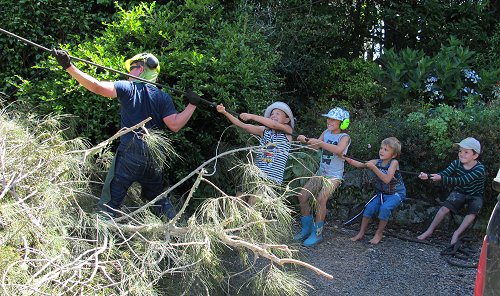 When the last tree was ready for the last cut, Roger asked the four children if they'd like to help Dominic pull it down to make sure it fell the right way.  They were very keen to help!