The week beginning the 7th of January 2012.
Saturday the 7th 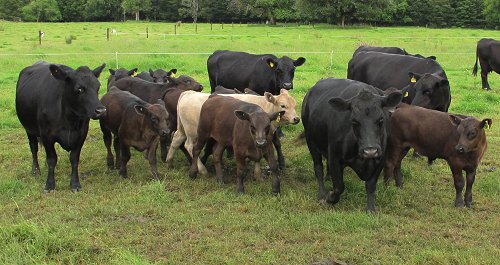 479 was on heat and she had the biggest following of male calves I've yet seen.  Eleven of the 14 in this mob were following her wherever she went.  Bull #87 was standing quietly nearby.  Perhaps he's already done his thing, or knows she's not quite ready.  I like that bull more and more.

While checking on cattle in the Bush Flat paddock this evening, I watched three Kukupa (native Wood Pigeons) chasing each other around and around one of the big Puriri trees.  They appear to rear young quite successfully around here, since we often see what appear to be family groups of parent birds with an extra we assume to be their offspring, at this time of the year.  There are unfortunately still people around who kill and eat them, despite their endangered status. 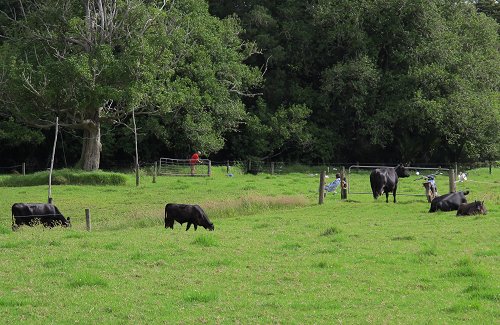 We have an electric fence problem.  Many of the calves virtually ignore the electric tapes and when the yearling bull with the house cows began doing the same, it became obvious we'd need to do something to track down the problem.

Somewhere across the flats there's a leak and so we set out to find it.  I sat by the main switch, Jill went out with a deck chair and sat wherever Stephan indicated, and he went along the fences to the various points of connection, isolating pieces of fence and taking voltage readings.  Stephan and Jill had a sheet each of yellow and one of orange card, which they held up to signal back to me to turn the fence on or off.  For some of the time I could see Stephan anyway, but there were places he was out of my sight, so Jill was a useful relay assistant.

Stephan found a few things which were sucking the power out of the system, but nothing major.  We've picked up a bit of power as a result of him clearing problems along the way, but more work will be needed. 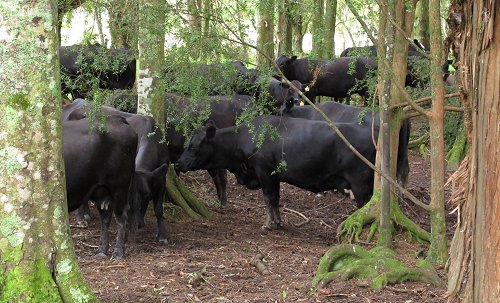 There's an area in the Camp paddock where the fence runs along the riverbank across from the Windmill paddock, where the cattle regularly congregate.  The trees are large Totara and Kahikatea and the shade is deep and cool beneath them.  It's a peaceful place to be.

We're having discussions with the local Council about their wish to remodel the sharp corner on the road just before our entrance.  (There's a picture of the bit they want to dig away here.)

The project has a bit of a chequered history.  For years there were rumblings about someone up the road wanting the Council to do something about the corner, but a friend of Stephan's parents who was one of the Council's engineers, always urged them to resist, because it'll be a complicated job, and there wasn't any real need beyond catering for idiots who wouldn't drive with due care.

A few years ago we went out to investigate some machine noise on the road and discovered council contractors digging away part of the bank!  Nobody had advised us any work was to be done and since what they were doing would potentially have implications for our paddock above the corner, I was pretty cross!  They stopped quite quickly when they accidentally dug out the corner boundary peg and realised they couldn't go any further.

This latest chapter of the story hasn't been without its own annoyance, beginning with orange marks suddenly appearing on the banks beside the road in four places and later followed by a phone call from a neighbour up the road who'd been told by a contract digger operator that we'd obstructed the Council in their plans to remodel the corner and she therefore proposed that any harm coming to anyone due to crashing their vehicles on that dangerous corner would be our fault!  I informed her that nobody from the Council had yet approached us about the matter and that indeed my calls to query the appearance of the orange painted marks had gone unanswered.

We don't have any particular objection to the work being carried out, but because it'll involve encroachment into our property, there are procedures the Council must follow and it seems none of these things happen quickly.

We eventually had a visit from a very nice Engineer late last year and walked with him over the area above the road, and he detailed how much land they'd need to take to bench the bank back to ensure it remained stable afterwards.  He told us we'd be contacted by the Council's legal property office in due course. 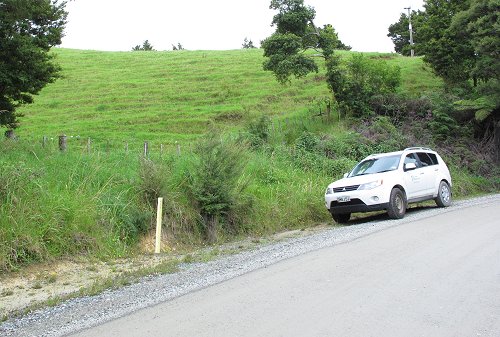 Weeks passed until a phone call from a very pleasant Property Legalisation Officer yesterday, who came today to present us with an Entry Agreement.  We negotiated some extra terms, which include their installing a gate in the fence to allow their workers and machinery access to the top of the corner.  The contractors are also obliged to contact us before they visit or commence any work, particularly because I may at any time have a mob of cattle in the paddock.

The main reason for the push to have this job done now is the beginning of the harvest of large Pine plantations up the valley.  Big trucks are already going up and down the road and they clip the vegetation on this corner when coming down loaded with logs.  There are places where there's no room for such a large vehicle and any other.  The forestry owners have installed a radio in the school bus so the driver can listen in for transmissions from the truckies as they pass distance markers up and down the road, warning each other of their positions. 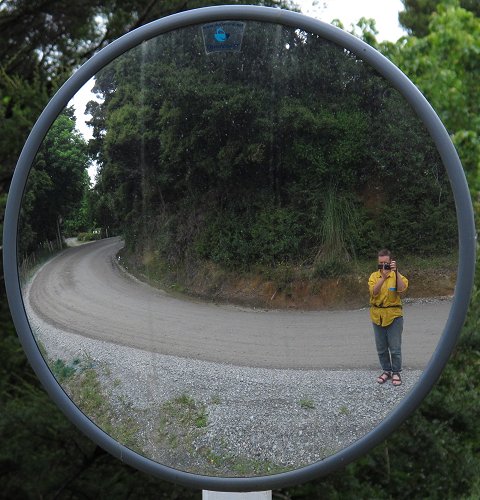 Two mirrors were recently installed on the outside of the corner, for the safety of the residents of two driveways, but they've been a fantastic addition for the rest of us as well.  I don't know why nobody did anything about having them put up before - and it was only Stephan's urging one of the neighbours to get onto the Council about it that initiated the process this time.  Presumably they won't be as necessary once the corner is changed.

In the mean time, they're particularly reassuring because you can see all the way around the corner as you approach it, and have good warning should a large truck be approaching from the other direction. 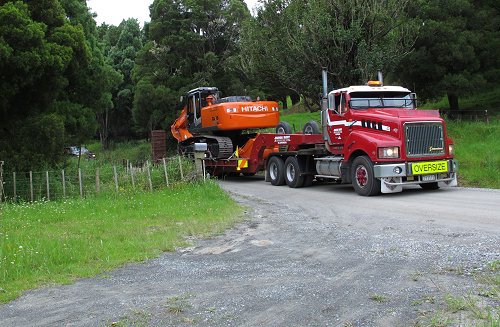 As we walked back to our gateway a pilot vehicle went up the road, warning of a wide load following.  It certainly was!  The enormous digger on the back of this truck was shiny, brand new, never been used and we waved to indicate we'd quite like them to drop it off right there, thanks.

It'll be going up to the forestry job. 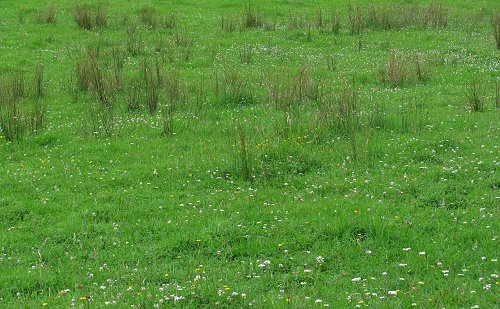 This is the area of the Frog paddock closest to the lane fence (seen in its usual winter boggy state in July last year).  I am very pleased to see how nicely it still grows grass and clover (a few of the white flowers are Carrotweed/Parsley Dropwort), despite its wetness and soil damage during the winter months.  I'll keep putting lime on here regularly and the rushes will continue to thin.  There are far fewer here than there used to be.  We did a bit of weed wiping a couple of years ago but most of the decrease is due to the improving soil fertility. 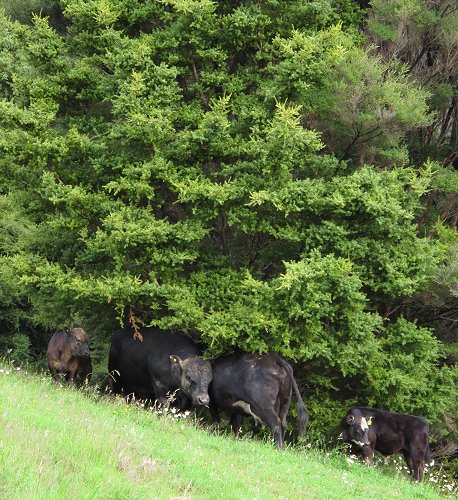 I was standing up the hill from this little group under a Totara tree (I find it surprisingly difficult to work out whether I'm looking uphill or down in a photo).  Bull #87 was actively interested in white-faced 470, on heat for the first time since being with the bull this season.  We're just coming up to the end of the first three weeks (one oestrus cycle for the cows) of mating and only two cows are yet to be mated: 517, who was on heat, I think, on the morning of the day the bulls went out, so only just missed out then and must be about to cycle again; and Abigail, who calved in December.
That's unusually good for my herd. 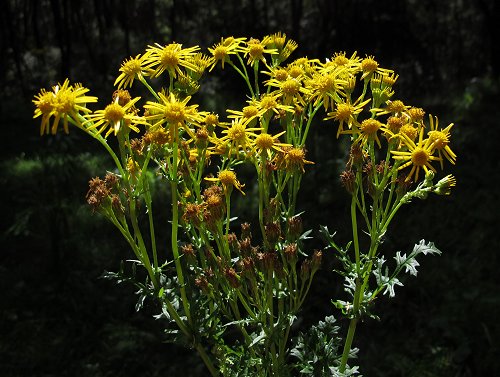 Mike, his three sons and a friend, all came out for a walk and some Ragwort picking this afternoon.  The boys seemed to be back by the pond rather earlier than Mike and I, but it was good for me to be propelled out onto the hills to begin the annual hunt.  The Ragwort is really late this year, which is fortunate, since we've not had much time to deal with it before now.

In this picture you might detect that some of the flowers have lost their bright yellow petals, and soon after that they turn to fluffy white seed heads, ready to release hundreds of their tiny seeds on the wind.  We always find a few which have already gone to seed, sometimes only because something has broken or bent the stem, which causes the flowers to decline faster than they naturally would, and so they set seed early.  That's also why we never leave flowers on the plants when we pull them out, because there would then be seed everywhere. 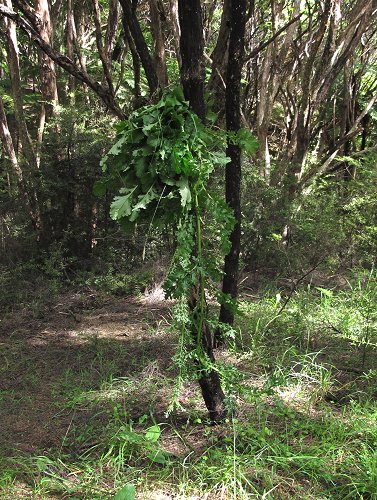 We cut off the flowers and bring them home in the sacks we carry on these walks, then pull the plants out and leave them hanging in trees to dry and die.

Leaving the plants on the ground is unwise for two reasons: firstly sometimes the plants will be kept moist enough to survive long enough for new flowers to bloom; secondly because the cattle may accidentally eat the wilted leaves as they're grazing around these areas and the plants lose none of their toxic effect as they expire. 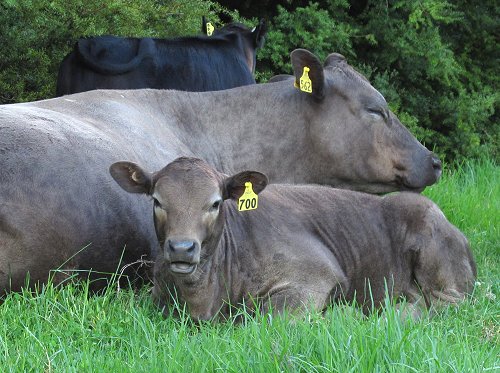 Curly looks so relaxed, with her daughter cosily cuddled up beside her.  Endberly is being fed very well, judging by the increasing skin folds around her neck.  I weighed this mob yesterday and she's now 150kg, growing at 1.25kg/day.