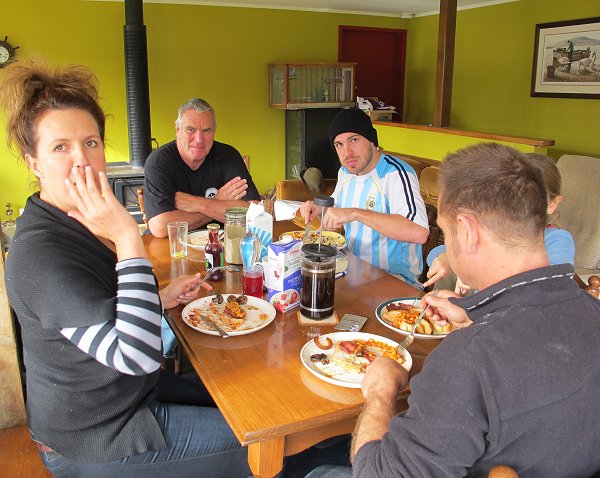 Yesterday Stephan picked up some of the bacon from Sniff, our butcher, and this morning he and Roger cooked lots of it for breakfast for everyone. 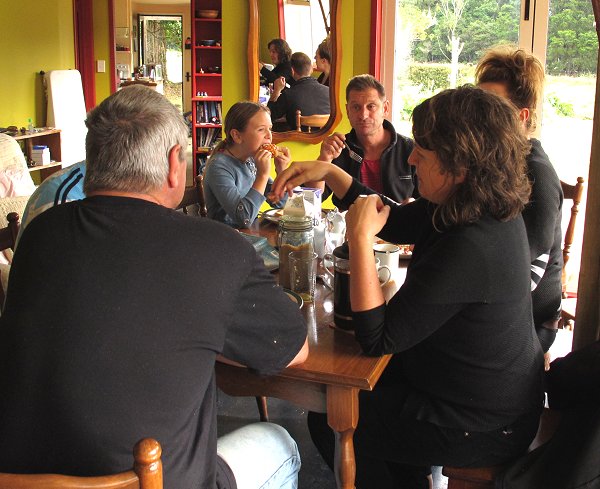 Stella hoed into her breakfast with great gusto, because she had been participating in the 40-hour famine fund-raiser - I think they let younger children do it for only 20 hours and they're allowed to eat rice!  I told Stella that for authenticity, the rice ought to be cooked in water from a muddy puddle.  Our late breakfast-time was the end of her fast.

Stella had also given up talking for the duration of the fasting time, which was strange (because she's not usually particularly quiet) and annoying because she kept writing and pointing at notes to communicate with everyone and wouldn't answer questions!

Ella and Michelle arrived during the day and Ella and Stella were delighted to see each other again.  The nephews, Issa, Jasper and Louie went with Roger and Stephan on the tractor out to collect firewood for a bonfire to be set down in the paddock in front of the house.  Lots of people spent some time sorting out a frame for a canopy over the deck, but then it was discovered the canopy material to cover it could not be found at the house from which it was borrowed.  Several plastic tarpaulins were made to fit and served very well.

We've been watching the weather forecasts for the last couple of weeks, trying to determine whether we'd be able to have our party at home, or would need to decamp to the Takahue Hall, which we'd tentatively booked, in case we would need it.  In the event the cloud cover was quite thick, but the air thankfully remained dry, true to forecast. 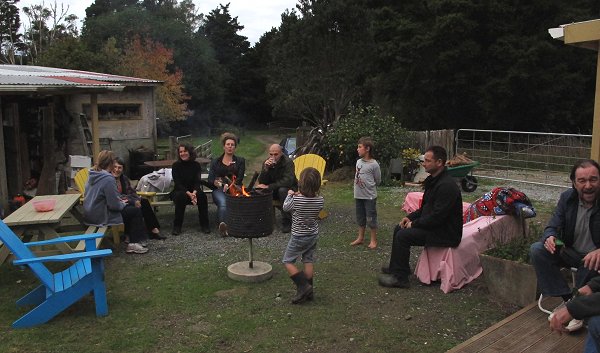 Family helpfully placed themselves around in sociable fashion as other people gradually arrived and were introduced to each other.

We find our parties quite fascinating, because we know a lot of really nice people, but many of them don't ordinarily come in contact with each other.  I suppose it's probably the same everywhere, but one has a different view of the process as the host. 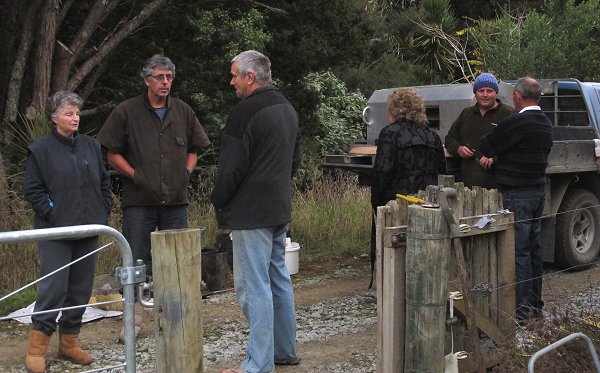 Sniff parked his ute on the farm track up beside the house, with the spit-roasting oven on the back, and unloaded his cooking gear for the vegetables.  He had been warmly invited to join us as a guest before we thought of engaging his catering services, but he kept to himself around the corner - although not without frequent company.

Dinner was delicious: the meat from our two sheep had been roasted to juicy, tender perfection, and the deep-fried Kumara and potatoes were crispy and golden on the outside and scrumptious.  There were a number of salads to go with the hot food, kindly brought by a few of the attendees or made by our house-guests.

Dessert included several different ice-creams from Stephan's selection, various cakes and fancy things and a delicious trifle Elizabeth had made. 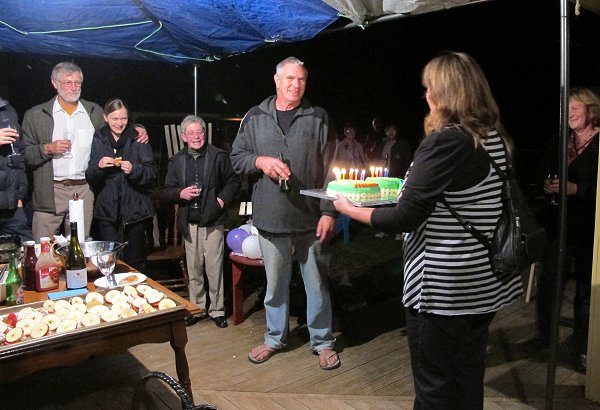 Stephan's cousin, Christina, had offered to secretly make the Birthday Cake, and we brought it out with candles ablaze after dessert. 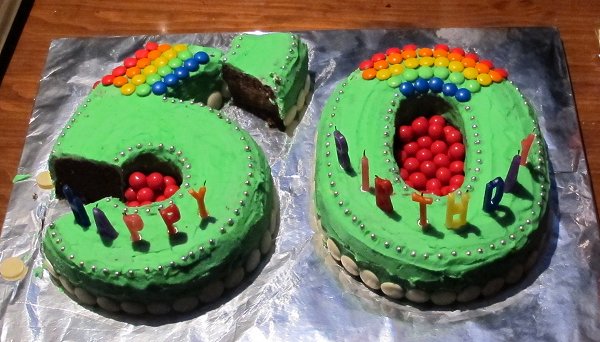 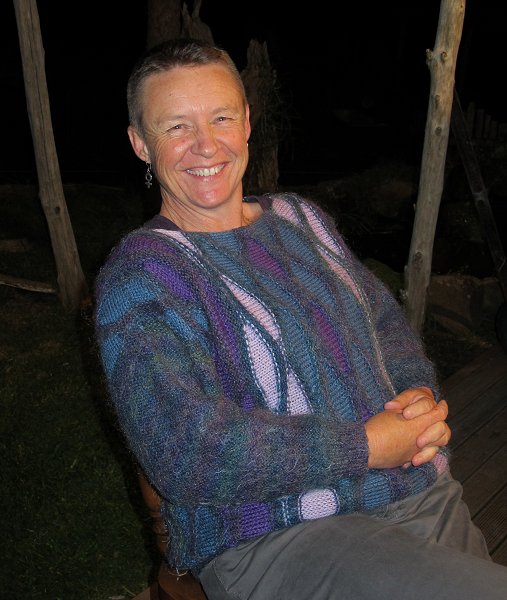 Gaye got hold of my camera and told me I had to be in some of the photos.

I think the old guy had a lovely Birthday.  Lots of people came to wish him well and he seemed to be having a really good time.  Some people insisted on bringing presents, which was very generous, albeit unnecessary, although some of them seemed to be aiming for a humorous response, playing on the pink theme of his choice of arm cast colour!  He now has a pink tool-belt and the box of survival gear for the over-60s from Elizabeth and William contained a significant number of pink things.  Jude hung a beautiful print on the wall and unveiled it with great flourish.  There were several bottles of liquor, including some particular favourites.  I gave him a library of books magically tucked away inside a little e-reader device and a couple of people bought him other books to read on it.

No doubt I've forgotten to mention important details, which I may have to fill in later. 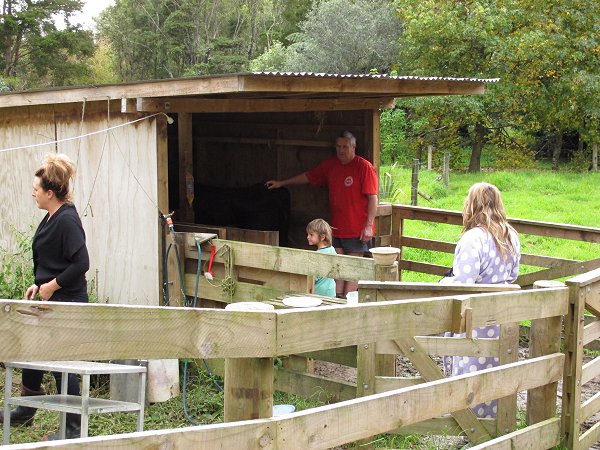 Ella milked Zella with an audience of those who were up early enough to watch.

I failed to take any photos of Ella with Stephan, but Michelle had her camera with her for the weekend and I hope she might send me some of her pictures.

After breakfast Stella and Ella set up a treasure hunt for Stephan, which he had to complete to find his present from Ella.  She had been earning money to buy him her own present: a very nice soup tureen with ladle.  I don't recall whether Ella has been here when Stephan has served soup, but on some occasions he's done so from a casserole, which he will no longer need to use, now having the proper serving dish.  It was lovely that Ella was able to be here for her Dad's birthday.

The resident members of my family gradually departed in the middle of the day and some of Stephan's family arrived as mine were leaving and Stephan whipped up a couple of pizzas for everyone.  All in all, it was a great weekend.

Several people failed to attend, so a warm welcome remains for those who wish to visit yet. 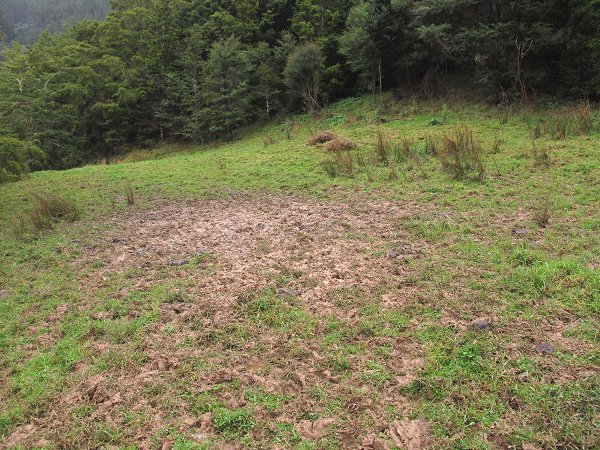 This might look like the result of the presence of a lot of pigs, but I believe it is more likely two or three cows have been frantically circling and attempting to mount each other here, being on heat.

I walked to the top of the Big Back paddock and then called the cows up to the Middle Back gate, observing a lot of muddy marks on the sides of a couple of cows and fatty 572 still obviously on heat, attempting to ride another cow as they emerged from the trees. 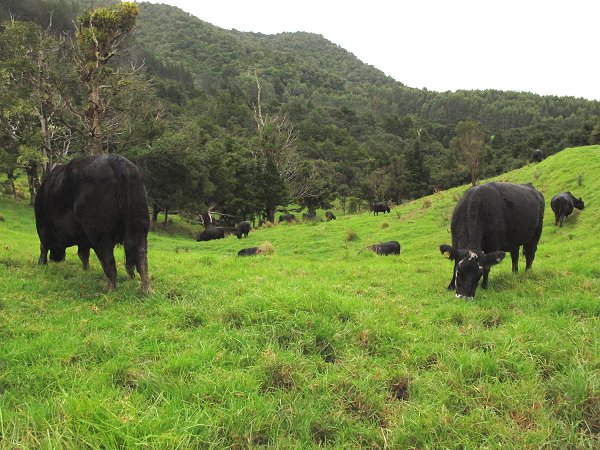 The Middle Back was lovely and green.  This picture is looking down the steep middle of the paddock - always hard to tell with a photo, I think.

The cows are in good order still, since there's still quite a bit of grass around, although it is slowing.  I'll have to start restricting some of them very soon.  I'll remove the young heifers to the yearling mob and may split a few of the thinner cows into a mob of their own as well - or feed them with the youngsters.  Madam on the left in this picture could obviously survive a lesser diet, whereas cows like 601 on the right will require a little more feed to healthily get through the winter.  I say "like 601" because 601 herself won't have to live through the winter, being on the cull list now I have her daughter who has tested clear of the NH she carries. 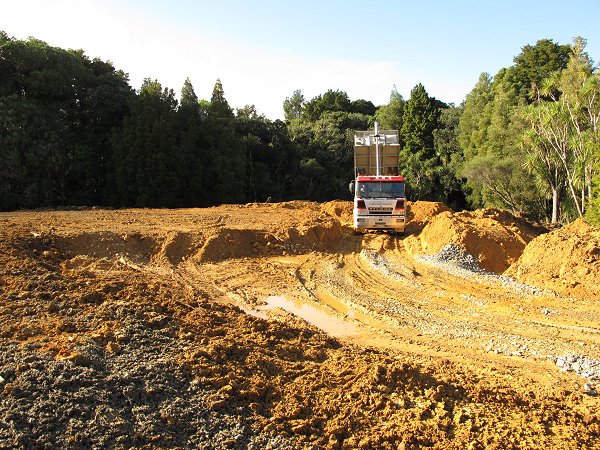 I don't really know what to say about this.  What a vast amount of earth. 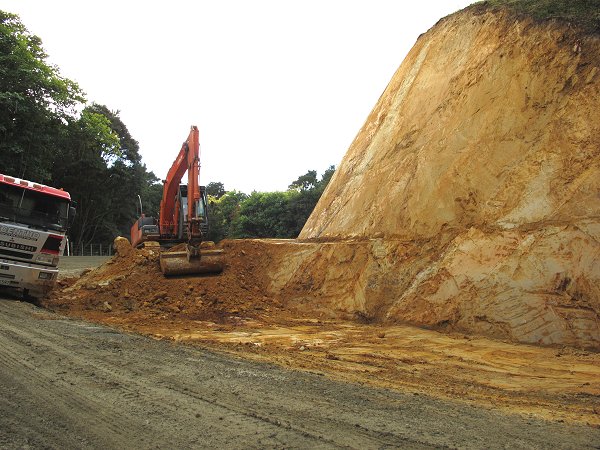 Work is progressing during a few fine days. 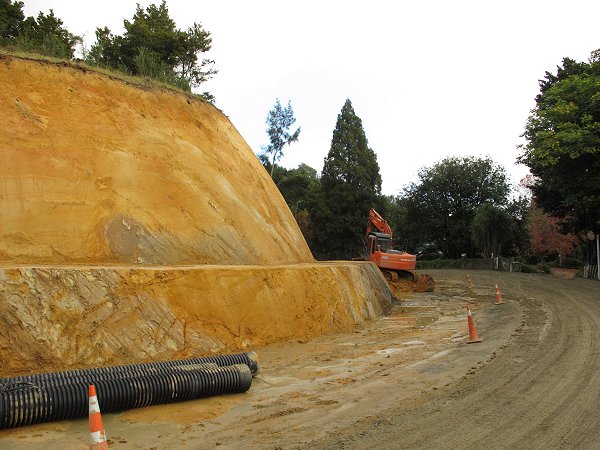 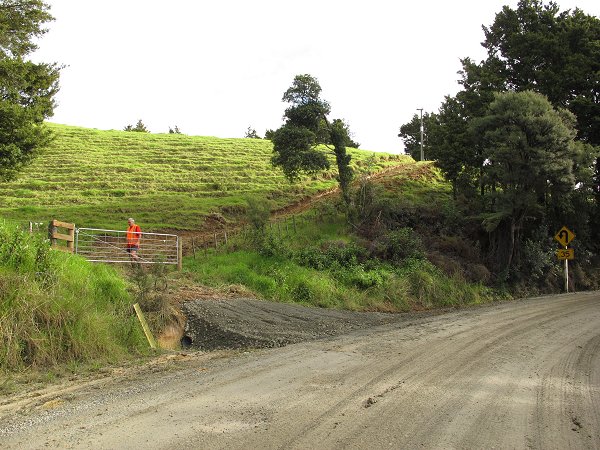 Various things were agreed to by the contractors and the Council when we were negotiating this project, one of which was the need for a gateway in our fence so that, on the original plan, the digger and other machinery could access the top of the hill.  When the plan was reduced, it was agreed the gateway would still go in because the fencer needs to get his tractor up the hill to replace the fence over the works area.  So we have a proper entrance and a new gate, which will enable us to get the fert truck or tractor up onto that part of the paddock next summer, where we've never yet applied any fertilizer.  We'll never use the gate for cattle movements, so it'll be chained and locked most of the time.

My lovely Aunt Joy, Jill's sister, died last week and her funeral was today in England at 12.30pm, 11.30pm tonight.

I first met Joy when I was eleven and sent to England on my own to meet my mother's family.  I stayed with Joy and Brian and their sons Martin and Christopher.  We met again when I went to the UK in 1988 for several months, and when Brian retired, he and Joy came to Aotearoa for a visit.  Joy came twice again on her own after Brian died, staying with us on one of those occasions.

Joy, like Jill and their parents, had Alzheimer's Disease, which had fortunately not advanced so far yet that she did not know herself and her family to the end of her life.  She was a nice woman and I'm glad I knew her. 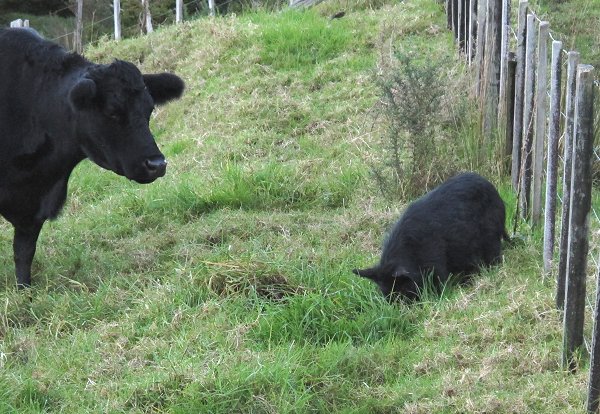 Walking up the Middle Back paddock from the bottom gate this afternoon, I noticed several of the cows heading up the hill and then clustering around something of interest: the black pig I saw the other day. 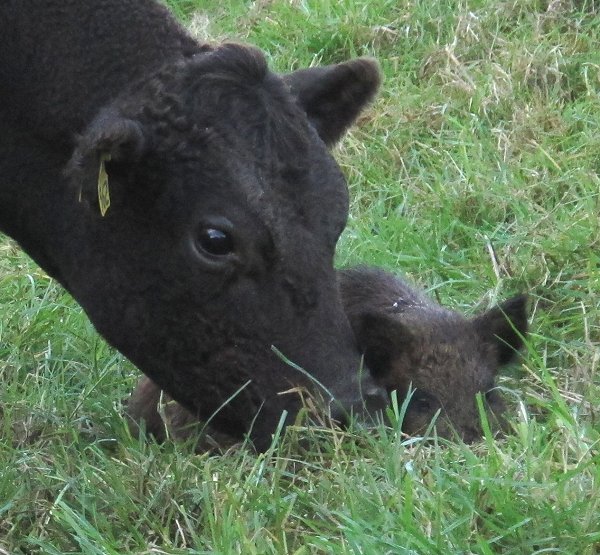 His friend, who I first thought must have laid down and died, was perhaps just resting.  Curly kept sniffing and licking it.

They're both big enough to make a few decent sized meals!

The little rabbit died this morning.  While I watched from the window it fell over, having mild convulsions, which worsened.  I went out and picked it up and held it as it died.  Presumably it had suffered more damage from being caught by the cat than I was aware.  It had been happily eating the lawn during the time it was in the cage, along with large amounts of grass brought from the longer-growing places.  It was only here a few days, but I miss it. 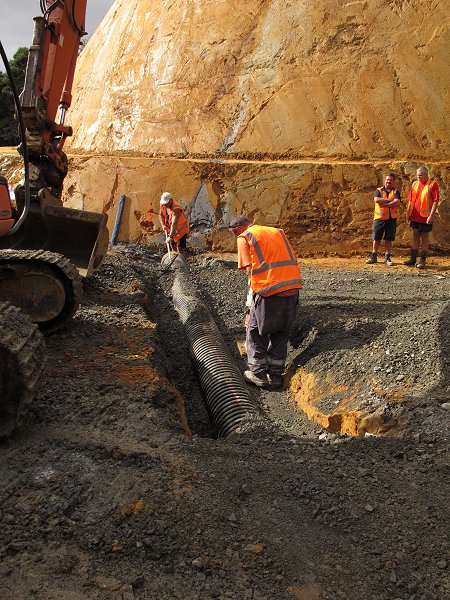 Back to the roadworks: the corner earthworks having been completed, it was time to lay culverts.  This one replaces an old shorter one.

I was standing on the one-lane bit of the road they'd already dug up.

The culvert sections are interestingly fitted together: a big rubber O-ring goes over the end of one pipe, which is then fitted into the wider lubricated cuff end of the other, if a culvert needs to be wider than one pipe allows.

We'd been giving Delroy a bit of a hard time (he's standing next to Stephan on the right) when he actually got into the hole to hold the pipe for a moment - doing some actual work.  Delroy's been my primary contact for the project, representing Fulton Hogan, who are the contracting company, and he's been charming. 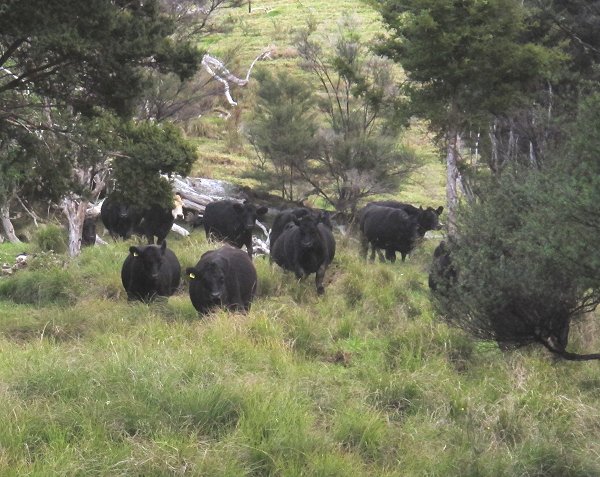 After moving the fifteen heifers from the Back Barn paddock, I called the 41 cows down from the top of the Middle Back.  It wasn't long before they came thundering down, in their usual alarming fashion - all except Irene 35, who took a lot longer than the others, with her sore feet.

Irene might benefit from having her feet pared back, but I'm not sure the problem is that serious - this soreness was set off when she was ridden by a hot cow as they progressed down the lane four weeks ago.  I saw it happen and feared for Irene's feet, since she's prone to this problem.  I still think the problem is mostly due to the state of her immune system (due to the constant work of dealing with Neospora) and its ability to deal with minor hoof damage. 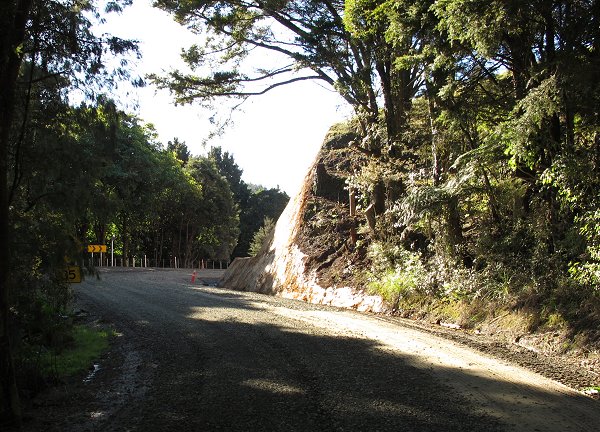 The corner, finished.  Cracker is still up the road on the digger, flattening out the dump site.  It looks quite different!
I think it will be alright; I hope so.

The guys on the job have been lovely to deal with.

I'm not convinced the Council has done the right thing in regard to cutting back the plan, because we all think the bank will slip badly and therefore cost more money to fix up, which was something Stephan and I, as ratepayers and participants in the job, wanted to avoid.  But it is what it is ... for as long as it lasts and we're taking bets on how long that will be!